After getting a taster of Amani Spas at the SLOW Lounge at OR Tambo International a few months ago, I went for a more extensive pamper session to the luxury Amani Spa at the Radisson Blu Sandton this weekend. Now, there are spas and there are spas and the very fact that Amani Spas can only be found at the most exclusive lodges, hotels and venues already had me expecting more from it than the average spa…and I was not disappointed. The name ‘Amani’, itself means ‘peace’ in Kiswahili and that is what I was looking for.

I was welcomed to the spa and shown to the change rooms where I was given a luxurious gown and slippers to change into. Once I was comfortable I was taken to the relaxation room where I was offered iced tea while I waited for my therapist. Sitting in this relaxation room was like a spa treatment on its own. It had comfortable loungers in a calming green shade surrounding a heated vitality pool.

However. the most striking features are the floor-to-ceiling windows which offer some of the most spectacular views of Johannesburg that I have ever seen. I was wowed the moment I entered it and could have relaxed there for hours, just admiring the views.

My therapist then came to escort me to the Salt Room for a salt therapy session. Based on the salt caves and spas that originated in Eastern Europe more than 200 years ago, the Amani Spa Sandton is the first spa in Africa to boast a Therapeutic Salt Room. It is a room covered from wall to floor in mineral salt.

At first glance, it looks like beach sand on the floor but a closer look reveals it to be salt. The purple lighting in the room combined with the serene background music created a mellow and calm ambience. They also double as sound and light therapy! I felt like I was relaxing on a beach miles away and could have fallen asleep if I wasn’t so busy chatting to my husband who had joined me there.

Salt therapy is a drug-free remedy for several ailments including allergies, asthma and sinusitis and it is safe for children too. One Salt Therapy session lasts for 40 minutes and eight sessions are recommended to treat ailments.

When my salt therapy session ended, I was taken to a treatment room for the Amani Signature Kurhula Body Ritual. This treatment combines different massage techniques and styles from all over the world and includes an express facial. I lay there for 90 minutes, lulled into a semi-comatose state while my knots, aches and stresses were rubbed, kneaded and massaged away.

This was just what I needed after my stressful week. I left there feeling relaxed and recharged. Of course, I had to spend some more time admiring the views from the relaxation room before I left the spa. Fortunately I didn’t have to go too far as I was spending the night at the hotel. 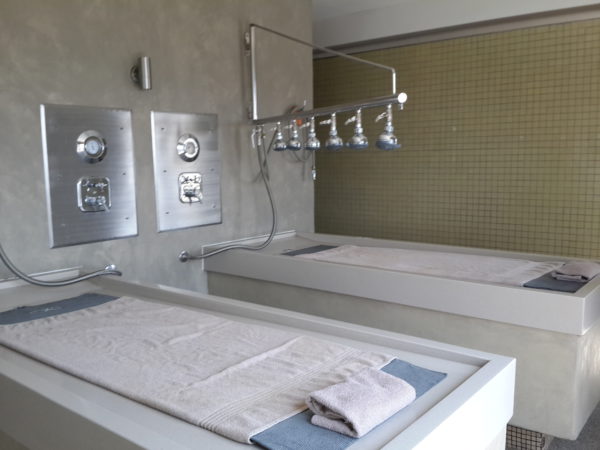 The Amani Spa offers several other signature treatments including the hydrotherapy journey, which is a seven-step process. It also boasts other state-of the art facilities such as Vichy and sensation showers, a sauna, steam room, and beauty salon. Meals and refreshments are also available on request.

The spa is located on the 10th floor of the Radisson Blu Sandton Hotel. Corner Rivonia and Daisy Roads, Sandton. (Not the Gautrain Radisson Blu).

Update: The Amani Spa has been rebranded to The View Spa Sandton

See here for more things to do in Johannesburg.