On top of the world at the Burj Khalifa 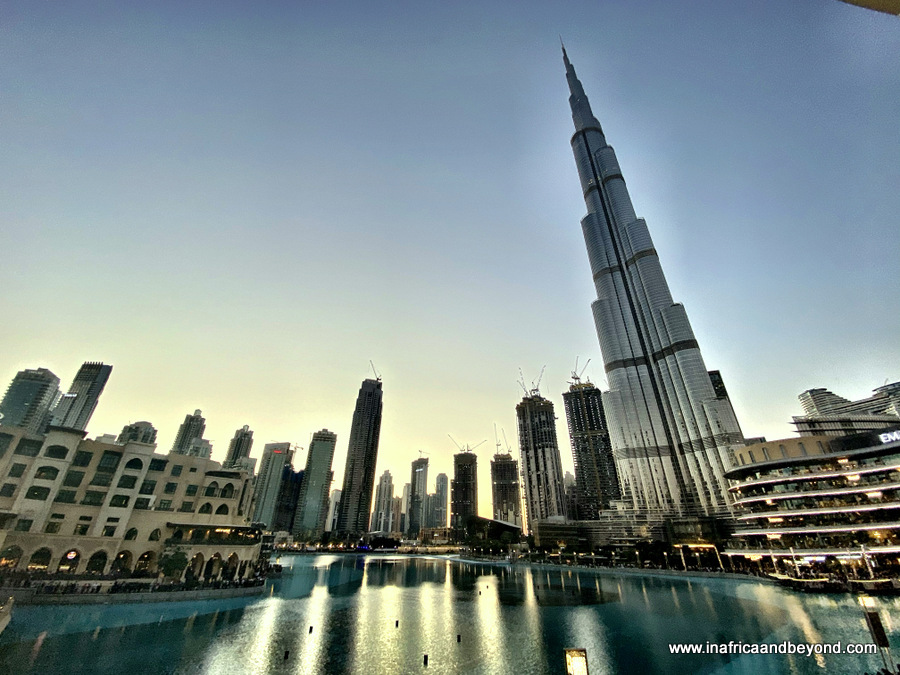 A visit to At The Top Burj Khalifa

Often described as a ‘Vertical City’ and ‘A Living Wonder’, the Burj Khalifa has held the title of the tallest building in the world since 2010. Rising gracefully from the desert, it is 828 metres high, more than twice the height of the Empire State Building. We visited At The Top Burj Khalifa . 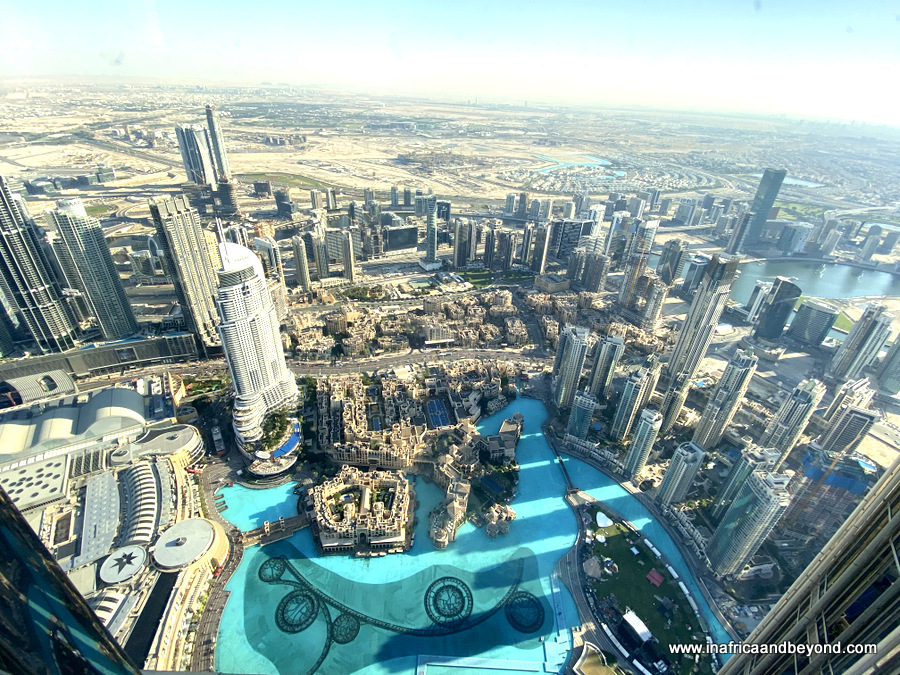 At The Top Burj Khalifa

… and that’s not the only record it holds. The skyscraper is also the world’s tallest man-made and free-standing structure, it has the world’s highest occupied floor (Level 160) and swimming pool (Level 76), and the tallest service elevator. The world’s highest lounge is on Level 154.  The observation decks are on the 124th, 125th and 148th floors, with the latter being the tallest observation deck in the world open to the public - although it isn’t close to the peak of tower, due to the building's tapering form. 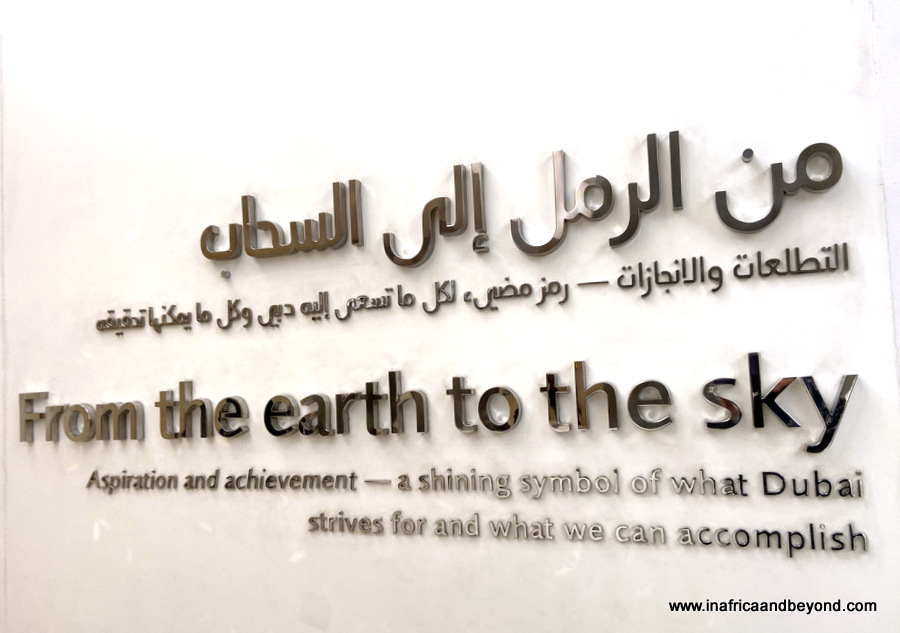 Home to residences and offices with some of the world’s most prestigious addresses, the Burj Khalifa is likewise famous for the spectacular LED displays on its façade, especially on New Year’s Eve. It has been featured in movies like "Mission: Impossible - Ghost Protocol" and "Independence Day: Resurgence". 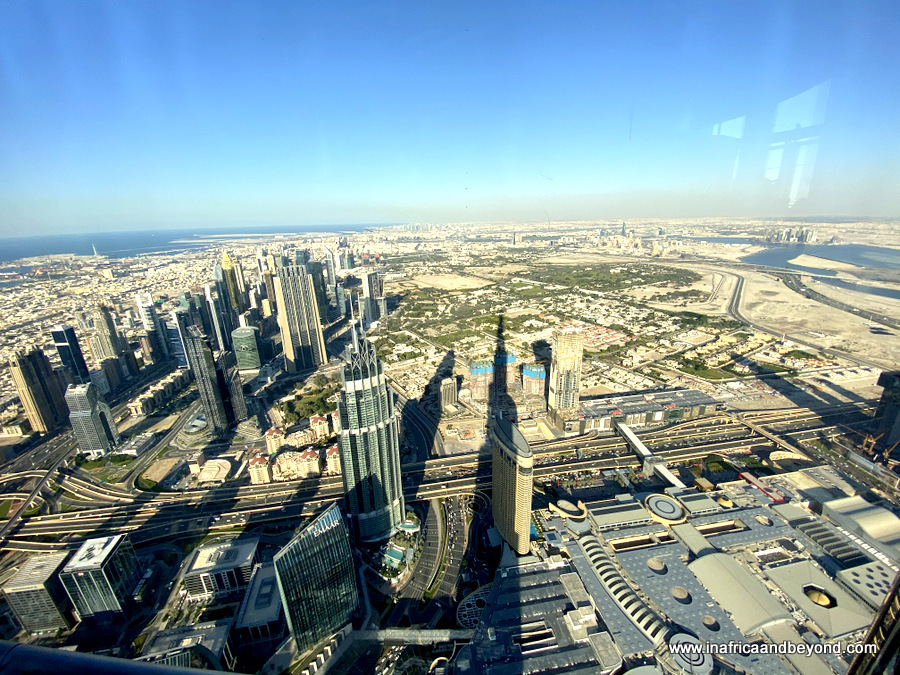 View from The Top

My family has a penchant for seeing the views from tall buildings, so ascending the Burj Khalifa was high up on our Dubai bucket list. We entered the Dubai Mall, the largest mall in the world and followed the signs to the counters of "At The Top Burj Khalifa", which are on the Lower Ground floor.

There was a long queue waiting to get in. I asked the hostess if it was an especially busy day, and she replied that it was always like that, as the tower was the top attraction in Dubai -no mean feat in a city of superlatives. Indeed, the Burj Khalifa is ranked as the top attraction in Dubai on Tripadvisor. This is followed by The Dubai Fountain and The Dubai Mall, which are both within the same complex. 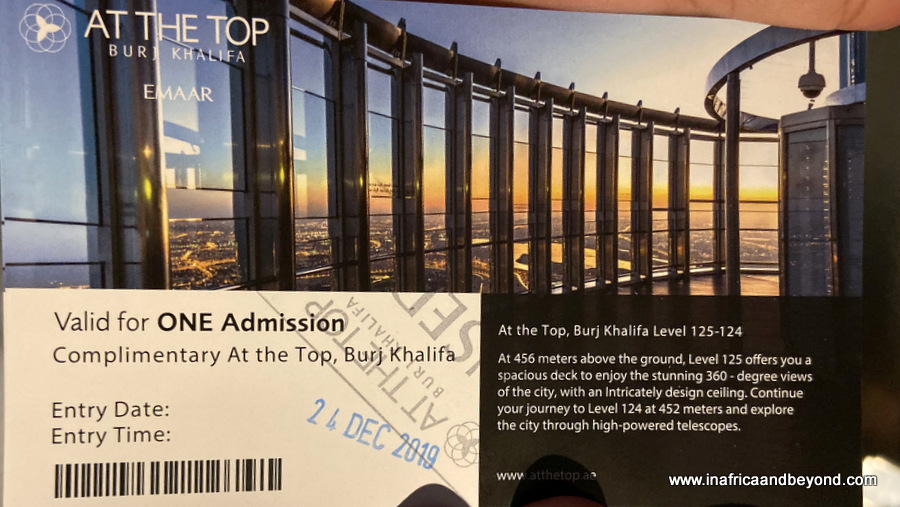 Once we had collected our tickets, we proceeded through the speed gates, where a photographer took family photos of us. A social media wall encouraged fans to post their experience photos. We passed an illuminated model of the skyscraper. As we continued towards the elevators, historical photos and clips from the construction phase between 2004 and 2010 lined the walls of the hallway and kept us informed and entertained as the long queue snaked forward. 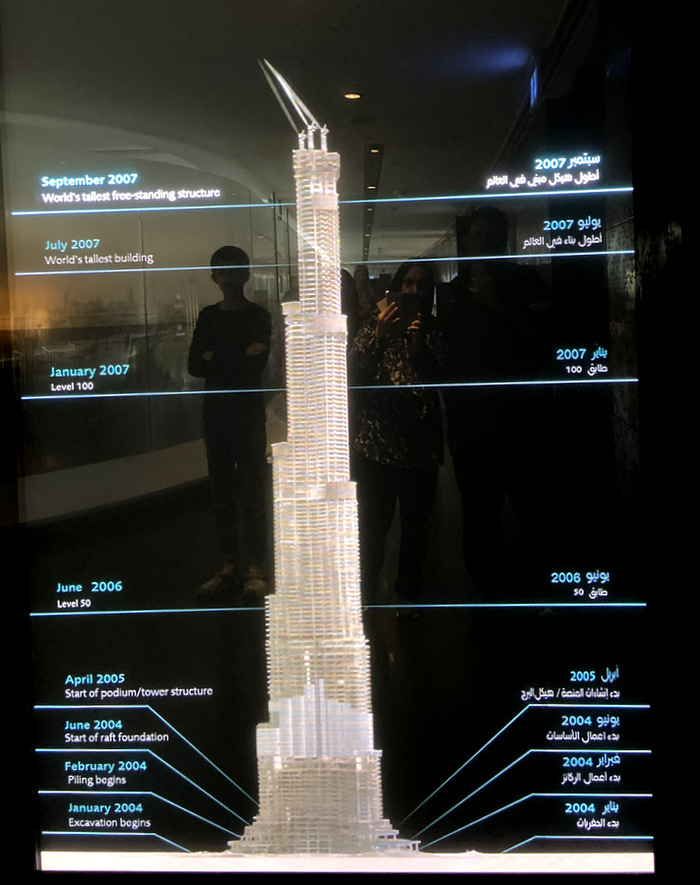 At the waiting area for the elevators, we watched the display screen on the doors rapidly flash the floor numbers as it sped up and down. Eventually, it was our turn. The doors closed behind us and we shot up 124 floors within 60 seconds, in one of the fastest elevators in the world. The audio visual displays treated us to more information within the elevator, and before we knew it, we were on Level 124. 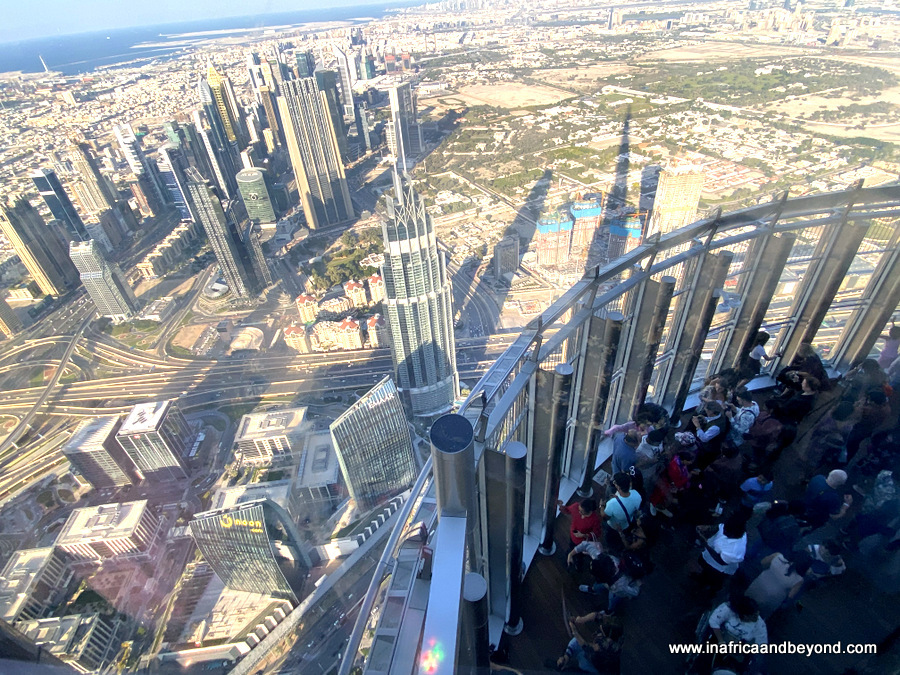 We walked around the glass-enclosed deck , enjoying the views of Dubai’s iconic buildings and skyline, and the sea and the desert beyond. Then we proceeded to Level 125, which gave us views from different angles. Avant-garde, high powered, viewfinders enabled close-up views of distant landmarks.  On a clear day, you can see the faint outline of Iran on the other side of the Persian Gulf. 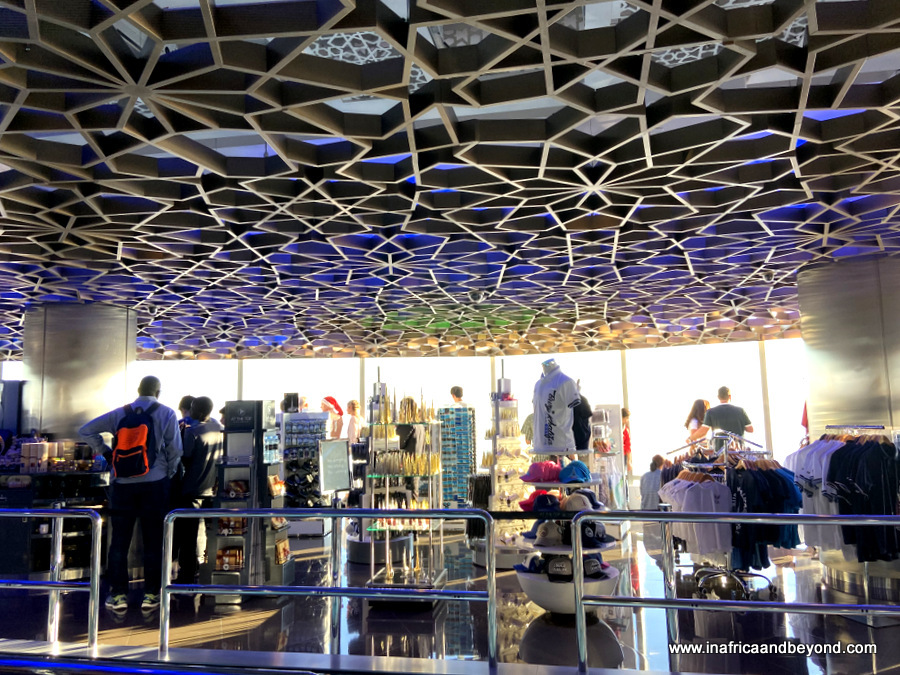 Level 125 also has a cafe and a gift shop where you can choose your favourite souvenir as a memento. There are t-shirts, fridge magnets, glass ornaments, books and all sorts of other items. Photographers are on hand to take the perfect photos of you on top of the world for Instagram. An inspired glass-floor that “cracks” underneath your feet provides an immersive experience while VR machines provide more interactive experiences. 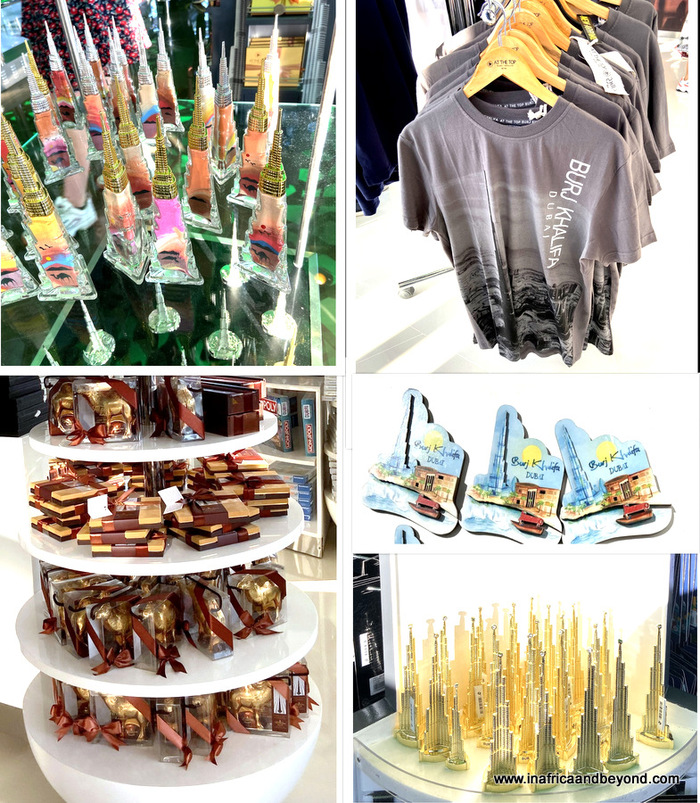 We spent over an hour enjoying the views from the top before we made our way back down again, in time to see the popular Dubai Fountains. Ticking the tallest building in the world off our bucket list was a brag-worthy experience, and one I would definitely recommend, unless you are acrophobic. 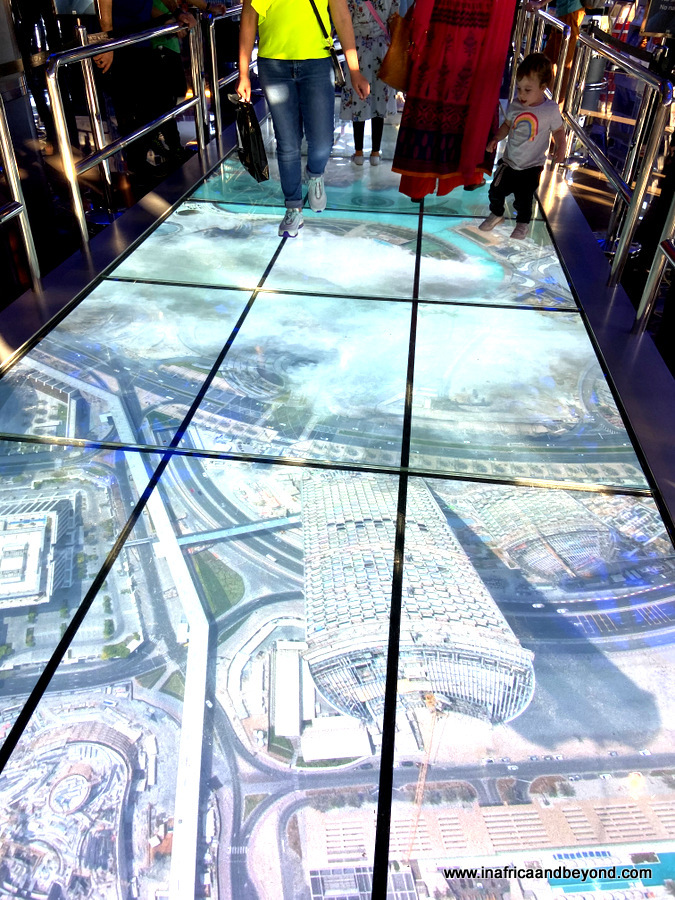 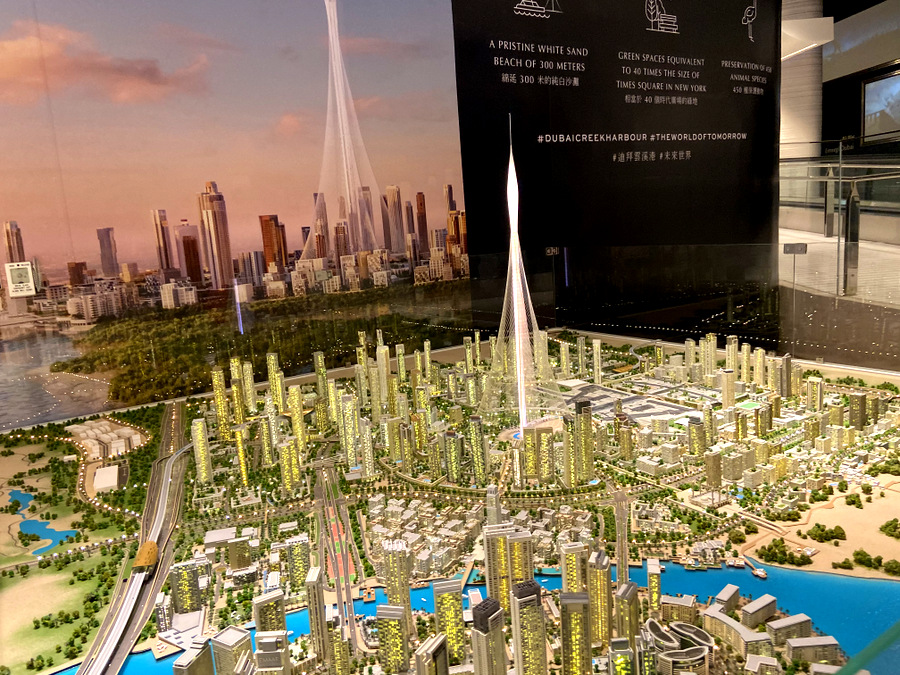 For more information, visit At The Top Burj Khalifa or book your tickets here.

Have you been to At The Top Burj Khalifa ? Would you like to go there?

See things to do in Dubai. 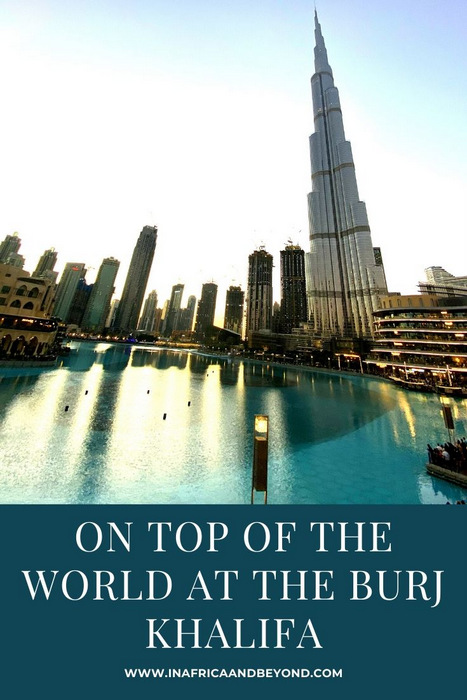