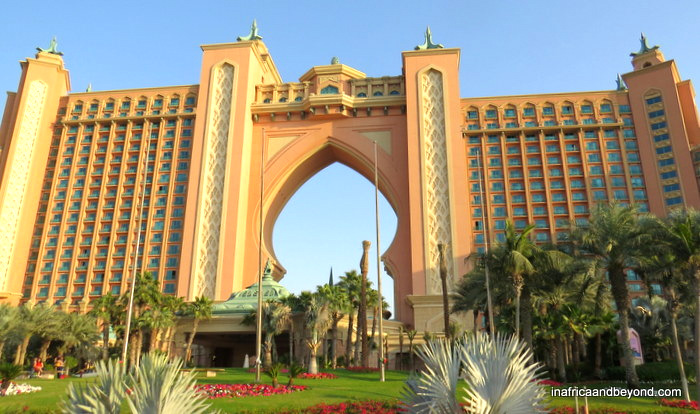 We were on the upper level of Neptune Tower, a Mayan-temple styled tower housing a multitude of thrilling rides. Hearts thumping, we sat in double tubes and plunged down the long, winding water slide. Before we knew it, we were surrounded by sharks, stingrays and other marine life. Fortunately, they were enclosed within the transparent walls of the aquarium through which our water slide plunged. We emerged into the sunlight, in high spirits, ready to take on more rides. We had just conquered “The Falls”.

We were spending the day at Atlantis The Palm, one of the most recognisable symbols of Dubai. It occupies the furthest tip of The Palm, a man-made palm-shaped island, and one of the most exclusive areas of Dubai. We had seen Atlantis in hundreds of pictures, and we had seen it on television shows. We had even seen it from our plane as we flew over Dubai. It was great to finally be there. 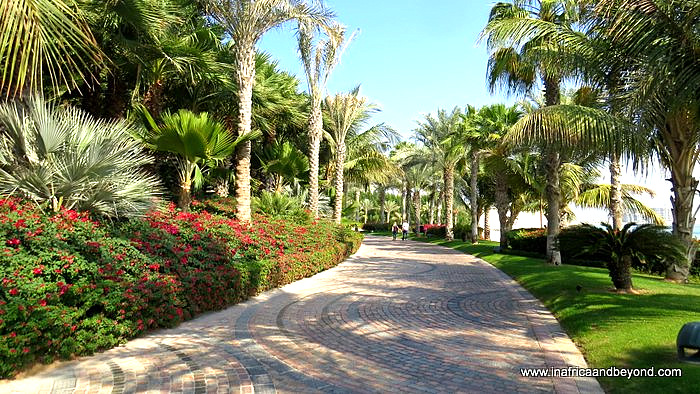 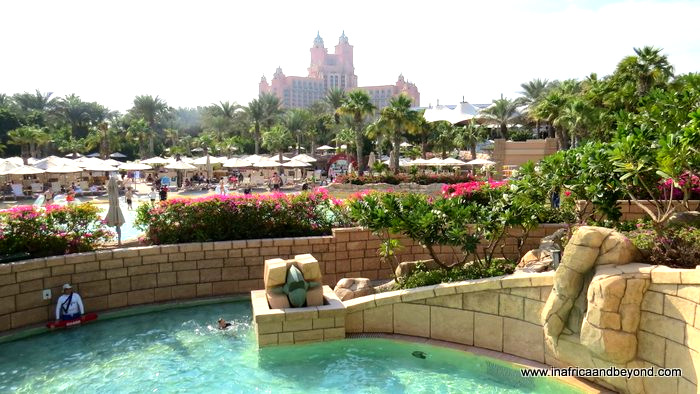 We were given wristbands, which activated the lockers for our valuables, and vouchers to redeem for towels. There were helpful staff members all over Atlantis and beach buggies took us from one attraction to the other. Empty sun loungers were easy to find too, even though the park was getting progressively busier throughout the day. 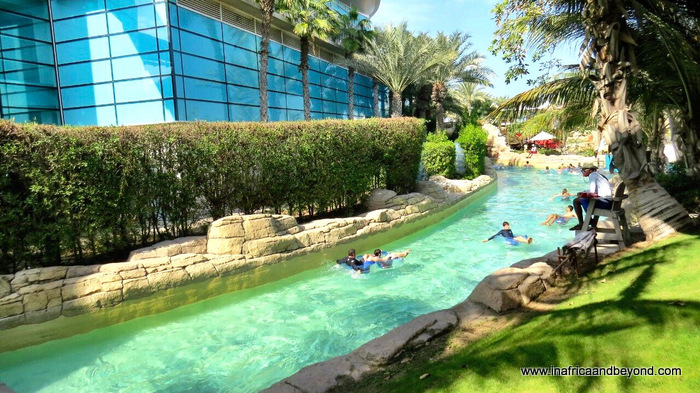 There are two towers of water coasters, Poseidon and Neptune, as well as a long lazy river with rapids and wave sections. The Tower of Poseidon contains family rides like Zoomerango and Aquaconda. We sat in inflatable crafts holding 6 people, then went floating down serpentine water chutes with sudden twists and drops, which drenched us before we reached the end. It also contains Poseidon’s Revenge, which encloses users in Perspex capsules, then drops them through an unexpected trap door in the floor at 60 km/hour. 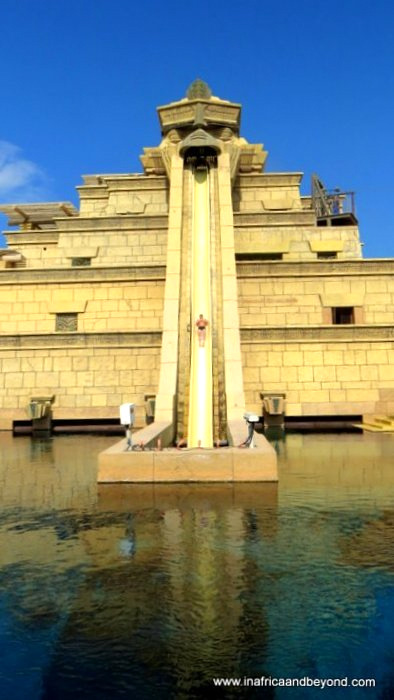 The Tower of Neptune is home to several rides that go through the aquarium at different levels of fearsomeness. As the name suggests, the most daring one is the Leap of Faith, where one is hurtled almost vertically down a water slide 90 feet high which then shoots through the shark tank. I must admit that I was not brave enough to attempt the Leap of Faith or Poseidon’s Revenge, although I did experience several others.

Fans of Amazing Race may remember an episode from a few years ago, where a couple gave up their dream of winning a million dollars because one of them didn’t have the courage to take the Leap of Faith. My kids did it though, and thoroughly enjoyed it. 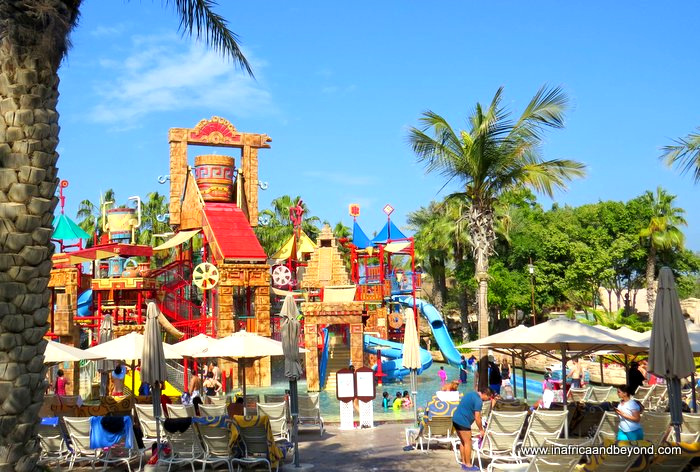 The rides at the Towers of Neptune and Poseidon are only for those over 1.2 metres tall. As my kids met the height requirement, we spent most of our time there. But there are other attractions for smaller children, like the Splashers Kids Play area with its giant water buckets, fountains and mini water slides. Atlantis The Palm also boasts the longest zipline in the Middle East. After all the excitement, we spent some time relaxing on the beautiful, tranquil beach. 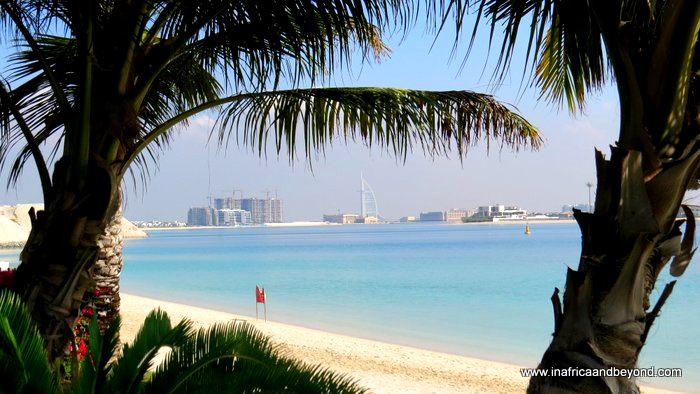 By now, we had worked up an appetite, and we were looking forward to lunch at Gordon Ramsay’s award-winning Bread Street Kitchen, especially since we had been watching his cooking shows for years. We entered the British-styled restaurant and were led to the garden seating where we were presented with menus. My kids were given kiddies menus, although they opted to eat from the main menu.

Everything sounded delicious and we had a hard time deciding what to order. The friendly staff helped us by recommending an assortment of dishes, including the Wagyu beef burger, the signature dish Beef Wellington with truffle mash, Lobster Pasta, Wood Oven Baked Prawns, and a selection of starters and desserts. The food was amazing and the ambiance was informal and relaxed. 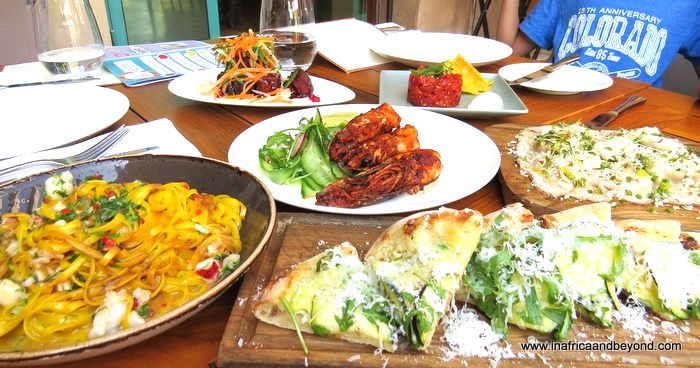 Atlantis’ slogan is “A world away from your everyday” and it really is a welcome escape from the mundane routine of everyday life, liberating and exhilarating. 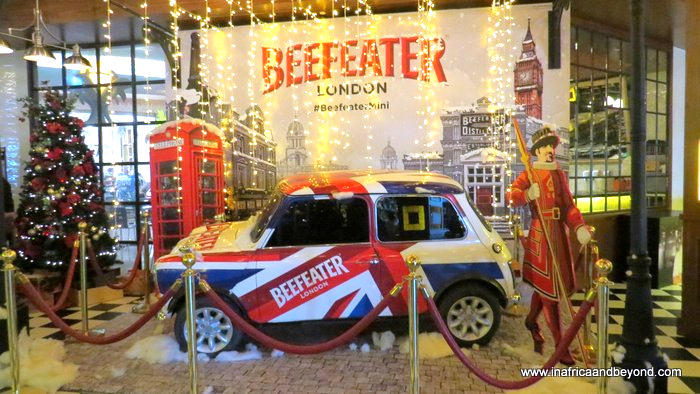