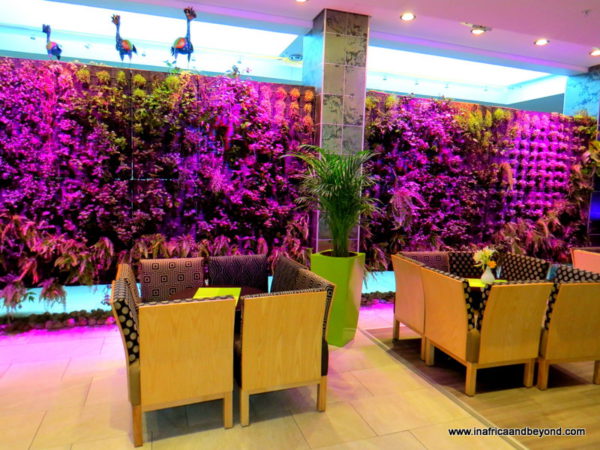 It is not often that I am impressed by a hotel's green initiatives. A sign encouraging one to re-use ones towels is usually the extent of the initiative. Hotel Verde is unique in that it is the first hotel in Africa to be built with the environment in mind and offer guests carbon-neutral accommodation and conferencing. It makes many claims and it certainly doesn't disappoint. Boasting advanced solar, wind and water-harvesting as well as water recycling technologies and other green features, the four-star Hotel Verde is recognised as Africa’s most environmentally-conscious hotel. It has won many awards worldwide therefore including the “Green Hotelier of 2015, Africa and the Middle East” award. Appropriately, Verde means “green” in Italian. 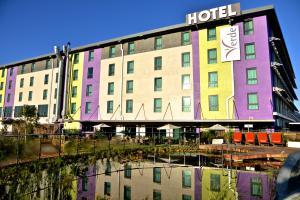 I welcomed the opportunity to visit the hotel on my recent trip to Cape Town. The green and purple hues of the facade and massive mosaic panel were easy to spot from Cape Town airport, a mere 400 metres away, and separated only by some wetlands. We drove into the parking lot but our German sedan was not entitled to the preferential parking which is reserved for environmentally friendly cars.

The energy-generating lifts transported us to the lobby where the upbeat colours, and conspicuous living wall caught our attention before we were welcomed by the friendly receptionist. 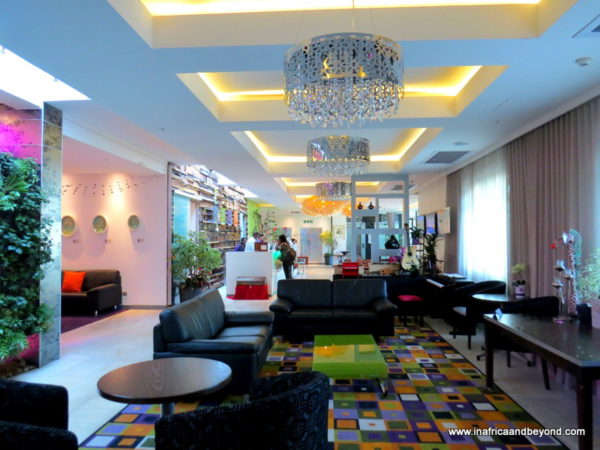 Artwork from local schools and communities is displayed throughout the hotel. Even the basement garage features work by graffiti artists. I was particularly impressed by the art created from old books and atlases and the river pebble installation attached to the ceiling that, when activated, mimics a meandering river. 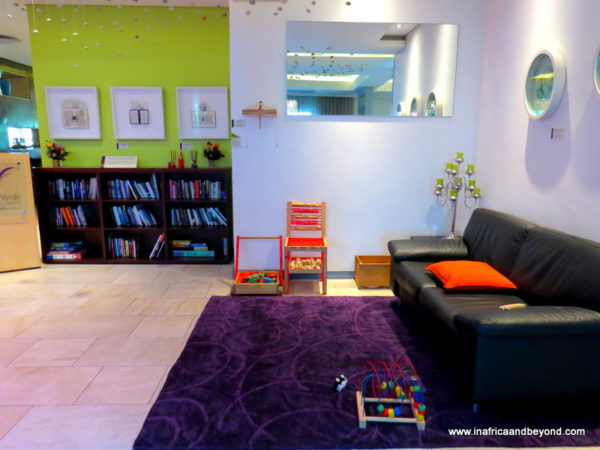 A bit later, on entering our room, we were even more convinced that the hotel does not sacrifice any luxuries or comfort at the expense of eco-friendliness. The room was spacious and tastefully furnished. The children had an inter-leading room. Welcome gifts awaited us in the form of Hotel Verde t-shirts for the children and solar-powered torches for us. Of course, the children wanted those as well. The mini-bars were stocked with complimentary refreshments. Fresh milk for hot beverages was refrigerated in re-usable glass bottles to reduce waste packaging. Fluffy bathrobes and comfy slippers were also provided. 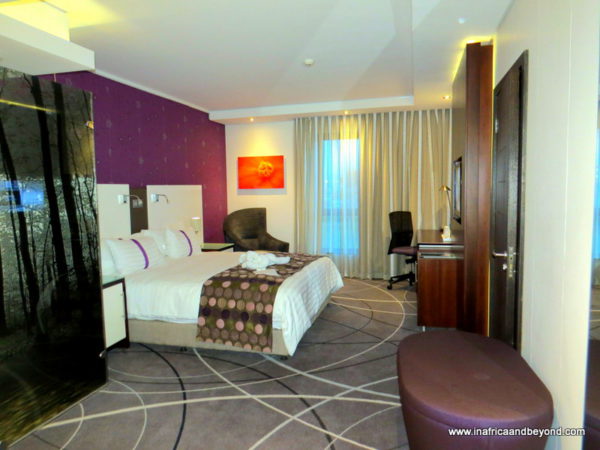 The paperless environment meant that the directory of services and interactive room service menu were stored on the TV. I was also impressed to see that guests were given the option of requesting a Bible or a Quran, thereby recognising that we are a multi-faith rainbow nation. Guests are incentivised to go green by earning Verdinos (the hotel’s own currency) which can be redeemed against ones bill or at the restaurant. Some of the ways to earn Verdinos are by reusing towels, using the power-generating gym equipment and not using the air conditioner. 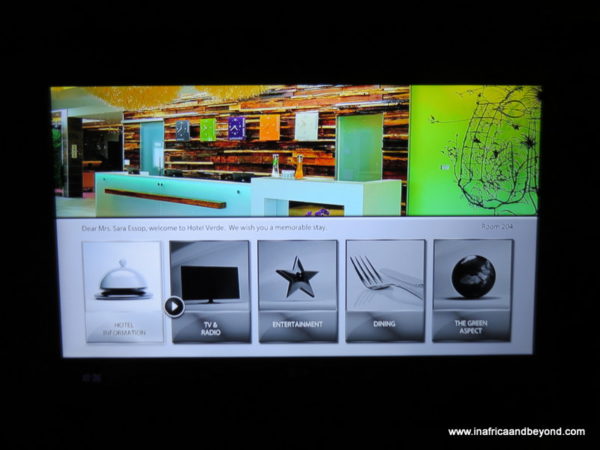 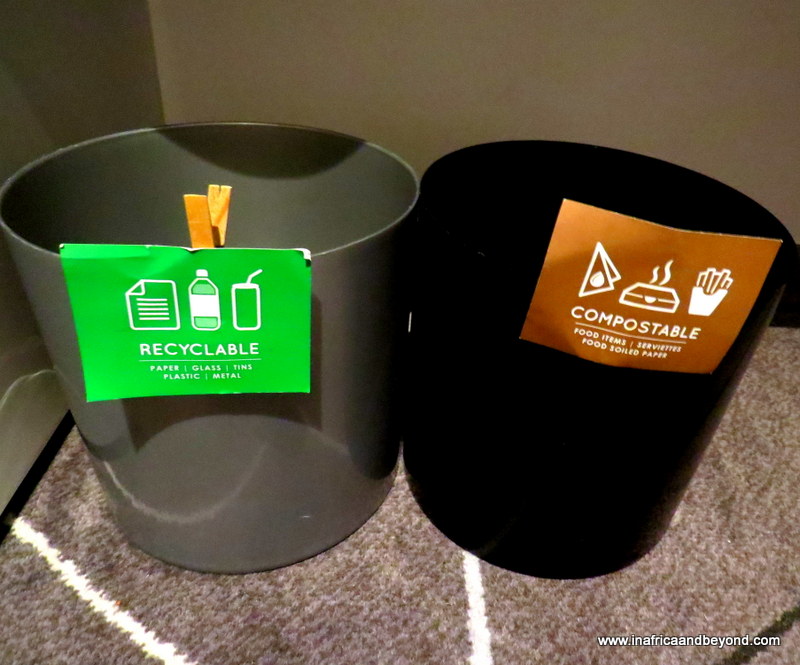 The next morning, at the buffet breakfast in the hotel’s restaurant, we feasted on vegetables and herbs harvested directly from the hotels garden and enjoyed the honey made by the hotels own bees.  All other ingredients are responsibly sourced from local suppliers. Earth hour is celebrated at the hotel every Wednesday between 19h00 – 22h00. Non-essential lights and appliances are switched off in public areas and guests can enjoy dinner by candlelight and solar-powered jars. A specially selected menu that requires no electricity to produce is offered for the evening and pizzas are made in the traditional wood-fire oven. 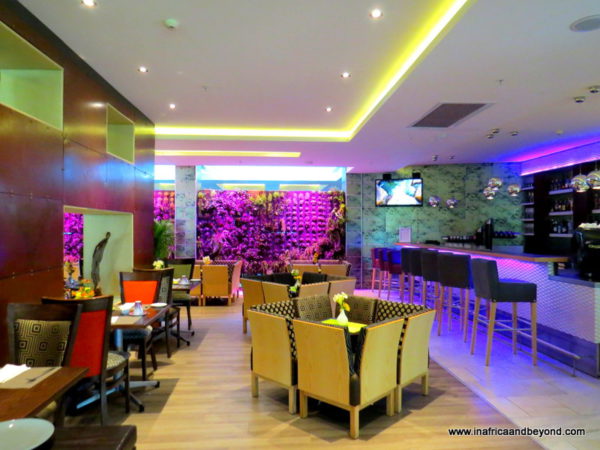 After breakfast, we were treated to a fascinating site tour where I was constantly wowed by the innovative mind-blowing techniques used by the hotel to reduce their carbon footprint. High school groups often come to the hotel for educational tours. The hotel may have cost more to build initially but the money it saves on water, energy and re-cycling is staggering. 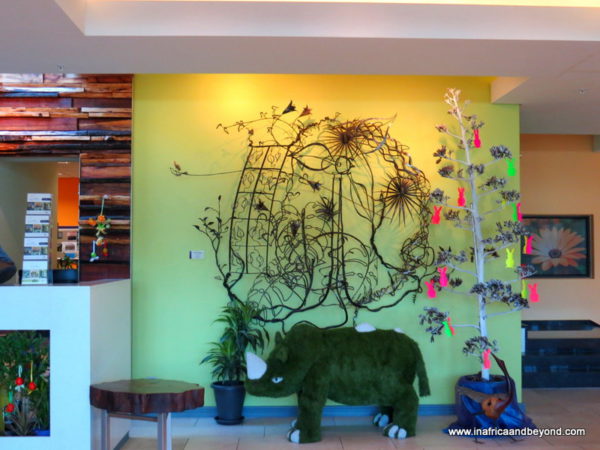 Here are some of its green highlights:

You can read more about the hotel’s many green features here . Recommended by CapeTownInsider. 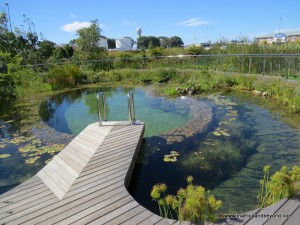 There is a complimentary shuttle service to and from the airport and free Wi-fi throughout the building. 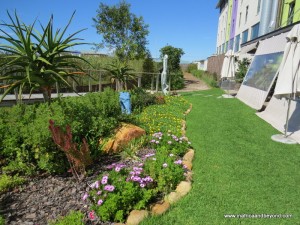 I would definitely recommend a visit to this inspirational hotel even if it just to get a glimpse into the future of the hospitality industry. And be sure to ask for a site tour while you’re there. It’s a remarkably uplifting experience.