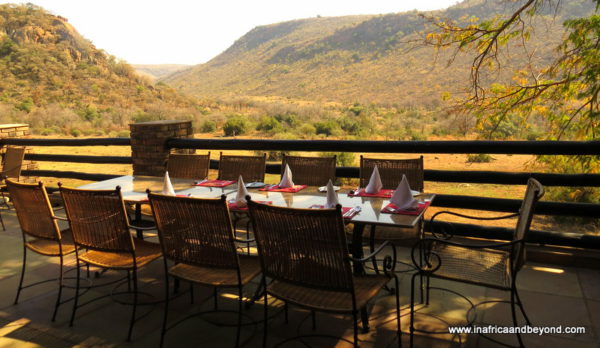 It is said that construction on Kwa Maritane began centuries ago...The lodge is built on the slopes of an ancient volcano in the area now known as Pilanesberg Game Reserve and is overlooked by huge granite boulders. 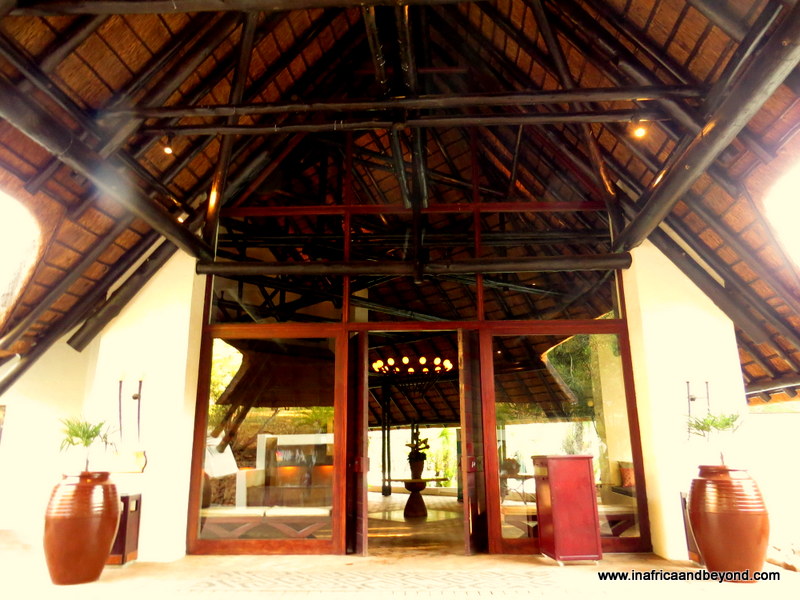 I had been to the reserve for day visits before but had never stayed there. According to recent polls by the South African Tourism Board, the 55,000 hectare, malaria-free Big 5 Pilanesberg Game Reserve is now the most popular game reserve in the country. Hollywood star, Arnold Schwarzenegger, recently visited the reserve for a game drive and was fascinated by his experience. He even posted a video about his encounter with an elephant on his Instagram account. 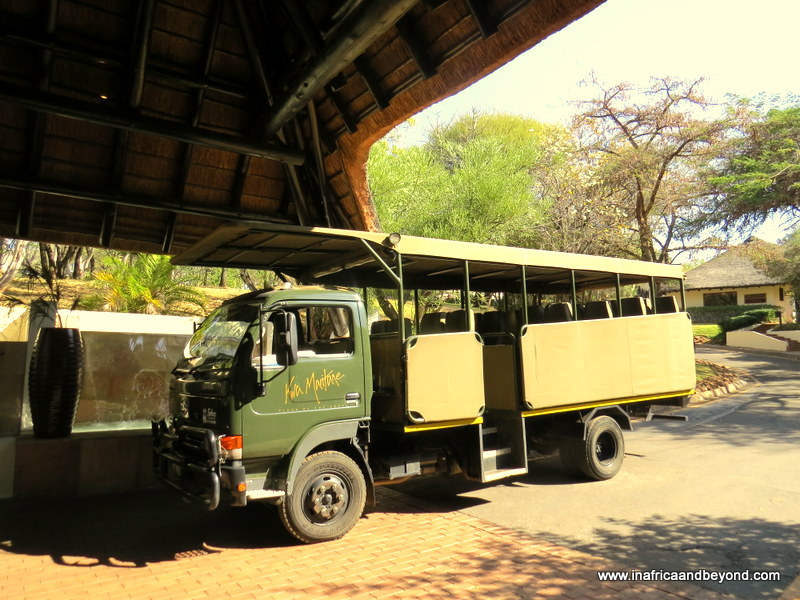 Just over two hours away from Johannesburg, it is located next to Sun City. Kwa Maritane guests often go there for the day on the hotel shuttle, and Sun City guests often visit Kwa Maritane for some peace and tranquility amid nature. 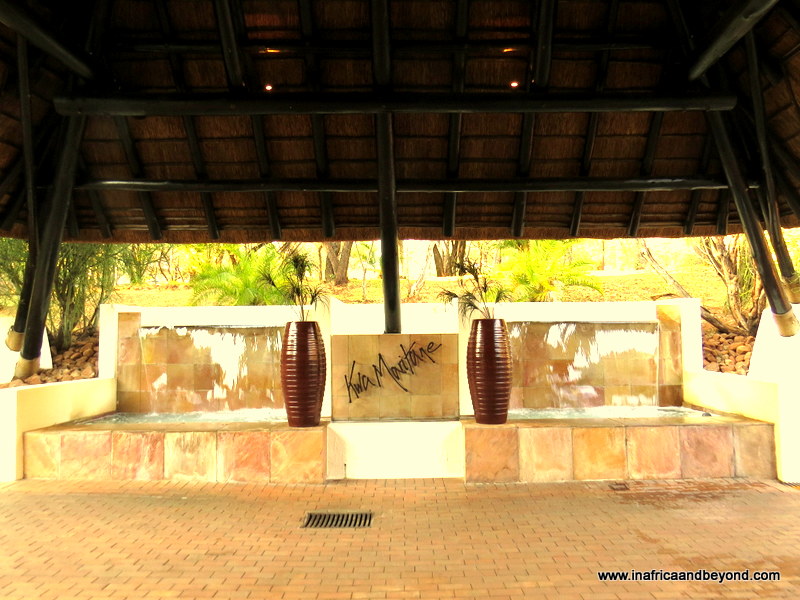 Set amidst spectacular scenery, Kwa Maritane is quite large for a bush lodge. With 90 hotel rooms, some self-catering chalets with private plunge pools and a host of entertainment activities, it feels more like a resort than a bush lodge. It is part of the prestigious Legacy Hotels Group, which also owns two other lodges in Pilanesberg – Bakubung Bush Lodge and Tshukudu Bush Lodge. You can earn Legacy Rands on your stays at all these lodges which you can spend at their other partners. 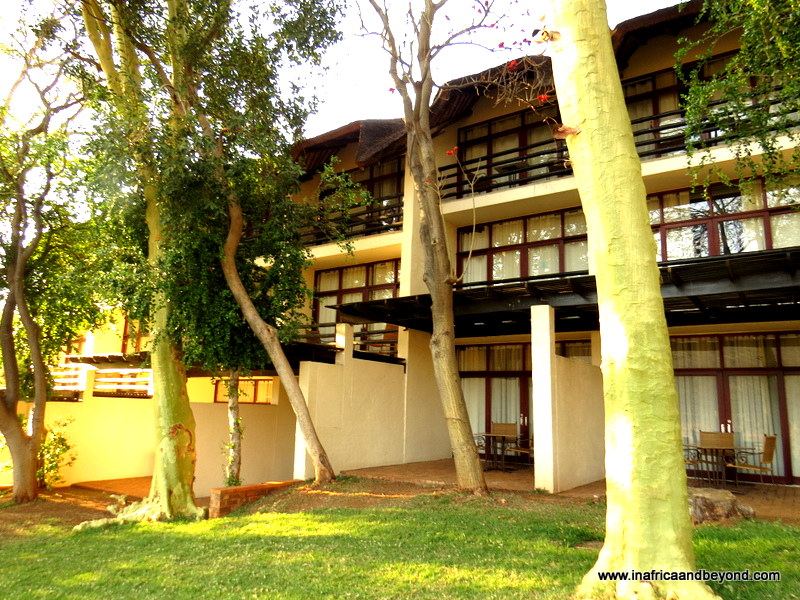 Our family room was spacious and had two double beds and a sleeper couch in the lounge area as well as a small balcony shaded by huge trees. Thatched roofs and stone floors complemented the wooden furnishings and warm decor. The en-suite bathroom had a bath and a shower and very generously-sized amenities. 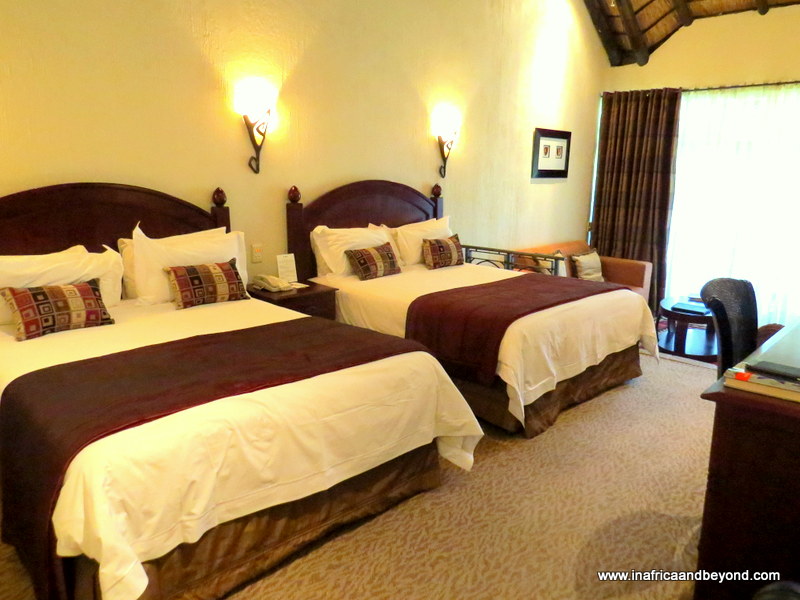 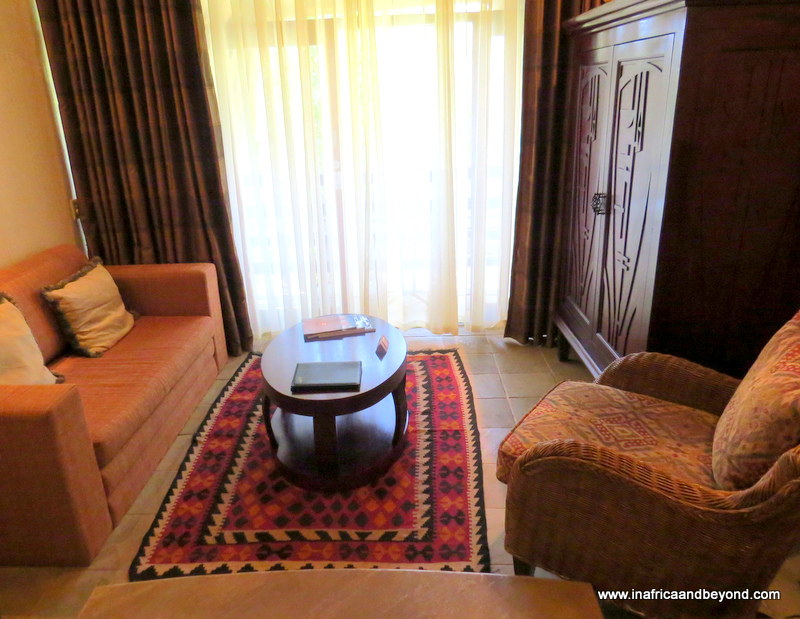 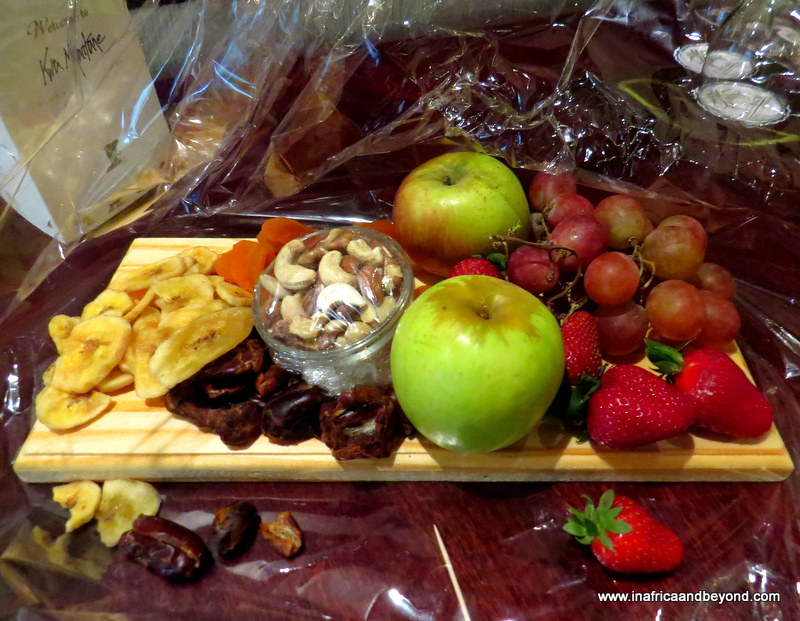 The resort has more than enough facilities and activities to keep the adults and more importantly, the kids, occupied. They include floodlit tennis courts, outdoor chess, huge swimming pools, a putt-putt course, a climbing wall, a gym and a spa, a curio shop and a children’s playground. Guided bush walks, bird and tree trails, and star-gazing activities are offered and there is a junior rangers program for the kids too. One could easily spend a week there without getting bored. 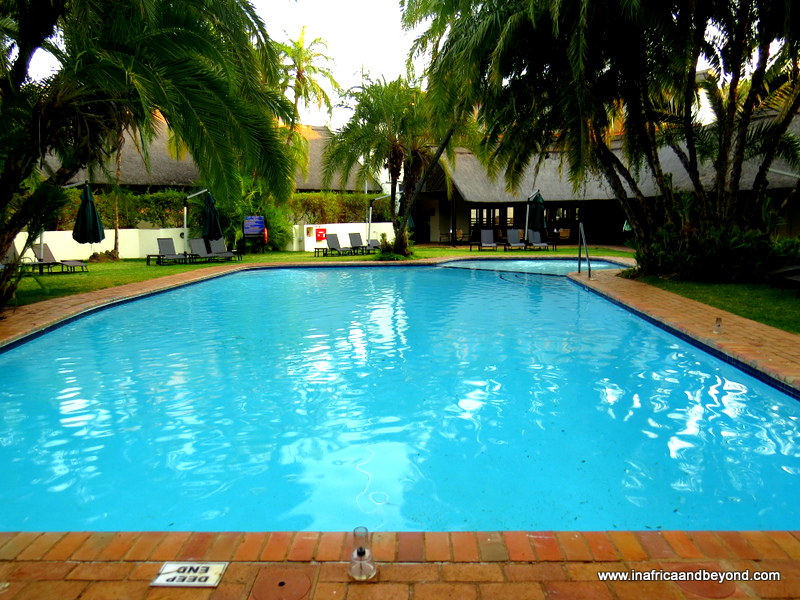 There is also a small wildlife information centre and snake museum that offers fascinating snake demonstrations with advice on how to protect yourself from snakes. Francois, one of the rangers, enthralled us as he showed us, individually, a lethargic puff adder, a hyperactive snouted cobra, and a boa constrictor – which we got to touch – and educated us on them. He was in a glass enclosure with the snakes so there was no chance of them escaping. 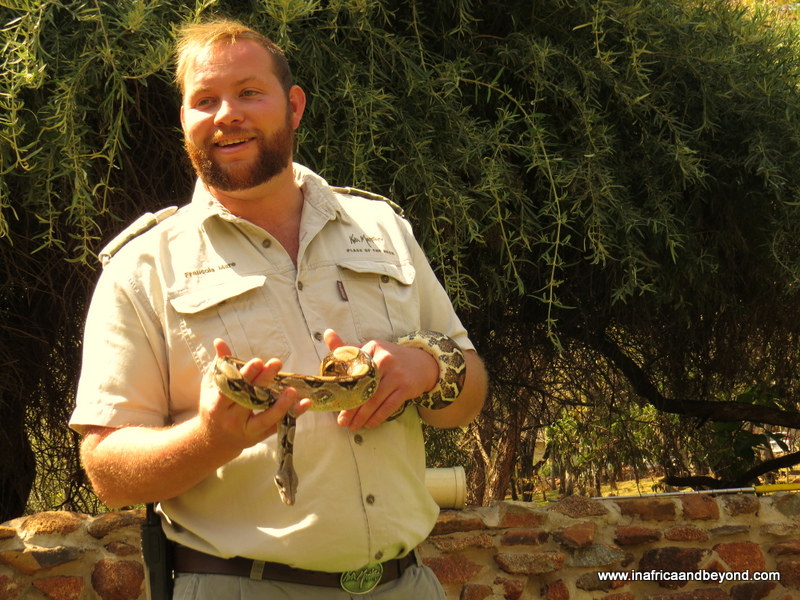 A 150-metre long underground tunnel located next to the restaurant leads to an animal hide, which is at eye level with an active waterhole, frequented by the animals in the reserve. Webcams transmit the activity at the hide to a TV channel, so you can watch from the comfort of your room if you don’t feel like taking the long walk through the tunnel. We could hear the elephants trumpeting at the waterhole from our room. That and the chirping of birds were the only sounds we would hear there.

Our three-hour game drive was eventful. We set off on a huge game vehicle with a group of foreign tourists and saw herds of elephants, several rhinos, tsessebe and other plains game. The Americans with us were especially fascinated with the giraffes as they had never seen them in the wild before.

We were more interested in the felines but we seemed to have just missed a leopard with an impala it had killed, and the lions were nowhere to be seen. But that is what the bush is all about. You never know what you’re going to see. At our sundowner break midway through the game drive, we were offered delicious vegetarian samosas and refreshing cool drinks near a hide, and then we continued our drive. 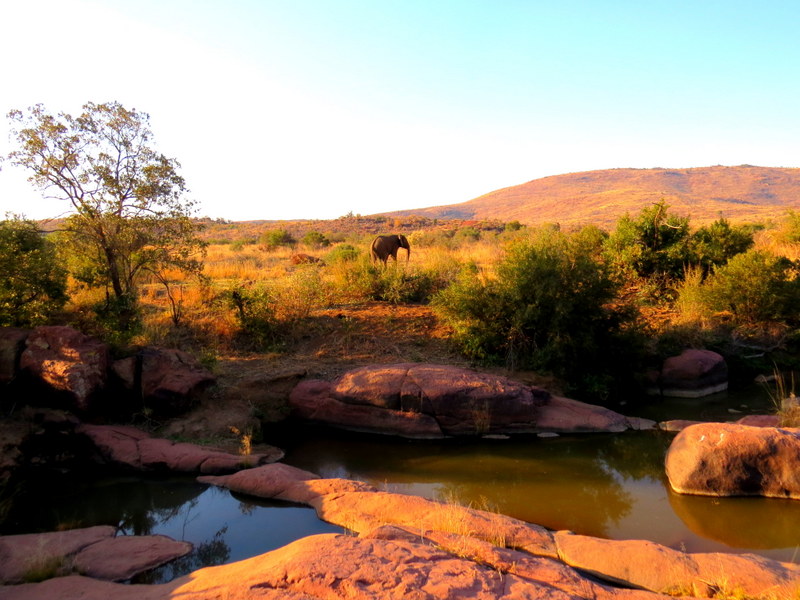 Elephant amid the spectacular scenery

When night descended and the stars began twinkling in the night sky, our game drive ended at the lodge’s boma where we were welcomed with hot towels, a traditional ginger drink, the sound of beating drums, and a bush braai. The boma was lit by a roaring fire, burning torches and lanterns on the tables. A huge spread was laid out for us.

Apart from the braai itself, there were more than sufficient vegetarian dishes served in cast-iron potjie pots waiting for us, freshly-baked garlic rolls, a salad station and a dessert spread that my kids were especially interested in. The talented musicians kept us entertained with traditional instruments while we ate. It was a traditional African meal in a traditional African setting and the ambience was amazing.  After a hearty dinner, we were driven back to the lodge for a good nights sleep. 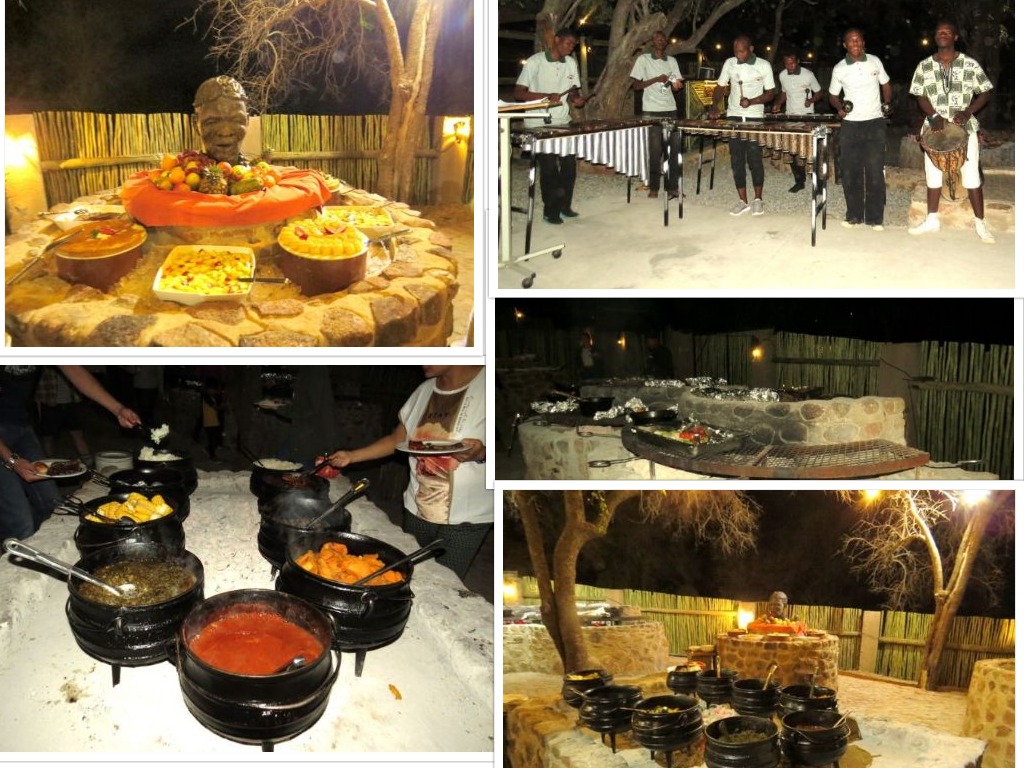 Our breakfast was served on the deck of the Kwa Lefakeng restaurant, overlooking zebras and elephants. My husband and I had Salmon Eggs Benedict as we always do when its available while the kids went crazy over the pancakes made to order. There was a great cold and warm buffet selection as well. 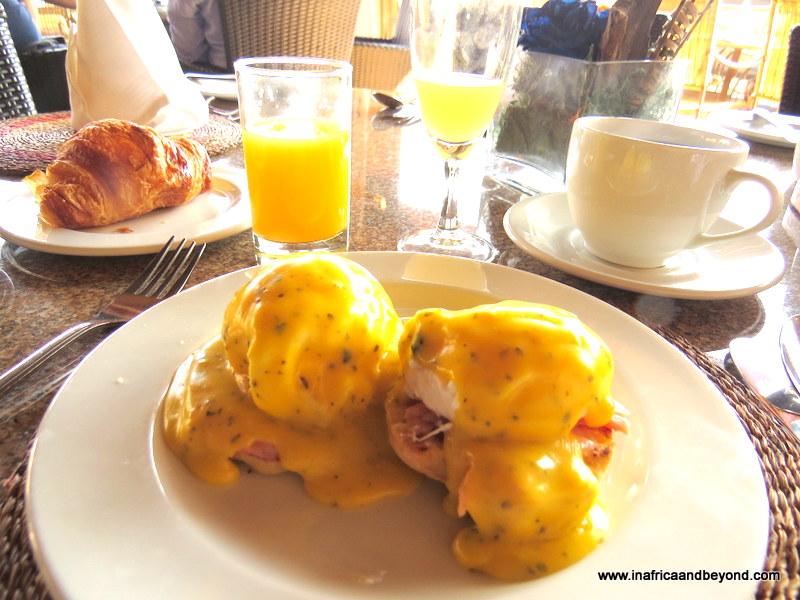 We only stayed for one night, which was way too short and when it was time to leave, we had to reluctantly drag ourselves away, hoping to return soon. If you're looking for a family escape or a romantic weekend getaway near Gauteng,  Kwa Maritane is a great choice.

See what to expect on a safari .

18 comments on “Kwa Maritane Bush Lodge - Place of the Rock”