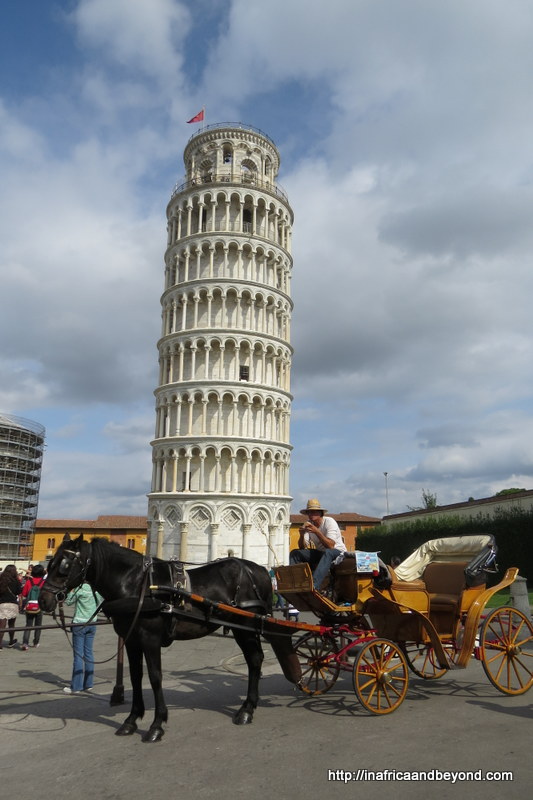 A visit to the Leaning Tower of Pisa from Florence

It is the only building in the world that millions of people have “tried to straighten”…and have failed. Yes, I am talking about the leaning tower of Pisa . Photographing oneself holding up the tower is a touristy must-do in Pisa.  The precise distance from the tower and the angle of one’s body tilt is usually calculated carefully before the photograph is taken – to show the folks back home and to post on Twitter, Instagram and Facebook. But actually being there and watching hundreds of people contorting their bodies into strange positions for the perfect photo from a different angle can be quite hilarious. 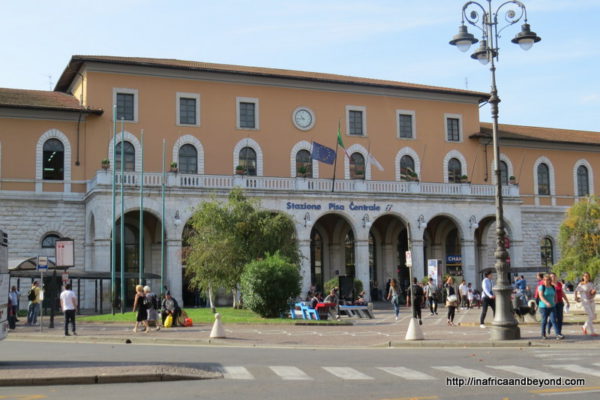 When planning our tight Italian itinerary, we factored in two nights to cover the best of Florence and Pisa. In deciding whether to stay in Florence or Pisa, rather than one night in each, I did some research which revealed that most people felt that there wasn’t much to see in Pisa besides the leaning tower (although some would disagree) whereas Florence was a veritable treasure trove of history and art. Well that settled it and visited the Leaning Tower of Pisa from Florence, where we stayed. 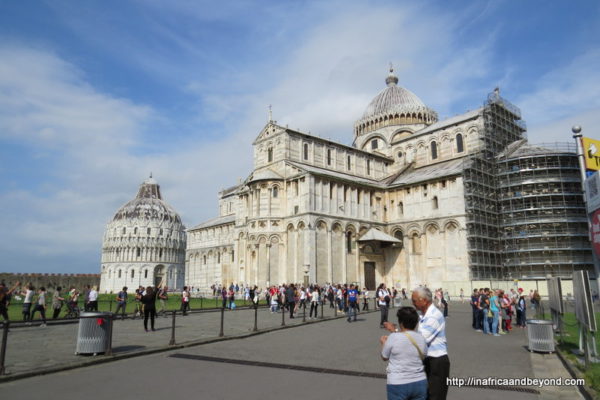 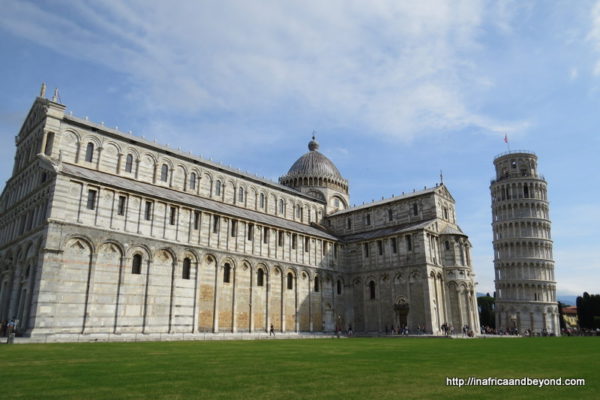 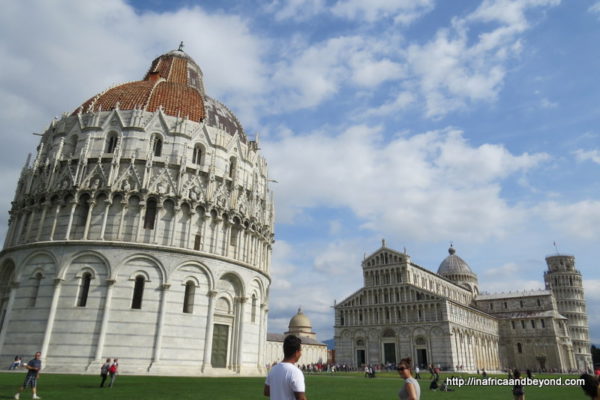 On our last morning in Florence, we took the train to Pisa – which took about an hour-  then took the bus from Pisa Centrale Station to the Leaning Tower complex also known as The Field of Miracles. The complex consists of four structures, the Cathedral of Pisa (Il Duomo di Pisa), the Baptistry, the Bell Tower of Pisa and the Monumental Cemetery. There are stalls selling souvenirs outside the complex.

The Leaning Tower, of course is the crowning glory of the complex but the Cathedral and the Baptistery also lean. The complex is free to enter but climbing the tower can be a bit pricey at 18 Euros per person and involves long queues. This, the lack of time and sore legs from having done, not one, but two walking tours in Florence the previous day, dissuaded us from climbing the 297 steps – to my son’s disappointment. 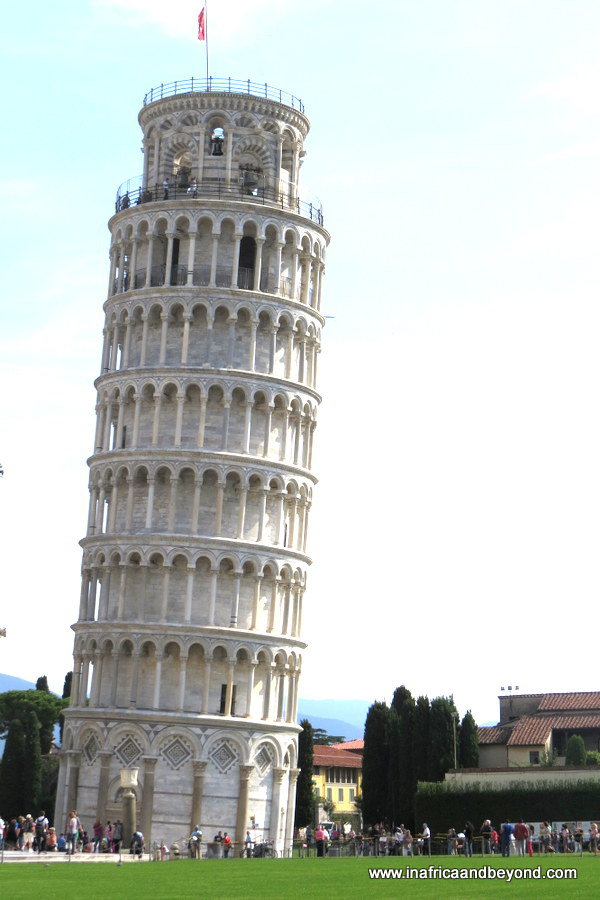 Originally designed as a circular bell tower, construction of the tower began in 1173 but it was only finished in 1399 due to ongoing wars. It is 60 metres tall and was meant to be a vertical tower but it started leaning during construction. The tower is made up of 207 columns arranged around eight stories, and looks like a massive wedding cake that has been toppled over.  According to legend, Galileo Galilei went to the top of the Leaning Tower of Pisa and dropped two items of different weights. They hit the ground together, which proved that gravity pulls all objects to Earth at the same rate of speed. 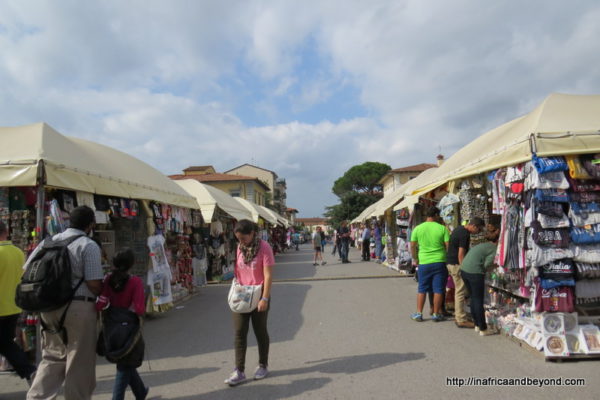 We sat on the beautiful emerald green lawns and admired the contrasting white marble buildings. We watched a honeymooning Indian couple make their own Bollywood movie as they ran in slow motion in front of the tower while a stranger filmed them.  We watched people in side-splitting positions trying to hold up the tower with their hands and feet and we watched another couple fighting – maybe they couldn’t agree on the perfect position? Of course, we took our own photos too. But mostly, we just enjoyed the peacefulness and serenity of the complex - a brief interlude in our hectic schedule. 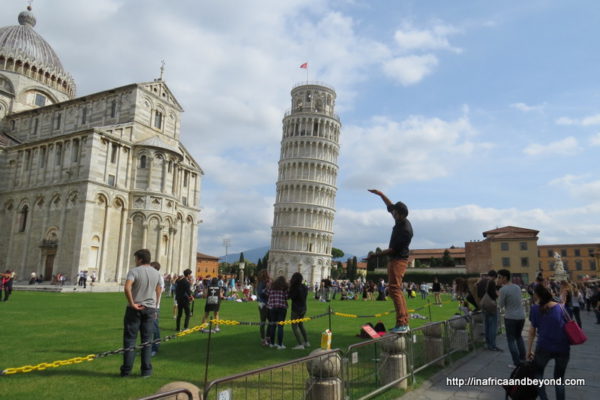 Posing at the Leaning Tower of Pisa

On our way back to the station we met other tourists who had also been paying Pisa a brief visit just to tick the tower of their list. Amongst them was an artist from the USA who came there to draw a picture of the tower for her friend and another couple from England, whose sister from Saxonwold in South Africa, had passed away a few months ago. We stopped at a station café selling doner kebabs and tandoori chicken for a bite then bid arrivederci to Pisa. Ahhh, the magic of travelling, new places, new people, new experiences but global food!