Matjiesfontein – A small village with a huge history 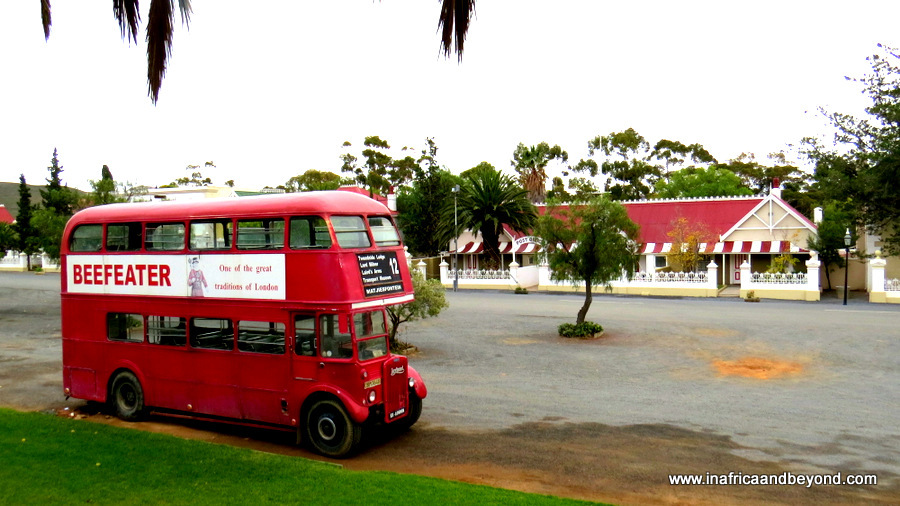 The quaint Victorian village of Matjiesfontein whispers of a rich history filled with money, murders and ghosts. It was established in 1883/1884 by a Scotsman, James Douglas Logan, as a health resort where those with lung complaints could recuperate. Logan believed that the Karoo air had cured his own weak chest. Lampposts from London were imported to light up the village’s main street and the resort was frequented by affluent people from around the world, a fashionable thing to do at the time. Cecil John Rhodes, the Sultan of Zanzibar, Sir Randolph Churchill (father of Sir Winston), and Rudyard Kipling were some of its patrons. The famous South African writer, Olive Schreiner was a resident there. The villa she rented next to the post office is still known as Schreiner Cottage. 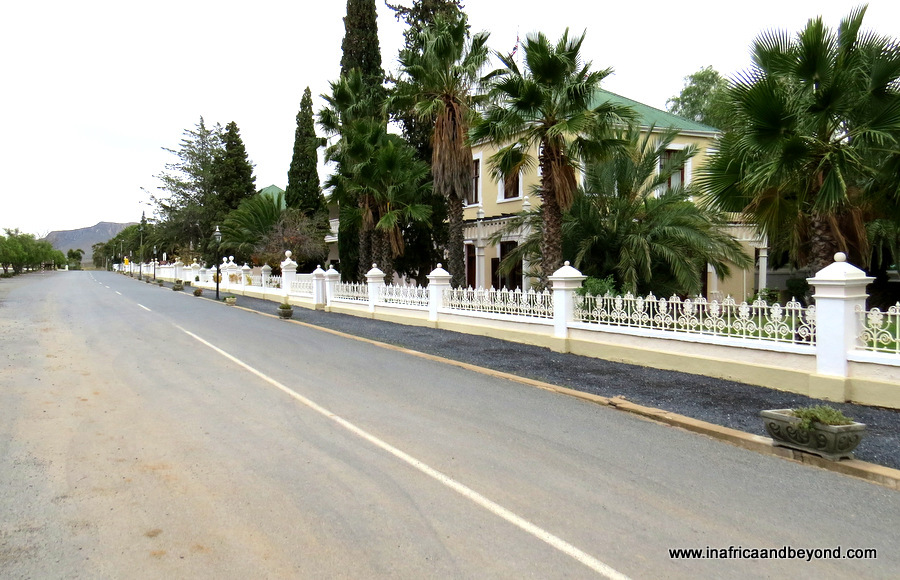 Preserved as a National Heritage Site since 1975, Matjiesfontein’s main constituents are the Lord Milner hotel, which was built in 1899, a couple of museums, and several Victorian cottages. The hotel once served as a military hospital. Long-gone soldiers are said to haunt the village.  Thankfully I didn’t encounter any. 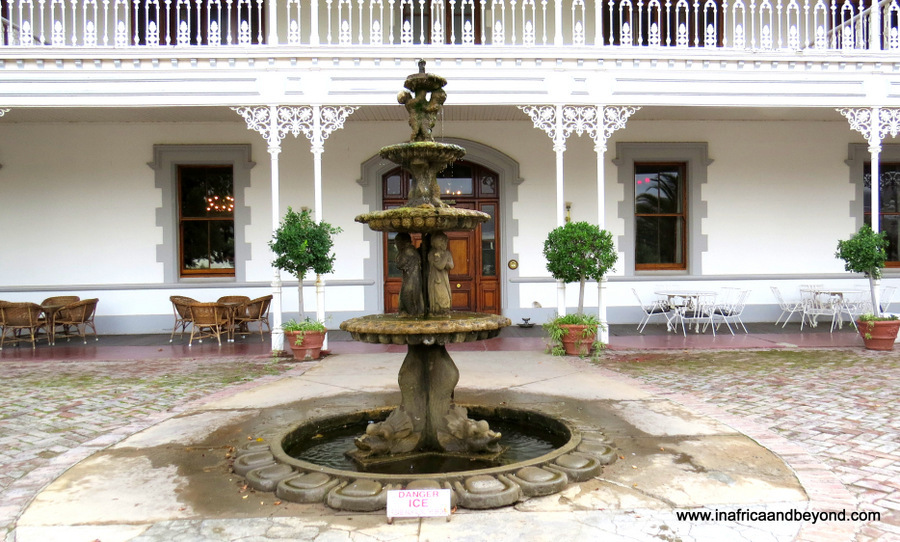 On my first visit there, we were driving on a road trip to Cape Town from Johannesburg. The Blue Train had stopped overnight. As guidelines in the village were a bit scarce, we left without knowing about all its attractions. My second visit was courtesy of Rovos Rail, on which we had arrived for a tour. My third visit was on the Blue Train, en-route to Johannesburg, and was also different from the other two visits.

My visit to Matjiesfontein on Rovos Rail

On this occasion, we were armed with a map of the important features, ensuring that we did not miss much, and given time to explore. 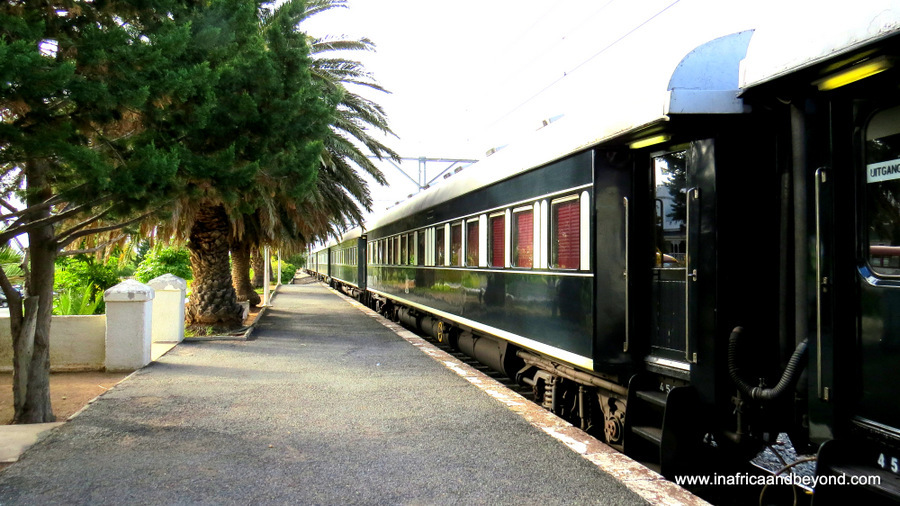 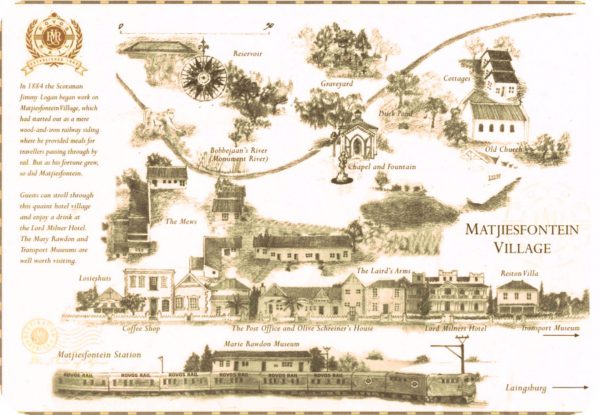 We were dropped off by the train to walk the last bit to the village. The cool, refreshing morning walk amidst the expansive Karoo plains was a great way to start the day. As we approached the village, we were sung to by a group of children, eagerly awaiting benefactions from the tourists. 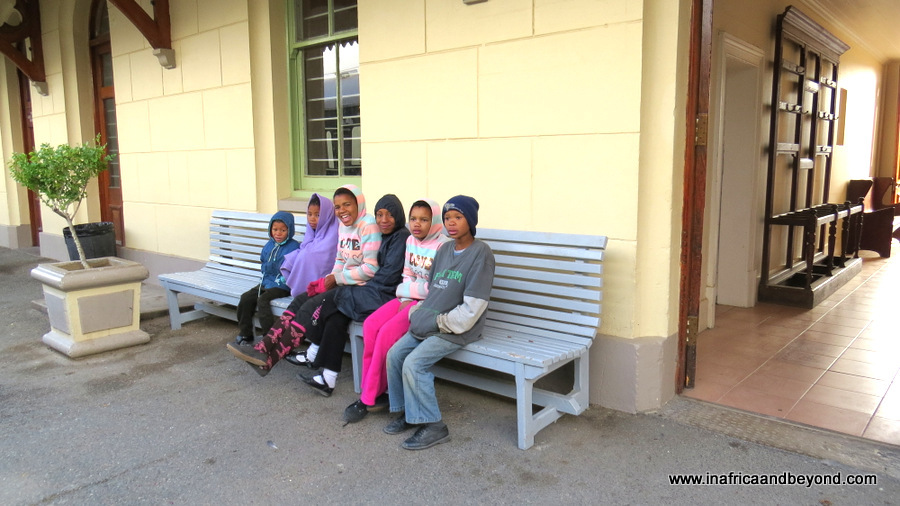 The pond, fountains, and beautiful gardens around the hotel form a lush oasis in the desert. “The Beefeater”, a blood-red old London bus takes pride of place against the trees lining the railway station. 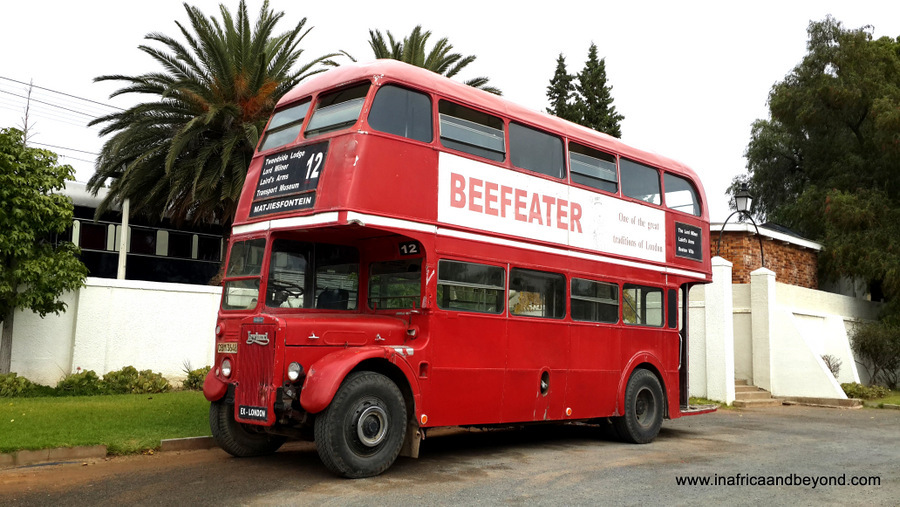 The museums were impressive. The first one we visited was a vintage car museum. At first glance, it is a small showroom with some old cars in it. However, there is a back door leading to a much more impressive collection of vintage cars, bicycles and old steam trains. The collection includes two Royal Daimlers from King George VI’s 1947 tour of South Africa in 1947, on which he was accompanied by Princess Elizabeth (the current Queen Elizabeth) and the late Princess Margaret. Next to the museum is a large field on which the first international game of cricket was played in South Africa in 1896. 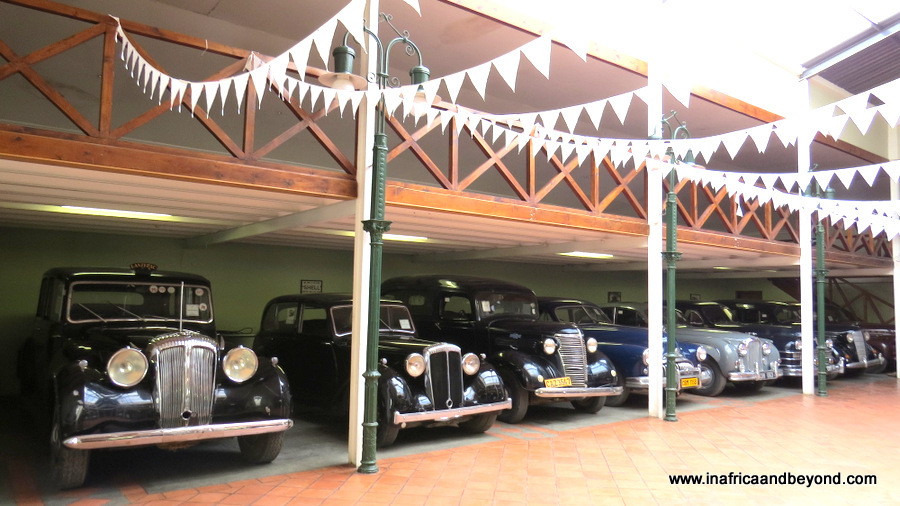 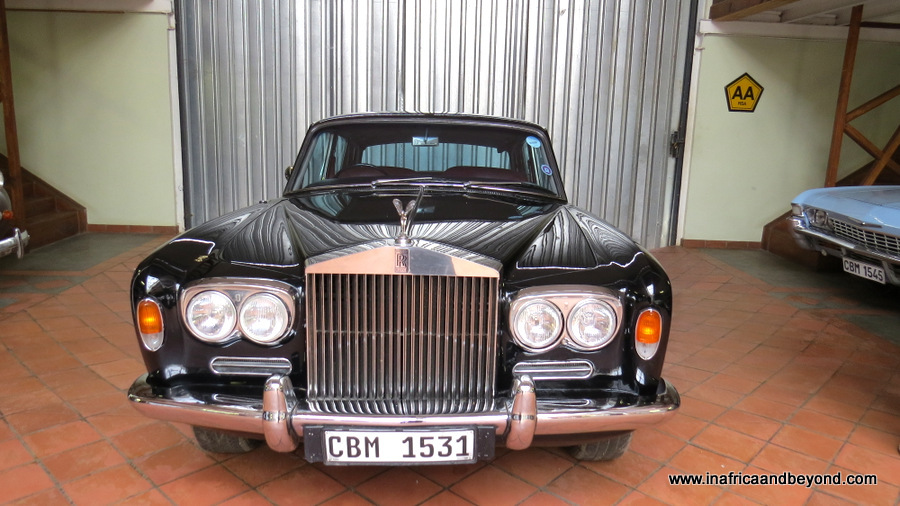 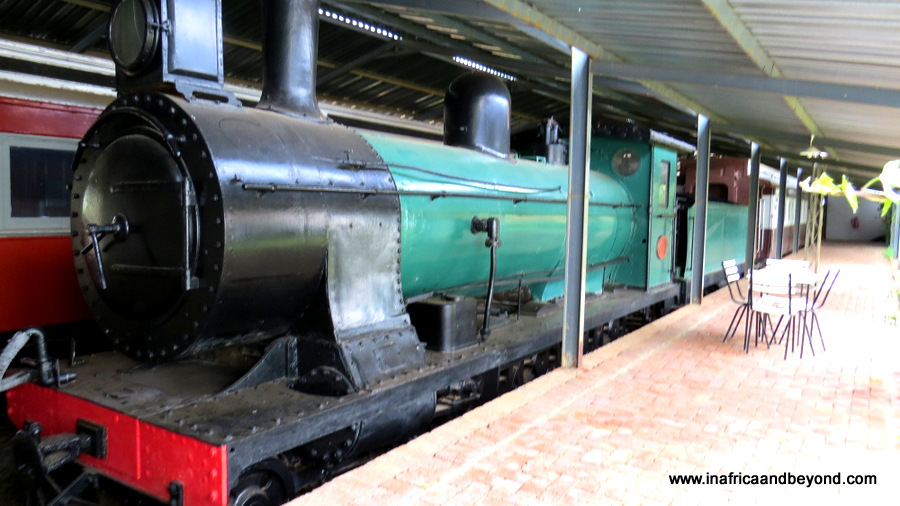 The Marie Rawdon Museum is a magnificent collection of Victorian memorabilia including furniture, old cameras, toilets and recreated scenes including a grim-looking dentist’s surgery and a barber’s shop. Budget on spending a lot of time there. 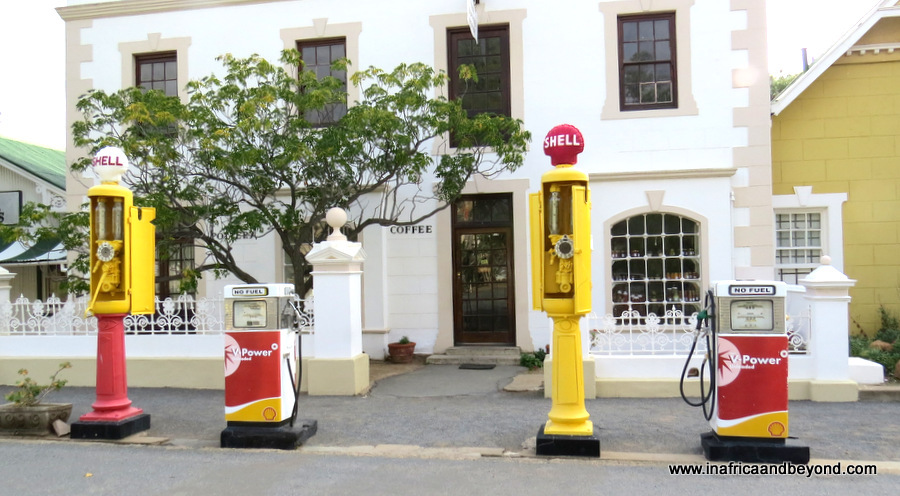 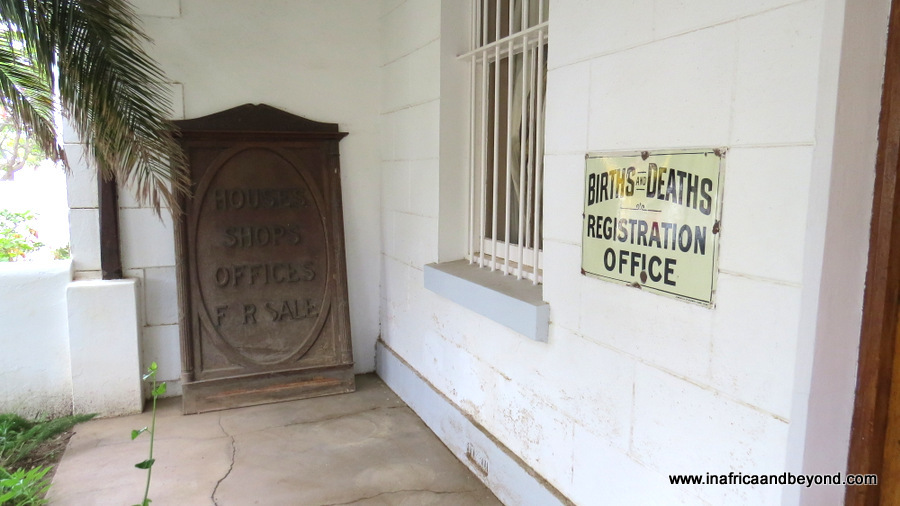 The crisp fresh air and the historical surroundings made for a revitalising escape back in time. I also saw alot more on my second trip than I did on the first. I did have one regret though. Having previously read up on the village, I knew much of its history but it was lost upon my fellow travellers. They had no idea of the historical significance of the village - even after the visit - and were amazed when I shared some of it with them. This is where a knowledgeable tour guide would have added immense value to the visit. 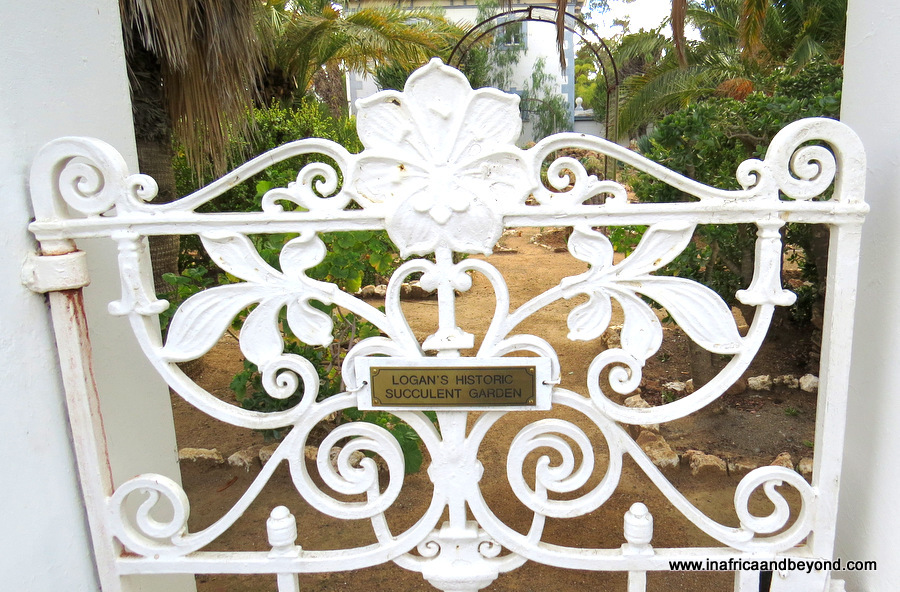 My visit to Matjiesfontein on The Blue Train

The Blue Train stopped here en-route to Pretoria, from Cape Town. We were welcomed by Johnny, the resident tour guide (and entertainer), who was blowing the bugle and calling out to everyone to board the Red Bus. 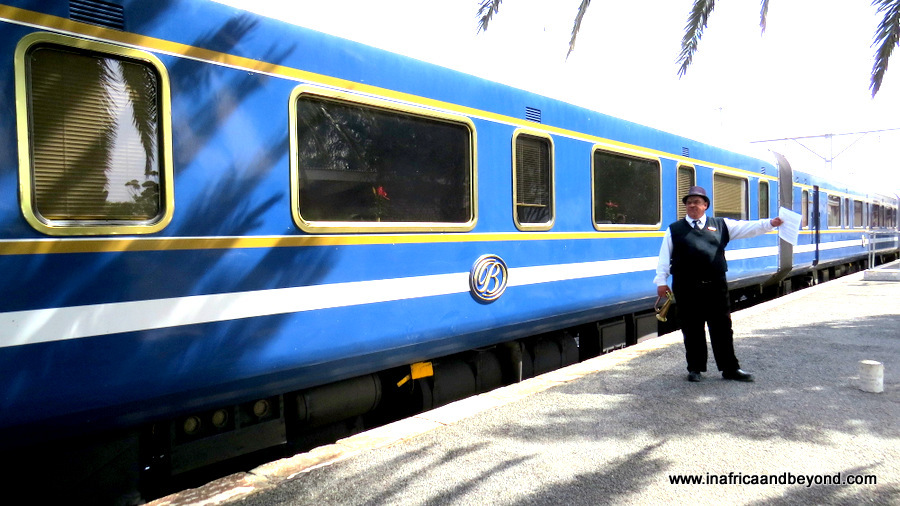 Johnny outside the Blue Train

Although I'd heard about Johnny before, it was the first time I met him. It was also my first time on this bus and I found a seat on the top deck. It was quite old inside, as expected, and some of the seats were not in great condition. Johnny welcomed us to the shortest tour in South Africa. I found it to be the most entertaining too. The guests were in stitches as Johnny showed us around Matjiesfontein, talking in a stern voice but repeating phrases like "It's show-time!", "I love it when you talk foreign" , "We are going to turn left/right because we cannot turn right/left" and addressing the bus by its name, Futtom Fluffy.

When the tour was over, he took the guests for drinks then showed us around the public areas of the Lord Milner Hotel. 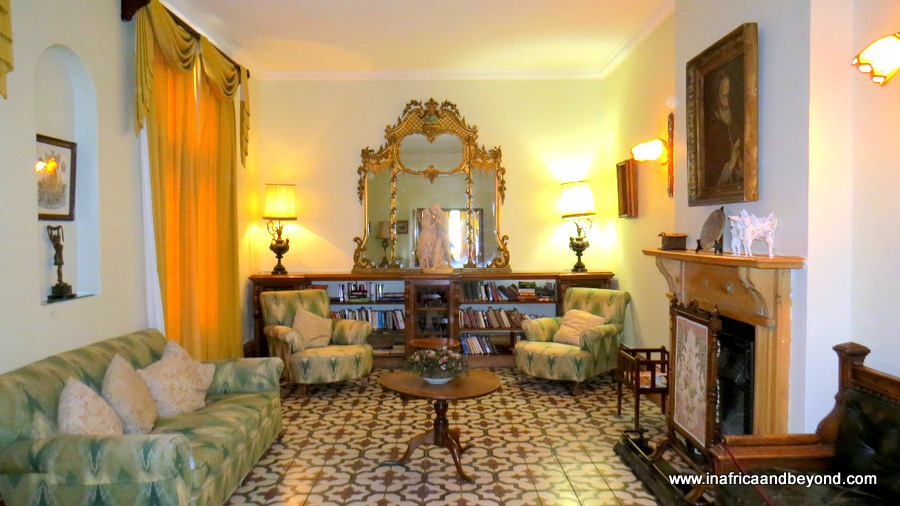 I asked him about the ghosts, and he pointed out a small chest to me, in the lounge saying that there was a photo of the ghost in there. This was the photo I saw. And apparently, it's real. 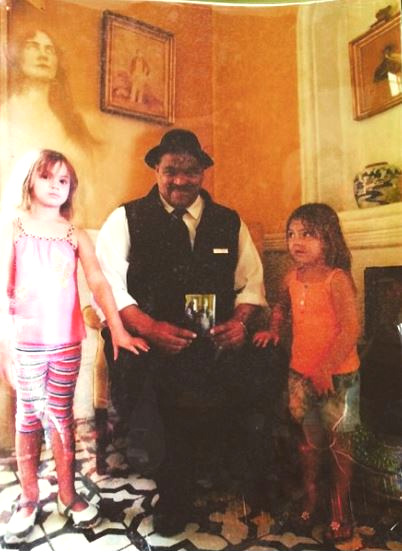 Do you spot the ghost? 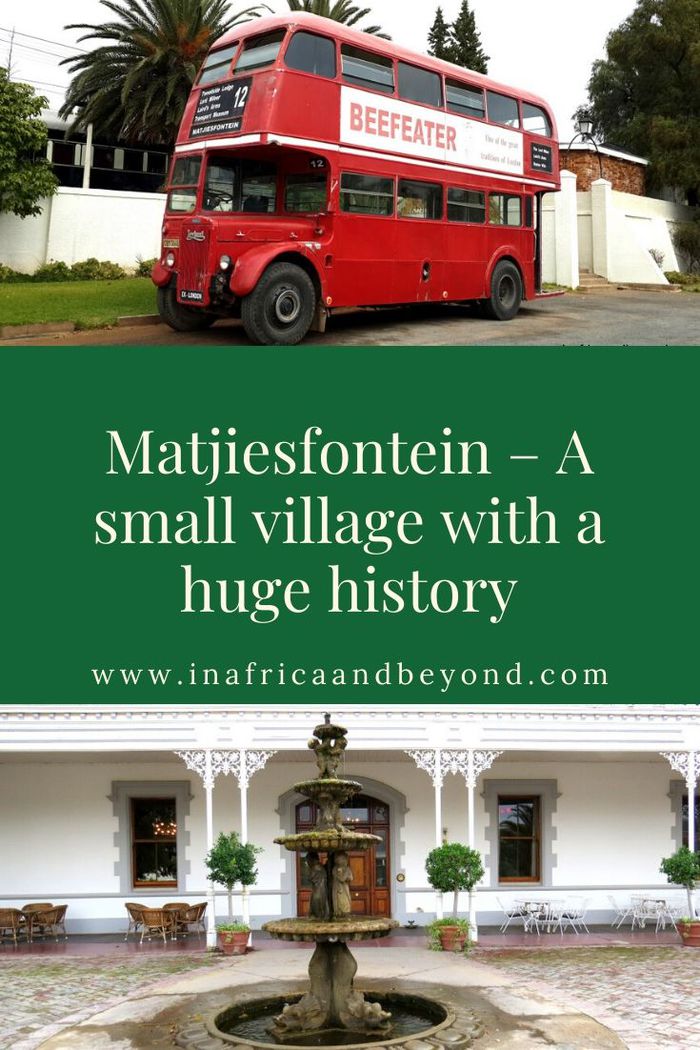