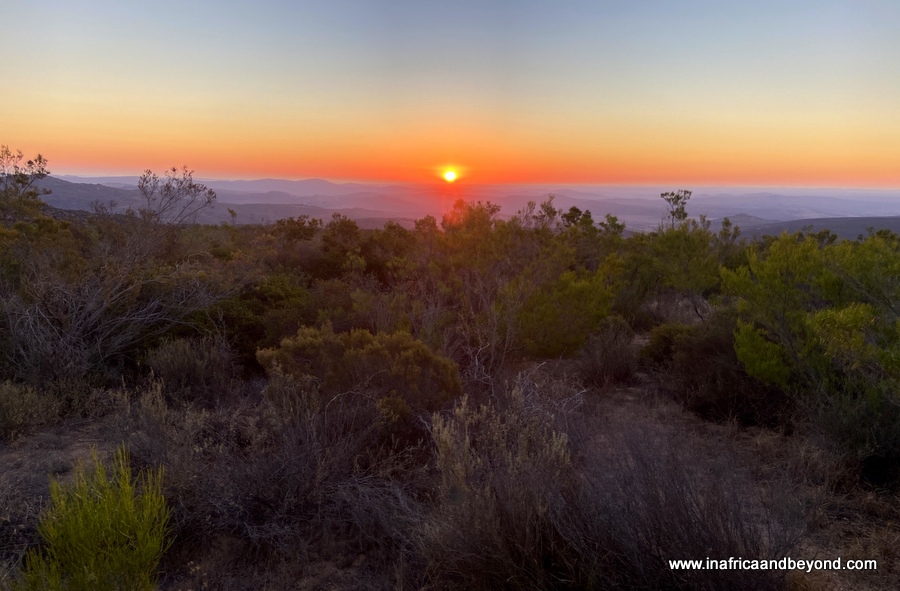 Namaqua National Park may be best known for its annual explosion of bright carpets of wildflowers in spring, but that doesn’t mean that it has nothing to offer during the rest of the year. We spent two days in the park in autumn and discovered that there was much more to it than beautiful blooms. 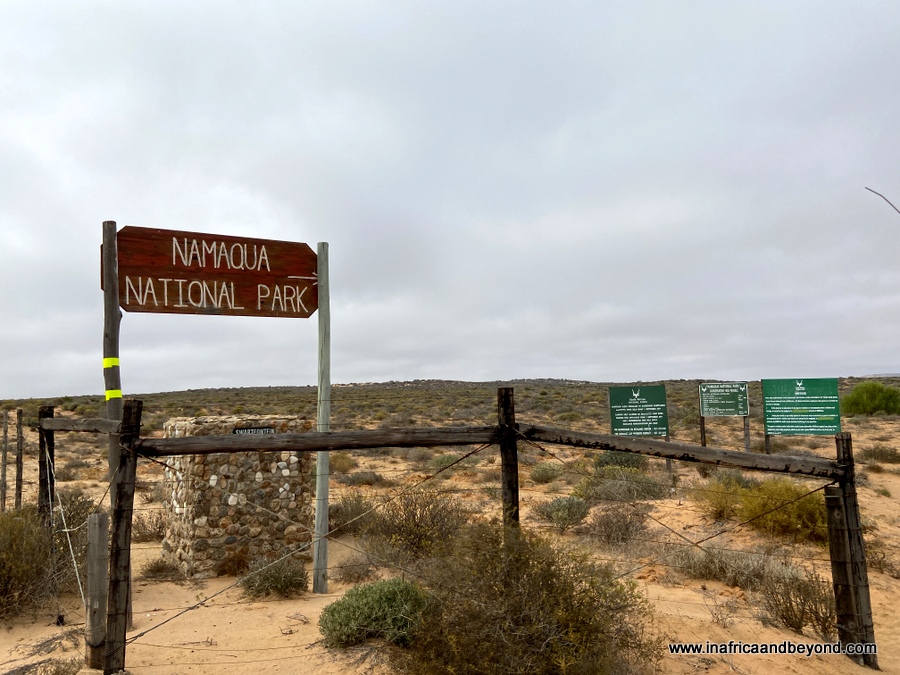 Part of the semi-desert succulent Karoo biome, Namaqualand is home to the richest bulb flora of any arid region in the world. The park was originally established in 1988 to protect this flora. Thereafter, it was taken over by Sanparks and expanded gradually to its current size of 141,000ha. It consists of the inland Skilpad wildflower reserve section and the coastal Groen River section, which are vastly different. The inland section consists mainly of valleys, plains, green hills and rocky outcrops, while the coastal section, which is lesser known, comprises rocky shores, white sandy beaches and dunes, and beautiful bays. 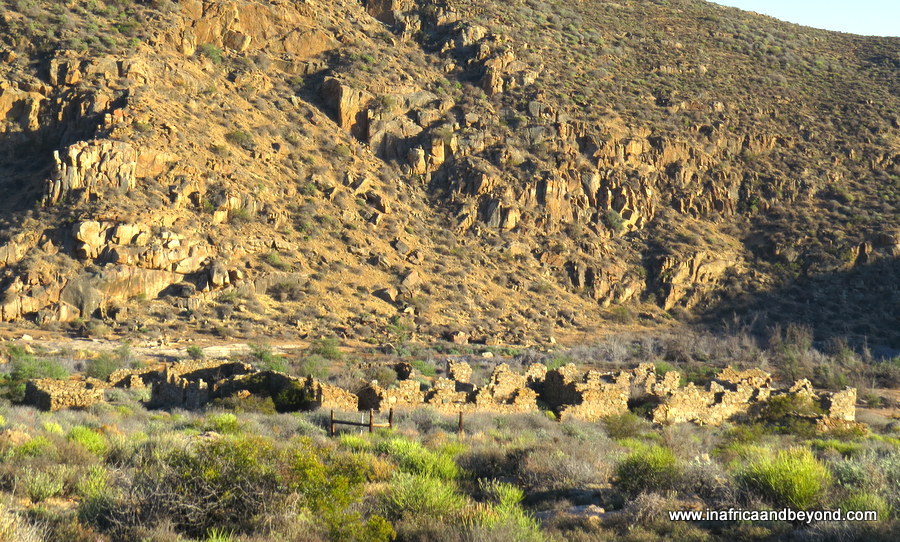 Ruins of the old jail

We explored the park on a tour with Fabian, our local guide, going from the inland section around the park to the coastal section, which is a marine protected area. It took us 8 hours including a few short stops. We drove through the village of Soebatsfontein, navigated the historical hand-built Wildeperdehoek Pass, stopped at the old prison in the shadow of the mountains and saw the shipwreck in the quaint fishing village of Hondeklipbaai. 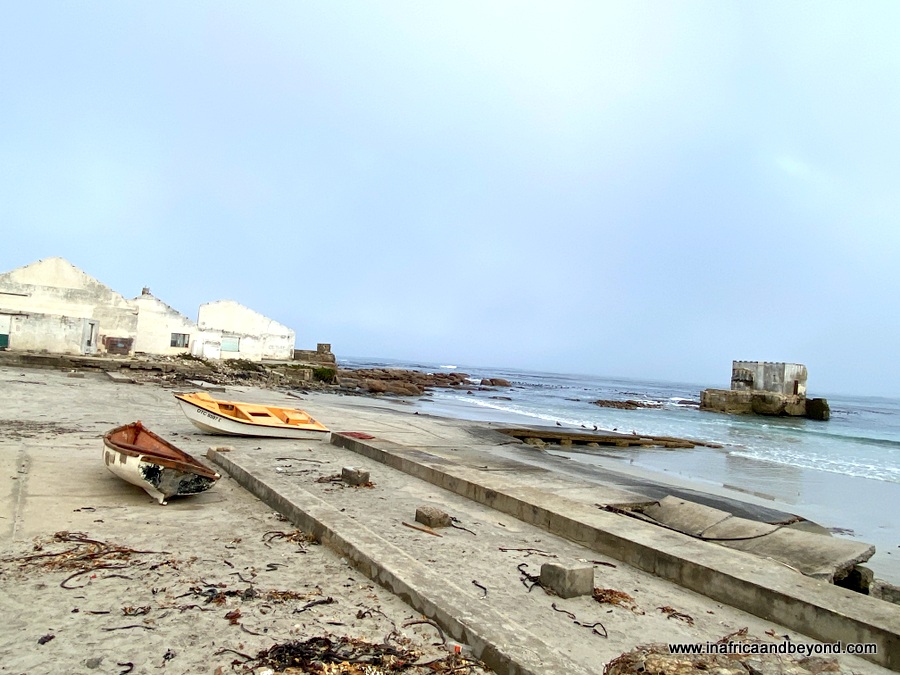 Our route then took us to numerous panoramic viewpoints along the unspoilt misty coastline, as well as the lighthouse, before we returned to the Skilpad section using the faster, but less scenic road via Garies. Apart from a few campers, we barely saw any other people in the park. It was fascinating to see such a diverse part of South Africa. 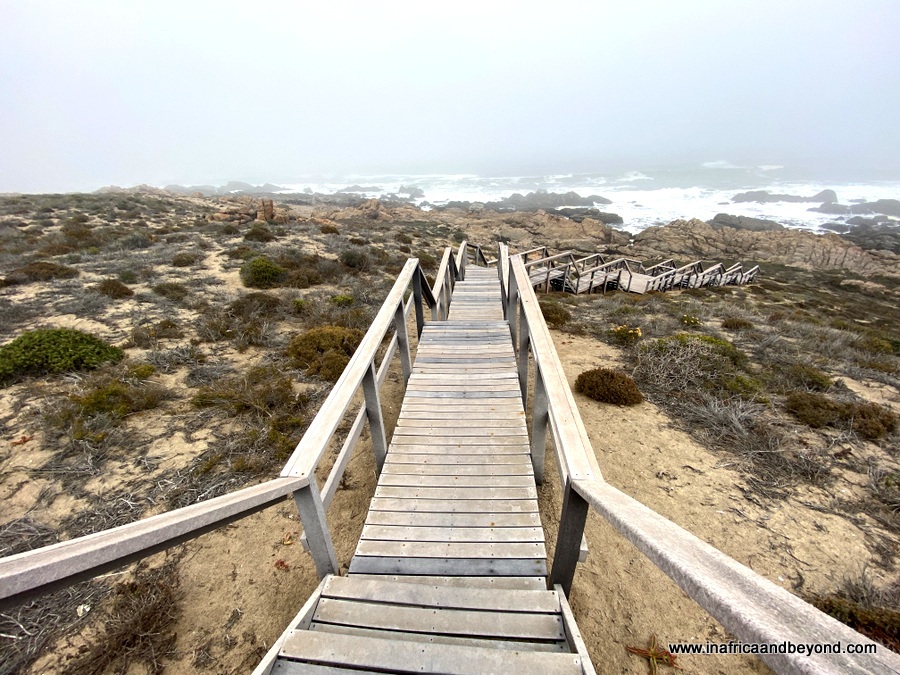 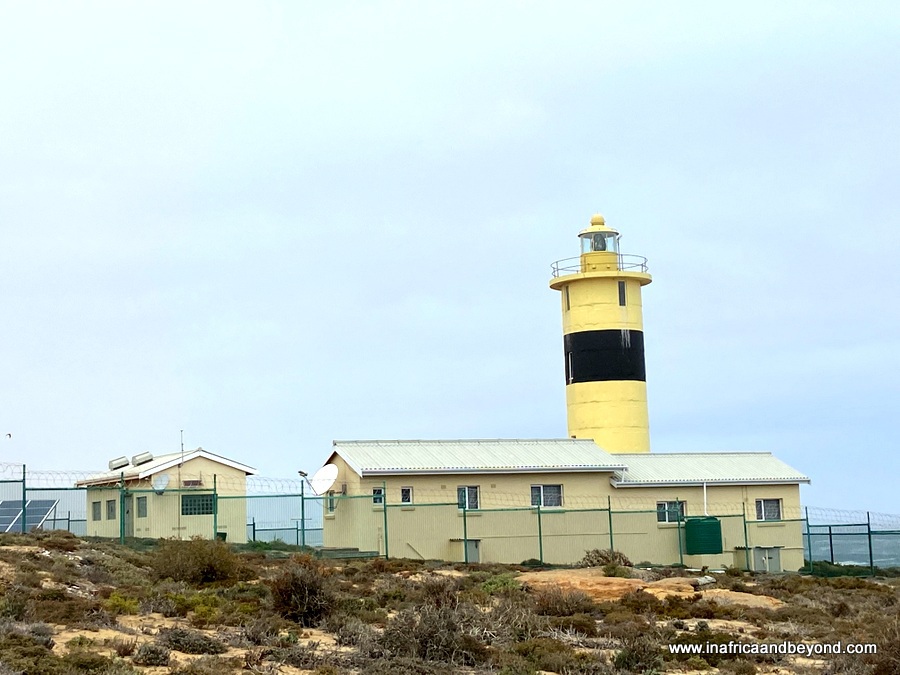 The park supports a wide variety of wildlife and birdlife too, and we saw gemsboks, springboks, meerkats, flamingos and ostrich. Predators such as caracals and leopards lurk in the park but are less often seen. The coastal section is home to a colony of Cape Fur Seals, and if you’re lucky, you may even see dolphins and whales. 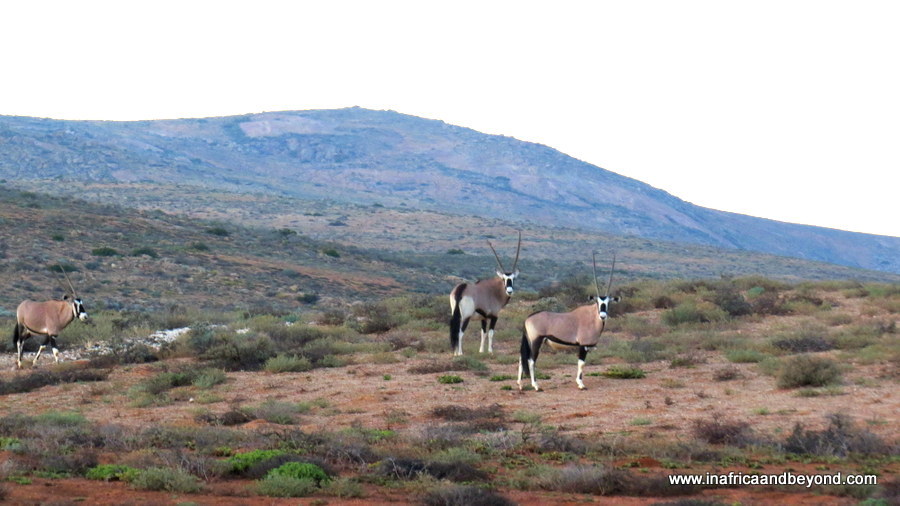 We stayed in the Skilpad Chalets, the only chalets currently in Namaqua National Park, although there are plans to build more in the Groen River section. There are just four self-catering chalets perched on the escarpment overlooking the rolling hills. More cosy than luxurious, they are warm and inviting with a farm-house style ambience. 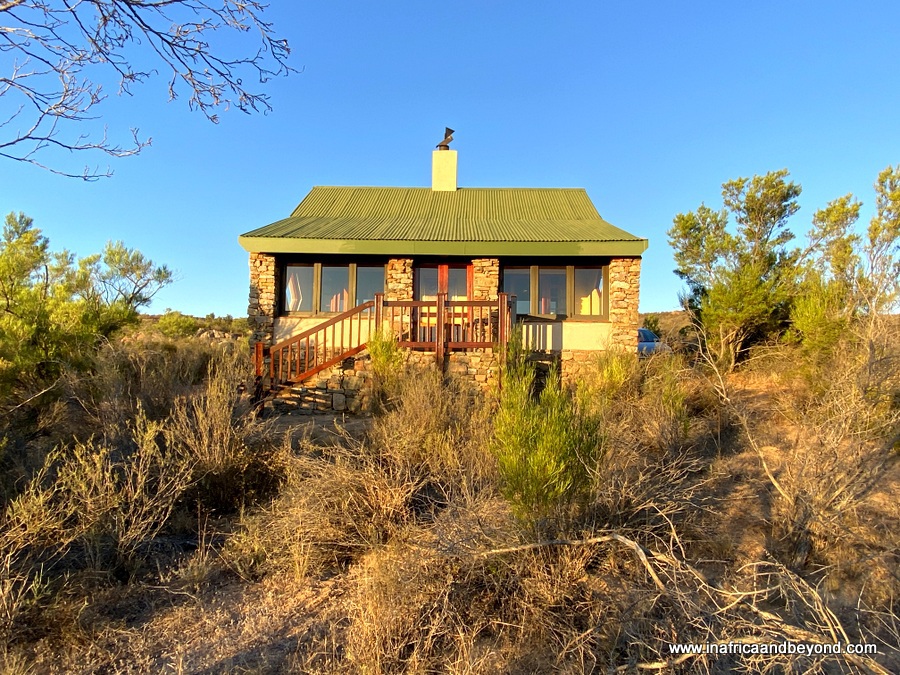 Suitable for up to 2 adults and 2 kids, they consist of a main bedroom, a bathroom, an open-plan kitchen and lounge area with a sleeper couch and a delightful enclosed patio which is bathed in golden sunlight in the late afternoons. It’s a great place to admire the spectacular sunsets from, and of course, the flowers in spring. 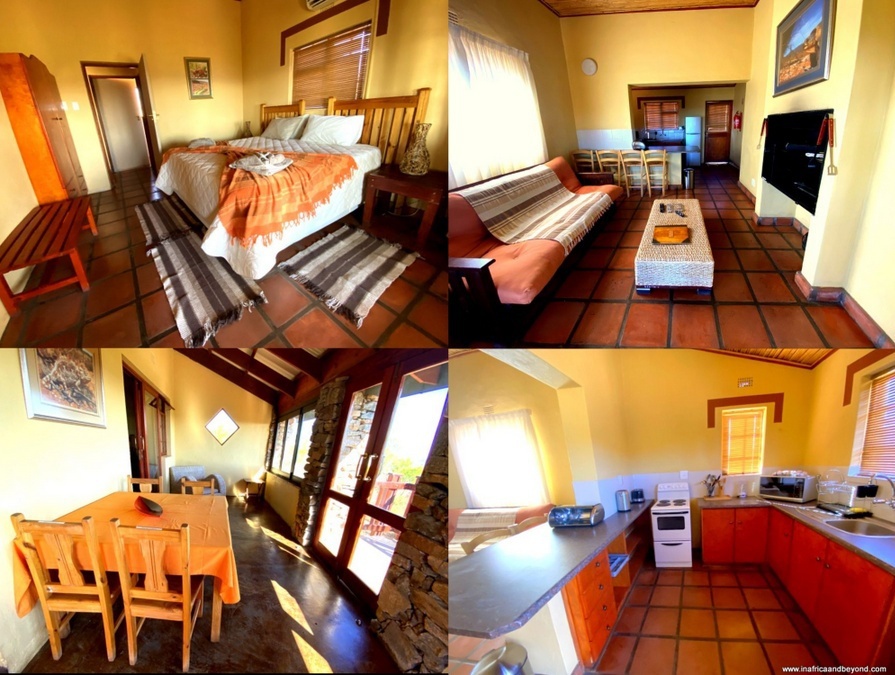 During August and September, the valleys of Namaqualand are transformed into a floral wonderland with over 3 500 species of flowers, attracting local and international visitors. The exact timing, quantity and variety of flowers does depend on the winter rainfall though. The Skilpad chalets are usually booked out at least a year in advance for flower season, although two luxury tented camps are set up during this period too. 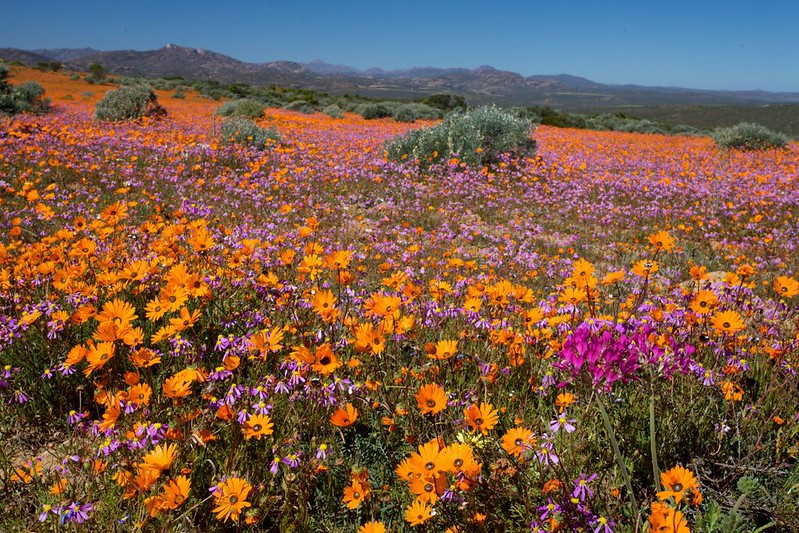 Namaqua National Park can be explored by walking, hiking, mountain biking and 4X4 trails. Look out for the wildlife, succulents and fossilised termite mounds dating back between 4 000 and 30 000 years. Do visit Die Dak van Namak (The roof of Namaqualand), a beautiful viewpoint in the Skilpad section, which coincidentally also has the best mobile reception in the park. Night-time is great for stargazing. 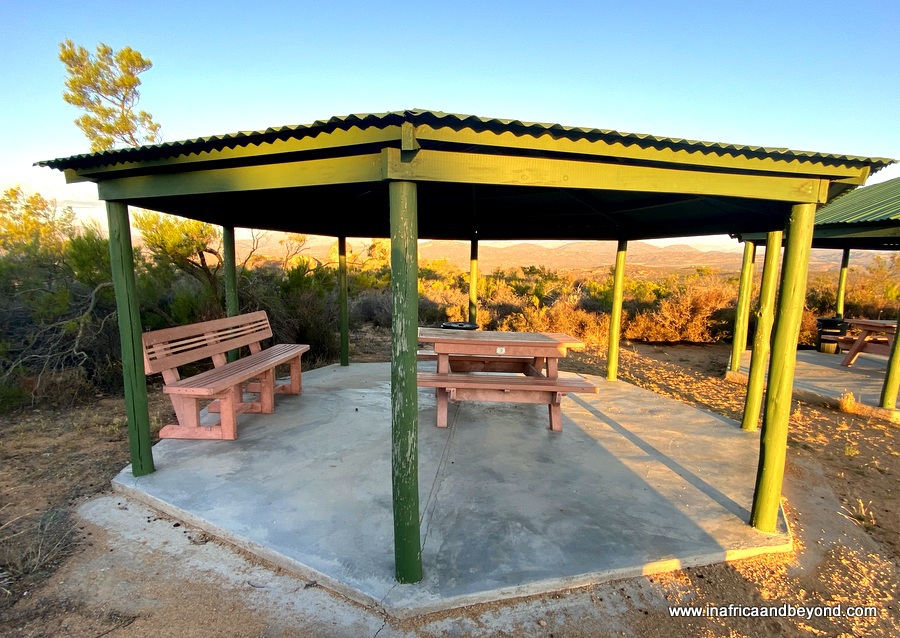 Seeing Namaqualand in bloom is a once-in-a-lifetime experience so by all means, go during the flower season, but be sure to visit out of flower season as well. The park is quieter and more serene and you have it almost all to yourself. It’s the perfect place to disconnect and relax.

For more information and to book, visit Namaqua National Park.

Namaqua National Park is situated in the Northern Cape province

The water in the taps is not safe to drink so take bottled water.

Also take shampoo and any other supplies you need as there aren’t any shops, restaurants or fuel stations in the park.

There is no cell phone reception in most of the park, although we did manage to get signals intermittently.

To get to the Skilpad section, turn off the N7 at the Kamieskroon sign and turn left at the hotel. Then follow the Sanparks boards. There is a 21 km gravel road to get to the camp. You can navigate it with a sedan but the condition is not great so a 4X4 will be better.

To get to the Groen River section, take the N7 south from Springbok or north from Cape Town and turn off at Garies. Go through the town then turn west towards Groen River. Follow the gravel road for 73 km.

Do you need a 4x4? All roads inside the park are gravel and most are not suitable for sedans. Therefore a 4x4 is recommended to get the most out of your trip.

If you don’t have a 4x4, you will be able to access the camps in the Skilpad section and do a short circular trail with a sedan. Thereafter, you can do more exploring by hiking, walking or mountain biking. 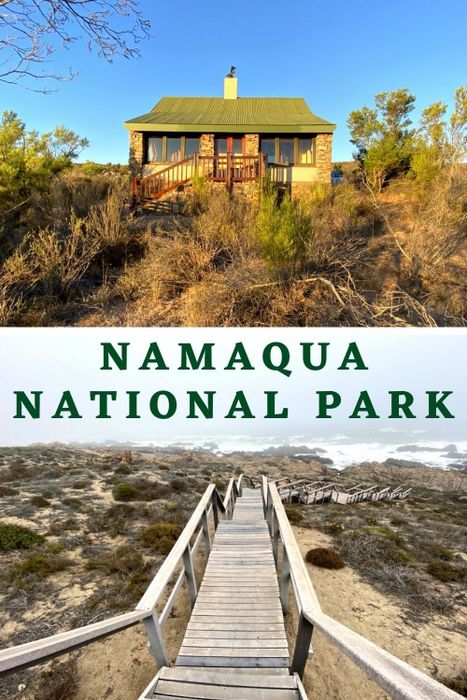