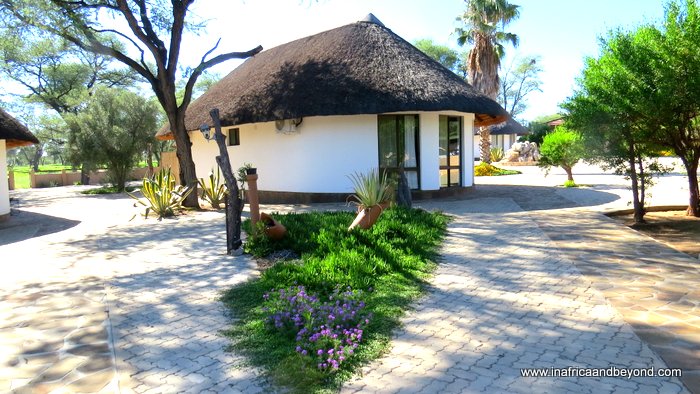 There is something special about Africa that touches the soul. Its alluring combination of scenery, wildlife and culture captures hearts and imaginations, and creates experiences that will forever be etched in ones memories, and memory cards. 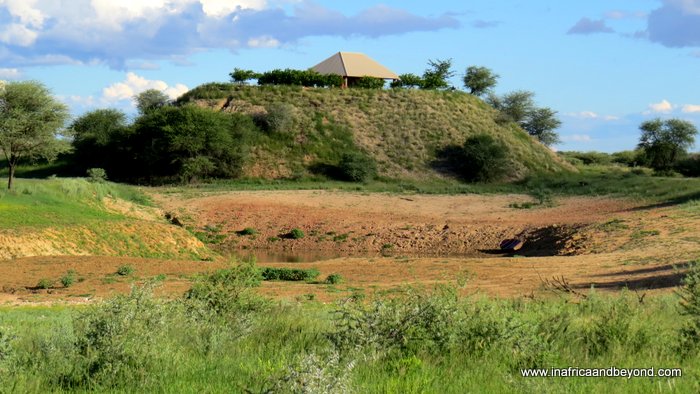 The lodge is situated 20 kilometres away from the quaint little town of Omaruru, near the Erongo mountains. It makes a great stopover point between the better known areas of Swakopmund, Etosha and Windhoek. Interestingly enough, most of Namibia’s major tourist attractions lie within a 250 km radius of Omaruru.

After several days of driving on gravel roads through Namibia, while visiting its other attractions, it was refreshing to be able to drive to the lodge on a good paved road. We were welcomed with chilled, scented towels and mocktails, and shown to our room. 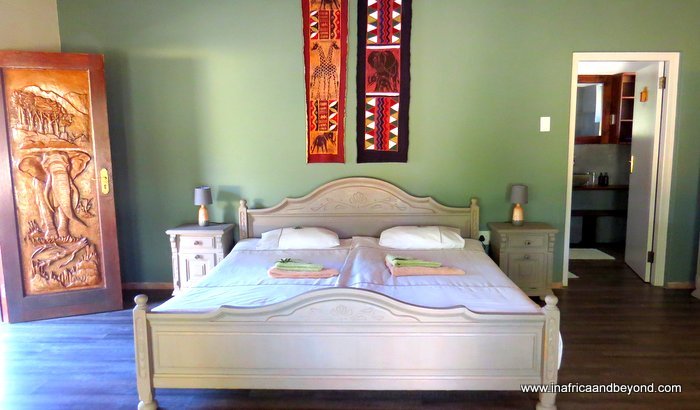 There are ten en-suite air-conditioned rooms consisting of two suites, three deluxe rooms and three standard rooms. Each room sleeps two people however a young child can be accommodated in some of the rooms. The rooms are housed in rondavels. Two savannah tented rooms were being constructed while we were there. The suites and the deluxe rooms have terraces overlooking the floodlit waterhole where wildlife come to quench their thirst at night. 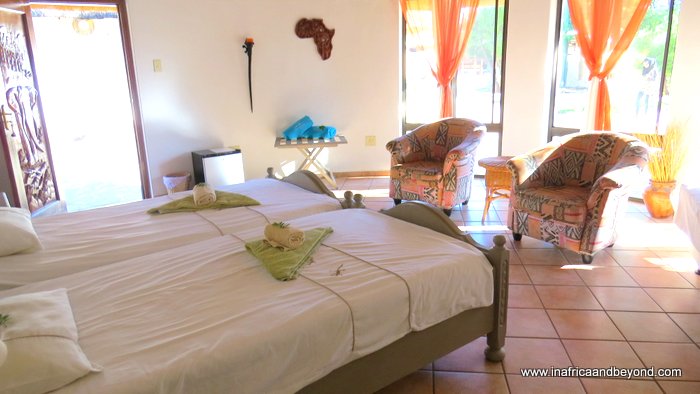 We had two adjacent rooms, for us and our children. The spacious newly-refurbished rooms had high thatched roofs and carved wooden doors, and were tastefully decorated in African chic style. They consisted of beds and wardrobes, as well as a living area with comfortable armchairs, a coffee table and a small fridge. Healing Earth toiletries were provided in the bathrooms. The rooms were comfortable and we were quite happy to relax in them. The children enjoyed the availability of wi-fi while lying on their beds. At night, I could see the impalas drinking at the waterhole and in the morning, I was woken by the chirping of birds. 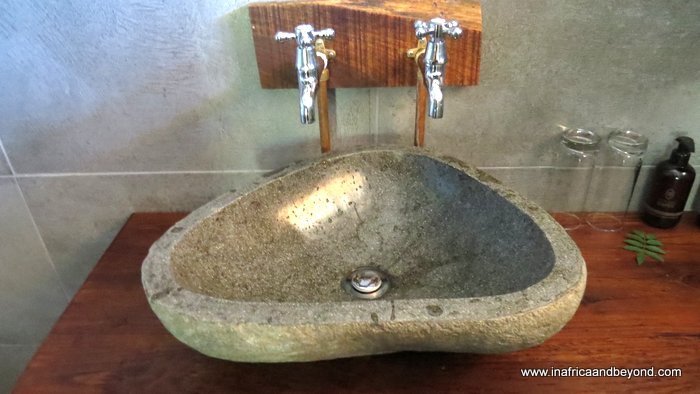 Onduruquea Game Lodge is owned and managed by the Harmsen family from the Netherlands. They relocated to Namibia in 2017, when they bought the lodge from another family. The Harmsens have big plans for the lodge, including yoga retreats and cooking workshops with top international chefs. Between them, the members of the family have many skills and talents. These are all brought together in the running of the lodge. 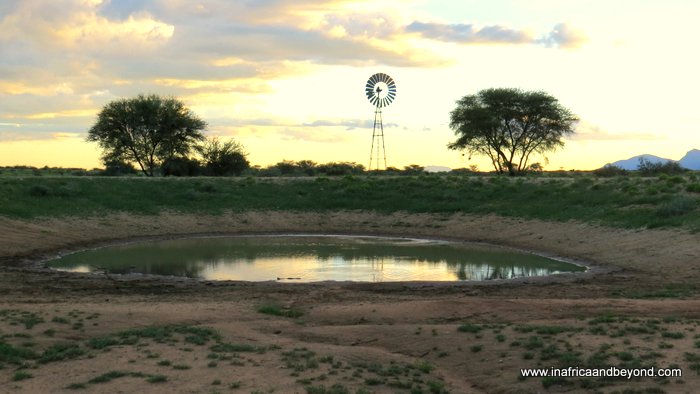 Marcel, the owner, took us on an afternoon game drive amid the picturesque reserve, home to 20 different species of game. We saw jackals, ostriches, springboks and other plains game. The birdlife is prolific too and I saw some very unique birds there. 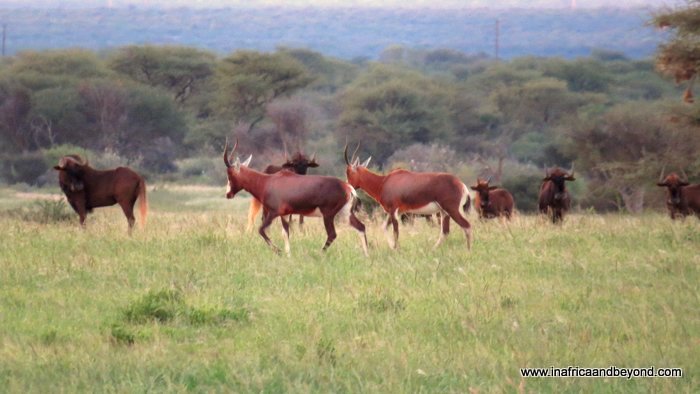 As the sun began to disappear below the horizon, we stopped to have drinks and enjoy nature’s fiery display. Private game drives can also be arranged for the early morning or at night, to see leopards. As this is a private reserve, there are no other game vehicles, and one can enjoy the beautiful surroundings, in peace. 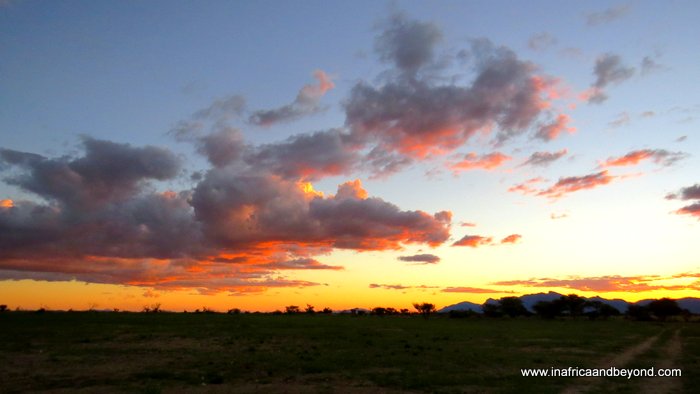 The meals at Onduruquea are one of its main specialties, and are served al fresco. The boma fire is lit on chilly nights. Meals are prepared by Chef Ron, the Harmsens’ son-in-law. Ron has worked with a Michelin-starred chef in the Netherlands and is an expert at French and African fusion cuisine. He constantly amazed us with his innovative and delicious three-course dinners, bearing our dietary requirements in mind. His desserts were the highlight for my children. Day visitors are welcomed at the restaurant for lunch too. 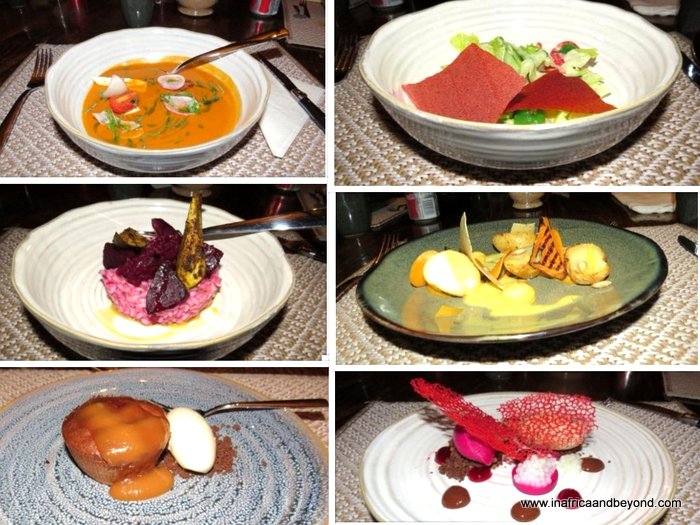 Some of the dishes we enjoyed

There is a small, but vibrant spa on the premises where massages are offered, and a huge swimming pool with panoramic views of the surrounding landscape.

The motto here is fine cuisine and relaxation and you will certainly get both at this idyllic retreat. 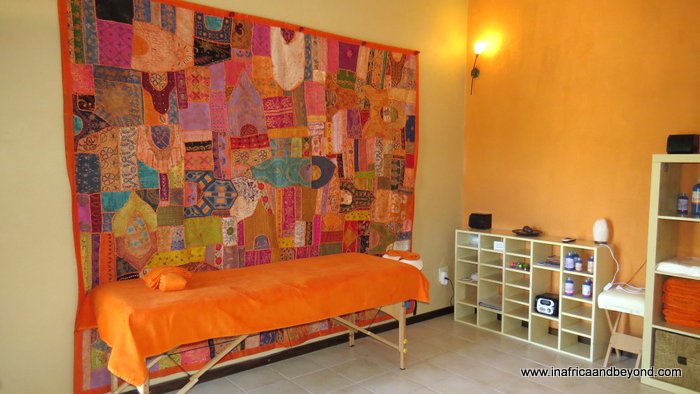