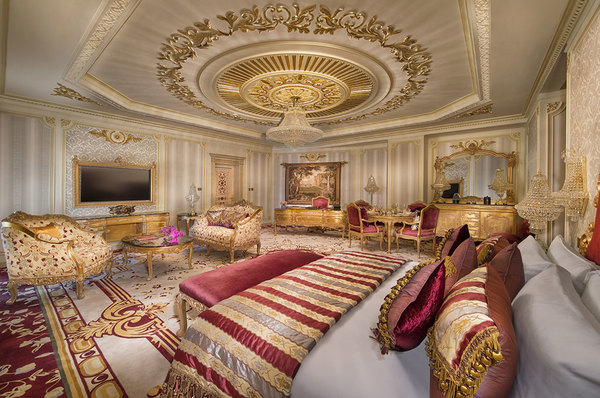 I love staying in hotels but there are times when one gets bored of the same vanilla styling. That’s where the five-star Royal Rose Hotel comes in. Boasting 19 floors and 355 rooms, this opulent hotel is designed in European Baroque style. The meticulously sculpted regal outer façade is coupled with lavish interiors that will be sure to impress you. 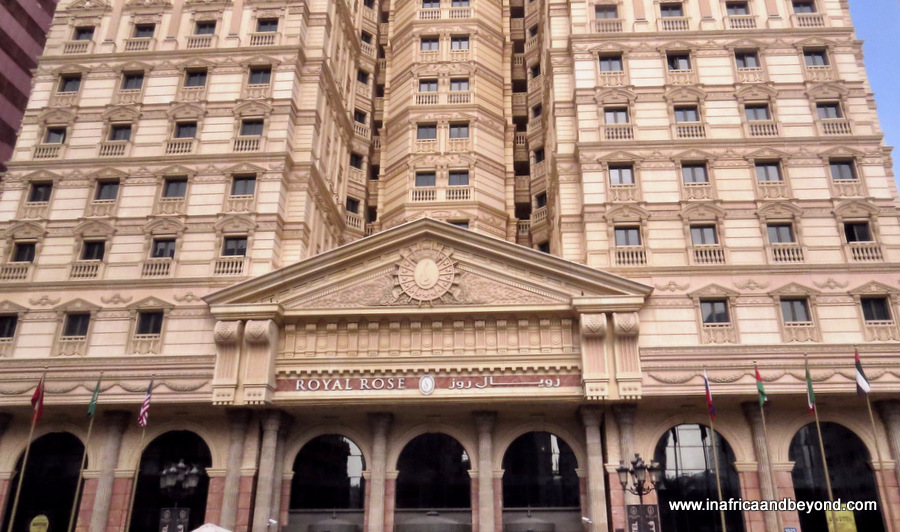 As one enters through the glass doors, one would be forgiven for thinking that one had walked into a French palace. A massive chandelier overlooks the gold and red lobby with the winding staircase.  Ornate marble pillars with intricate gold-leaf designs support the lofty ceiling. Oil paintings adorn the walls of the public areas and the rooms. As it was December, festive decorations hung in the lobby too. The only hint that one was in the Middle East was the welcoming gold trolley with dates and Arabic coffee. 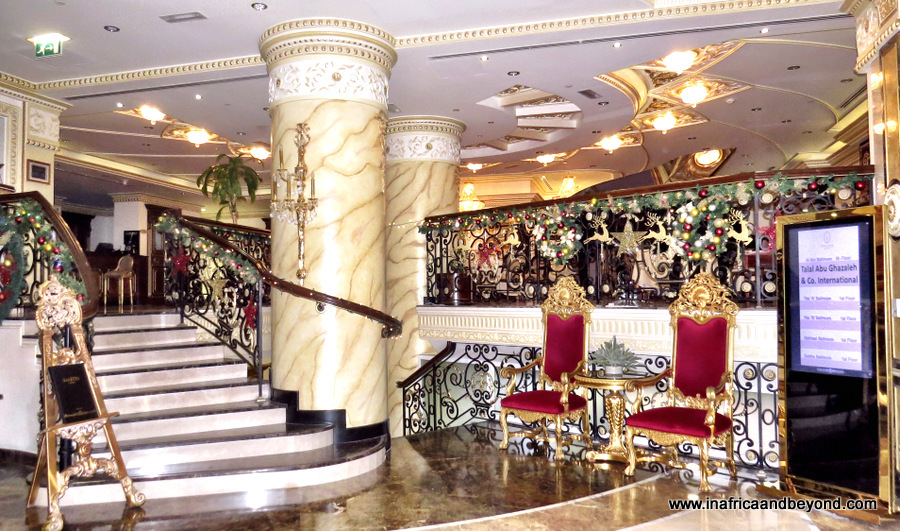 Opened in 2013, the family-friendly Royal Rose Hotel is part of the popular City Seasons Hotel Group and their first five-star offering. Located in the Al Markaziyah District, it is within walking distance of the business hub, government institutions, restaurants and shopping centres. The Abu Dhabi Corniche and other Abu Dhabi attractions, like the Sheikh Zayed Grand Mosque and The Louvre Abu Dhabi, can be easily reached by taxi. 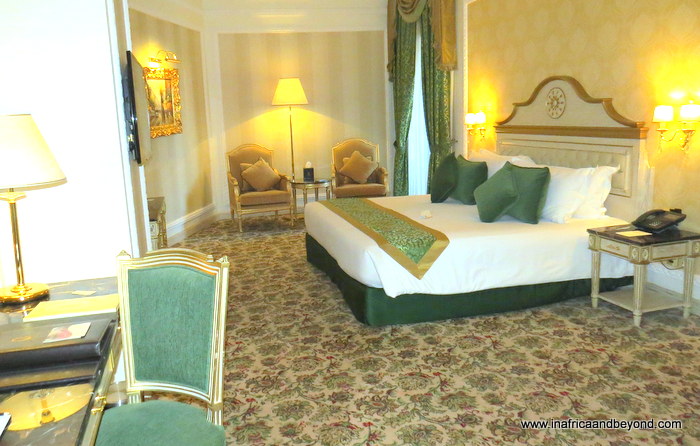 Even though we arrived at the hotel well before the official check-in time, and the hotel was quite busy, our rooms were ready and waiting for us. We had two inter-leading bedrooms, a Grand Deluxe Double Room and a Deluxe Twin Room. Both featured comfortable beds, seating areas and working desks. The connecting doors between the rooms were kept open most of the time, effectively creating a spacious family apartment for us and our children.

The rooms were decorated in green and gold shades, and the floral carpets, wallpaper and elaborate furniture continued to make us feel as though we were in a royal chateau. At the same time, it was not lacking in modern comforts and conveniences. Interactive satellite televisions displayed welcome messages for us. Complimentary wireless internet access, iPhone/iPad docking stations and mini-bars were all provided. 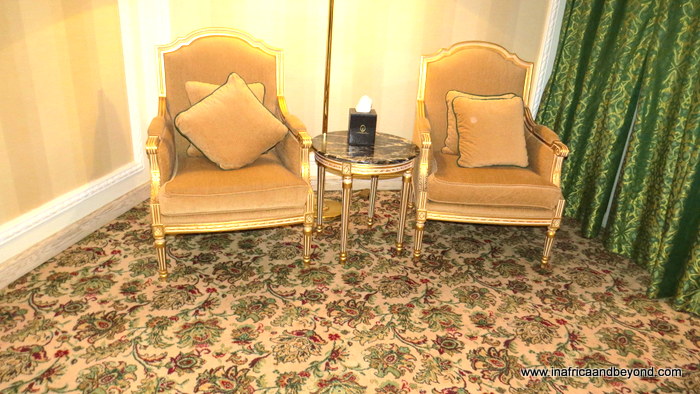 The bathrooms had bath tubs and separate showers. Luxurious amenities and additional thoughtful items like toothbrushes and razors as well as plush bathrobes and slippers were also provided. 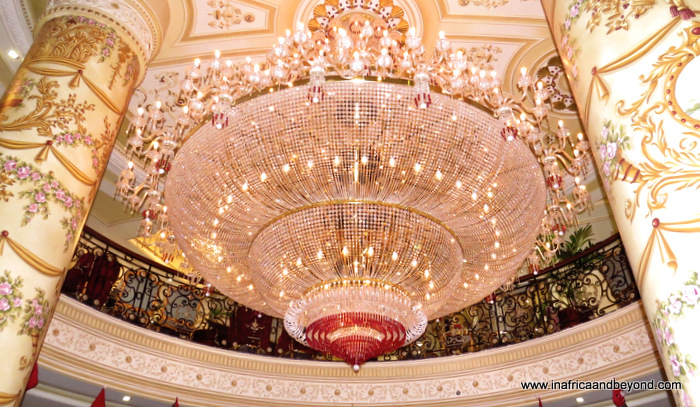 There are two elegant restaurants and a lounge where one can order drinks and light meals.  The deep red and gold Printania Restaurant offers all day buffet-style dining. Arabic and international specialties are prepared at live cooking stations in addition to the buffet offerings. Barocco Restaurant specializes in gourmet European cuisine. The Brasserie overlooks the lobby and serves specialty teas, coffees, cakes and snacks.  We had a huge breakfast at Printania on both mornings. Dishes included noodles, fried rice, vegetables, eggs, meats and pastries. Royal Rose is a dry hotel, which means that no alcohol is served here. For us, this was great as it added to the hotel’s family-friendliness. 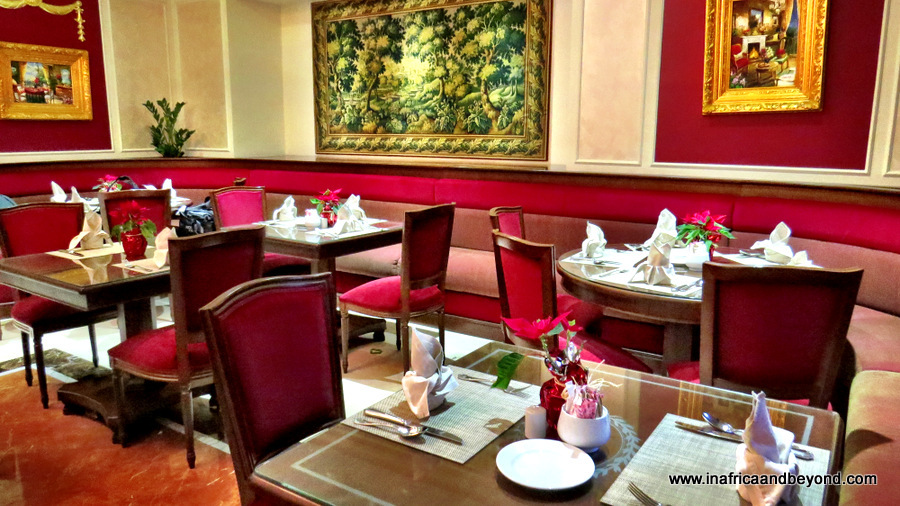 A large swimming pool and a jacuzzi can be found on the rooftop.  Alba Spa offers a variety of treatments, with separate sections for men and women. There is a well-equipped fitness centre too. The helpful Concierge desk will assist you with transport arrangements and other services while the travel desk at the front will organize desert safaris, city tours and other activities. We did a city tour and a desert safari and enjoyed both. 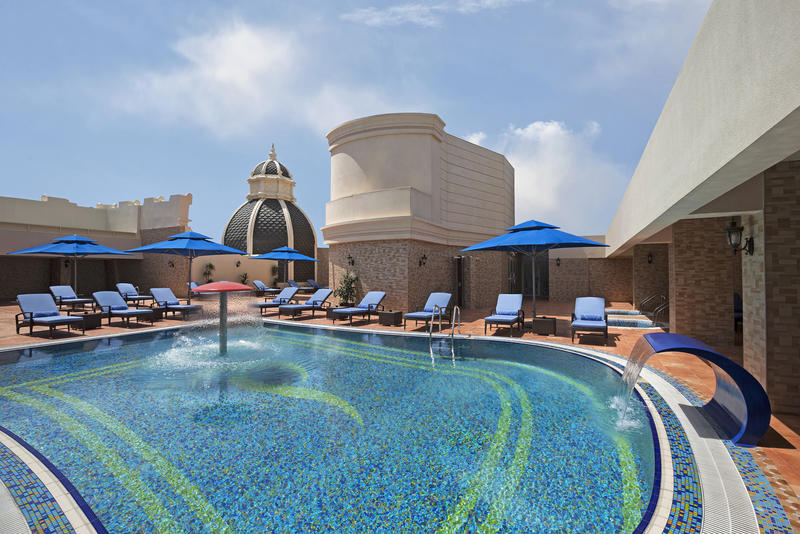 The Royal Rose Hotel is a sensual urban sanctuary with French inspired bling. It is beautiful inside and outside, and a great place to stay if you are looking for five-star luxury with a difference.

Note: Featured image above is of the Royal Suite. 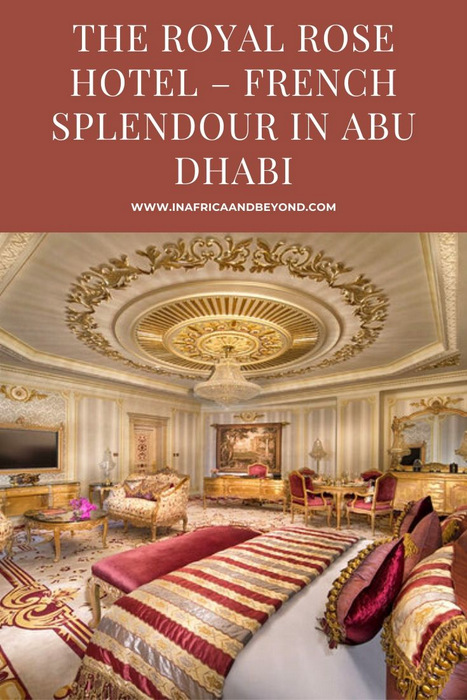