10 Best Things to do in Al Ain 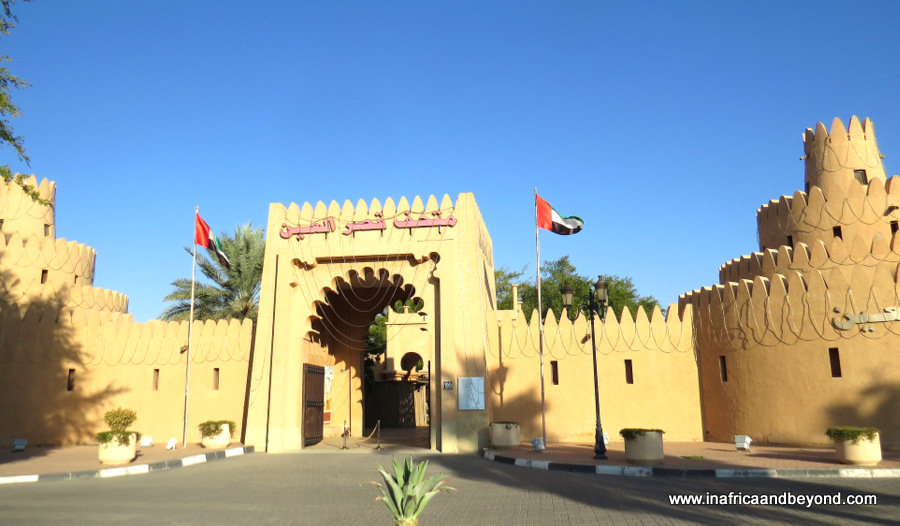 Things to do in Al Ain

The Garden City of Al Ain may not be as popular with international tourists as the glamorous, glitzy cities of Dubai and Abu Dhabi, but it is definitely worth a visit. Al Ain is the fourth largest city in the United Arab Emirates (UAE) and one of its oldest cities. It was once an important oasis for travellers on the caravan route between the UAE and Oman. It is also the birthplace of Abu Dhabi’s ruling family. The city is hydrated by natural springs that originate in the surrounding rocky mountains, giving it its name, which means “The Spring” in Arabic.

During our stay in Abu Dhabi, we visited Al Ain on a day tour with Emirates Tours & Adventures.  Kanhaiya, our driver, picked us up from the Capital Gate Hotel and we set off on the two-hour drive to Al Ain. The vehicle was spacious and comfortable and Kanhaiya was a treasure trove of information about Al Ain and the rest of the UAE. We learnt a lot about the country from him. 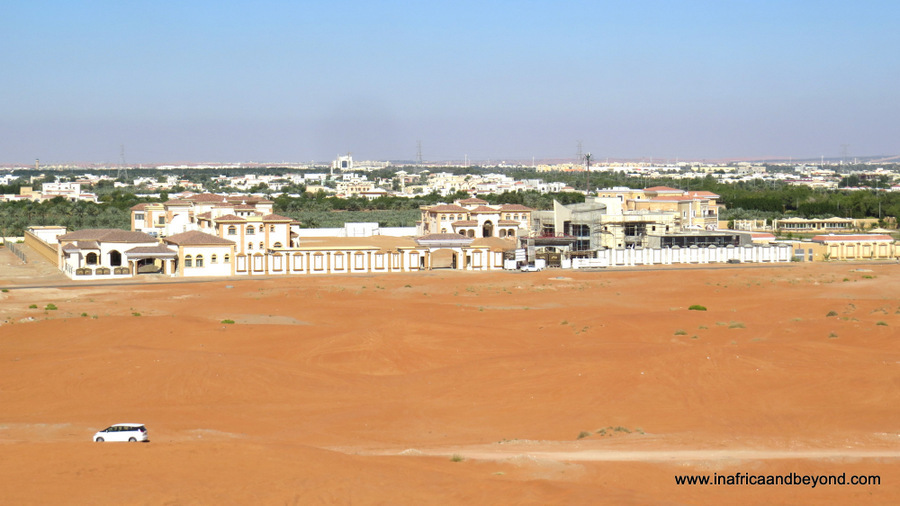 View of Al Ain from the desert dunes 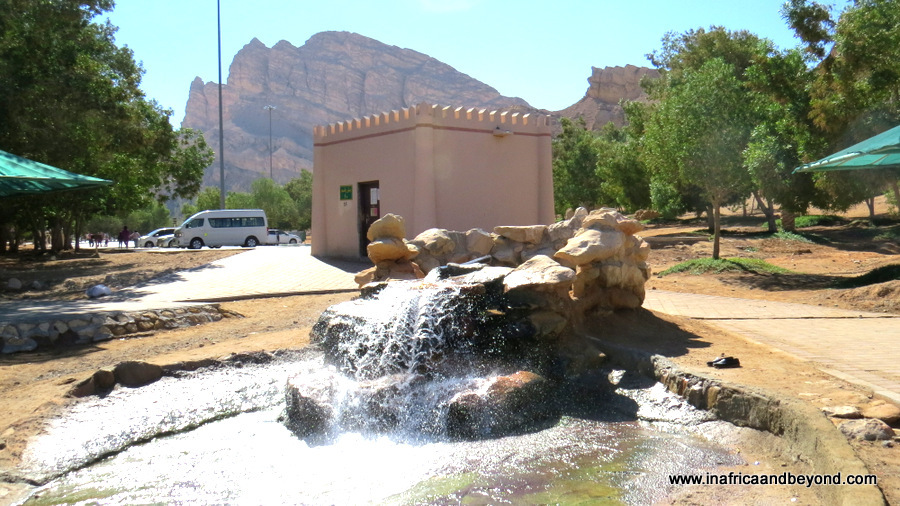 The Green Mubazzarah Hot Springs at the foot of the Jebel Hafeet mountain, attract visitors from far and wide, to its natural hot springs which have healing powers. The verdant landscaped park is a beautiful sight beneath the craggy mountains. We joined the locals who were picnicking there and dipped our feet in the hot water. 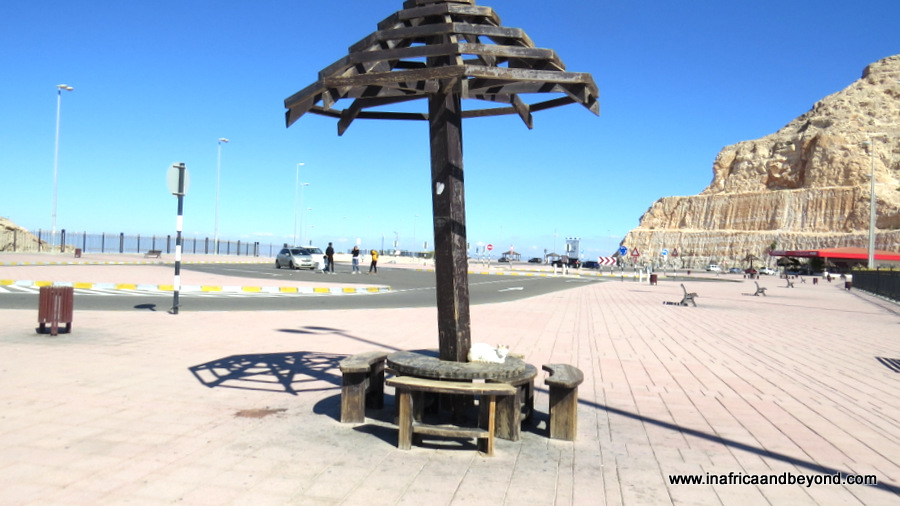 At the top of Jebel Hafeet

Jebel Hafeet is Abu Dhabi’s highest mountain at 1240 metres, and the second highest peak in the UAE. The road which ascends the rocky mountain is considered to be one of the top 10 mountain passes in the world. We ascended this pass to admire the picturesque views from the viewing platform at the top. My kids were equally intrigued by the cats that lived up there.

Jebel Hafeet is a UNESCO World Heritage Site. Circular tombs dating back to 3000 BC can be found on the lower Eastern slopes of Jebel Hafeet, although they can't be seen from the top. Important fossil discoveries have been made in the area. There is a royal palace and a luxurious hotel on the mountain too. 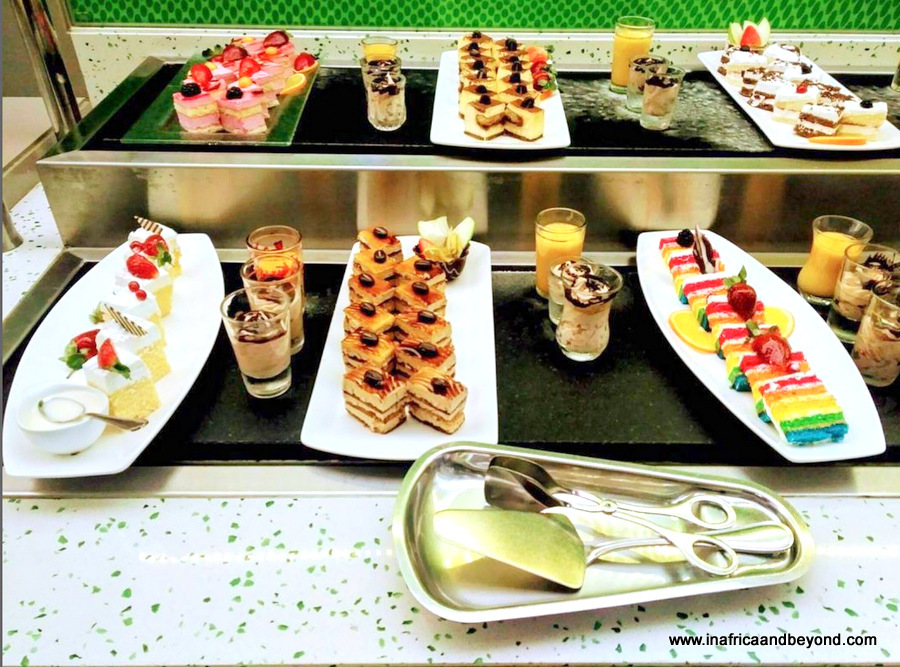 We stopped for a delicious buffet lunch at Sedra Bawadi Restaurant at the 4-star Ayla Hotel. There was a wide variety of traditional and Western dishes, and a delicious array of desserts. 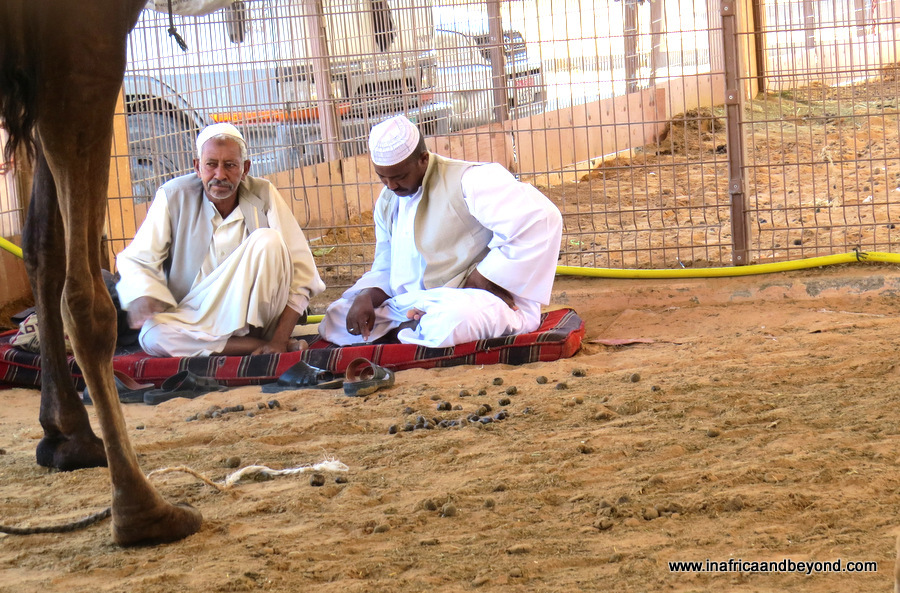 We made a quick stop at the camel souk, the last one in the UAE. It was quiet because it was lunchtime. The traders were relaxing on rugs and the camels, of different colours and sizes, stared at us with their huge eyes. We fed them some grass straws. 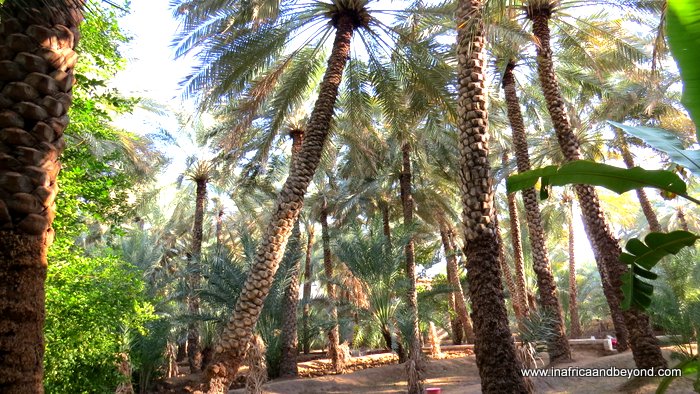 Al Ain lies between the desert and the mountains which provide the springs for its vast oasis in the heart of the city. The oasis contains 147000 date palms and other fruit-bearing trees. More than 4,000 years old, it is one of the world's oldest permanently inhabited settlements. It is also a UNESCO World Heritage site.

Here, you can walk through the shady walkways and see the ancient falaj water systems still in use. This simple system has been used to irrigate crops for three thousand years. Kanhaiya showed us how to make unbreakable ropes from palm fronds, and challenged my son to climb the palm trees using ropes like the locals. He was happy to accept the challenge although not very successful. 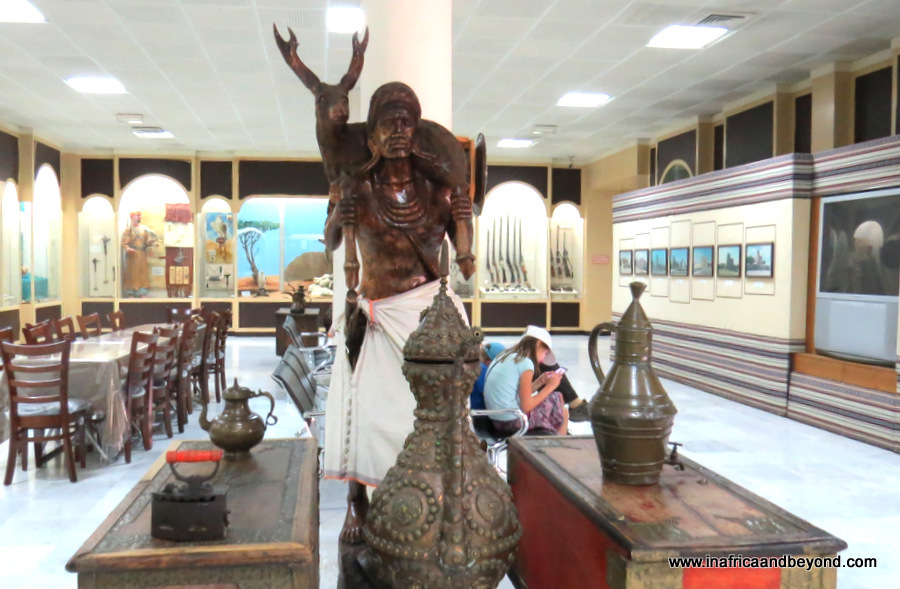 Built in 1910, this is the oldest museum in the UAE. It showcases the history of the Al Ain area with a large collection of historical exhibits, including Bronze Age and Stone Age relics

This mud fort was built in the late 19th century and is one of the most historic buildings in the UAE. It was built to protect the city and its precious palm plantations. The fort resembles a giant sand castle. 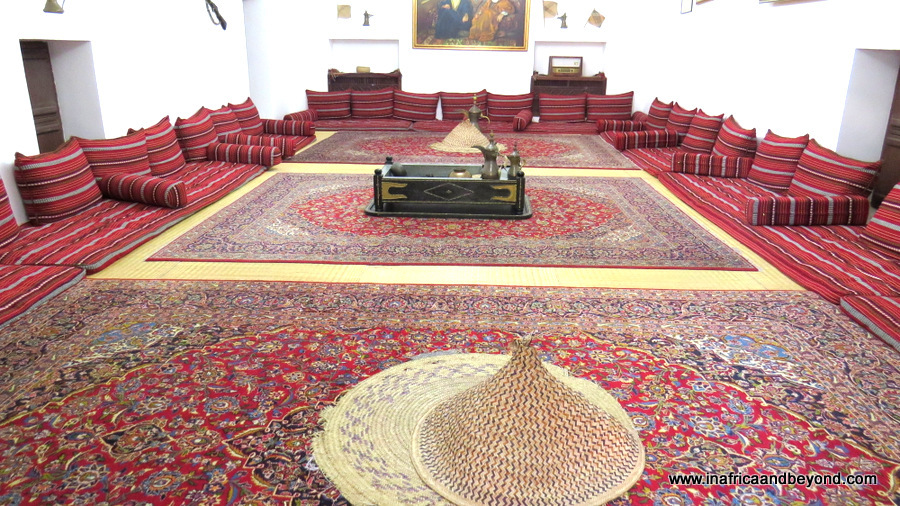 Our last stop was the Sheikh Zayed Palace Museum where the esteemed UAE founder once lived with one of his wives. As we entered, we were offered Arabic coffee and dates, in keeping with the traditional Arab style of hospitality. It was quite fascinating to see the simple manner in which the ruler's family lived before the oil boom. The museum has a large collection of material about the ruling family and one can see their private quarters. 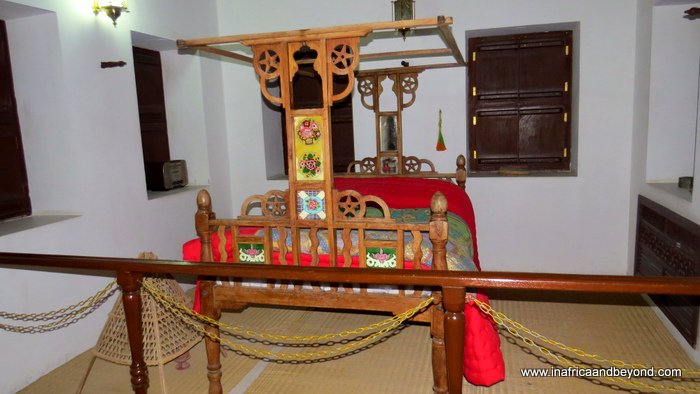 Simple Bedroom in The Palace Museum 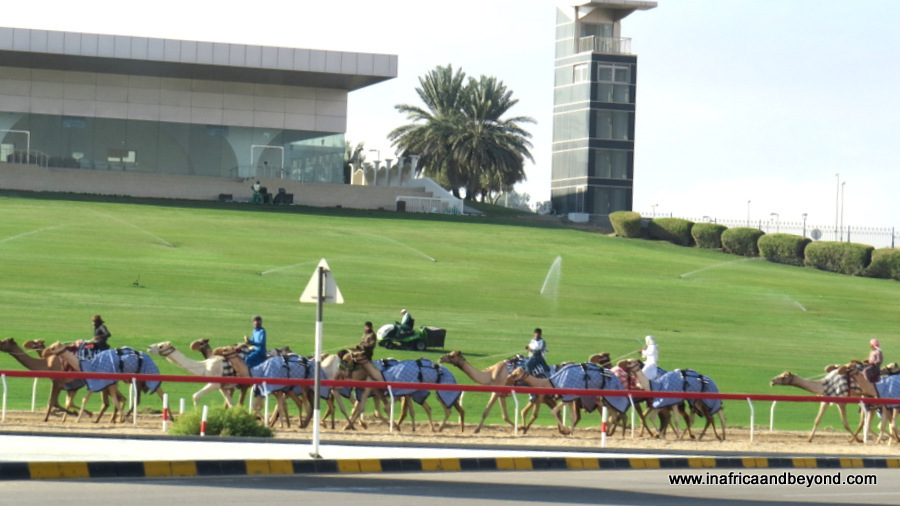 We drove on highways surrounded by the desert, where only jojoba trees grew, and we drove past palm tree plantations too. En route, we stopped to see locals training camels for an upcoming camel race at the Al Marmoum race track. Some of the camels were controlled by robots. Camel-racing is serious business here with more than 150 million Dirhams (approximately 479 million Rands) in prize money. There are more than 200000 camels in the Emirate. 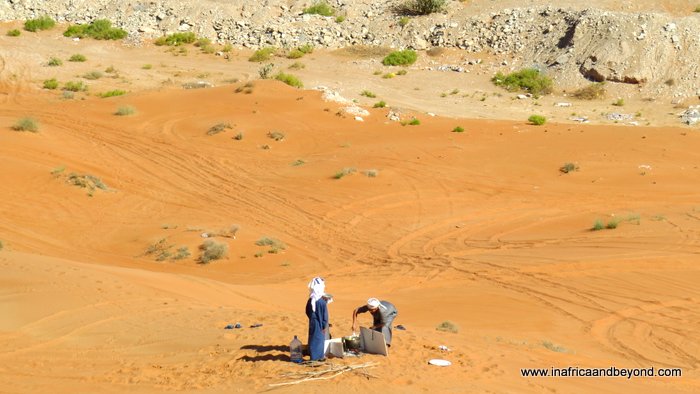 Young boys cooking in the desert

Our first stop in Al Ain was the desert dunes. We passed an impressive outdoor Landrover collection owned by one of the royals. In the desert, we walked in the super-fine sand to the top of a lofty sand dune and got 360 degree views of Al Ain and the rugged Hajar Mountains in the distance. The sand was cooler than expected and we saw some young boys cooking beryani amid the dunes.  Kanhaiya jokingly asked them if we could join them but they politely refused, saying that they had invited some friends over.

Al Ain was fascinating, and so different from Dubai and Abu Dhabi. It is much more traditional and authentic. You won’t see high-rises here because trees are a sign of wealth and the buildings are not allowed to be higher than the trees. The pace of life here is gentler and it is a vestige of what the United Arab Emirates was like before the oil boom. 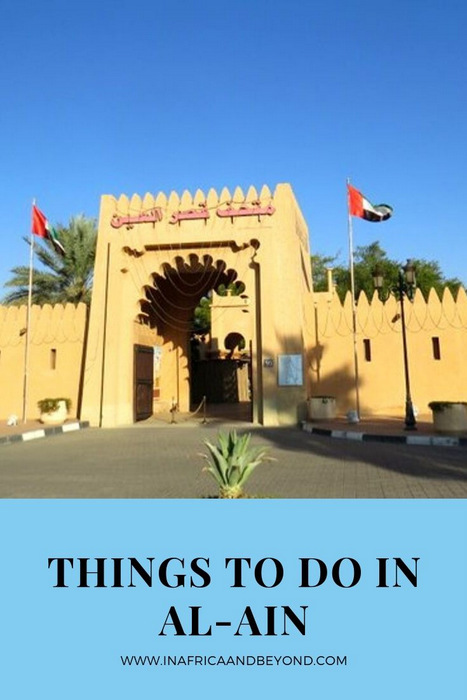 One comment on “10 Best Things to do in Al Ain”