10 Things To Do In Bangkok - With Kids 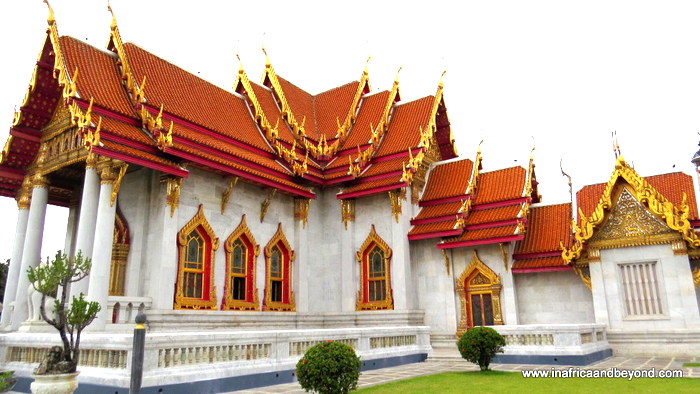 10 Things To Do In Bangkok With Kids (or without)

Bangkok is a vibrant, bustling, multi-faceted city, and a vast, sprawling metropolis, home to modern steel skyscrapers standing alongside traditional tiled temples. It is a city of colourful tuk-tuks, golden spires and delicious street food. It has an infectious energy that draws one in and endears one to it.

Bangkok is often overlooked in favour of Thailand’s more beautiful resort destinations and islands and is used as a mere springboard to them. It may be better known for its more seedy “charms” but it boasts a plethora of family-friendly attractions and activities too. Stay in upmarket areas like the Silom or Sukhomvit areas, as we did, and your encounters with the aforementioned seedy “charms” will be minimal.

We spent four nights there and felt as though we had barely scratched the surface. There are so many things to do in Bangkok that I’d recommend staying for at least a week - from exploring the historic and cultural attractions to indulging in budget retail therapy to your hearts content. 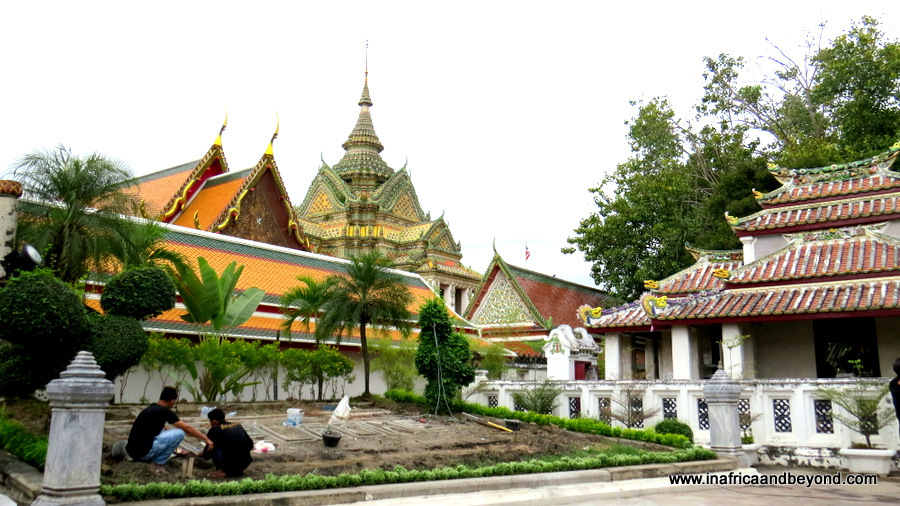 Here are 10 family-friendly things to do in Bangkok

This is Bangkok’s most iconic landmark and an absolute must-see. It is one of the most opulent palace complexes we have ever been to and consists of several stunning gold and jewel-studded, shimmering structures and historical buildings including Wat Phra Kaew (or the Temple of the Emerald Buddha). The craftsmanship is exquisite and we were awestruck. One can easily spend half a day exploring this complex alone. The Grand Palace complex is surrounded by little shops selling refreshments and souvenirs. 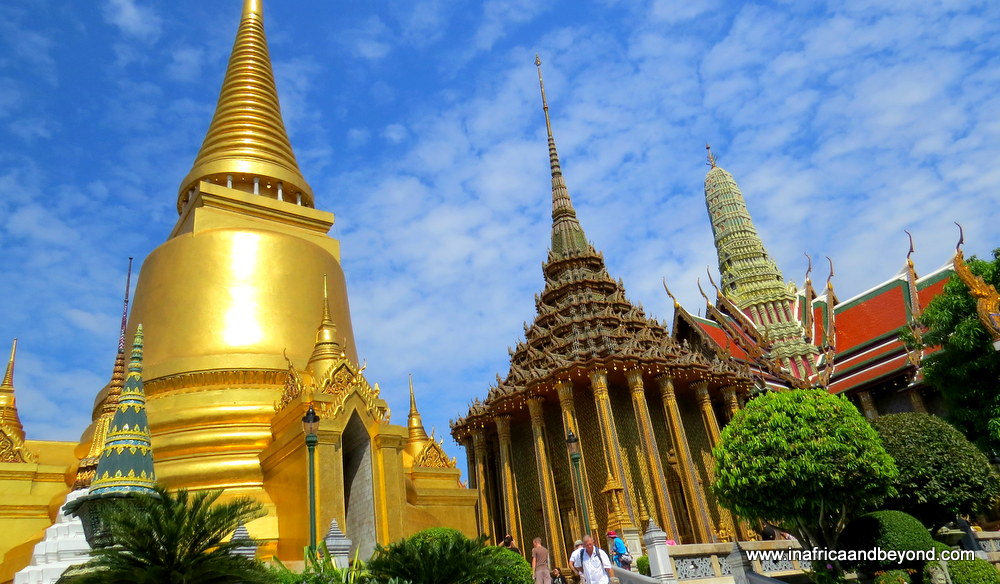 We were there in December, two months after the passing of the beloved king, Thailand’s longest reigning monarch, who had passed away after seven decades on the throne. Mourners, clad in black, streamed in to the Grand Palace complex to pay their respects, in an area not accessible to foreigners. Several held up posters of the king. Their love for him and their grief at his passing were evident. 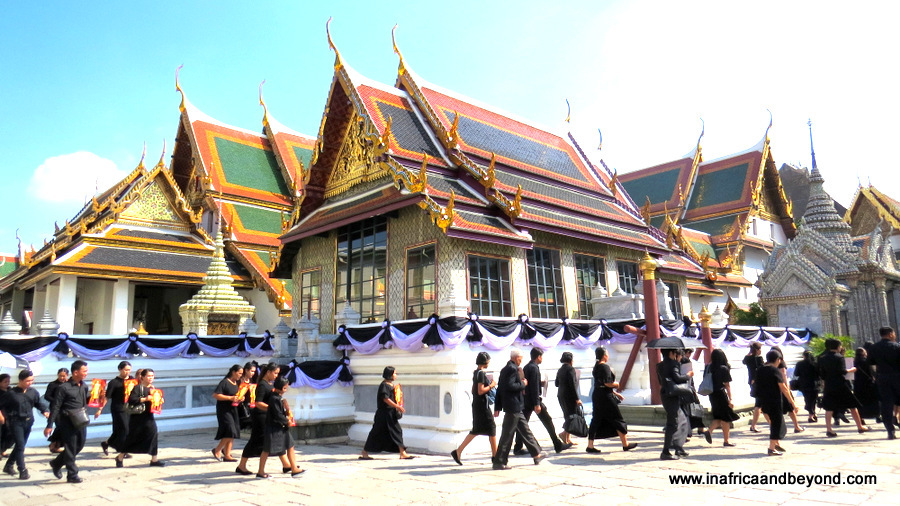 Mourners stream towards the Grand Palace in Bangkok to pay their respects to the beloved late King.

2. Glide along the Chao Phraya River

Hop on and off the Chao Phraya Express as you glide along the city’s main river and see the city from the water. As we had to cross the river to go to the Grand Palace, we did these simultaneously. The view of the skyline is amazing and the traditional boats along the river make for great photo opportunities. 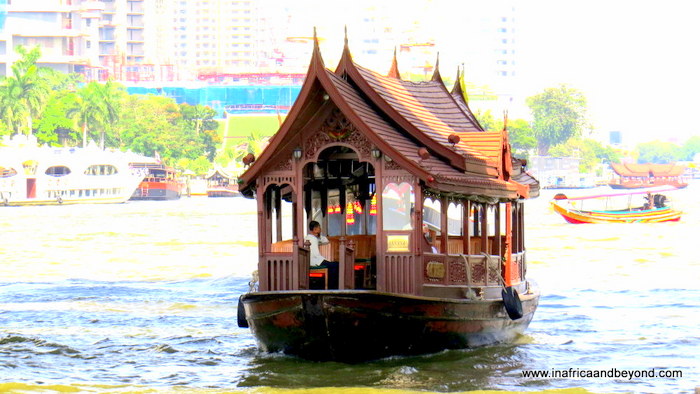 No visit to Bangkok would be complete without visiting some of its temples. Their architecture is unique and they give one an insight into the local beliefs and culture. It is also quite intriguing to see monks dressed in traditional saffron robes taking selfies with their smartphones at the temples. Some of the most famous temples are Wat Pho (the Temple of the Reclining Buddha), Wat Benchamabophit (Marble Temple) and Wat Traimit. 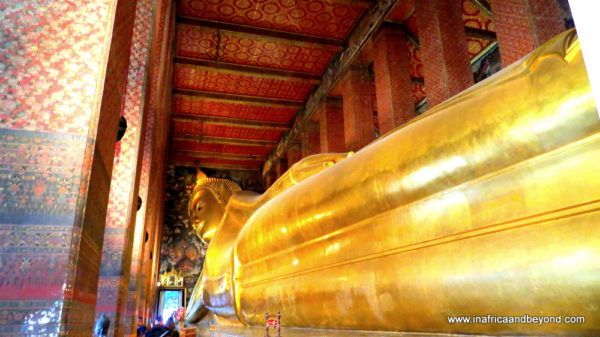 Wat Pho features one of the largest Buddha statues in Thailand. The reclining Buddha figure is gilded and measures 15 m high and 46 m long. 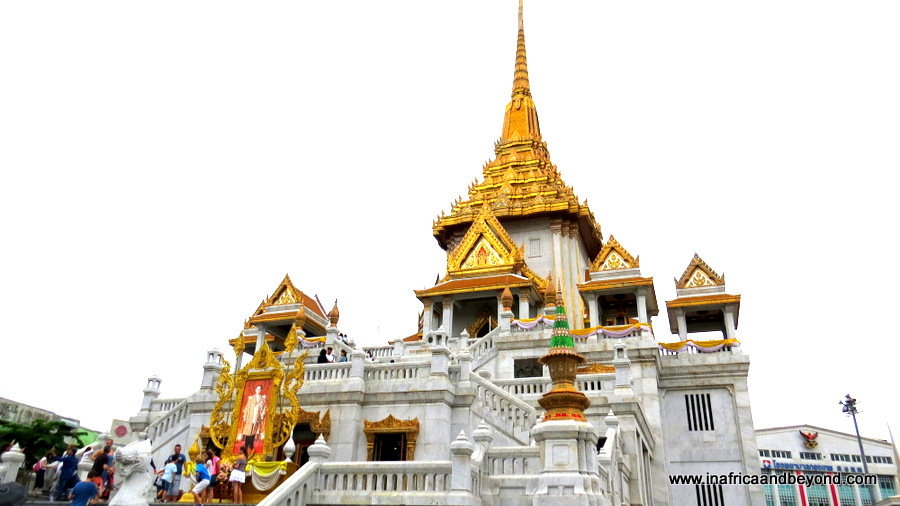 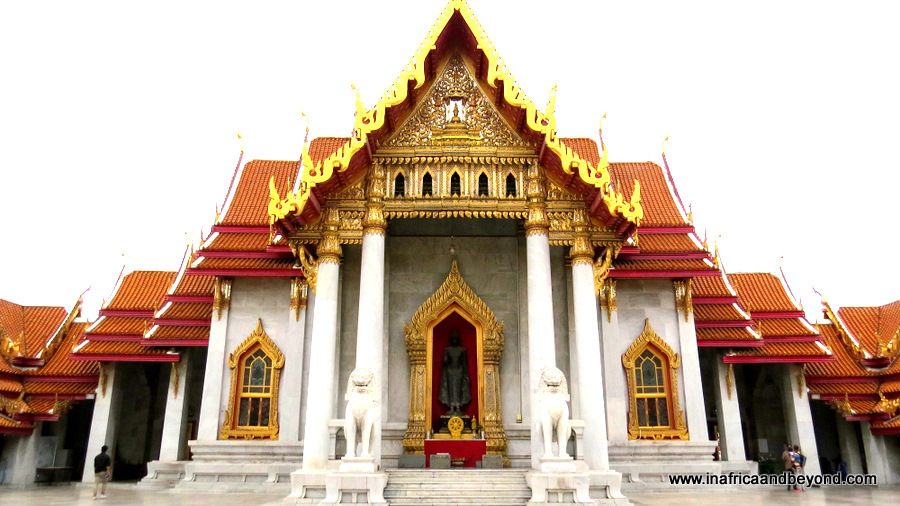 Wat Benchamabophit is an opulent marble temple. Wat Arun is another picturesque temple, especially at night, but it is currently undergoing renovations so we just saw it from the river.

4. Shop till you drop at the world’s largest weekend market

Bangkok is regarded as a shoppers paradise. The markets come in many varieties – day, night, weekend and floating are some of them. You can burn your bahts at the world’s largest weekend market, the Chatuchak Weekend Market, which has over 15000 stalls selling almost everything imaginable. We drove there on a Sunday afternoon with Uber, a few hours before it closed, and we saw a mere fraction of it. 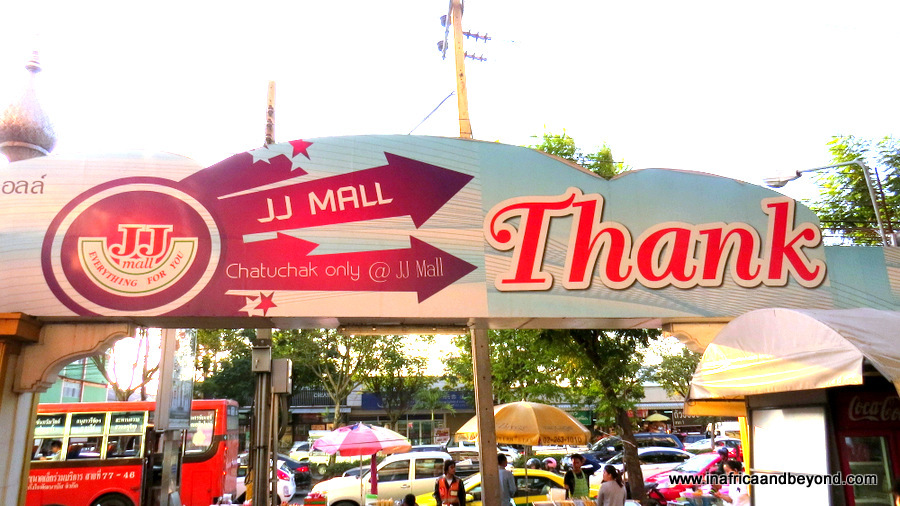 5. Experience a more traditional kind of retail therapy at the Floating Market

Photos of the exotic floating markets were one of the main attractions that lured me to Bangkok and I had to go and experience them for myself. Bangkok has several floating markets but Damnoen Saduak, located about 100 km away, is probably the most popular one in the surroundings. We went there on a half day tour. En route we visited a coconut farm and saw how coconut sugar was made. (I had no idea there was such a thing). 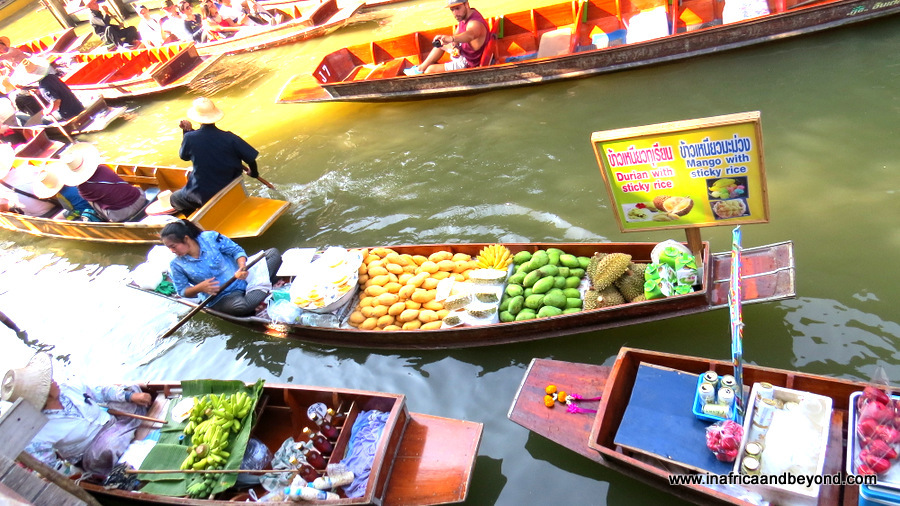 The Floating Market in Damnoen Saduak

Near the floating market, we stopped and took a longtail boat to the market. We passed traditional houses where the locals living there went about their daily chores as we sped through the water. At the market, Thai women in bamboo hats sold fresh produce, Thai delicacies and other items from canoes as they paddled along the water. Our tour guide told us that there were several floating markets that had already closed down. Even the one we visited would probably not be around in 20 years as many of the vendors were old. Once they passed on, their children were not likely to continue this tradition. The market was rather crowded with tourists – nevertheless I still enjoyed the experience. 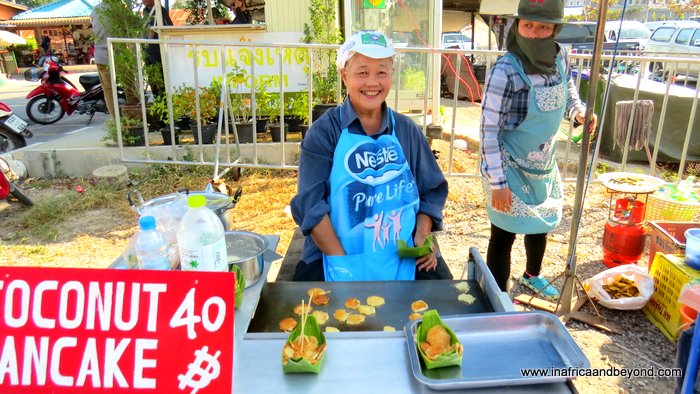 I bought delicious coconut pancakes from this beautiful lady.

Most major roads and markets have street vendors standing at carts piled high with tantalising street food. The variety is astounding and you will find umpteen noodle varieties, exotic fruits, grilled seafood, satays and even drinks. We enjoyed many of them and indulged in a lot of iced coffee too, which is freshly made hot instant coffee, cooled with ice cubes and sweetened with loads of sugar. 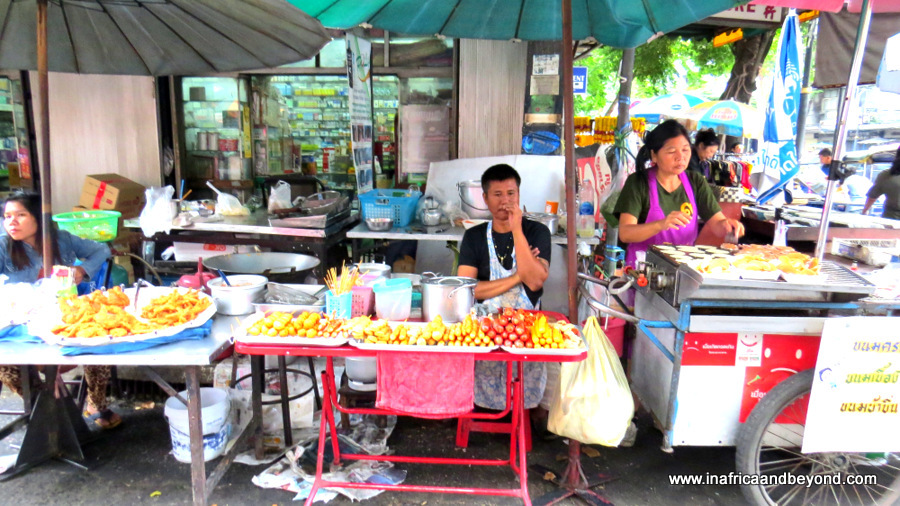 In Thailand, massages are considered to be more of a health necessity than a luxury which is why I have never seen so many massage parlours in one place as I did in the streets of Bangkok. There are neon signs advertising Thai massages everywhere. What’s more, they are quite cheap at around 250 bahts (R100) for a one hour massage. I went with my daughter. We were told to leave our clothes on and the therapists proceeded to work on us.

Thai massage is a combination of acupressure, reflexology and yoga techniques. Instead of a relaxing muscle rub, our bodies were compressed, pulled, stretched and twisted. When it was over, we laughed about the whole experience. Magically, I felt re-energised too. If you need some relaxing downtime amid nature, Lumphini Park is a wonderful green oasis in the heart of the bustling city where people come to jog, exercise, socialise and play. The lush greenery surrounds a lake where you can go on a boat ride, and see ducks and water monitors too. It was near our hotel so we took a walk there but you can also get to the park via the skytrain. 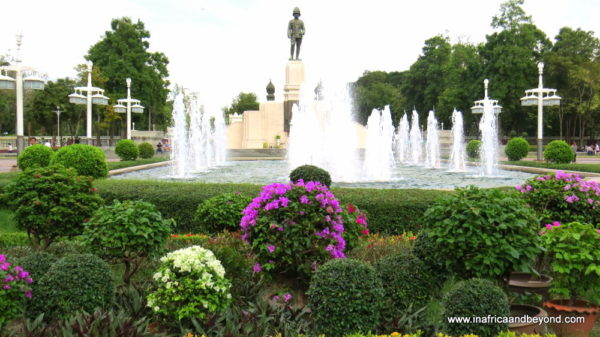 Although we do have them in South Africa, the experience in Bangkok will be totally different. The tuk-tuk drivers here are daredevils who race frantically through the traffic, finding back roads and alleys until they get you to your destination – in one piece, albeit a bit shaken up. Many are uniquely decorated. My kids enjoyed it and so did we. 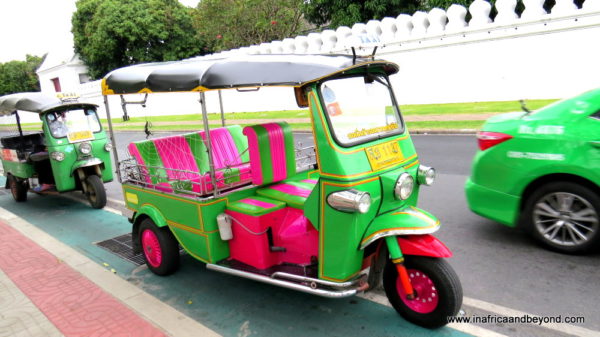 10. Walk and explore the side streets and street markets

Bangkok is so different from African, European and American cities. Walking and exploring the side streets and street markets will reveal so many different things about the city. Tradition combines beautifully with modernity here and there are surprises – and photo opportunities - on every corner.

These are just some of the things to do with kids in Bangkok .  Had I known there was so much more to do there, I would have definitely stayed longer. 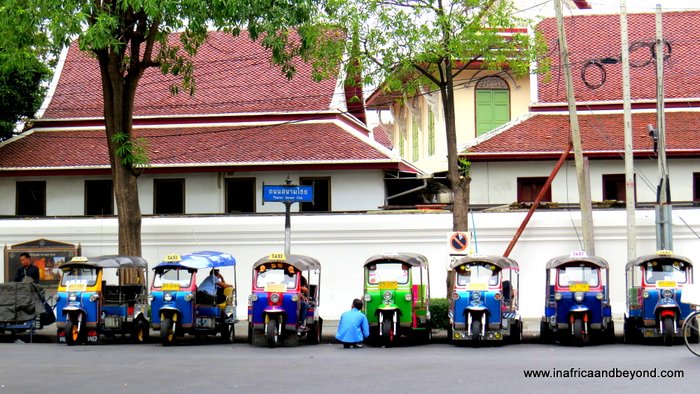 Here's a great guide on Planning a trip to Thailand .

Looking for a place to stay in Bangkok?

Click here for the best flight deals to Bangkok.

For places to stay in Bangkok, click here or here.

Have you been there? What are your favourite things to do in Bangkok ?

Disclosure: Some of my activities were sponsored however all opinions are my own.