5 Things to do in Foz Do Iguacu 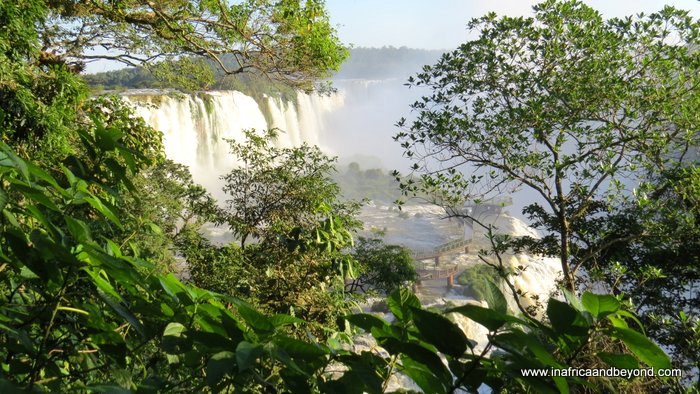 Things to do in Foz Do Iguacu

While doing research on Brazil and Argentina, the Iguacu Falls (also spelt Iguazu Falls and Iguassu Falls) seemed to come up all the time. After reading about it and seeing some photos, I decided that I had to include it in our itinerary too. Now that we have been there, I can safely say that it was the best decision. Mere words and photos cannot do justice to the Iguacu Falls and it is something that has to be experienced in person. Foz do Iguacu was our base for visiting the falls and we soon discovered that although the waterfalls were the main attraction, there was a lot more to do there.

The Iguacu Falls are a spectacular series of 275 cascading waterfalls which cover almost 3 kilometres along the Brazil - Argentina border. They are located in the Parque Nacional do Iguaçu (Iguacu National Park), a UNESCO World Heritage Site, within the tropical Atlantic Rainforest. The forest is also home to exotic wildlife including jaguars, pumas, and toucans. Recognised as one of the New 7 Wonders of Nature, the Iguacu Falls are one of the most magnificent natural sights in the world, attracting over a million visitors a year.

Although they can be seen from Brazil or Argentina, the views are very different and both sides must be experienced. When former US First Lady Eleanor Roosevelt first saw these falls, she is reported to have said “Poor Niagara”.  My family and I were spellbound, awestruck and mesmerised. We would strongly recommend that the Iguacu Falls should be on every traveller's South America bucket list. 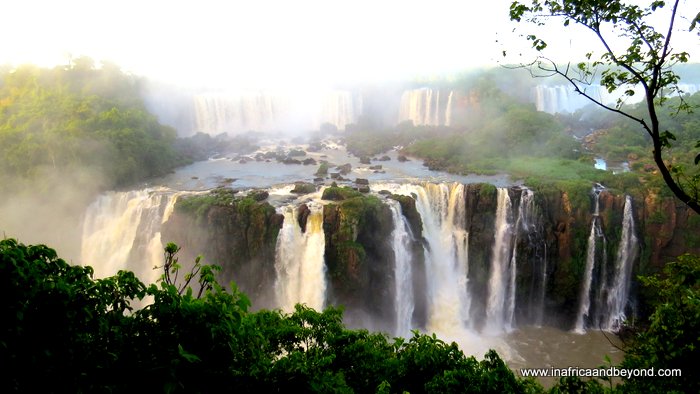 Hot Tip: Stay at the exquisite Belmond Hotel Das Cataratas if you can. You will have access to the falls before and after the day visitors enter the park.

This exciting activity is a unique way to experience the waterfalls, up close and personal. It culminates in a boat ride under the waterfalls. We took the complimentary park bus from our hotel to the Macuco Safari Station, where we boarded an electric train with open wagons from where we could admire our surroundings. 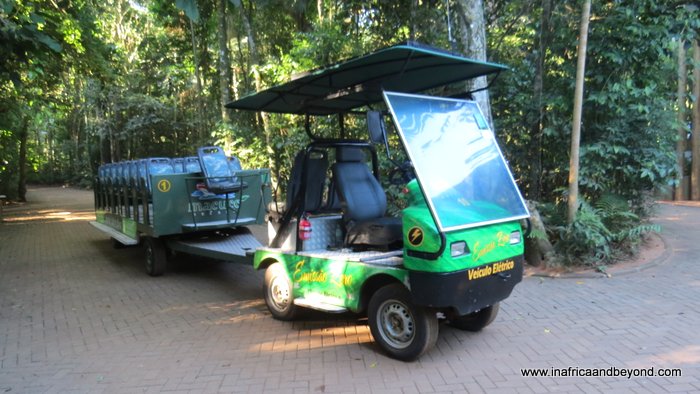 After a short ride through the rainforest, we disembarked and proceeded to take a walk as our guide showed us around. Being a wildlife addict, a part of me hoped that we would see one of the jaguars that lived there but that didn't happen, although we did see signboards carrying warnings of what to do in the event of jaguar encounters.  We hiked to a solitary waterfall, then to the boat station, where we were given lifejackets before we boarded the motor boat.

The boat ride was exhilarating and our driver “bounced” the boat on the river several times as we sped to the falls. Everyone on the boat was laughing. When the driver and photographer donned their rain suits, we knew that we were in for a very wet time. Then we sped into the falls and got thoroughly drenched. We took a 360 degree turn and then we were back under the falls again…and again. Eventually we returned to the boat station. Fortunately, the hot sun dried us up within minutes. It was great fun. 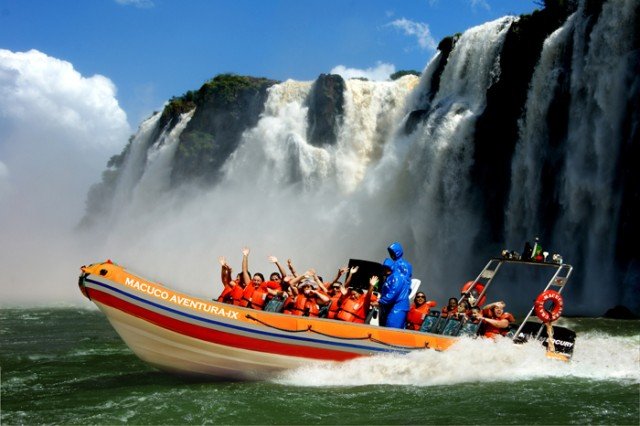 Parque das Aves is the largest bird park in Latin America and an internationally recognised rescue and conservation centre for birds, located in the middle of the rainforest. It was started in 1994 by Dennis Croukamp (from Namibia) and his wife, Anna. We did the Backstage Experience , an interactive behind-the-scenes tour which includes access to restricted areas, and feeding of toucans, ibes and flamingos. 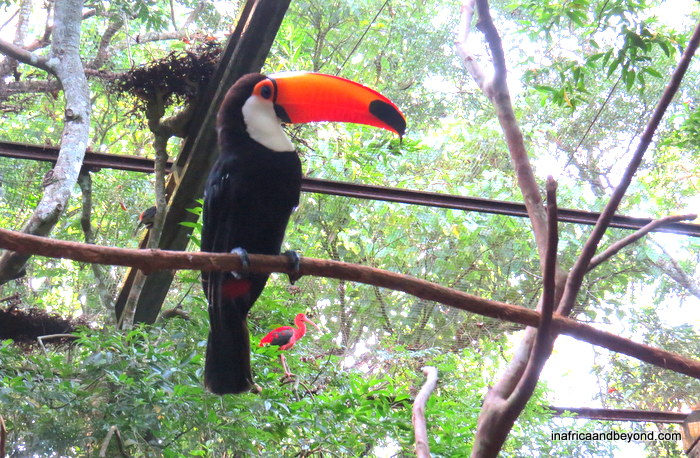 The staff are passionate about their jobs and our guide Luise shared loads of interesting information with us. We had never seen so many beautiful birds in our life and feeding them was a special, intimate experience.  My kids especially loved it and my daughter considers it her favourite part of our 3-week trip around South America and the UAE. The tour ended with a light but delicious al-fresco breakfast. This is a must-visit attraction in Foz Do Iguacu . 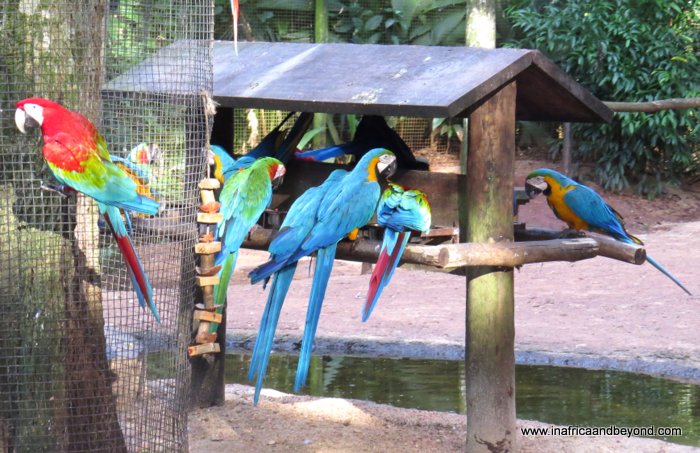 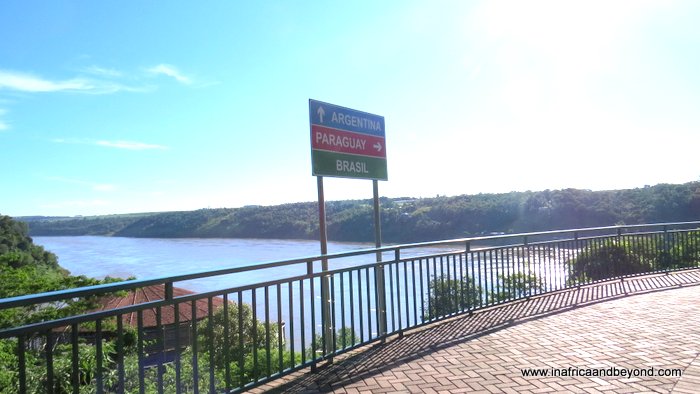 The Three Borders Landmark was inaugurated in 1903. As the name suggests, it is the place where three countries (and two rivers) come together. Foz do Iguaçu in Brazil, Ciudad del Este in Paraguay and Puerto Iguazú in Argentina meet here, separated only by the Iguaçu and Paraná rivers.  Each city is characterized by an obelisk in the flag colors of its country. It was the first time we had been to a place from where we could see three countries at the same time. Also at this complex is a museum, a kids playground, restaurants and a theatre screening Portuguese documentaries about the history of the landmark. 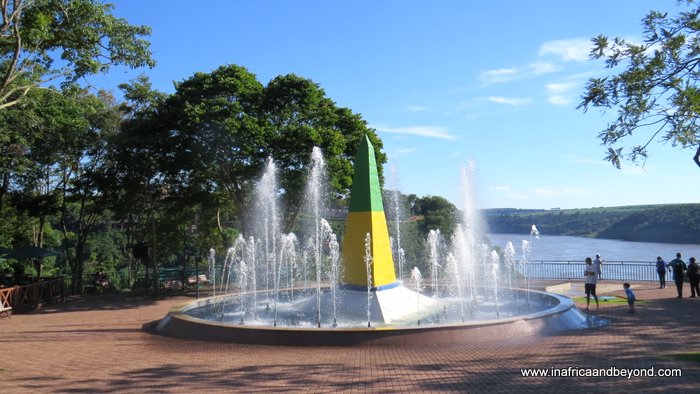 Itaipu Dam is the second largest hydroelectric dam in the world and one of the Seven Wonders of the Modern World. It  supplies Paraguay with almost 90 percent of its power and Brazil with approximately 25 percent. We went on a panoramic tour of the facility. The tour begins with a movie presented in a theatre, which tells the story of the construction of the dam, and some of Itaipu's current work. Visitors are then taken by bus to observation points, which allow different points of view of the construction, and a view of Lake Itaipu. Itaipu Dam is an engineering marvel but it is most impressive to see when the water is in full flow. 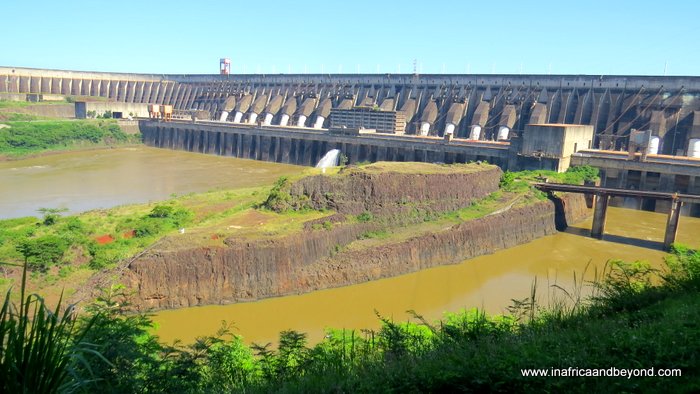 For more information on these attractions, go to Visite Foz.

2 comments on “5 Things to do in Foz Do Iguacu”