11 Best Things to do in Porto 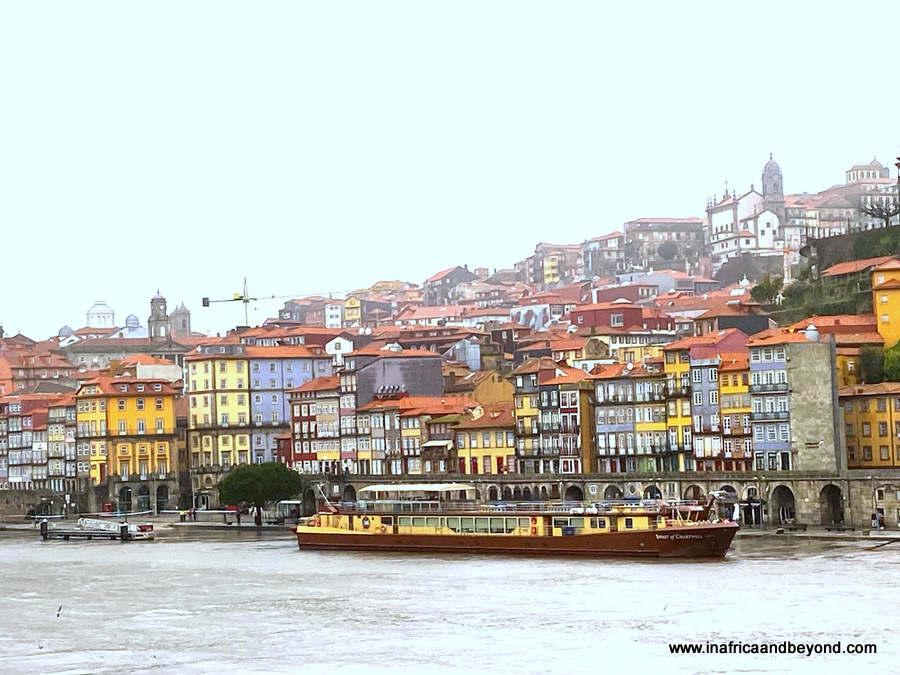 The best things to do in Porto

The most beautiful bookshop in the world…

The most beautiful McDonalds in the world…

One of the most beautiful railway stations in the world…

One of the most beautiful coffee shops in the world…

One of the most beautiful streets in the world…

Porto’s list of accolades reads like the Curriculum Vitae of a well-heeled candidate. And these are not just in my humble opinion. They’ve been confirmed by big names like Travel & Leisure, The Telegraph, Business Insider and Time Magazine. In Porto’s case, the position it achieved was another feather in its cap. It was voted the best European destination three times in the prestigious European Best Destinations awards, having beaten better-known cities like London, Paris and Rome.

It was also recently named European City of the Year at 2020 Urbanism Awards. One thing is certain, Porto is one of the hottest destinations in the world to visit right now. 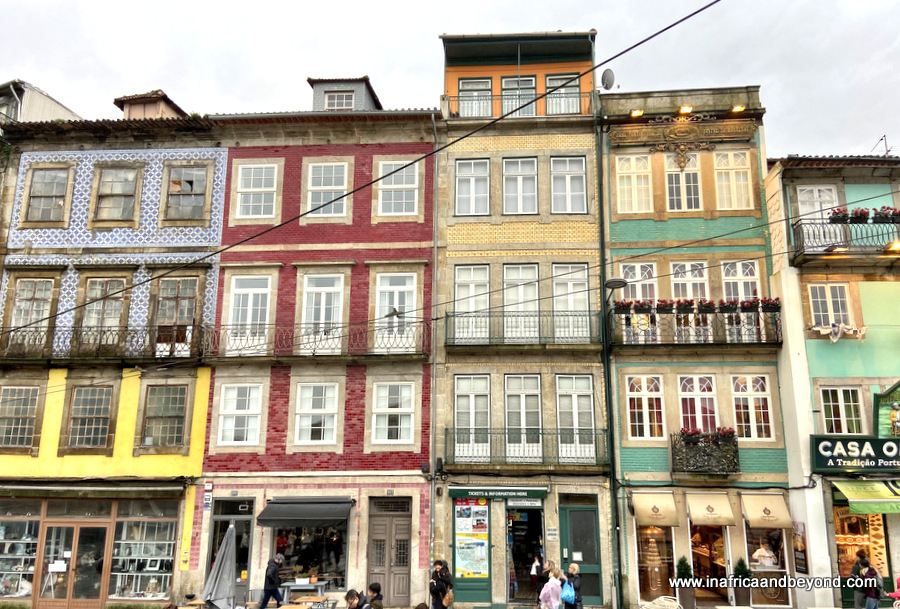 The second largest city in Portugal, Porto boasts some of the world’s most beautiful structures and scenery. Built on the banks of the River Douro, its historic centre is a Unesco World Heritage site, with medieval alleys, cobbled streets, and baroque architecture covered in Azulejo tiles. Colourful and picturesque, there are photo opportunities around every corner.

We visited in December, and even though it was cold and wet most of the time, we still managed to do quite a bit during our two days there. I would love to return to experience Porto in Spring or Autumn.

1. Step into a world of magic at Livraria Lello

Stepping into Livraria Lello is like going through a magic portal into the Hogwarts library, or perhaps Flourish and Blotts. This art nouveau bookshop in Porto dates back to 1906, although the owners opened their first bookshop in the 1880’s. It was named the world’s most beautiful bookshop by The Telegraph and CNN, and the worlds coolest bookstore by Travel and Leisure. It has also been recognised as one of the as “one of the most beautiful bookshops in the world” by Time Magazine,  The Guardian, and Lonely Planet.

It certainly is one of the most beautiful bookshops we’ve ever visited. The iconic staircase, stained-glass skylight and neo-Gothic decor all enhance its charm. It is this magical beauty that is believed to have inspired J K Rowling to write the Harry Potter series, during the period when she lived in Porto, working as an English teacher.

This worldwide claim to fame attracts hundreds of people to the bookshop everyday. As most of them came just to take photographs, the store introduced a 5 Euro entrance fee. However, this can be used as a credit towards your purchase from the store. The fee is no deterrent to most people though, and it is still very busy.

We were lucky enough to be given special entrance and a guided tour before the store opened to customers. For Harry Potter fans like my children and I, this was an amazing experience. When visiting, do look out for the Harry Potter room, the first editions room and the store’s own signature editions. My kids both bought a signature edition each and I got myself a book about the store.

2. Marvel at the opulence of the Palacio Da Bolsa (Stock Exchange palace) 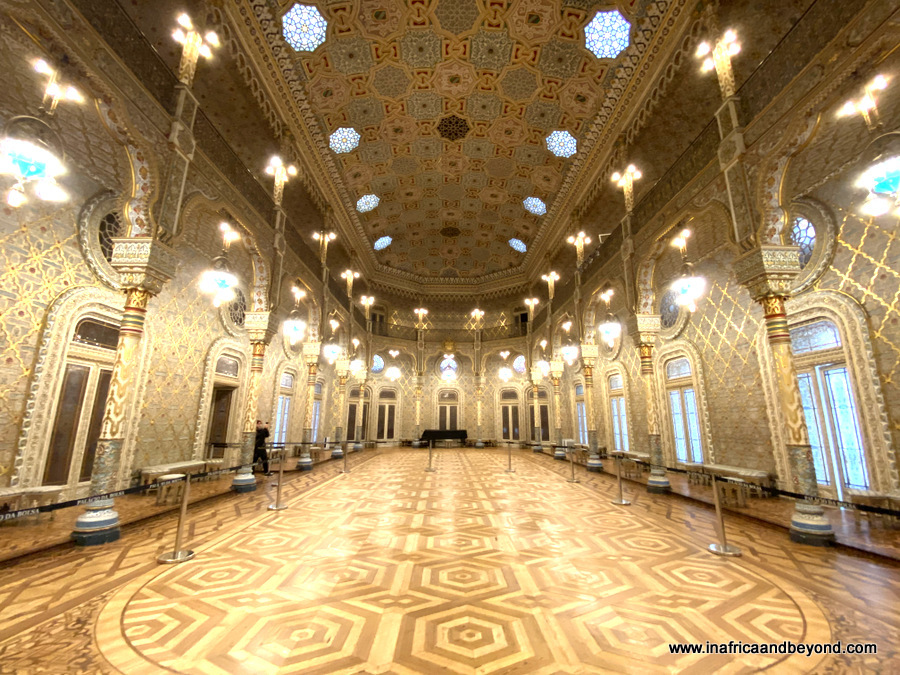 This nineteenth century Neo-Classical building was built on the ruins of the St Francis Convent, which burnt down during the Liberal Wars. One of Porto’s most lavish buildings, it is unusual in the sense that it was a former stock exchange built by traders, not royals. Guided tours are offered in the palace, which currently serves as the headquarters of Porto’s Commercial Association.

The star of the palace is the Arabian room, a 300 square metre room which was inspired by the Alhambra in Granada, and designed to impress. You will also see the large glass-enclosed courtyard known as the Courtyard of the Nations, the Golden Room, which is covered in gold-leaf, and the General Assembly Room with its wood-panelled façade. 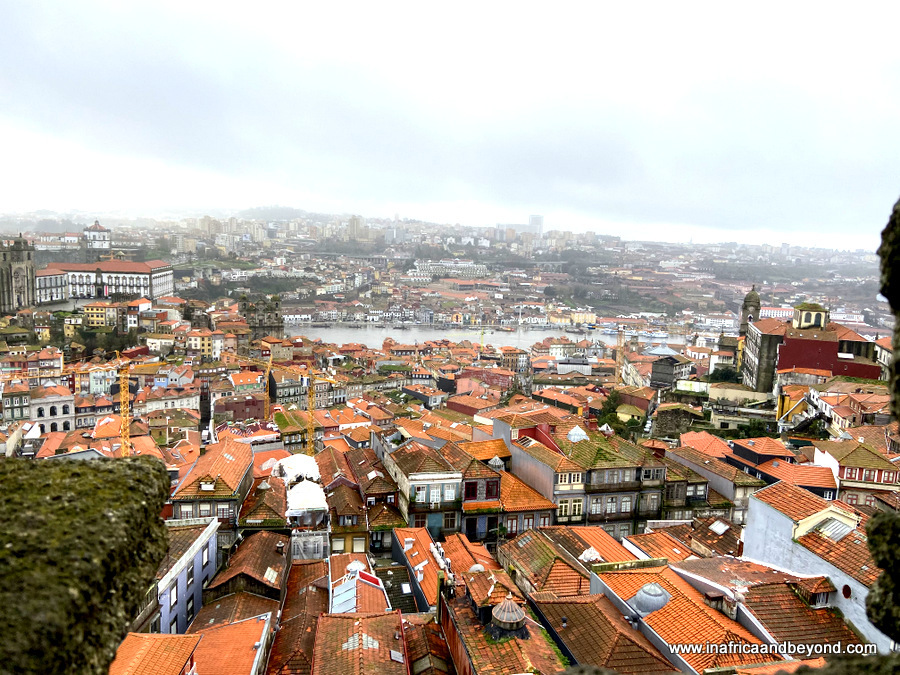 This is the tallest monument in Porto - a tall bell tower belonging to the Church of Clerigos, a Baroque church built in the 18th century. We climbed up the steep 254-step staircase, to get 360-degree views of the city below. From the top, we could see the orange-tiled rooftops, the river and other Porto landmarks. There were interesting historic exhibitions along the way to the top.

Fun Fact: In 1917, two Spanish acrobats -a father and son – successfully scaled the tower in front of a huge crowd.

4.     Learn about the history of Portugal in graphics at Sao Bento Railway Station

Sao Bento Railway Station is often listed as one of the most beautiful railway stations in the world by prestigious publications like Travel & Leisure. On stepping into the station, you'd be forgiven for thinking that it is a museum or art gallery. The walls are covered with 20000 tiles illustrating the country's history. On the day, we visited the station, the local police had set up a band and were playing musical instruments for the spectators. It was lovely.

5. Stroll along the Cais da Ribiera 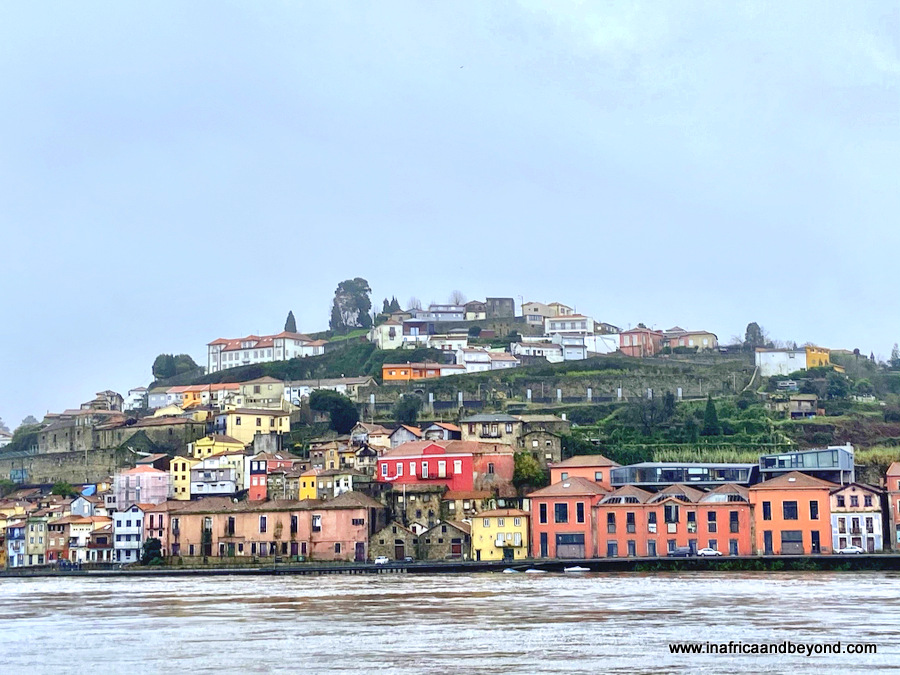 Situated on the banks of the river Duoro, the Cais da Ribiera is one of Porto’s most authentic and picturesque neighbourhoods. It was photos of the colorful buildings in the Ribiera area that first made me want to visit Porto. In fact, Conde Nast Traveler named the Cais Da Ribiera as one of the most beautiful streets in the world.

If the weather is good, a cruise on the river is a must. You will be able to see Porto's six magnificent bridges while getting a nice break from navigating the city’s hilly streets. A cable car ride on the Teleférico de Gaia is also recommended.

Tip: To get the best views and photos of the colourful Ribiera area, you will need to be on a boat on the river, on the Dom Luis bridge or in Gaia.

6. Travel back in time on the tram 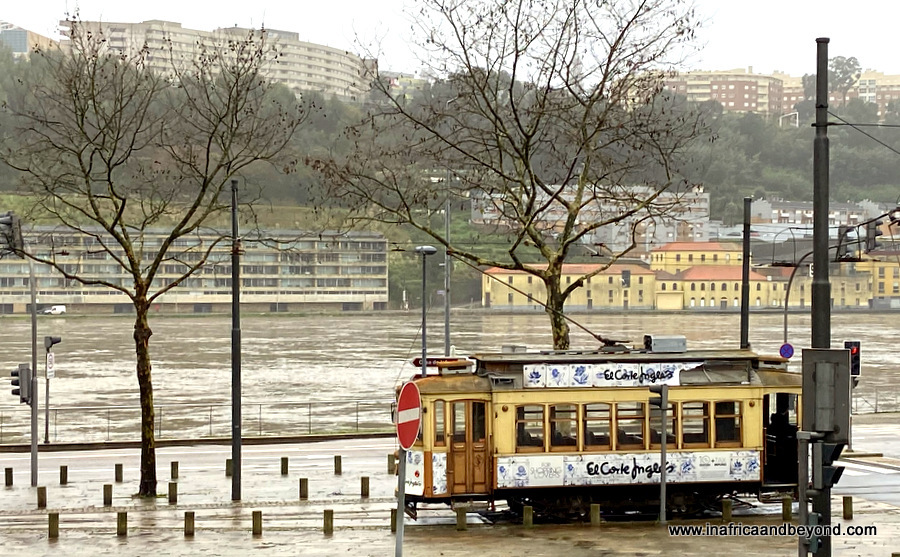 The first tramcar line in Porto was inaugurated in 1895, and tramcars then became the main form of transport there until the 1960s. This historic mode of travel still transports people through the city even though there are more modern means available. The trams take you back in time with their polished wooden interiors and brass dials and controls.

We rode on a double-ended tram and whenever we reached the end of the line, the operator would move over to his cab at the other end of the tramcar, in order to change direction. If you would like to learn more about streetcars, then visit the Museu do Carro Eléctrico (Tram Museum) in the Miragia neighbourhood.

7. Have a cuppa at Majestic Coffee Shop 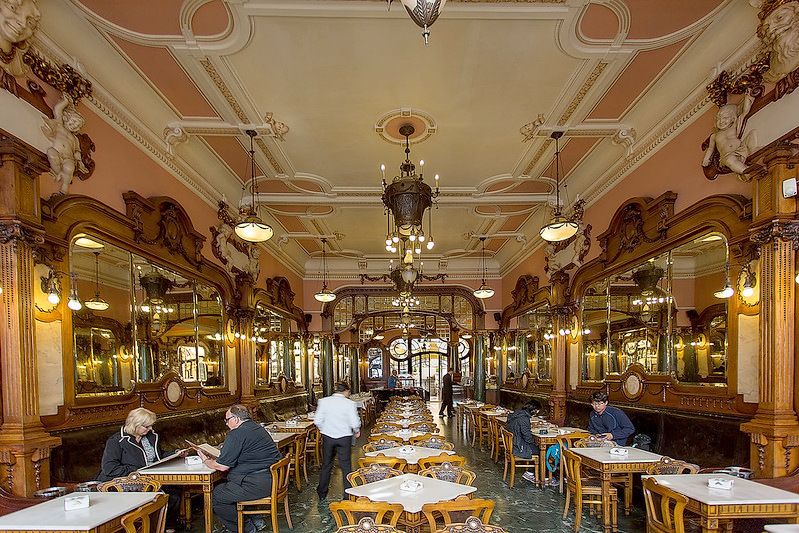 "The Majestic Café is a wonderful place, where muses, thinkers and artists can get together to live the best moments life has to offer: simply sharing communication through words and gestures, glances, smiles and even a few tears sometimes." Gloria Montenegro (President of the Paris Academy of Coffeeology)

The Majestic Cafe was named one of the most beautiful coffee shops in the world by U City guides and one of the greatest cafes on earth by the Telegraph. Previously known as the Elite Café, the coffee shop opened in 1921 as an establishment catering to intellectuals and high society. The Art Nouveau décor featuring leather upholstery, chandeliers, varnished wood, mirrors and marble make it an exquisite setting for a cuppa or a meeting with friends. 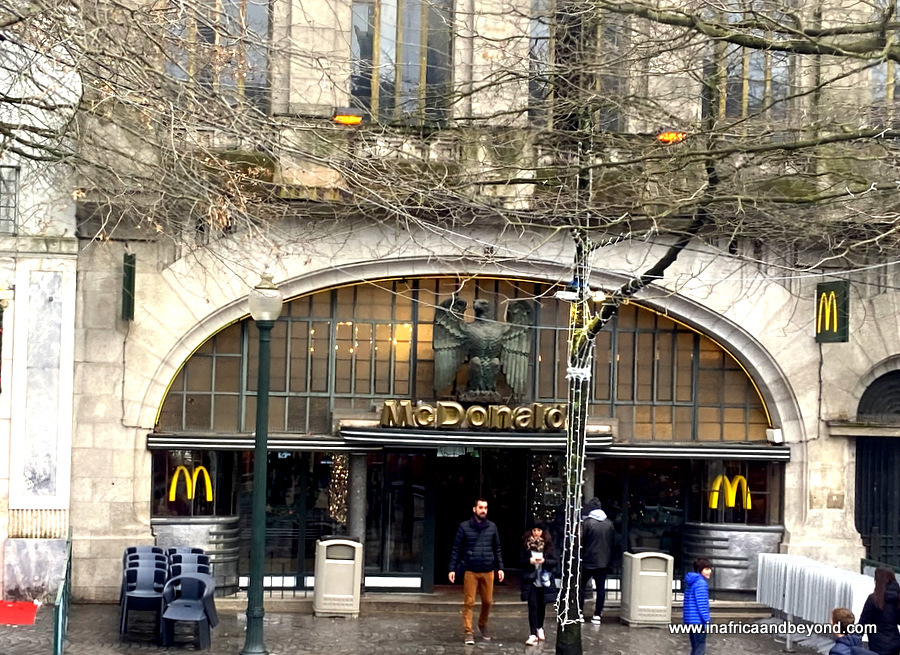 As a rule, McDonalds would never feature on my list of things to do anywhere in the world. However this one is an exception. The McDonalds in Avenida dos Aliados, Porto has been called the most beautiful McDonalds in the world, most notably by Business Insider. 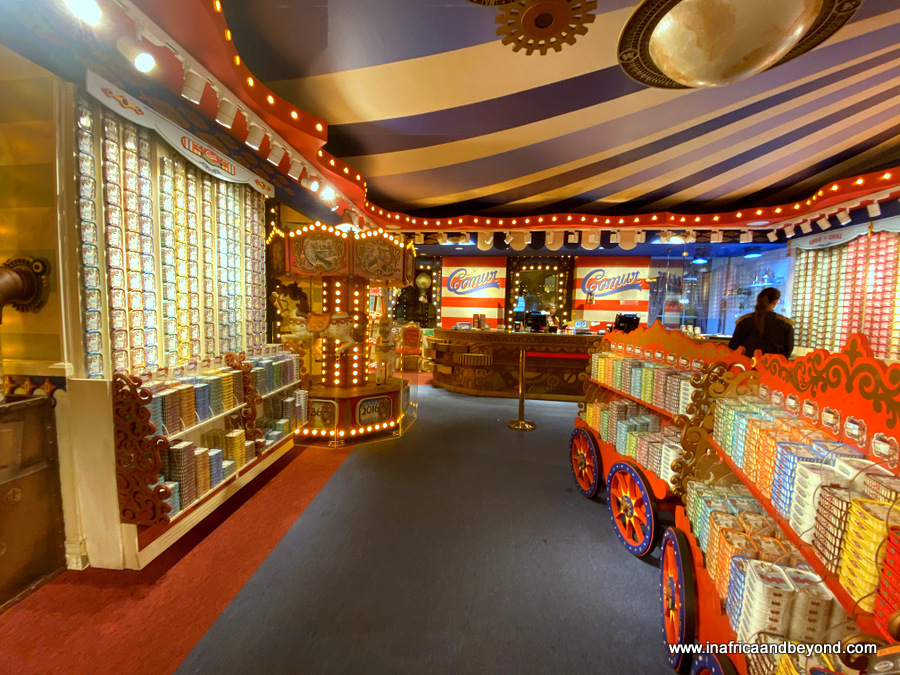 This vibrant and quirky souvenir shop pays tribute to the popular Portuguese sardine. Canned sardines in olive oil are sold here in a carnival-like environment. You can buy sardines with your year of birth on the can - although the sardines are fresher. Cans have dates ranging from 1916 to present, and display a significant event from the year and prominent personalities born in that year. Each decade has a different colour, giving the store its vibrant hues.  A ferris wheel and a carousel carrying sardines rotate constantly. The store even has its own custom-designed soundtrack! 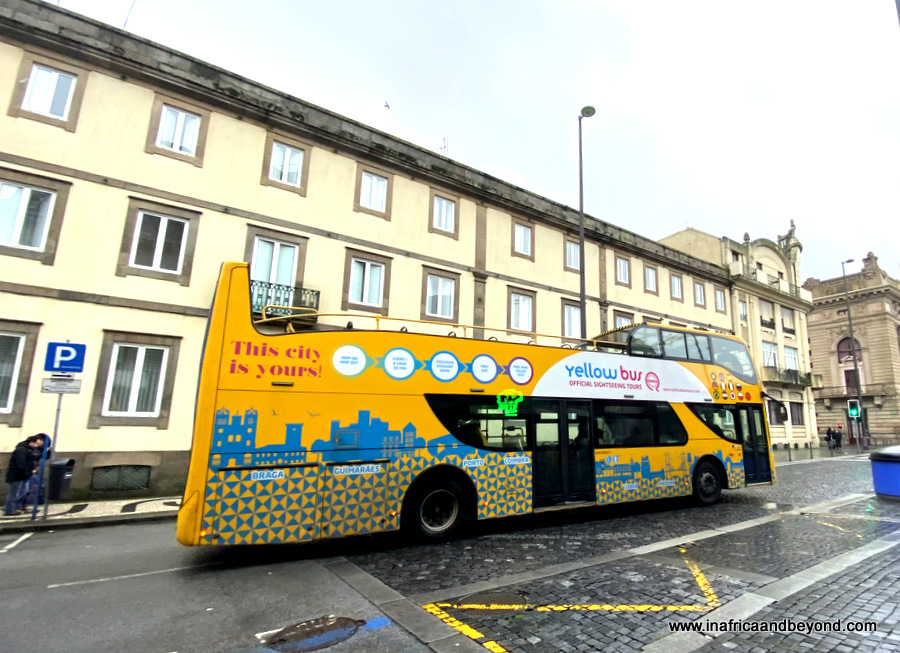 As I’ve mentioned several times, I always enjoy seeing new cities on the hop-on hop-off bus. You get a great overview of the city, with informative commentary, without having to walk too much. It’s also easier with kids. We used the Yellow Bus in Porto, which has two routes, and discovered that the city was much bigger than what we had expected. We also saw more distant parts of the city that we wouldn’t have been able to see otherwise in a short space of time, like the Gaia area across the river, and the Matosinhos seaside area.

We were really looking forward to this attraction but unfortunately we couldn’t do it due to the rain. The Arrábida Bridge was built in 1963 and was the world’s largest concrete arch bridge at the time. It is the only bridge in Europe that can be climbed . You are provided with safety equipment, and you get to climb the 262 steps to the arch with a guide. Once on top , you can enjoy the panoramic views.

How to get around Porto

If you would like to be in control of your own itinerary, then rent a car in Porto.

If you prefer not to drive, then use public transport - The Porto card with transport gives you unlimited free access to public transport in Porto, consisting of buses, metros and trains. It also includes free entry to 11 museums and discounts on most other Porto attractions. Multiple options are available. It’s great value for money.

Where to stay in Porto

The Baixa and Se areas are close to the tourist attractions, while the Ribiera area is closer to the river. Book your accommodation here or here.

Have you been there? What are your favourite things to do in Porto ? 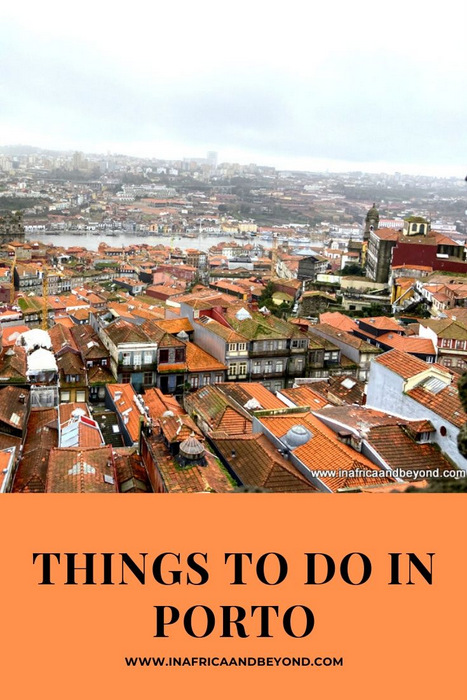 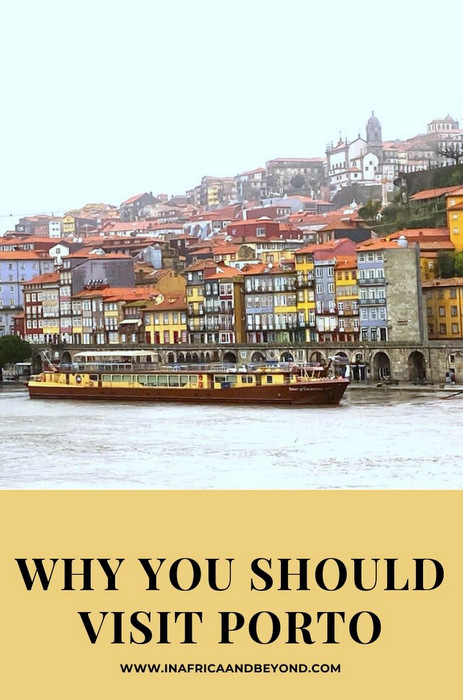