A visit to Constitution Hill

“They told you that your life was over beyond this gate.” Nolundi Ntamo. Pass offender. (1980) 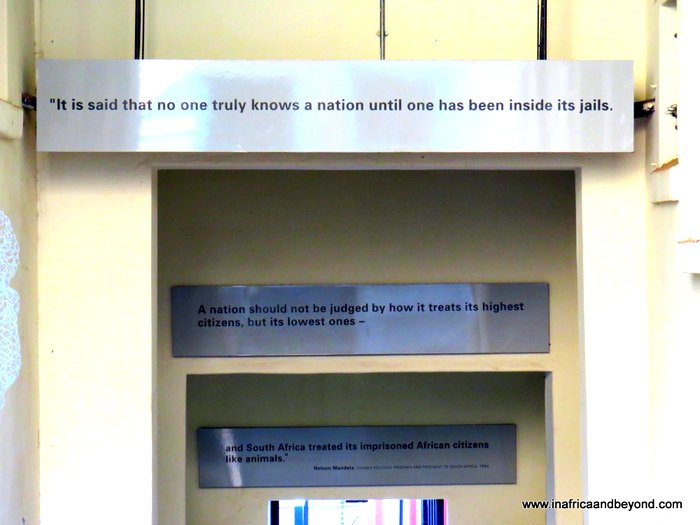 I’m embarrassed to admit this but even though it’s just a 10 minute drive away from my house, I visited Constitution Hill for the first time this month. That too, my visit was triggered by a Groupon deal which offered a guided tour for two people for R50 -  a 50% discount off the normal price. However, my visit ended up co-inciding with Women’s month – during which all women were given free entrance and a free tour so the voucher was unnecessary in the end. 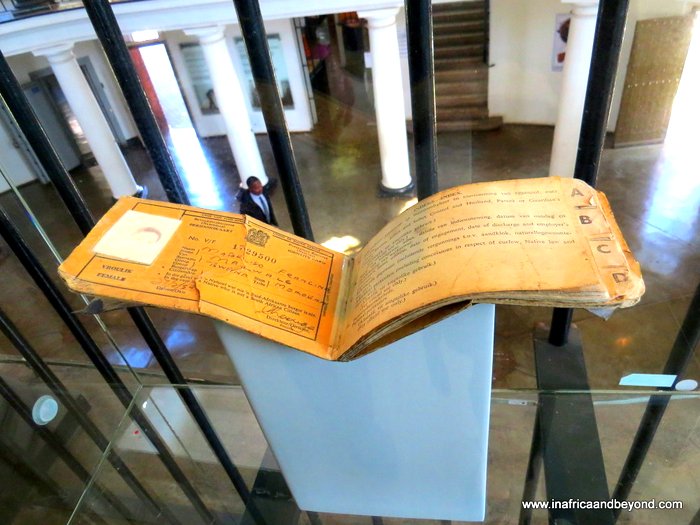 The GPS led us to one of the Constitution Hill’s parking lots. But thereafter it took us 10 minutes and lots of asking for directions before we found the correct entrance in the huge complex. It’s right next to the colourful Constitutional Court, by the way. 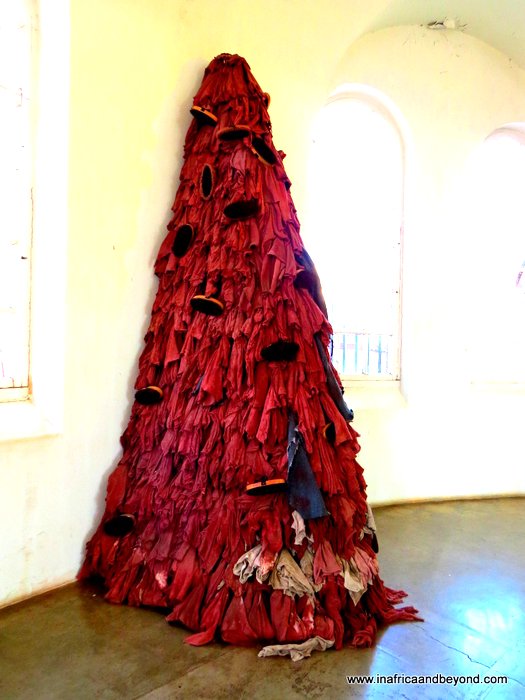 We were shown to a screening room where an orientation video introducing Constitution Hill and its history was on replay. The Old Fort was built by Paul Kruger in 1892/3. Subsequently it was used as a notorious prison where many of the inmates were arrested for offences like contravening pass laws and the Group Areas Act although there were also common criminals amongst them. Some of the notable prisoners that were held there include Nelson Mandela, Mahatma Gandhi, Albertina Sisulu and Fatima Meer. White inmates were kept in the Old Fort, and black inmates in Section Four and Five. The women’s (gaol) jail was added in 1909.

The Old Fort became a National Monument in 1964 and the new Constitutional Court was built at this site much later.

Our guide David introduced himself and began the tour. The complex was a hive of activity as there were Women’s Month functions and school excursions underway.

The eternal flame of democracy burns in the courtyard. It was lit in 2011 by Nelson Mandela at his Eastern Cape home, and the flame passed through the hands of all the judges before it touched the bowl. 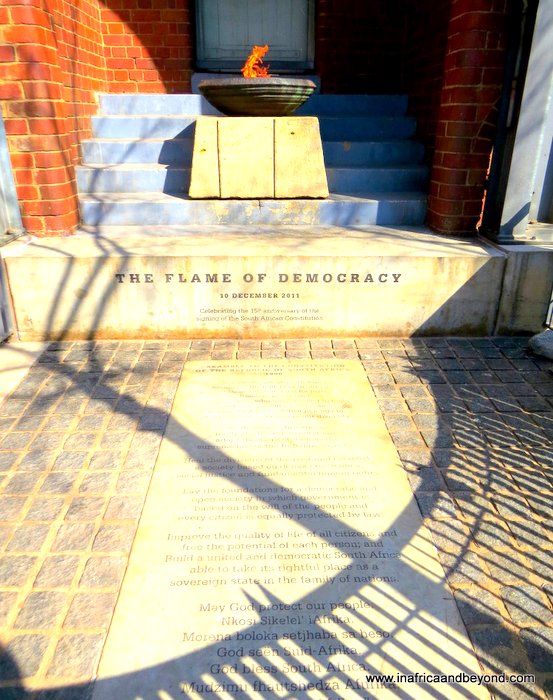 We were first taken to the non-White Women’s Gaol.  Here we heard chilling stories about the humiliating and degrading conditions these women were kept under and the ruthless manner in which they were treated. They were routinely stripped of their clothes …and their dignity. Enlarged paintings about their conditions that were drawn and illegally smuggled out by Fatima Meer during her imprisonment were on display. There are also videos by former prisoners about their experiences as well as personal items belonging to them. The price of our freedom was high indeed and my admiration for these struggle heroines grew even more. I don’t think that I have a fraction of the strength they had. 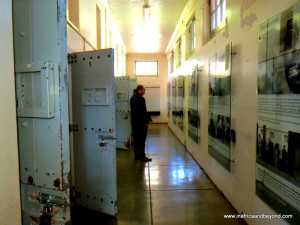 White women were kept in separate quarters under much better conditions and we saw those too.

There was a notorious clinic on the premises where the apartheid doctors would often abort babies from pregnant women then tell them that they were never pregnant. Hundreds of other children were born here and spent the first few years of their lives here.

We were then led to the non-white men’s prisons where exhibits displayed the cramped sleeping conditions of the prisoners, the inhumane manner in which food was allocated to prisoners based on their race and the torture instruments used on prisoners.

Other exhibits showed the blanket sculptures prisoners made on inspection days –often to keep themselves sane - and a collection of Gandhi memorabilia.

We saw the tiny isolation cells where prisoners were kept for several days at a time and given only rice water. Many lost their sanity. I had goose bumps from listening to these appalling stories of dehumanisation. 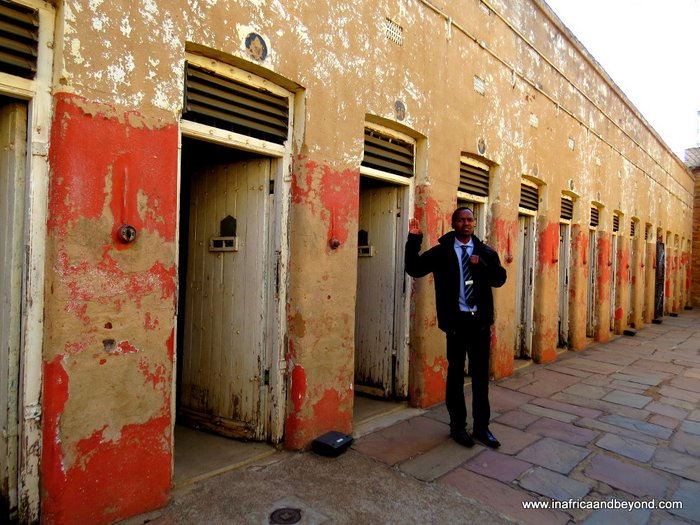 Our tour ended with a visit to the Constitutional Court, the highest court in the land. The exterior is adorned with the words “Constitutional Court” in bright colours and in all 11 official languages. The beautifully carved doors to the court building are nine metres high and feature the 27 fundamental themes of the Bill of Rights in all official languages, plus sign language. 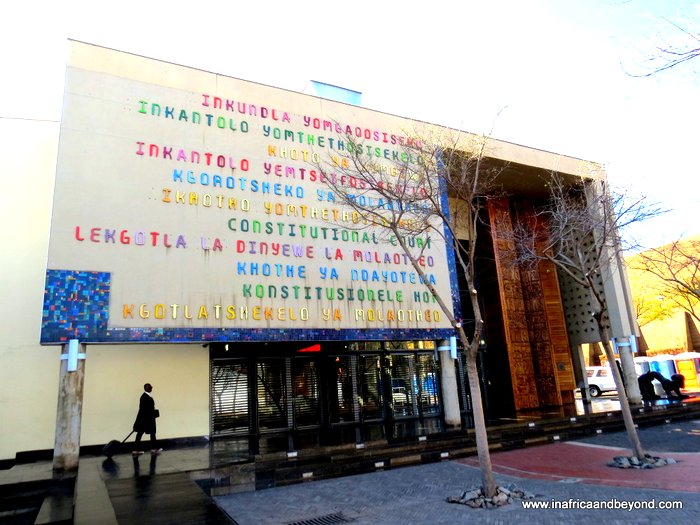 The tour took around two hours. It was a deeply moving visit and my only regret is not having gone there earlier.

2 comments on “A visit to Constitution Hill”