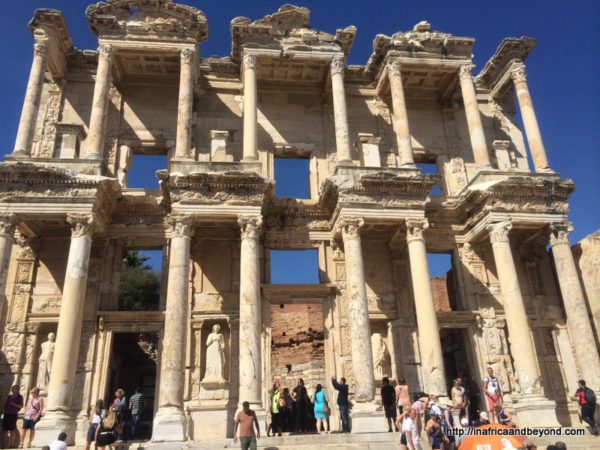 In its heyday, Rome was a superpower. The Roman Empire stood for over a thousand years and at its peak, it ruled from the borders of Scotland to the deserts of Egypt and in between. I am often surprised when tours in non-European countries, like Morocco and Lebanon, include a visit to the Roman ruins in their area. It seems like the Romans were everywhere, including Kusadasi. 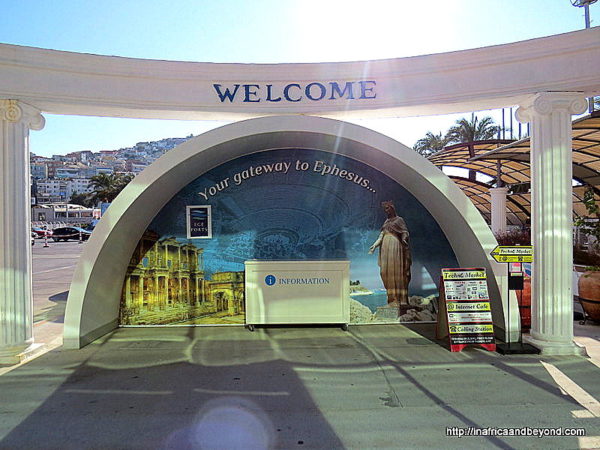 Kusadasi in Turkey was one of the ports we stopped at on our Mediterranean cruise. This was my second visit to Turkey, the first being a few wonderful days spent in Istanbul a few years ago. Kusadasi is a popular cruise port and resort town on Turkey's Aegean coast and is most famous for being the closest port to Ephesus, one of the best preserved ancient cities in the world. 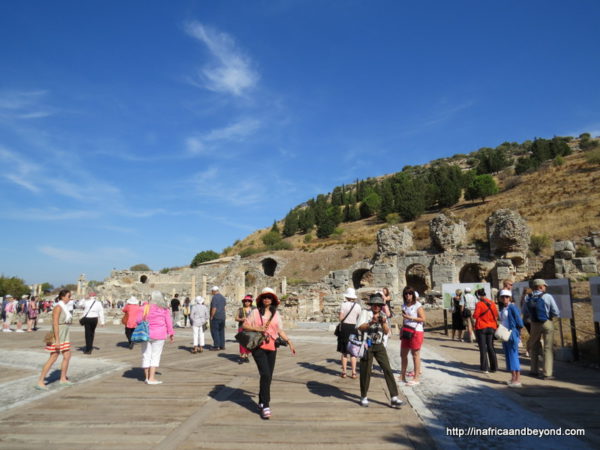 Tourists swarm around in the searing heat

Originally a Greek city built in the 10th century BC, it flourished after it came under the control of the RomanEmpire in 129 BC.  At its prime, Ephesus was the second largest Roman city in the world after Rome. Even Antony and Cleopatra spent some time there in 31-32 BC. It was famous for the Temple of Artemis which was one of the Seven Wonders of the Ancient World.

Now, I’ve been following an unofficial Seven Wonders quest over the past few years – although it’s been the New 7 Wonders, as none of the old ones besides the Pyramids of Egypt exist anymore.  So when I heard about Ephesus being the site of one of the ancient wonders, I decided that this was my opportunity to pay it a visit. 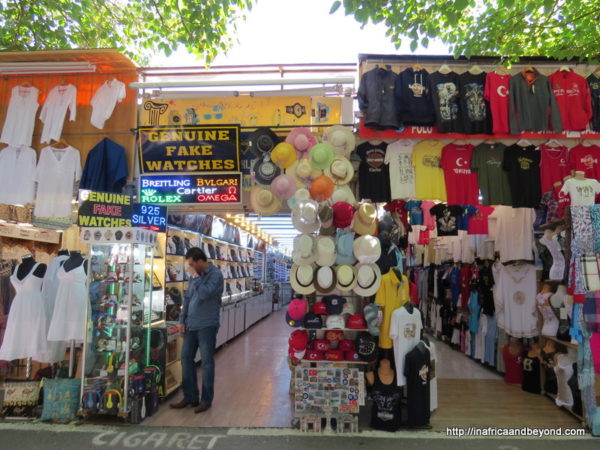 We disembarked at Kusadasi and were treated to a folk dance by local dancers, then were driven by bus from the modern-European looking town of Kusadasi to the ancient city of Ephesus. The area around Ephesus was surrounded by stalls – selling souvenirs, refreshments and “Genuine Fake watches” – a local specialty. 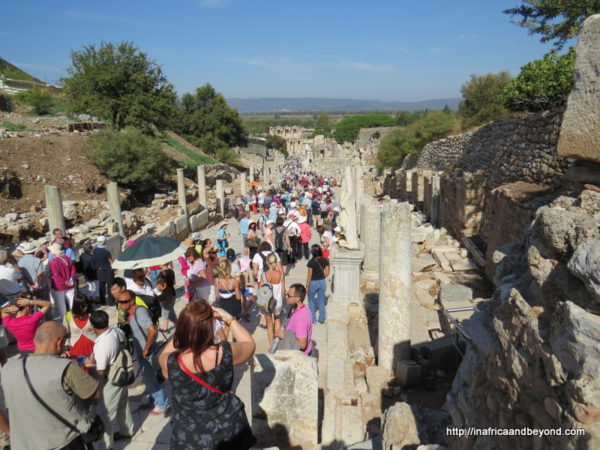 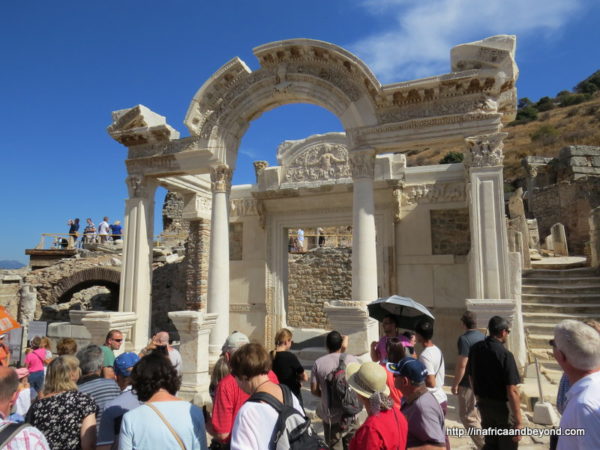 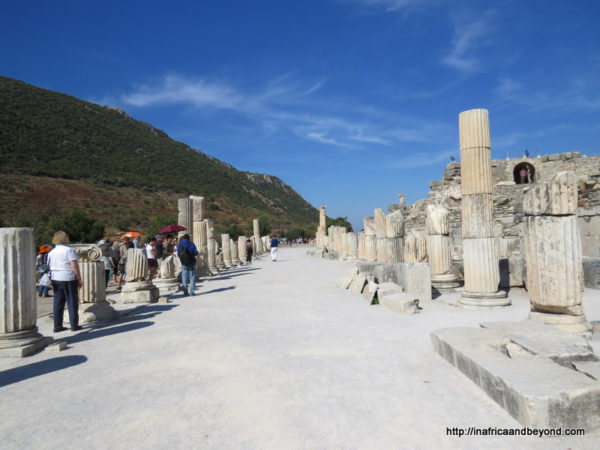 As we entered the entrance gates, the crowds were soaring, the heat was searing and the cats were everywhere. We walked along the long and cobbled main street from one end of the city to the other. It was surrounded on both sides by ancient temples, houses and public buildings. We were awestruck by the first sight of the magnificent Celsius library which is one of the most photographed places in the world. It was once the largest library in the world too, holding more than 12 000 scrolls.

Then we got to the amphitheatre which seated up to 25 000 spectators a platform for arts and public speaking until the Romans arrived, when it became the stage for gladiators who fought to death. More recently, in the 1990’s concerts by famous artists including Pavarotti were held here. 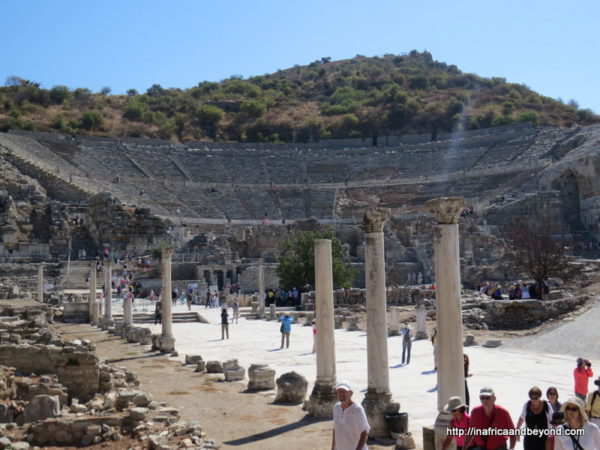 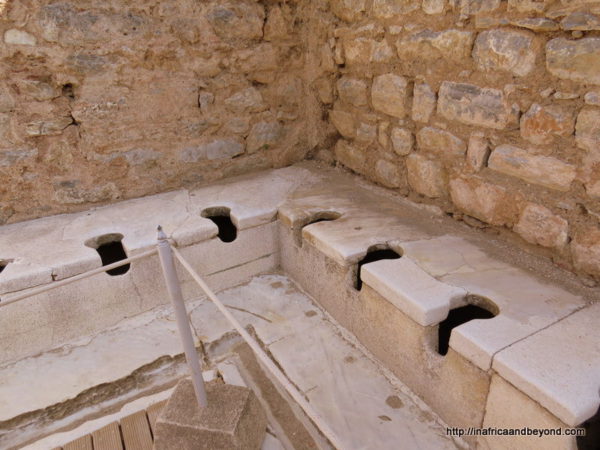 On leaving Ephesus, we stopped at the touristy Cittantica Ephesus Park shopping centre- where a Roman show with gladiators and emperors was re-enacted every few minutes. It was highly entertaining to watch the gladiators mock-fight and wait for the emperor to give the order to kill or spare the loser.

Back in Kusadasi, after sitting through the obligatory carpet presentation, we found the lovely Erzincan restaurant where we enjoyed some traditional lahmacun and iskander kebab. We couldn’t resist buying Turkish ice cream and baklava from a street vendor either. We left Turkey with full bellies and happy memories as we headed for Santorini. 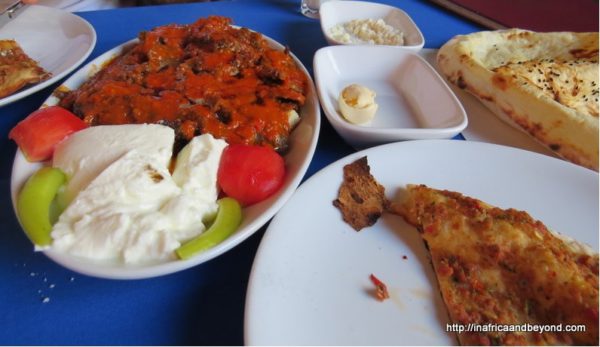 My top tips - Do a guided tour to get the most out of the visit. Wear comfortable shoes and take bottled water, sunscreen and a cap! 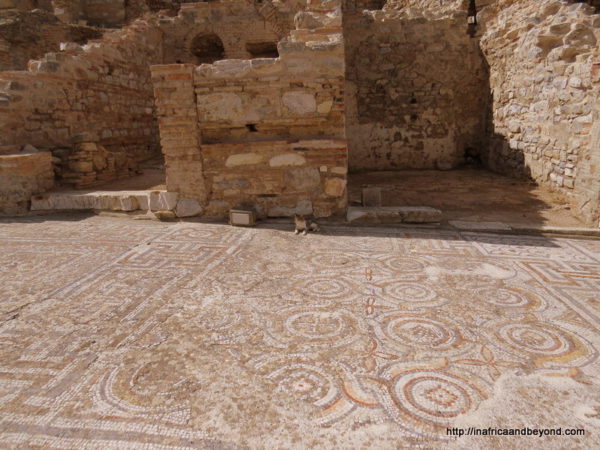 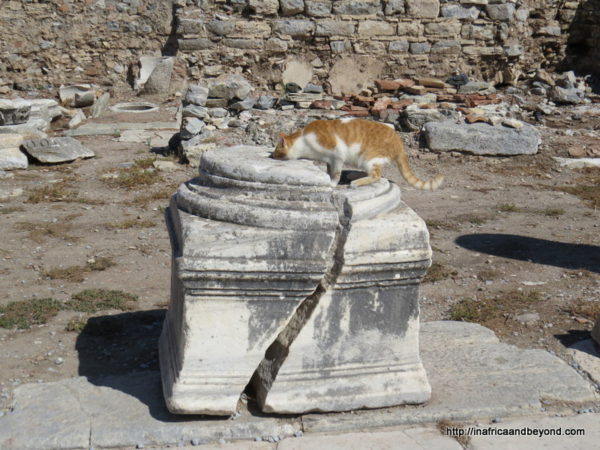 A thirsty cat drinks from the ruins 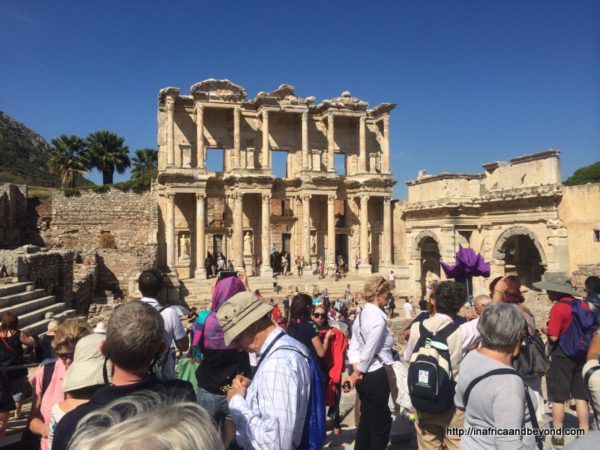