Fall in love with Venice 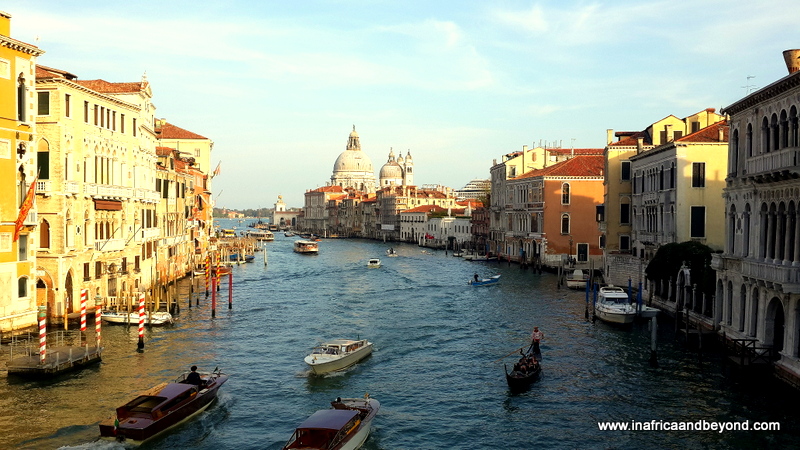 Fall in love with Venice

Although our visit to Venice coincided with a much-hyped celebrity wedding there, we didn't get to see it… or the happy couple. However, Venice didn't need Hollywood stars or anyone else to lend it any stardust - it had enough magic of its own. In accordance with the title La Serenissima (the most serene), one of its many lovingly-bestowed appellations, Venice is renowned for being one of the most romantic cities in the world.

The beauty of its setting, its unique architectural style, and the car-free cobblestone alleys with history emanating from every stone, all contribute to its charm. Children laugh and play in the large campos (public squares) and cavalier gondoliers row through the narrow canals in their ornate black and gold gondolas, as their guests take endless selfies. Every scene seems to have arisen from an artist’s brush and every corner presents a photo opportunity.  It is easy to see why millions are drawn in every year by the allure of the city. But Venice wasn’t always so serene. 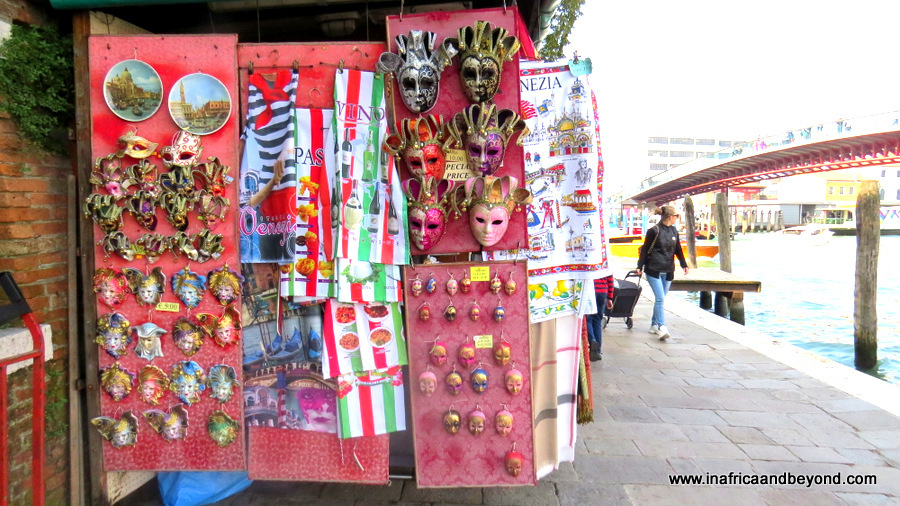 Three hundred years ago, Venice was a playground for the affluent from around the world. It was notorious for its flamboyant nature, feverish hedonism and excessive debauchery with Venetian nobles and visitors seeking pleasure in gambling, endless parties and carnivals. For a while, many of Venice’s residents wore their masks at all times in public to keep their identities and escapades hidden. It was during this time that Casanova and his exploits became famous. This was also the beginning of the decline of the Venetian empire with its long and colourful history starting in 421AD during which it was attacked by invaders, and devastated by plagues and fires but during which it also captured the imagination of the world. In 1866, Venice became part of the Kingdom of Italy…and it continued to capture the world’s imagination.

One of the city’s other appellations is “The Floating City”. Over a hundred islands are scattered in the Venetian lagoon, separated by canals and linked by approximately 400 bridges. Its construction is a marvel of man and nature. To create a solid foundation for the buildings, they were constructed on wooden platforms supported by wooden stakes driven into the ground. Oddly enough, the wood doesn’t decay because it is submerged underwater. The salt in the water petrifies the wood over time, converting it to a hard stone-like substance and strengthening the structure. 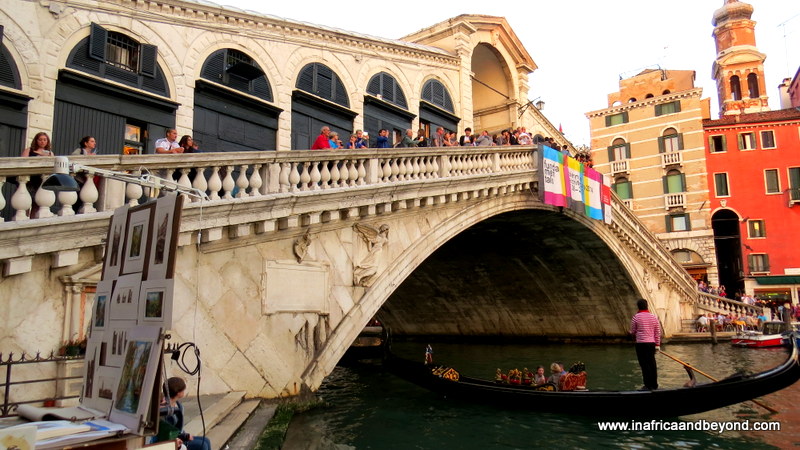 However the very same lagoon which protected Venice from invaders since its inception is now threatening its survival. The sea levels which rose very slowly over the past few centuries are rising at a much more rapid rate due to global warming, causing an alarming increase in the extreme high tides (acqua alta) which flood the city. This is evidenced in the abandoned ground floors of the many palazzos and other buildings throughout the city. There are other factors too but this is regarded as the most serious threat and “The Floating City” is sadly becoming “The (rapidly) Sinking City”. 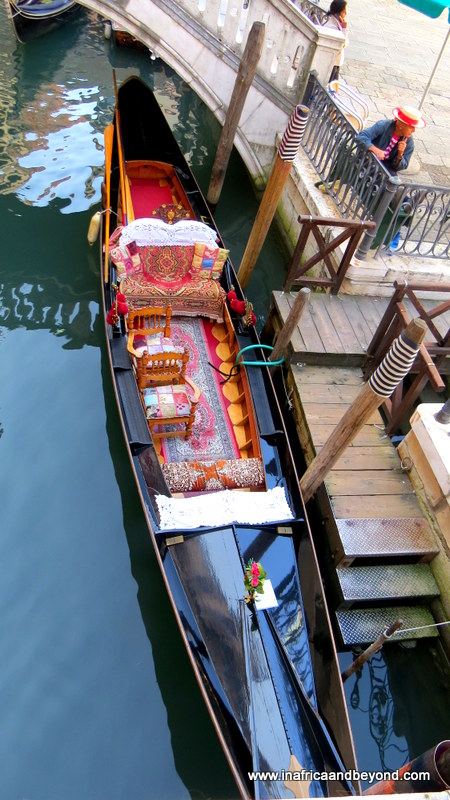 Gondolas used to be the primary mode of transport in Venice. Now, the hefty price at 80 Euros for a 40-minute day-time trip and 100 Euros for an evening trip ensures that they are used mainly for recreational purposes. In fact, there are only a limited number of gondolas in operation (around 430) and licences are controlled by a gondolier’s guild which is over 1000 years old. A would-be gondolier has to undergo 400 hours of apprenticeship and a rigorous exam before he can become part of the guild. When he dies, the coveted licence is traditionally passed on to the next generation and thus it is kept within the family. Contrary to popular belief, all gondoliers do not serenade their guests. And the vaporetto (water bus) is now the main mode of transport apart from walking. 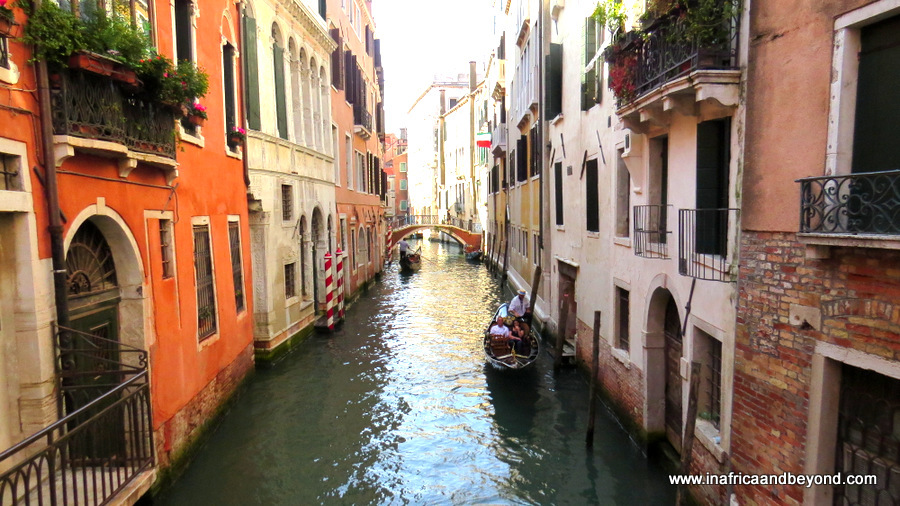 Venice is small. It has a population of under 60000 which is constantly decreasing but it is descended upon by around 22 million tourists every year – making it very crowded. This is not helped by its popularity as a cruise port destination. But wander off the main tourist routes or to the outlying islands and you will find quiet spots where you can escape from the madding crowds and revel in its beauty.  In fact, much of Venice’s appeal is in getting lost and discovering its hidden treasures.

For a small city, there is much to keep one occupied here. Spend the day in St Mark’s Square, visit the Campanile (bell tower), the clock tower and the Basilica, or just sit at a café al fresco and watch the people and the pigeons.  Explore the nearby Doges Palace which showcases the ornate elegant lives of the doges (dukes) who ruled Venice for centuries. The many paintings and frescoes on the wall show Venice in its heyday.  See the legendary Bridge of Sighs which connects the palace to the prisons. This is where prisoners sighed as they took one final look at Venice before being incarcerated. 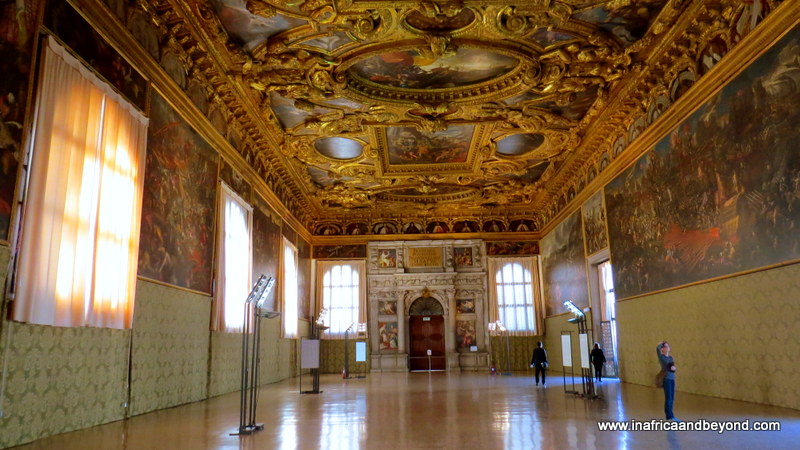 “What news on the Rialto?” Shakespeare’s fans will recognise this question asked by Shylock from The Merchant of Venice referring to the most famous bridge in Venice, the crowning glory of the Grand Canal. The Rialto Bridge today is still a busy retail area filled with shops, restaurants and tourists. It also offers superb views of the magnificent palazzos lining the Grand Canal. One could easily spend hours here, taking in the sights and sounds of Venice.

In a little calle (street), we discovered Libreria Acqua Alta, a charming little bookshop which shares its name with the flooding phenomenon that invades Venice. The welcome sign proclaims it to be “The Most Beautiful Bookshop in the World”.  It may not be the most beautiful but it certainly is one of the world’s most unique and eclectic bookshops. The fire exit at the back of the shop opens directly onto the canal. Here new and old books, in the world’s most popular languages, fill gondolas, canoes and bathtubs. The idea behind it is that when the canal rises and inches of water flood the bookshop, the books remain safe in their special storage units. You can even climb a staircase made of out of outdated encyclopaedias and get a private view of the canals while the owner’s pampered felines watch you indolently. 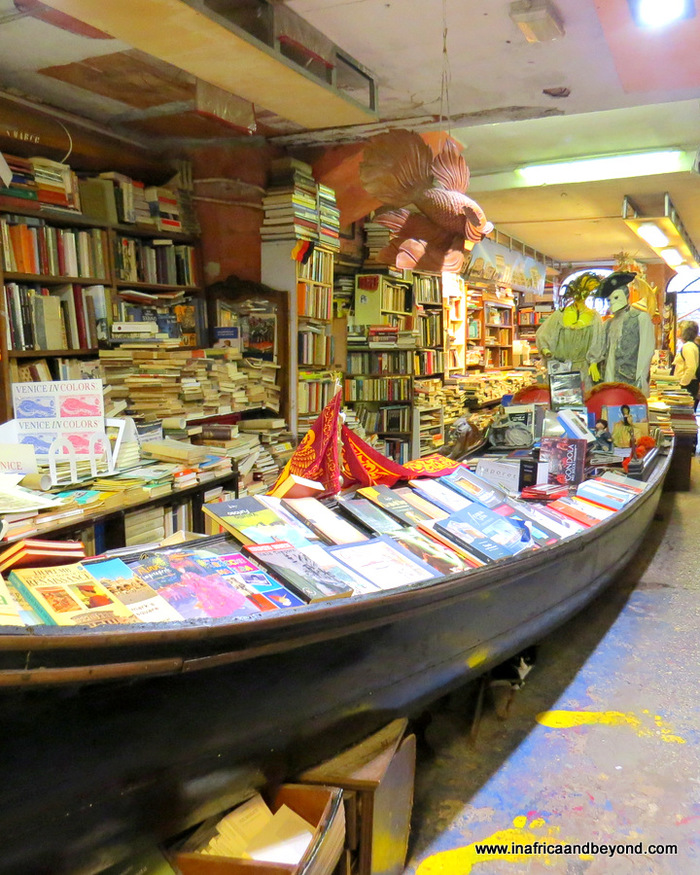 Take the vaporetto to explore the surrounding islands, especially Murano and Burano. Murano is world-famous for its beautiful glass and you can sit through a glass-blowing and sculpting demonstration and marvel at the artisan’s skills. Burano is famous for its lace but it is equally well-known for its brightly painted houses which give it the honour of being called the happiest little island in Venice. Here the ubiquitous canals run through the buildings as in the main island of Venice but whereas the most prevalent colours in the latter are stone and rust, here they are bright and cheerful, providing a more vibrant setting for the canals.  Swans glide across the shimmery waters providing post-card like photo opportunities and you feel as though you’ve walked into a make-believe world. Purists may find the bright colours tacky but I thought that it was one of the prettiest places I’ve ever seen. 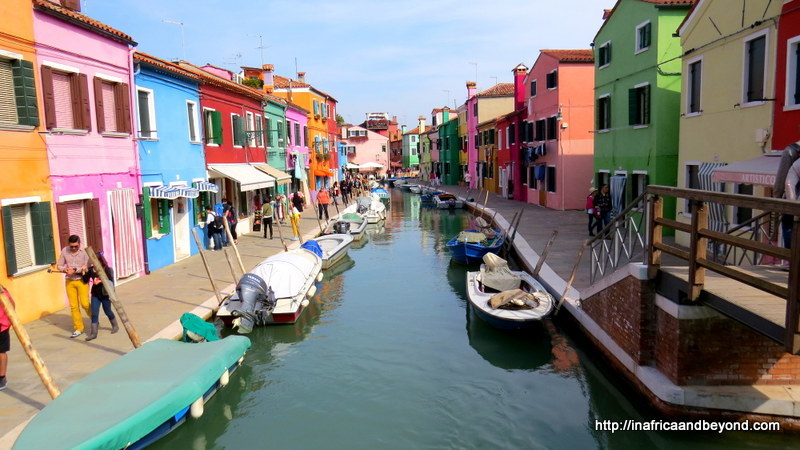 At night, Venice reveals its dark side. Once you veer off the busy main street, the alleys are lantern-lit and eerie. There are shadows everywhere. Shrouded gondolas are silhouetted against dark canals under the gaze of the moon.  Haunting melodies from musicians playing outside restaurants penetrate the night air. You start thinking about the murder mystery and ghost tours you saw advertised earlier and realise that this would be the perfect setting for a surreal crime. And you wonder how many of these Venice has witnessed. Then you spot a gelateria with gelato in all the colours of the rainbow. All morbid thoughts are forgotten and Venice once again becomes La Serenissima.

This article was first published in Travel Ideas Magazine.

See my favourite things to do in Venice.

Read about our thoughts on Rome.

Read about our experiences in Florence.

Find the cheapest flights to Italy. 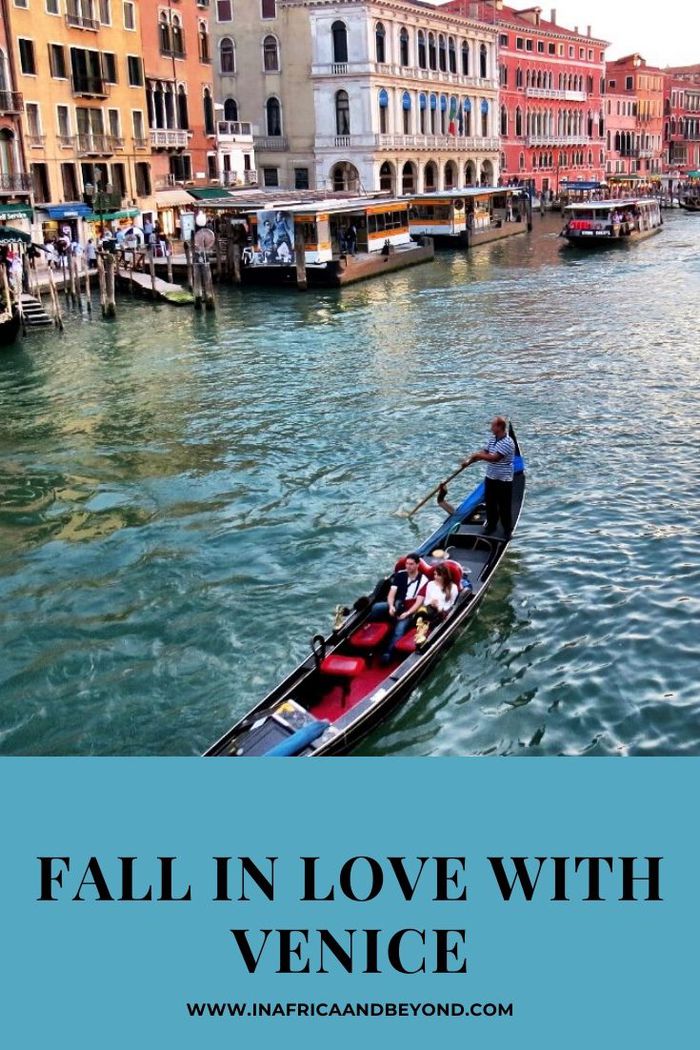 15 comments on “Fall in love with Venice”