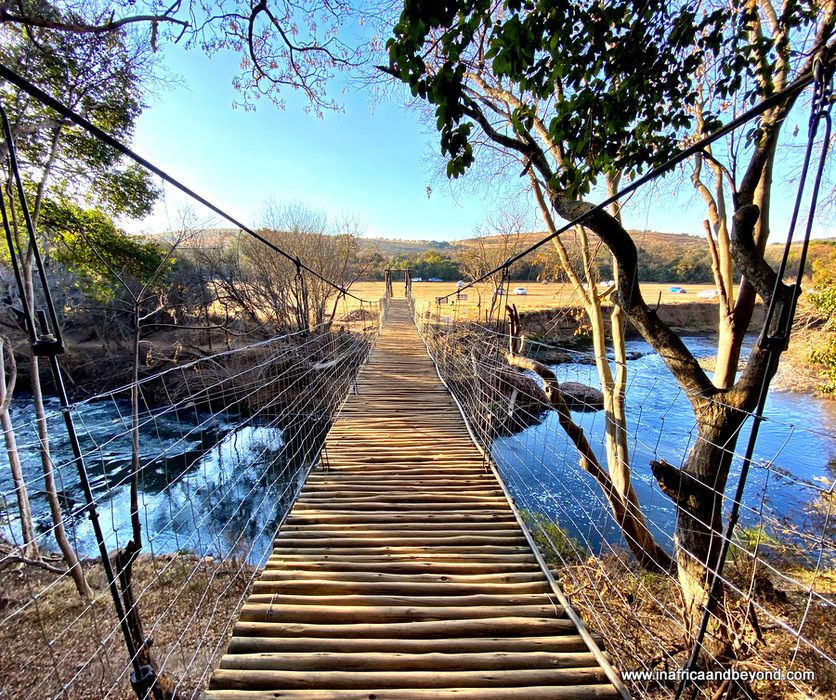 Travelling is what I missed the most during the extended lockdown period. Yes, I know that it is a first-world problem, but I can’t help it - I’m a dromomaniac. Dromomania is a term used to describe a desire for frequent traveling or wanderlust. So until travel resumed, I had to find other outlets to satiate my need to explore.

Fortunately, our nature reserves opened up so we started hiking. I spoke to friends who hike and looked at expert lists of places to hike in Gauteng, our province. Many of them are in the Pretoria region and Hennops Hiking Trail came highly recommended. 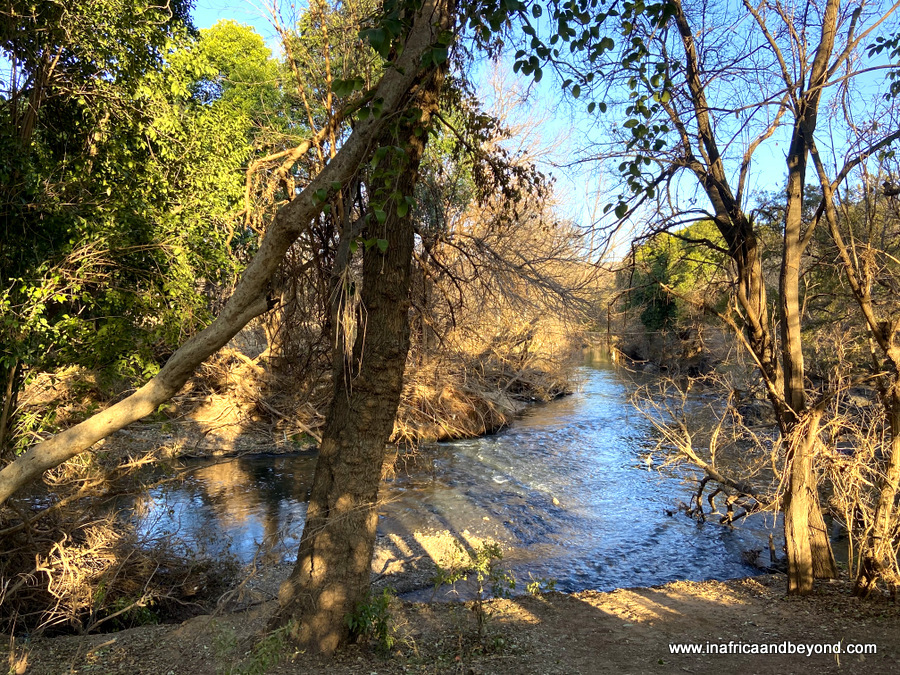 Around 50 minutes from Johannesburg, near Centurion, this is an expansive nature reserve with hiking, mountain biking and off-roading trails, as well as a historical background. The Hennops river flows through a valley, flanked by mountain ranges on the northern and southern sides. There are four hiking trails, ranging from 1.5 km to 10 km. They start by crossing a meandering river using either a suspension bridge or a cable car – which is more like a manually-operated pulley swing – then veer off into the surrounding hills. A third option – a stepping stone bridge has recently been added too. 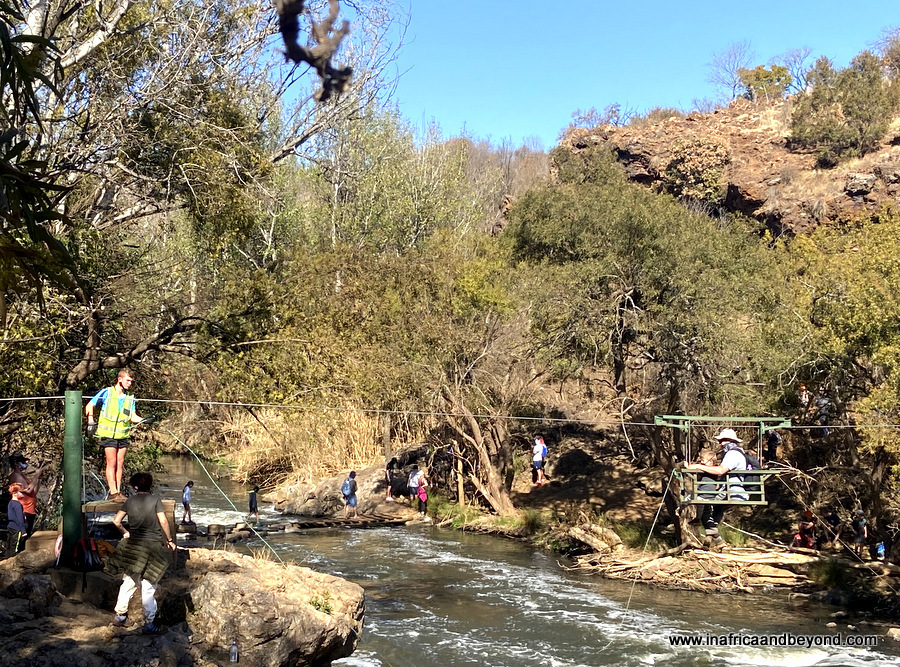 Once we’d paid our entrance fees at the Hadeda Camp, we were given a map. We went on a combination of the Zebra Trail (5 km) and the River Trail (1.5 km). We crossed the river via the swinging suspension bridge and walked alongside the gushing river for a while. Then our route took us upwards into the hills. The route was well-marked with colour-coded painted feet to guide us along the way. 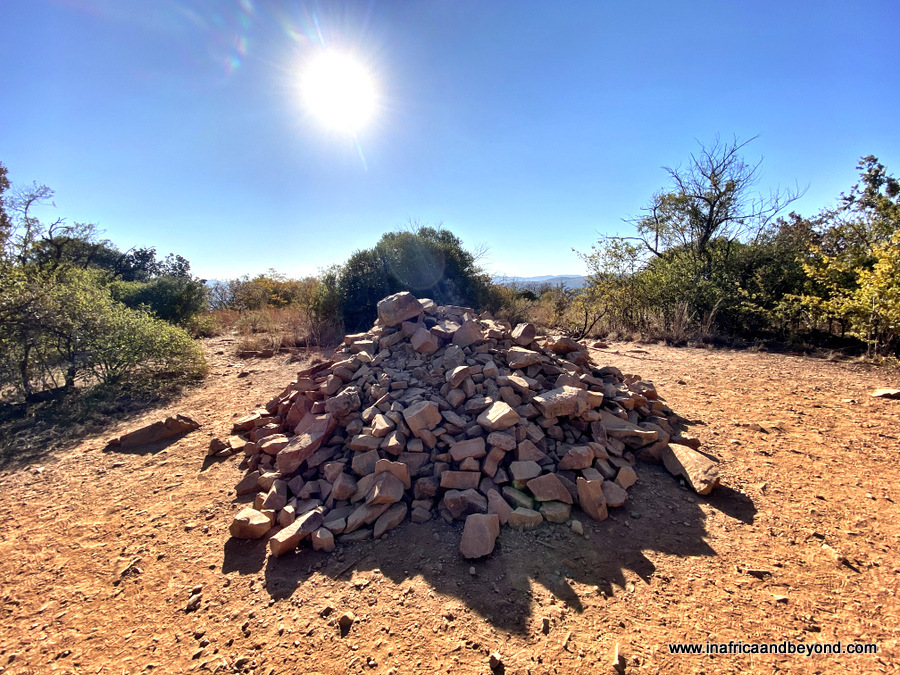 We walked through tall, green forests and over rocky plateaus as we climbed towards a lookout point from where we could see the Hartbeespoort Dam, the Magaliesberg Mountains and the huge empty towers of the now obsolete Pelindaba nuclear power station. We saw the Oude Muragie ruins along the way, then proceeded downhill back towards the base. 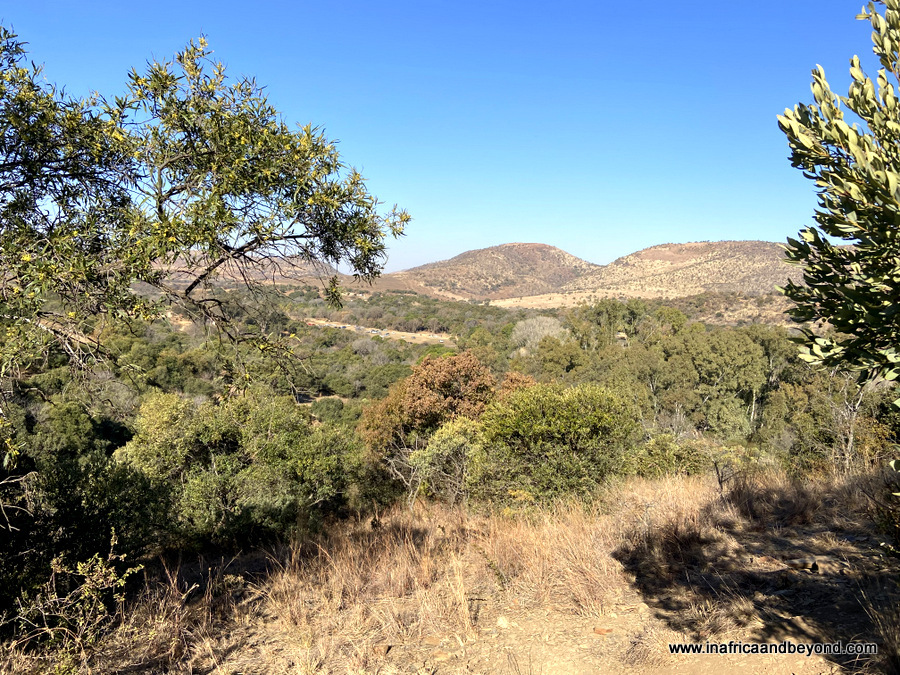 View from the trail

Although the parking lot was quite full, and we saw a lot of people at the entrance, there weren’t many people on our trail. The website lists the trail as easy to average but our legs definitely had a great workout. 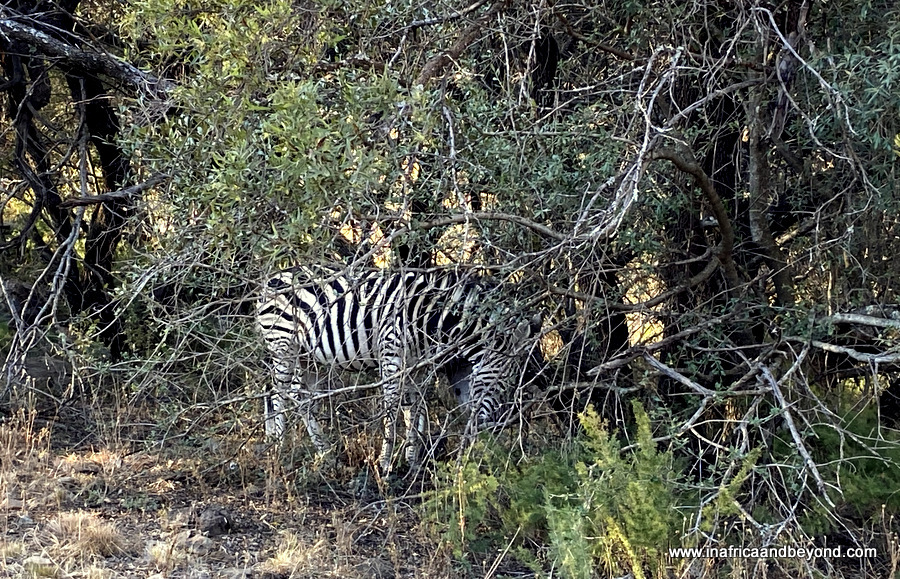 The reserve is home to wildlife including zebras, impalas, wildebeest, impalas and kudus. We saw some zebras, monkeys and zonkeys (zebra/donkey hybrids). The zonkeys had zebra legs and dark donkey-like torsos. It was great to see some wildlife after so long. 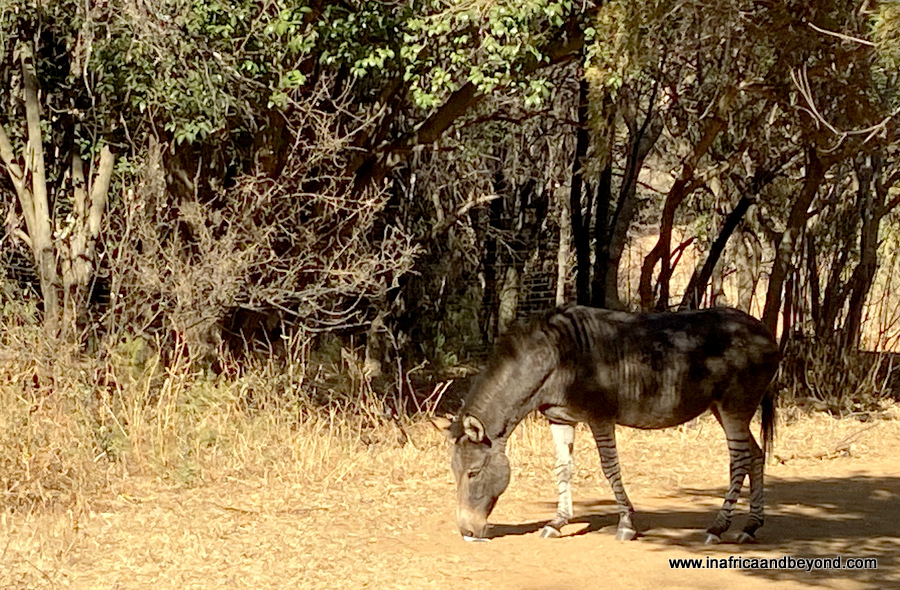 Please note that some of them can only be seen on specific trails.

According to legend, Pruimpie was an orphan who was left behind when Mzilikazi fled while escaping Shaka Zulu’s impis, around 1837. Later on, he was fond of asking his neighbours for chewing tobacco (called pruimpie -hence the name). Pruimpie lived in this cave.

Traces of a settlement including a stone-packed kraal where cattle were kept can be seen here. It is believed to be from the Mzilikazi era.

This cave was used as a field hospital during the Anglo Boer war. 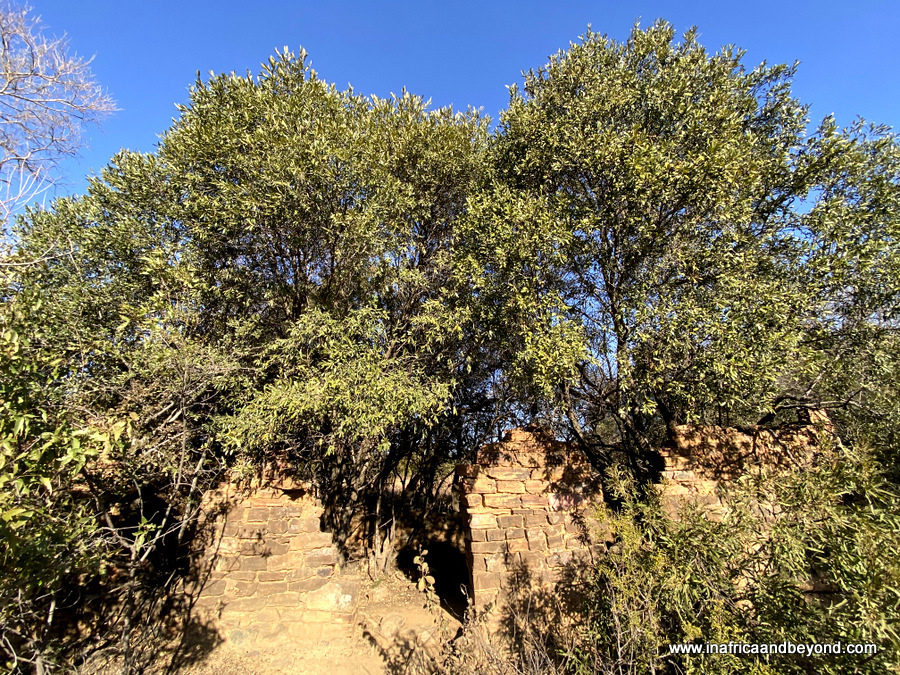 Ruins of old stone houses which were built and lived in by mine workers around the 1930's.

This “oven” on the Krokodilberg trail was used to produce quicklime until the early 1900's. Timber and limestone were packed in the chimney and burnt, the remains were crushed and cleaned then used as cement. The old dolomite mine workings can also be seen here.

“Climb the mountains and get their good tidings. Nature's peace will flow into you as sunshine flows into trees. The winds will blow their own freshness into you, and the storms their energy, while cares will drop away from you like the leaves of Autumn.” John Muir, Mountaineer. 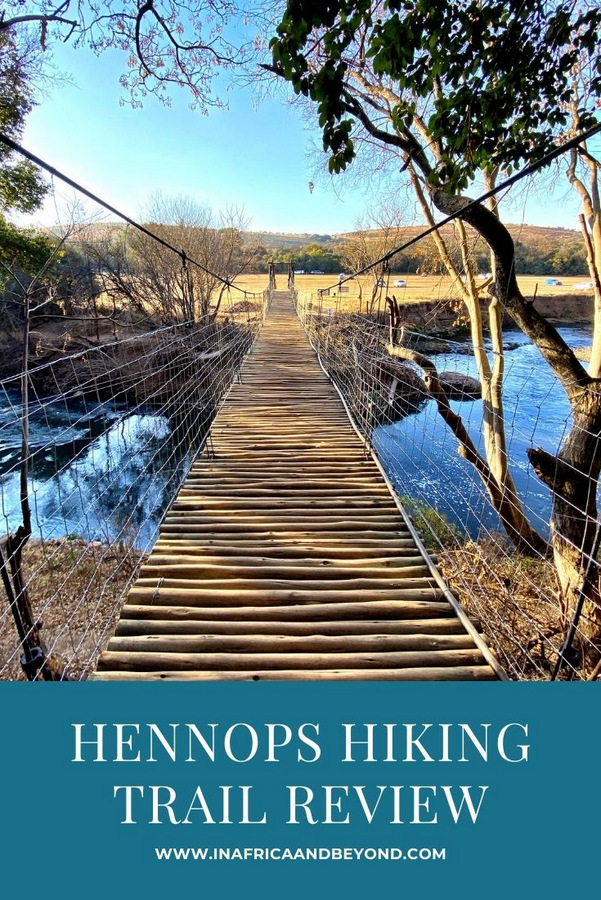