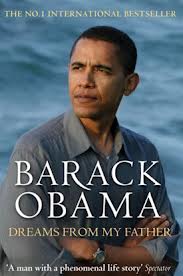 Last week, I was in Kenya. I had bought Barack Obama’s book Dreams from My Father: A Story of Race and Inheritance

almost a year ago in Mumbai. Since I’m too busy to read much else besides my six magazine subscriptions when at home, I’d been reading the book on and off everytime I went on holiday. As luck would have it, I got to the Kenya chapter while on the plane to Kenya and found it all the more interesting because I was experiencing the country at the same time.

(2006 Nobel Peace Prize winner)– Yes, he’s a business book buff. So while in Nairobi, we ask the locals what was interesting to do in the city. Having just come from the Masai Mara and brilliant game-viewing, we decided not to visit any animal sanctuaries. We opted to visit the museum then walk through the city to the Kenyatta International Conference Centre (KICC) which we were told offered a great panoramic view of Nairobi. We finally got there and realised there was some sort of expo happening there and everyone was on lunch break. After asking some questions, we found out that it was the 2010 Africa/Middle East Regional Microcredit Summit which we had no idea was happening and Muhammad Yunus was one of the opening speakers. A security guard there told us that we should “go in and help ourselves to food as it was free food – the government was paying for it”. We opted not to do that especially when we discovered that everyone else had paid US$300 for the privilege although the security was lax enough to allow us to do it.

We entered the KICC and were told that we couldn’t go to the top for the next half hour because the Kenyan President Mwai Kibaki was having lunch in the building. We would have to wait for him to leave first before we were allowed to go up. We got ourselves some good seats and waited. A short few minutes later, a guard told everyone to stand back because the President was coming up. The brightly-dressed band got into position and the President came out with his entourage followed by Mohammed Yunus and his entourage. We watched as the band played with all the pomp and ceremony it could muster and the President then left with his motorcade. It was a case of being at the right place at the right time.