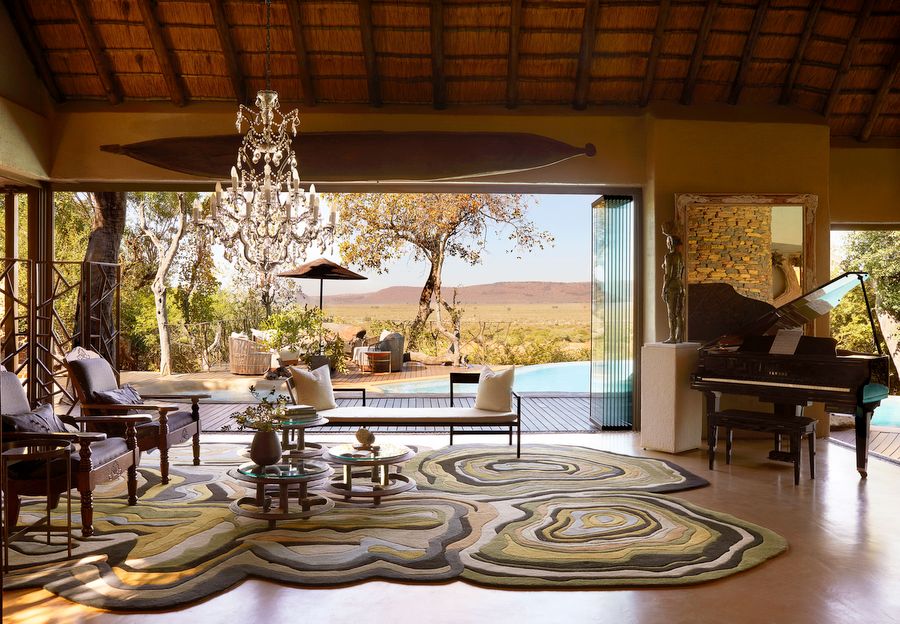 The word “molori’ means "to dream" in the seTswana language, and Molori Safari truly is a dream in the African wilderness. Situated in the malaria-free Madikwe Game Reserve, it was originally built as a private family retreat. After a complete makeover, it was opened to the public in 2007, now boasting a reputation as one of the most exclusive and glamorous lodges in South Africa, counting international celebrities, royalty and world leaders, including the late President Nelson Mandela, among its guests. 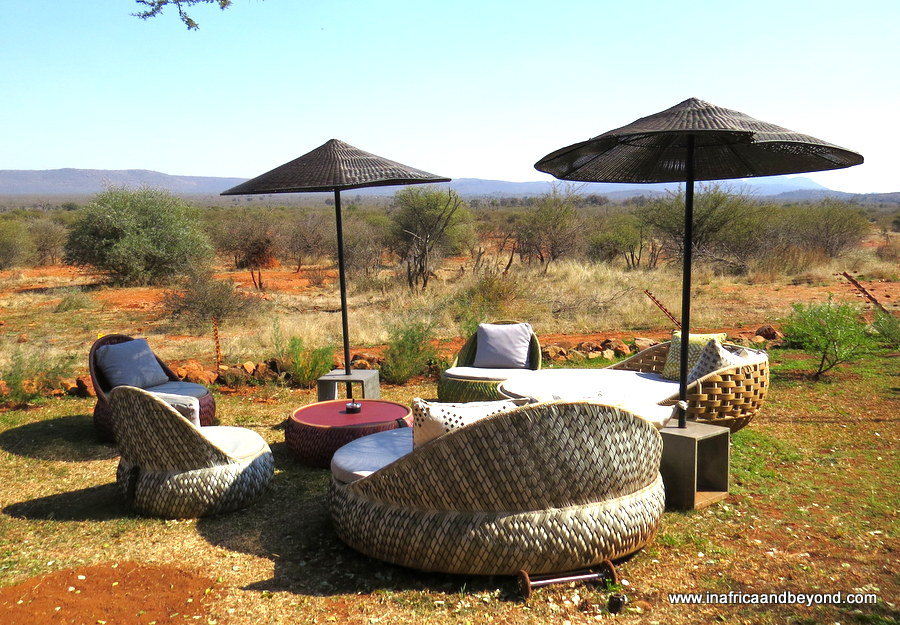 Guests are welcomed to the lodge by singing staff and chilled drinks, then led to the communal areas, a delightful collection of cosy, inviting spaces and viewing decks overlooking the Dwarsberg Mountains and the Madikwe Valley, where elephants graze. Retractable floor-to-ceiling glass doors and windows throughout the lodge take maximum advantage of the panoramic vistas and bring the outdoors in. 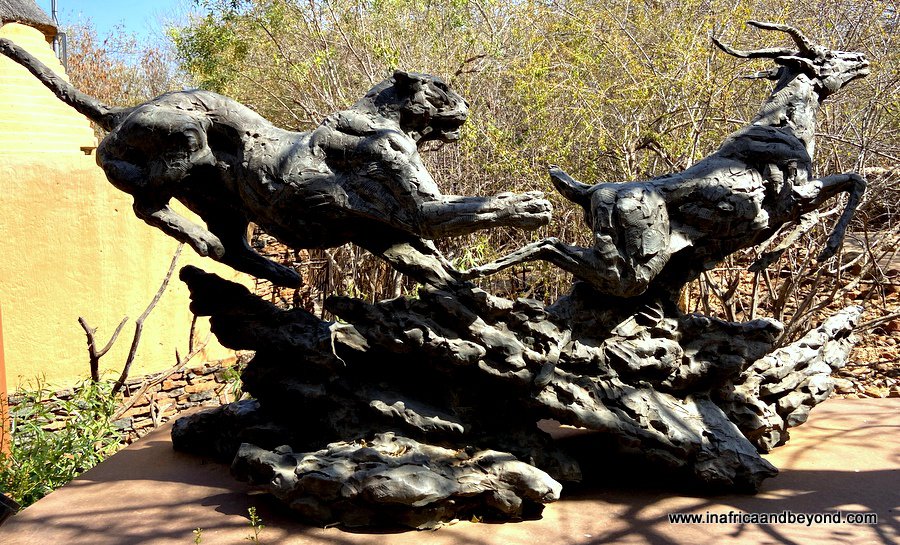 Art features prominently at Molori with a priceless collection of eclectic local and international art pieces carefully curated by the owners. A design update was recently completed which has resulted in uber-chic interiors seldom seen in the African bush. The update includes a collaboration with globally acclaimed local artists whose contemporary artworks have been transformed into large, colourful floor rugs. We saw some of the unique rugs on an art tour with Anthony, the lodge manager, along with other impressive artworks by the likes of Dylan Lewis, Lady Skollie and Edoardo Villa. 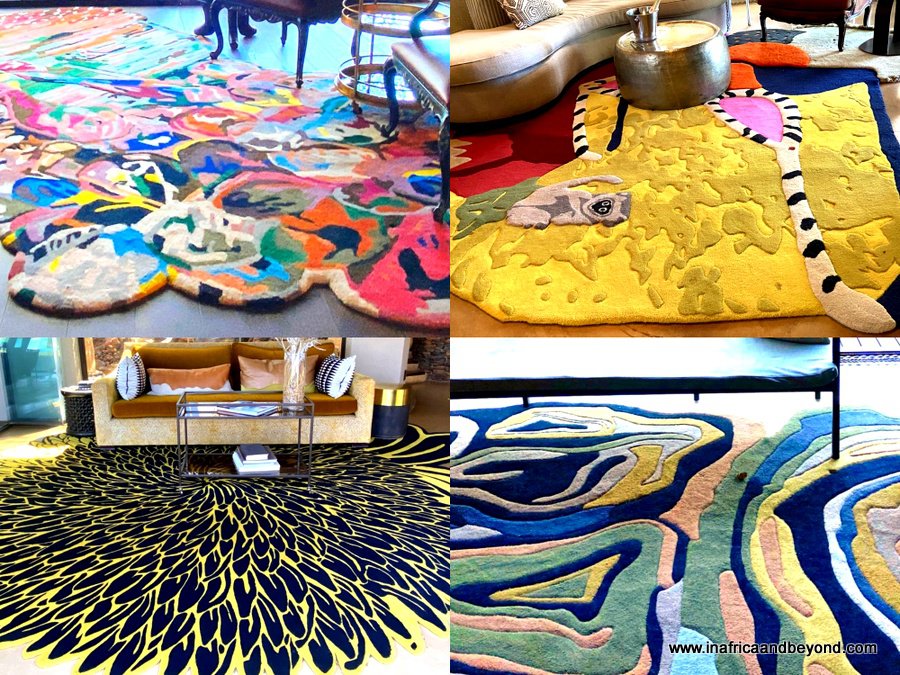 There are just five designer suites, sufficiently distanced from each other to allow ample privacy. Each one has its own private deck with an infinity pool overlooking the reserve. We stayed in the stunning Molelo Presidential Suite, which must surely be one of the most beautiful safari suites in South Africa. 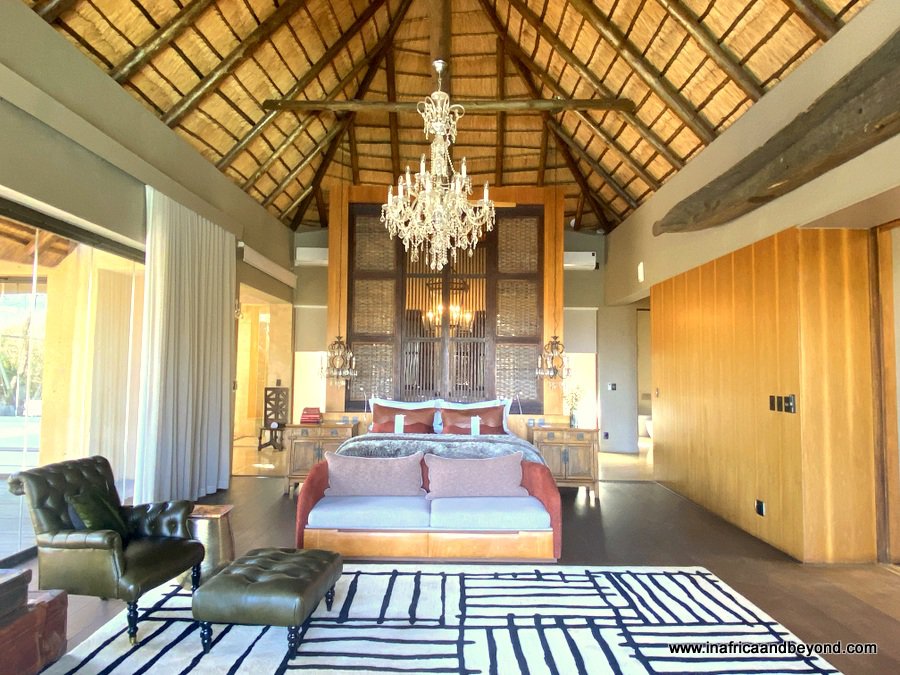 Antique Tanzanian doors lead into the suite, and mokoros grace the walls. With two bedrooms, a spacious lounge area, a study, a huge bathroom area with a walk-in dressing room, a kitchen and a breathtaking outdoor deck, it was palatial. 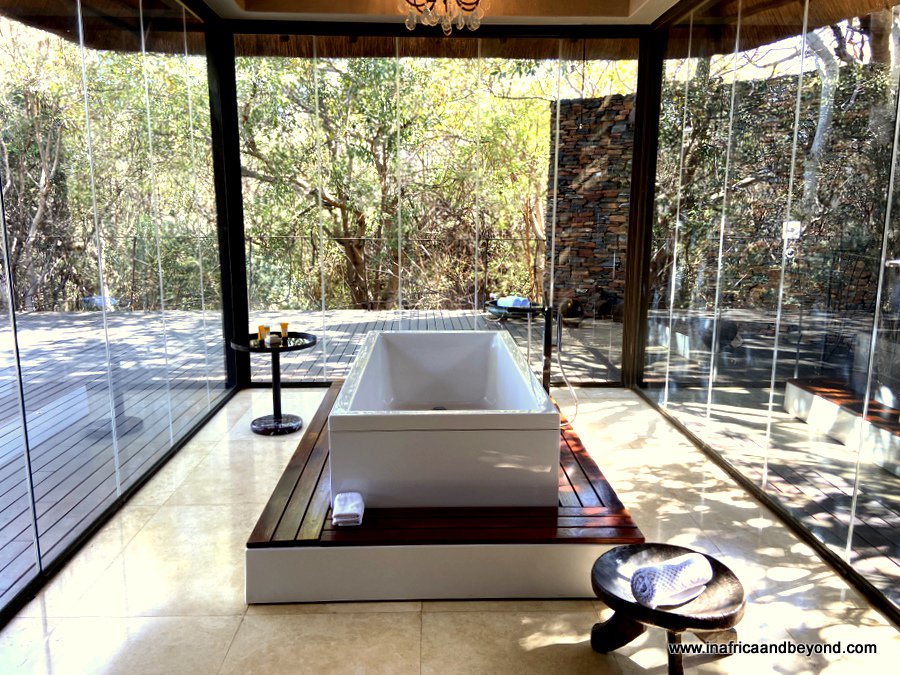 The main bedroom featured a Fendi daybed, a fully stocked mini-bar, a Nespresso machine, a wide flat-screen television, a DVD player and boardgames. Summer and winter bathrobes were both provided. The study was stocked with an impressive collection of National Geographic magazines dating back to the 1940s. 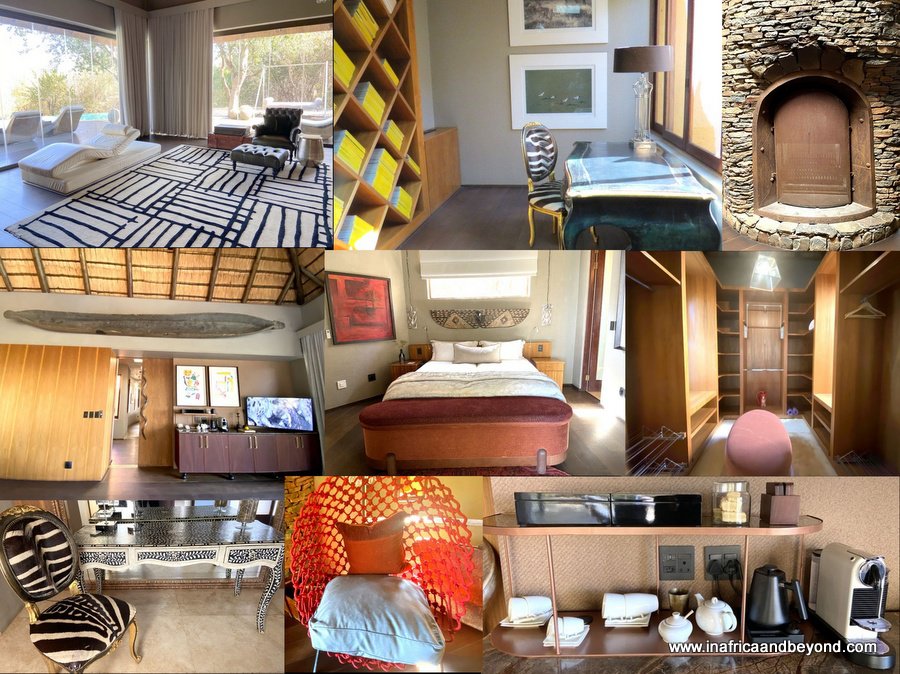 Our private wraparound deck had a huge infinity pool, a jacuzzi, a telescope to observe the wildlife, a Phillip Plein swing bed, an outdoor shower, sunbeds and a daybed. I'm not one to miss a game drive, especially not in the game-rich Madikwe Game Reserve, but it was rather difficult to tear myself away from my sumptuous suite. 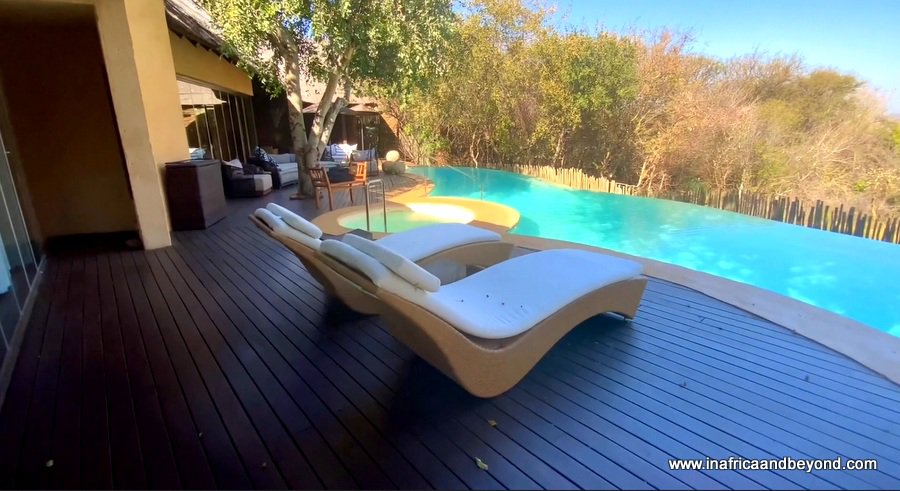 Even the game drives were on another level though. Vehicles are customized to include a box – instead of a middle seat – which contains binoculars, sunscreen, and other essentials. Game drive survival kits for cold mornings include a hot water bottle, handwarmers, and blankets. No time to have coffee before your game drive? No problem. Your ranger will bring coffee on the go in a mini Stanley flask with muffins and rusks. Feel like sleeping in? No problem. You can opt to go on a game drive later in the day or night.

Breakfast stops on morning game drives included parfait, fresh muffins and rusks while at afternoon stops, we were treated to dolmades, olives, chips and nuts. Our ranger, Lucky, even made pancakes for us in the bush, complete with fresh cream, strawberries and Nutella! 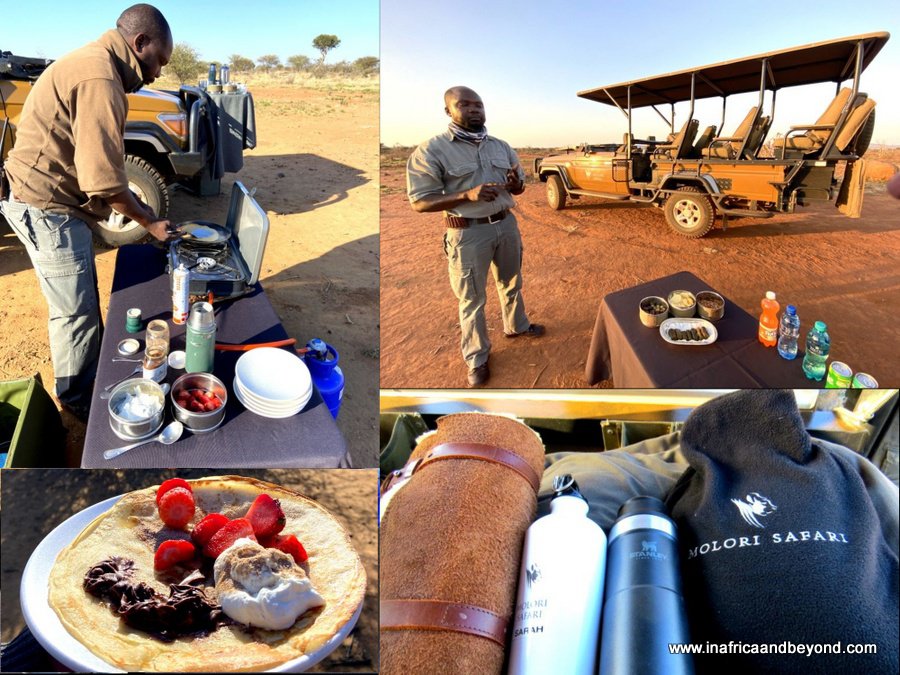 The wildlife viewing didn’t disappoint either, with a surprise around every bend. One afternoon, we were observing a pair of iguanas, when a squeaking wild dog pup burst out of a clearing and ran into the bush on the opposite side. We followed it to figure out what had happened and minutes later, the rest of the wild dog pack appeared looking frazzled. Lucky quickly noticed that they were missing one pup and deduced that a lion may have taken it. After a while, a pair of young male lions emerged, one looking bloody, in search of the wild dogs. It was an exciting afternoon. 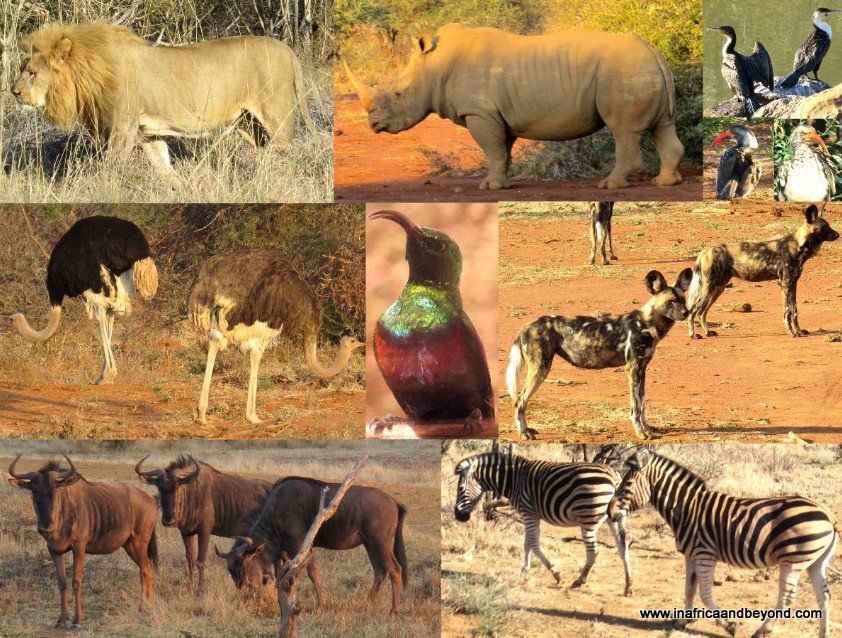 Some of the wildlife and birdlife we saw

In the evening, Lucky did some stargazing with us at the in-house observatory. Madikwe is known for its clear night skies but this was no ordinary stargazing. Molori has one of the largest privately owned telescopes in Southern Africa and it was fascinating to see the extraordinary night sky through it. We saw Saturn and its rings, and the Jewel Box cluster, inter alia. 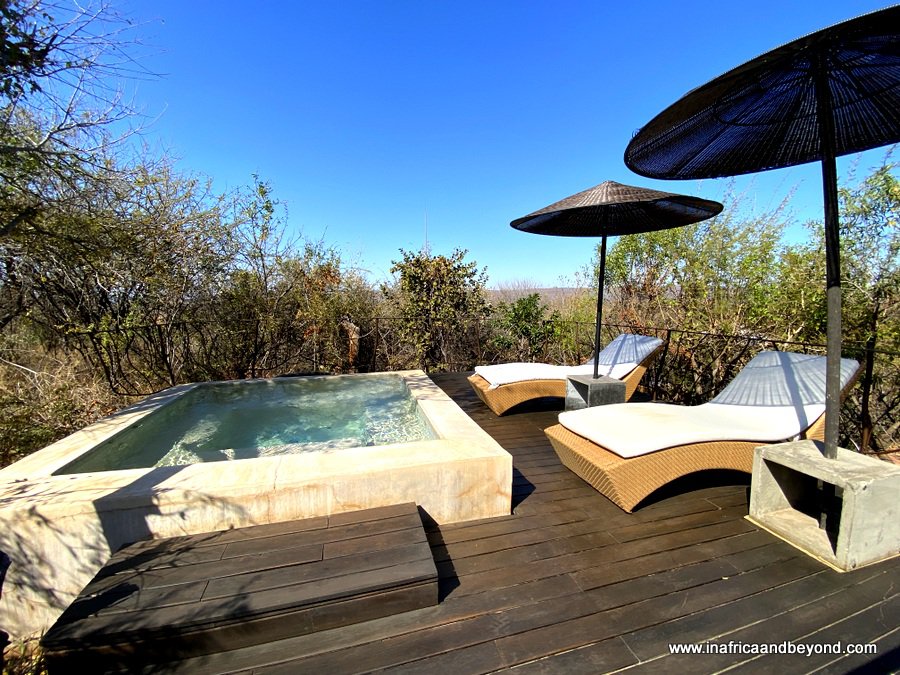 At the lodge, one can relax in the library with a book, enjoy the Nordic sauna or an al fresco massage at the spa, work out in the fitness centre, learn some culinary skills in a cooking class, or soak in the jacuzzi on the highest mountainside deck as you watch the wildlife below. I loved the elegant underground hide where we had amazing views of elephants, giraffes, and warthogs quenching their thirst at the waterhole at close range - a photographer's dream. 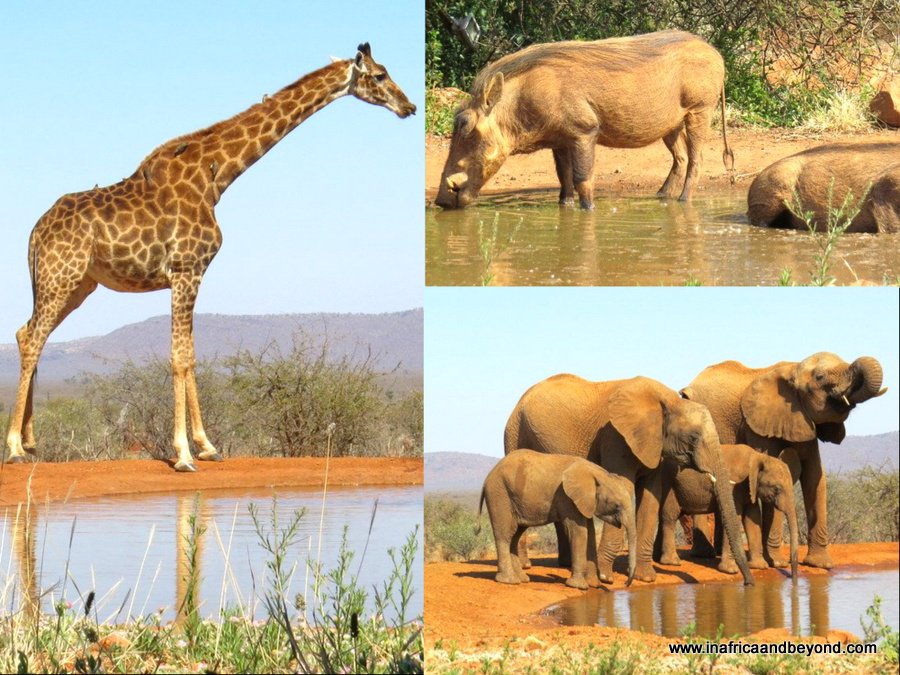 Views at the hide

The kitchen is headed by Marc Proenca, previously the executive head chef at the acclaimed Proud Mary restaurant in Rosebank, and the food was wholesome and delicious. 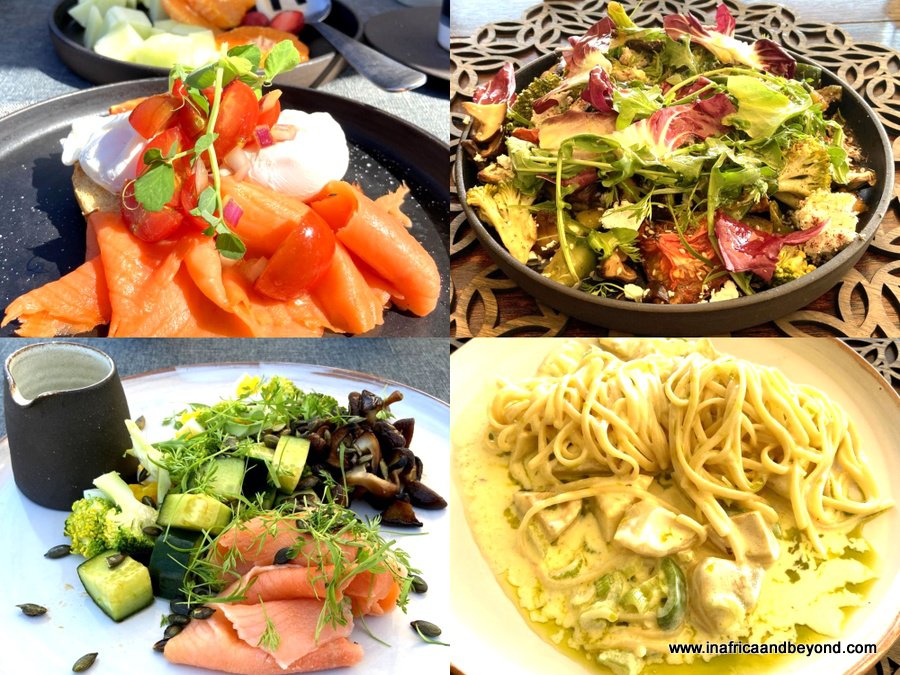 There are no set menus or venues. Guests are consulted regarding the menu for the next meal, and dining venues vary at every meal. 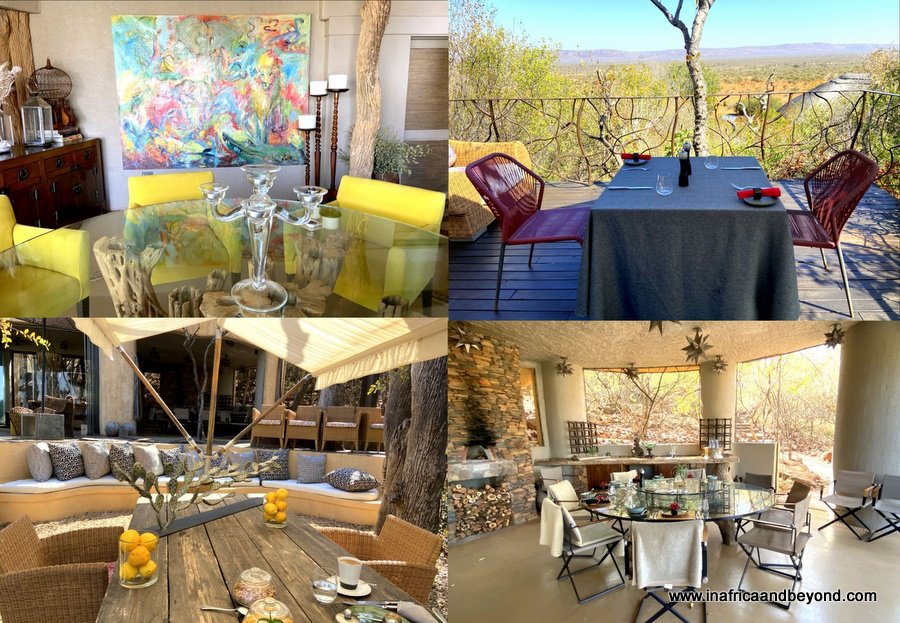 Mere photos couldn't capture the beauty of this place so I did a short video tour too.

If you are looking for a truly bespoke safari experience with personalised service, that will tantalise your senses, then let Molori Safari make your African dream come true. 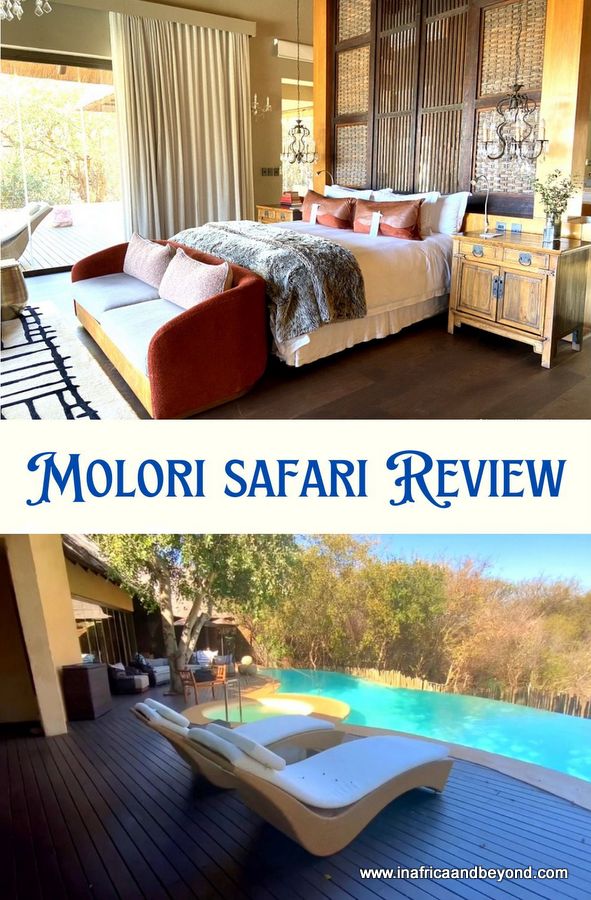