Protea Hotel by Marriott Clarens - Luxury in the heart of Clarens 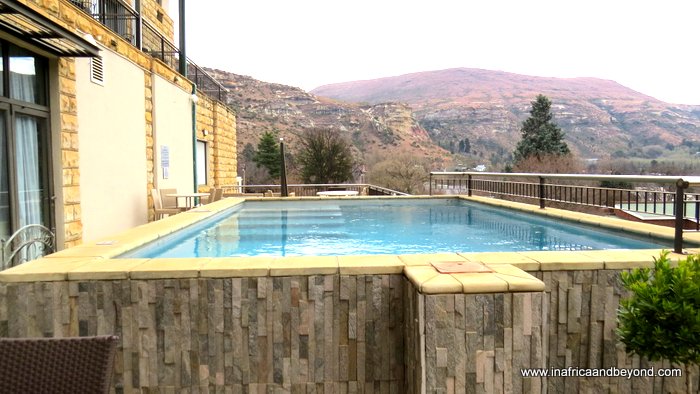 Clarens…aptly named the Jewel of the Free State. It had been ten years since I was last there and I was looking forward to visiting again, en route to Johannesburg from Lesotho. The picturesque town is known for its beautiful surroundings, its artistic attractions, and plethora of adventure activities, such as quad biking, hiking, fishing, abseiling and white water rafting. 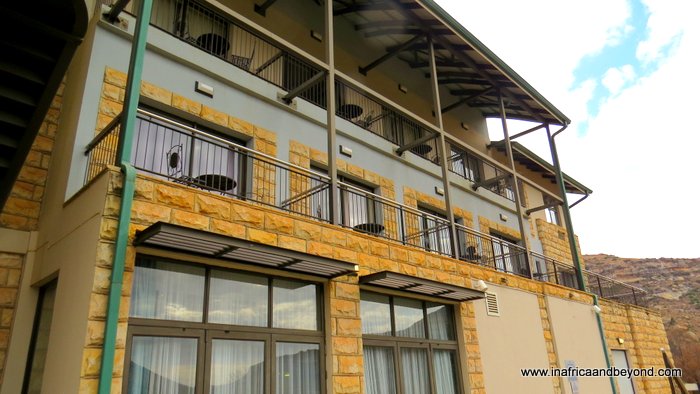 A quick Google search revealed that the Protea Hotel by Marriott Clarens was one of the best places to stay in Clarens and that was our home for the night. As we pulled into the parking lot of the hotel, we noticed an abundance of exclusive cars parked there. Shortly thereafter we learnt that there was a Supercar Lifestyle event taking place in Clarens that weekend and our hotel was one of the main hosts of the event. 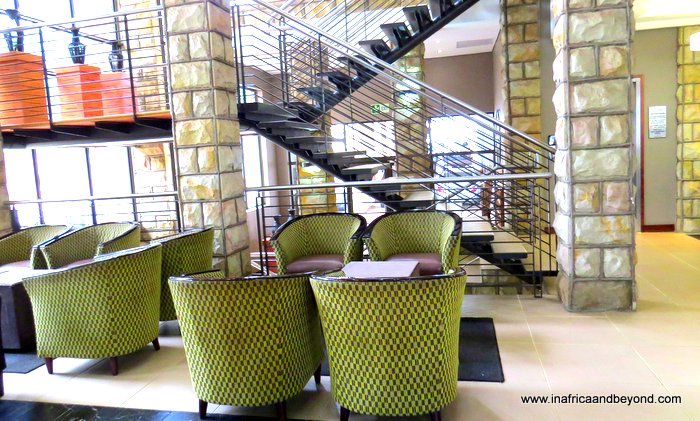 We entered the glass and sandstone building. The interiors are inspired by the surroundings -reflecting earthy tones with splashes of emerald green and sombre gold. Everything looked new and in mint condition. A popcorn machine and pitchers of iced tea welcomed us in the entrance lobby, to the kids delight, and they were given bags of popcorn to munch on soon enough. 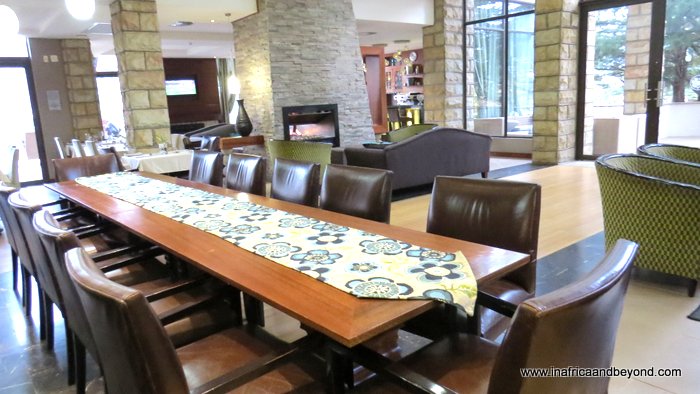 The hotel has seventy rooms. As all of them are two-sleepers, we had two rooms – one for us and one for the kids. The inter-leading rooms had already been booked out due to the popularity of the hotel. Our mountain-facing room had a king size bed, a desk, a television, a chest of drawers and cupboards, a balcony with a small table and chairs, a coffee machine, and a small fridge. Both rooms had washbasins in the room, open-plan shower cubicles and separate toilets. The air-conditioning kept us comfortably ensconced in our warm room while cold winds raged outside. However, that didn’t stop me from enjoying a cup of coffee on the balcony while admiring the panoramic views. At turndown, we were given Forest Fairies nougats, another winning touch. 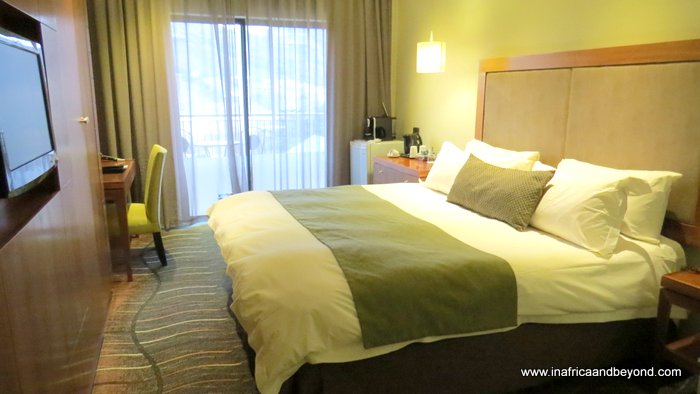 There is an outdoor swimming pool and deck at the hotel, although it was too cold for us to use them. The poolside views of the Maluti Mountains are exquisite though and I could just imagine sitting there for hours in warmer weather, with a refreshing drink in hand. 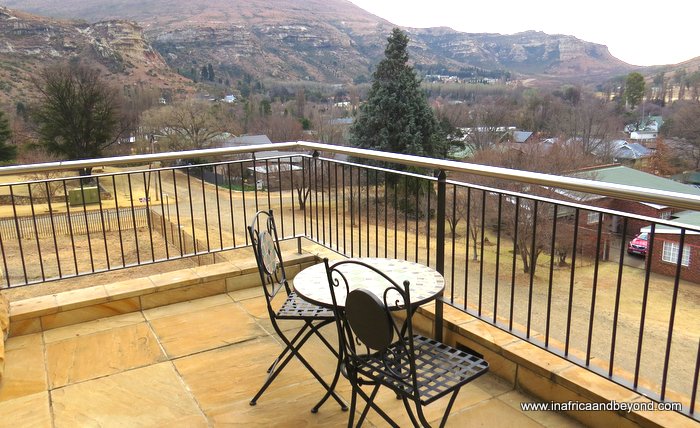 View from the balcony

Breakfast, the next morning, was at the in-house Adamo Restaurant. We indulged in a continental buffet spread of eggs, vegetables and croissants. The children particularly enjoyed using the self-service pancake machine, where a simple press of a button made and popped out delicious, hot pancakes. It was the first time I had ever seen one and I was tempted to get one for my kitchen. 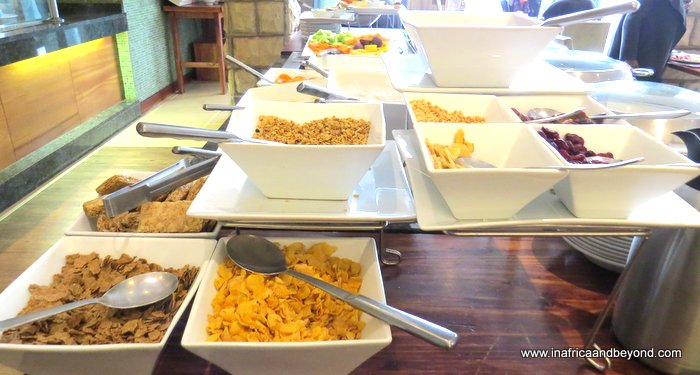 After we had filled our tummies, we took a leisurely stroll around Clarens. The hotel is centrally located, within walking distance of the Market Square, numerous restaurants, art galleries and quirky shops. We browsed the shops, took lots of photographs and bought some delicacies at The Purple Onion. 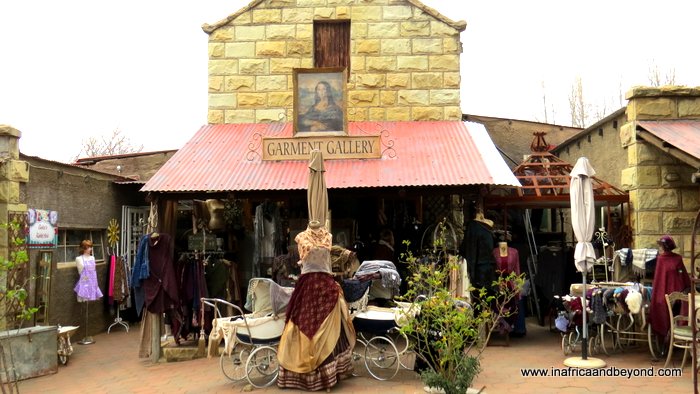 Then we set off to visit Golden Gate National Park, which is just 23 km away.

Clarens is a great place for a weekend getaway from Johannesburg or Durban, or a stopover on the way to Lesotho, which is just two hours away.  Here , you can pause, catch your breath and unwind. And the Protea Hotel by Marriott Clarens is the ideal luxurious retreat to stay at while you’re doing that.