The fascinating Spitzkoppe Mountains of Namibia 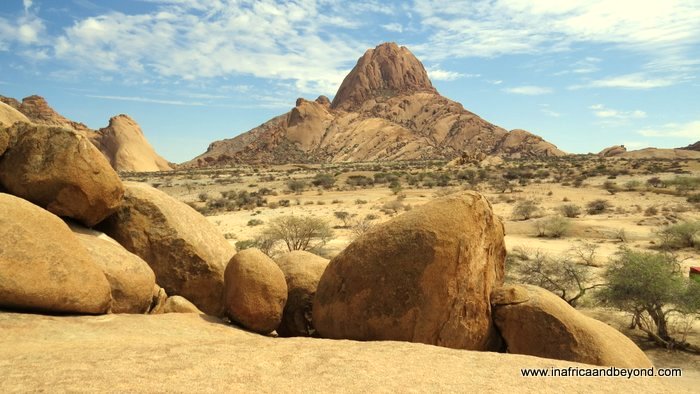 The Spitzkoppe Mountains of Namibia

North-east of Swakopmund in Namibia, in the Southern Damaraland, you will find a group of mountains with striking granite peaks and smooth boulders in unusual shapes and sizes. More than 700 million years old, the main peak is often referred to as the "Matterhorn of Namibia", due to its resemblance to its Swiss counterpart. The other-worldly mountains are among Namibia's most distinctive landmarks. In fact, they have featured in a few movies including "2001: A Space Odyssey" and "10,000 BC". While doing research on Namibia, I saw pictures of Spitzkoppe and knew that I had to go there to see them for myself. 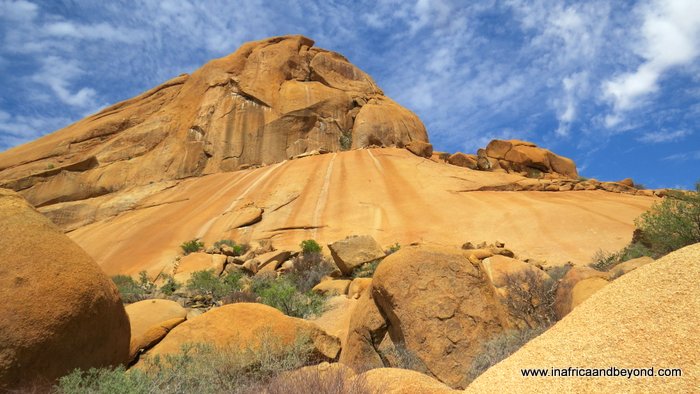 We made our way there from Swakopmund, following a detour to Cape Cross Seal Colony. After driving on long stretches of dirt road, we began seeing the outlines of the copper mountains in the distance. But first we were headed to our home for the evening, the Spitzkoppe Mountain Tented Camp. 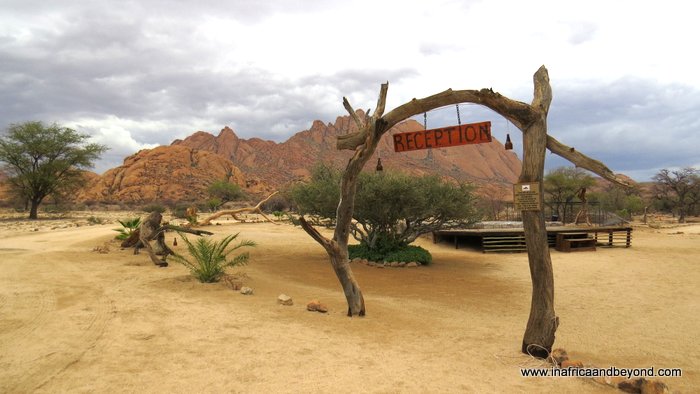 Just one kilometre from the entrance to the Spitzkoppe Mountains, the camp stood against the backdrop of the mountains. Although it was not the type of place we usually stayed in, we decided to experience something more adventurous for a change. 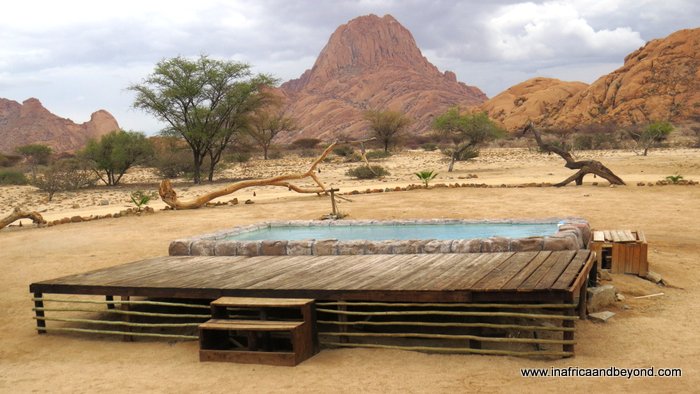 There were eight raised safari tents and two camp sites. A small swimming pool stood in front of the informal reception/ restaurant area. Our tent had four single beds, a small table and two chairs. All the tents had their own showers, flush toilets and basins on the decks. Water at the camp is heated with a donkey boiler. However, our bathroom was roofless and when the rain came down that evening, we had to abandon any ideas of toilet visits till the rain stopped. 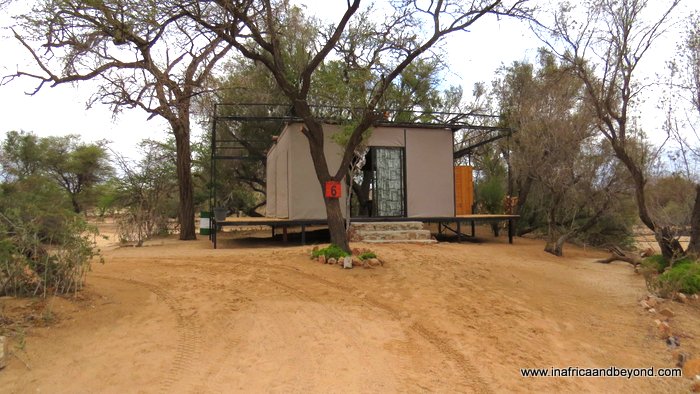 The back entrance of the tent opened on to huge trees overlooking a clearing. A hammock in the trees served to entertain my kids for a long while, as there was no television and no internet. The following morning, we awoke to a rooster crowing and a multitude of other birds creating a chorus. Four magnificent resident ostriches strutted their stuff outside our tent. It was a great place to reconnect with nature while enjoying the serenity. 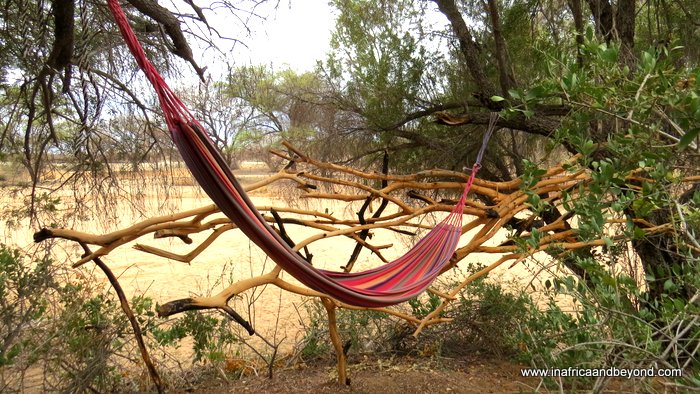 We packed our car and headed for the mountains. En route, we saw a stall made out of recycled cans.  After paying the R295 entrance fee (R55 pp + R75 for the car), we drove around the park, marvelling at the beautiful mountains and boulders. There are community-run campsites in the shade of the boulders too. 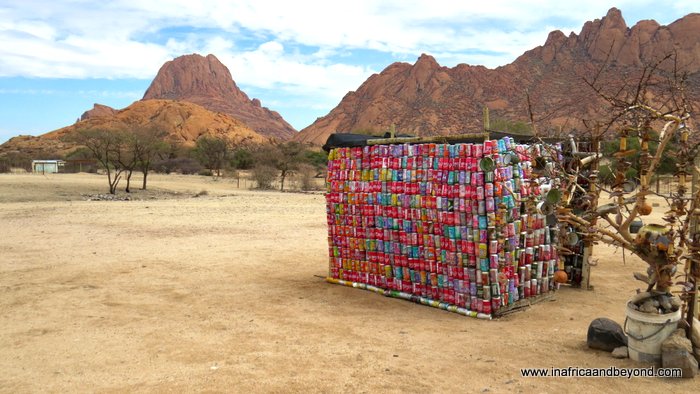 This is a hiker’s paradise and the early birds had already ascended a few peaks and boulders. The main peak is called Gross Spitzkoppe (1728m), the smaller one Klein Spitzkoppe (1584m) and the rounded ones, the Pondok Mountains. Gross Spitzkoppe was first scaled in 1946. Today it draws mountaineers from all over the world. 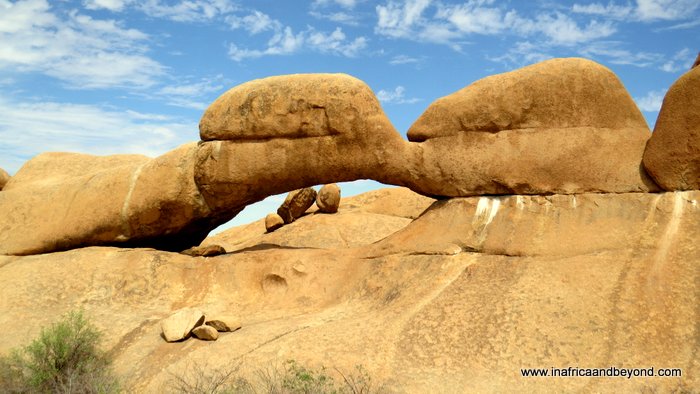 The natural arch was another highlight. We watched as some elderly German tourists attempted to ascend it, after seeing my son run to the top like a mountain goat.   We settled for the gentler slopes, as it was too hot for strenuous climbs. As we drove around, we saw klipspringers, dassies, chameleons, squirrels and prolific birdlife. 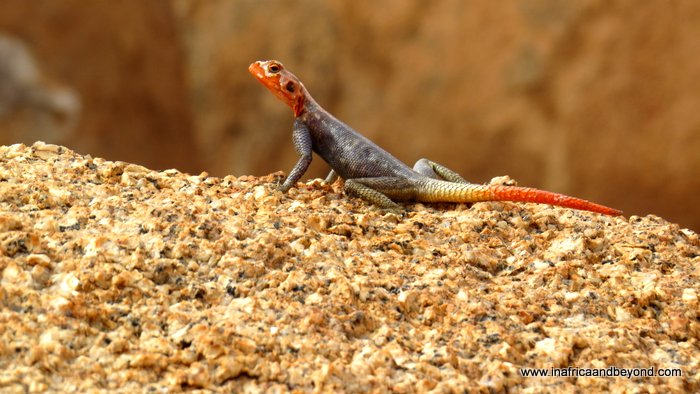 Guided tours are available to see the Bushman paintings in the area. There are almost 40 sites and some date back 4,000 years. Unfortunately, much of it has been vandalised. We didn’t do a tour but we did see some rock art on other boulders we passed.

This is also a great place to see the stars at night. Unfortunately for us, it was raining the night we were there, so we didn't get to see any. 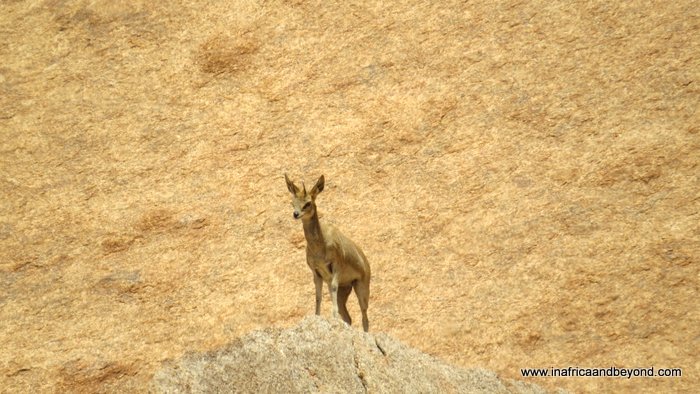 Then it was time to head to our next stop near Omaruru. 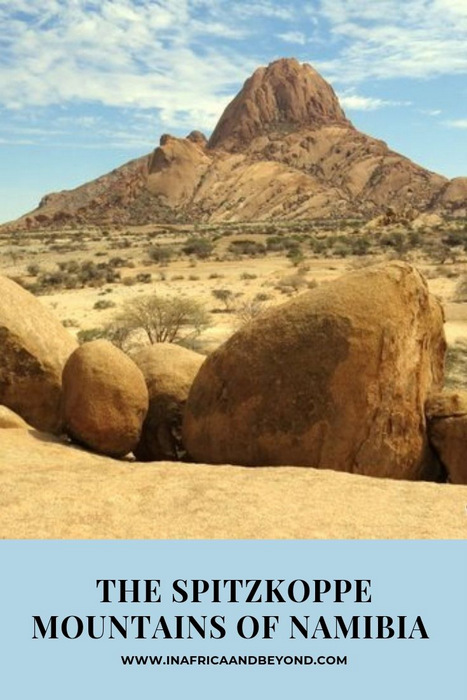 7 comments on “The fascinating Spitzkoppe Mountains of Namibia”