Thanda Safari Lodge - so much to love 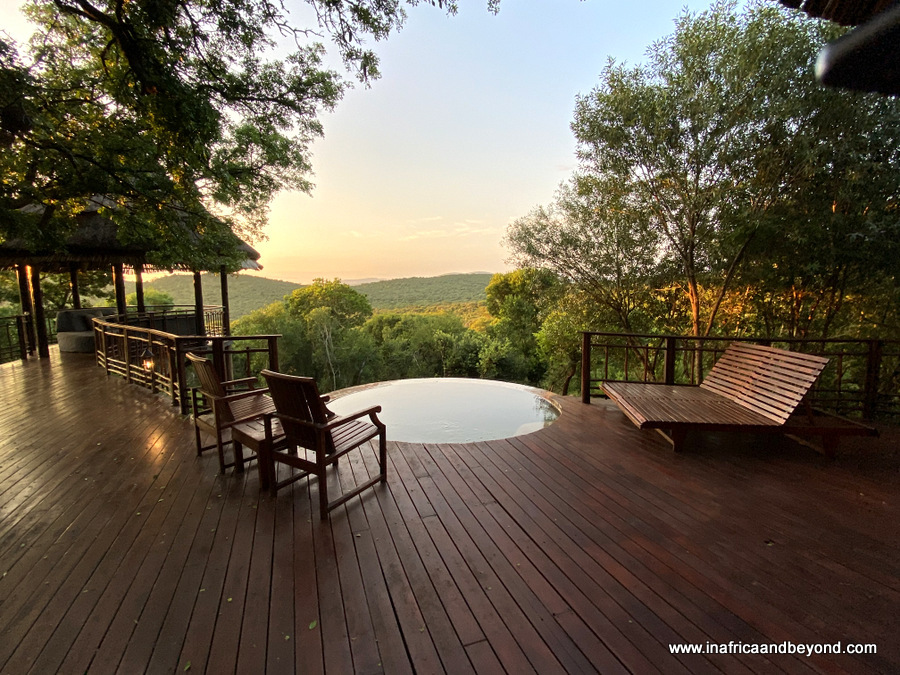 It was a sunny morning in the African bush, and we were tracking a pair of cheetahs – a hungry mother and a daughter on a hunt. The mother seemed totally oblivious of us but the cheeky little one turned around and snarled at us, barely a metre away from our vehicle. She then strode off and rejoined her mother. Alas, after scaring away the first herd of impalas they tried to ambush, the odds were stacked against them. The alarm calls from the tattletale birds sent all the other potential prey into hiding and they opted to relax under a tree instead.

It was incredible being able to observe these attractive teary-eyed cats at close range for so long, with no other vehicles anywhere in sight. We were at the five-star Thanda Safari, a 14,000 ha Big Five private game reserve, in Northern KwaZulu Natal, shared by the three Thanda properties only – the nine-roomed Thanda Safari Lodge, the owners’ luxury private villa and the tented camp with its colonial safari-style tents which opens for exclusive use bookings and special events only. 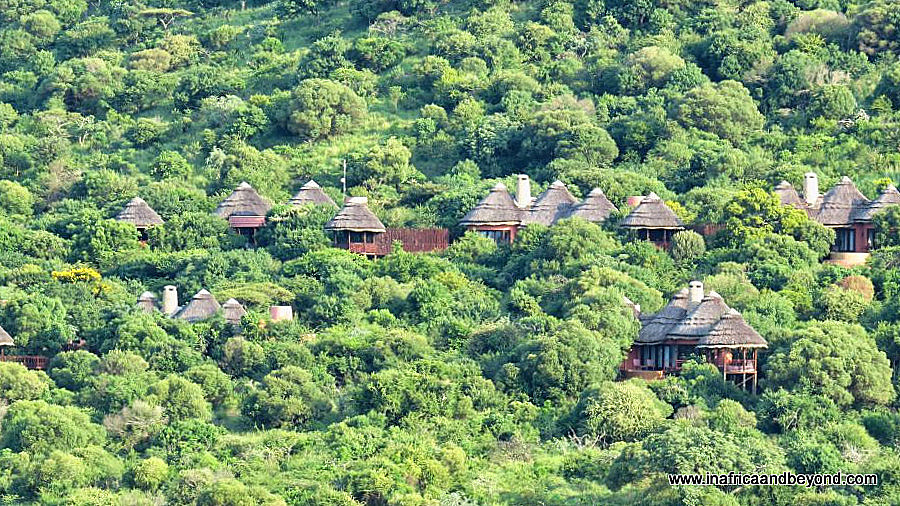 The lodge from across the hills

“Thanda” means 'love' in isiZulu and there is so much to love here – and that’s not just in my humble opinion. A member of The Leading Hotels of the World, Thanda Safari Lodge has won The World’s Leading Luxury Lodge award multiple times and Villa iZulu, Thanda’s exclusive private villa, has been voted the World’s Leading Luxury Private Villa for the past 4 years. Thanda Safari was also ranked as one of the 20 Top Resorts in South Africa in the 2020 Conde Nast Traveller Awards. 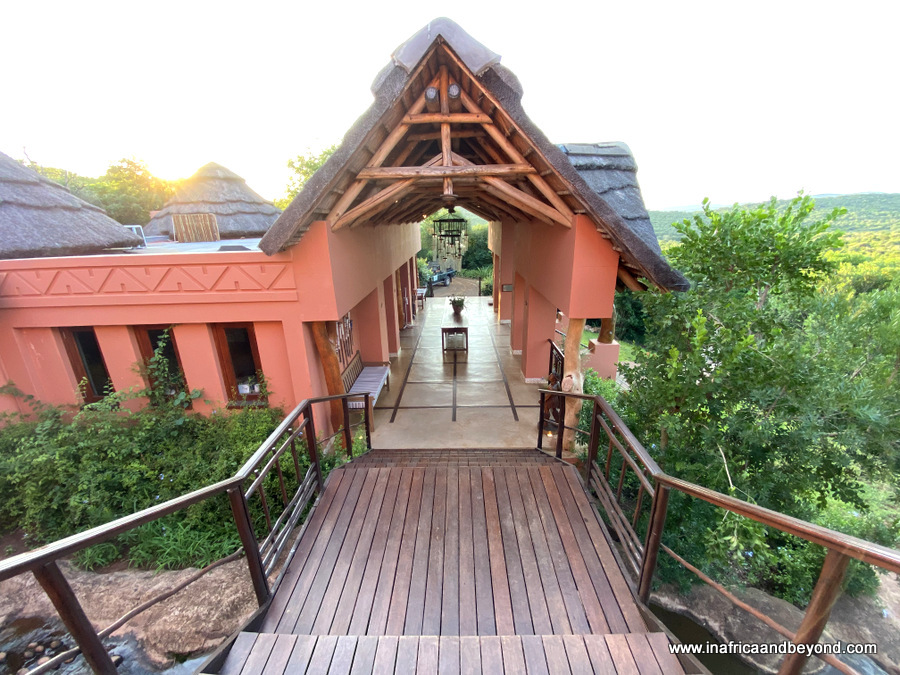 The reserve was opened in May 2004 by the late King Goodwill Zwelithini, former King of the Zulu nation. The design and décor of the lodges celebrate Zulu culture and staff are from the surrounding local communities. In non-COVID times, exposure to the local culture extends to community visits. 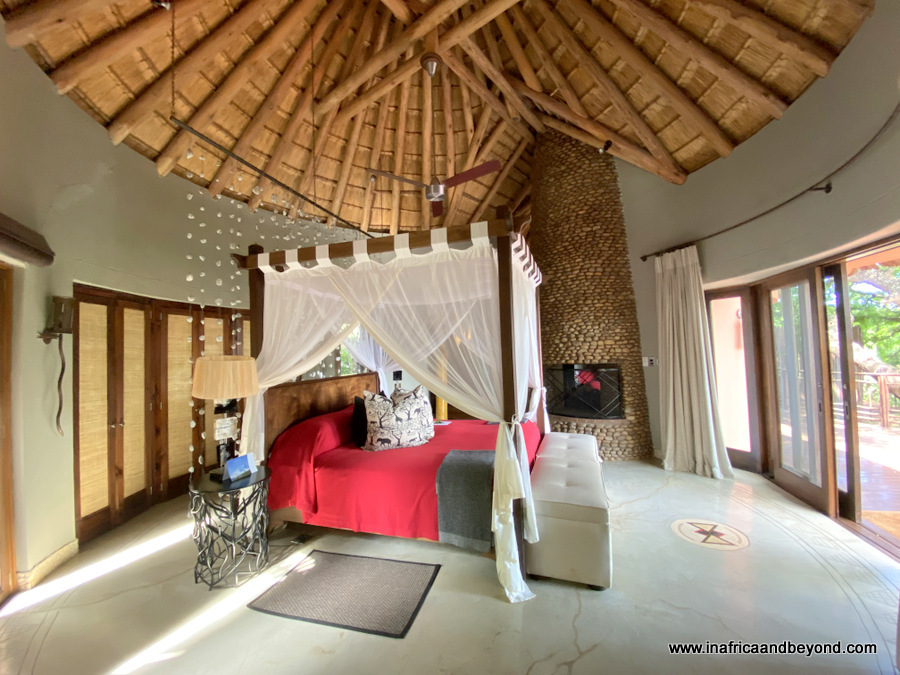 The sumptuous bush suites at Safari Lodge, where we stayed, are shaped like traditional Zulu homesteads. The spacious bedroom was adjoined by a lounge area, which had a fireplace, beverage and snack stations, and a complimentary minibar customised to our requirements. Two beds were set up for our kids, still leaving copious amounts of space. Splashes of red – the colour of love – and beaded crafts spiced up the interiors. 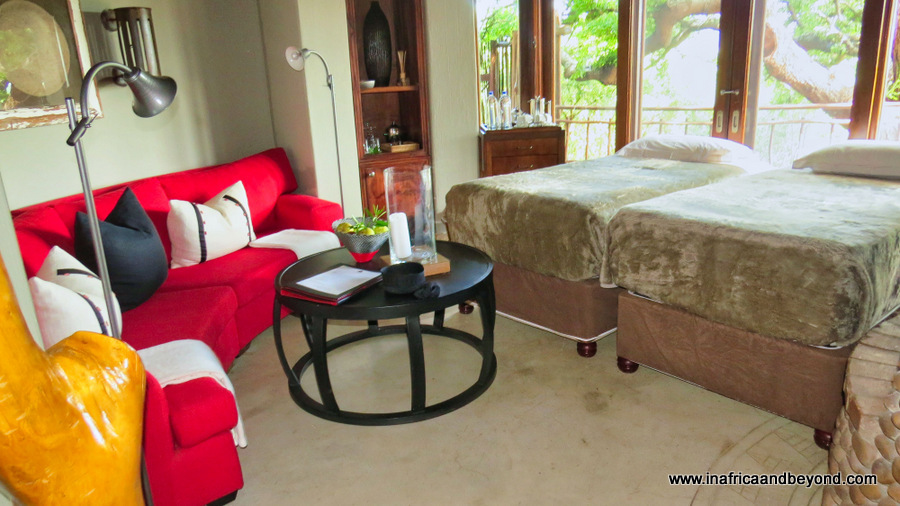 The bathroom area was the size of a separate suite and featured a dressing room, an oval stand-alone bathtub with panoramic views, as well as indoor and outdoor showers. 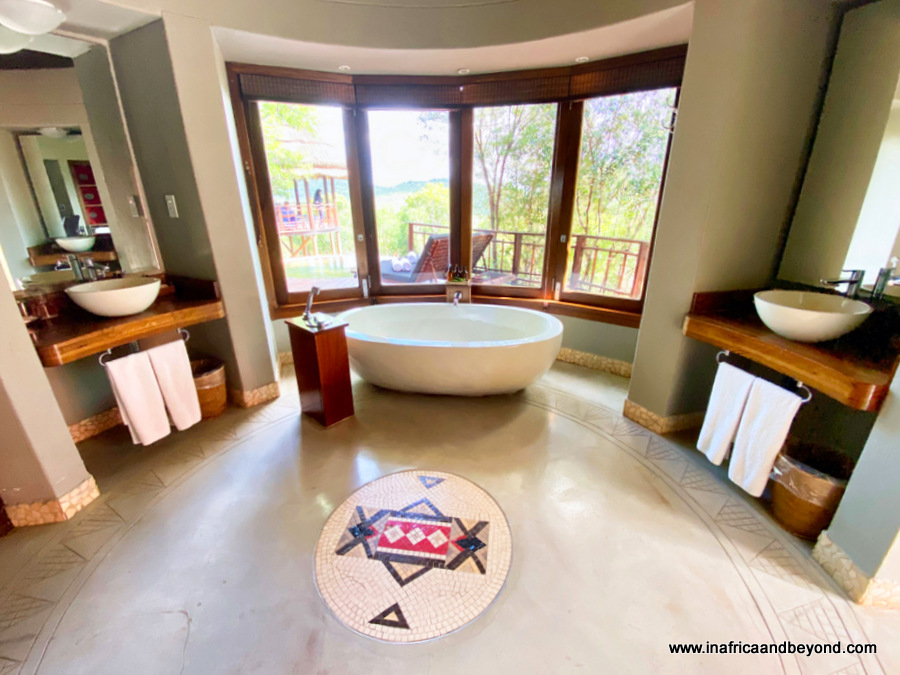 The suite opened onto our private viewing deck, which was one of the highlights of our stay. It boasted its own boma, plunge pool with loungers, and a sala with a circular daybed. The endless views of the verdant bush stretched towards the horizon and we would have stayed there all day if the game drives and delicious meals weren’t equally enticing. 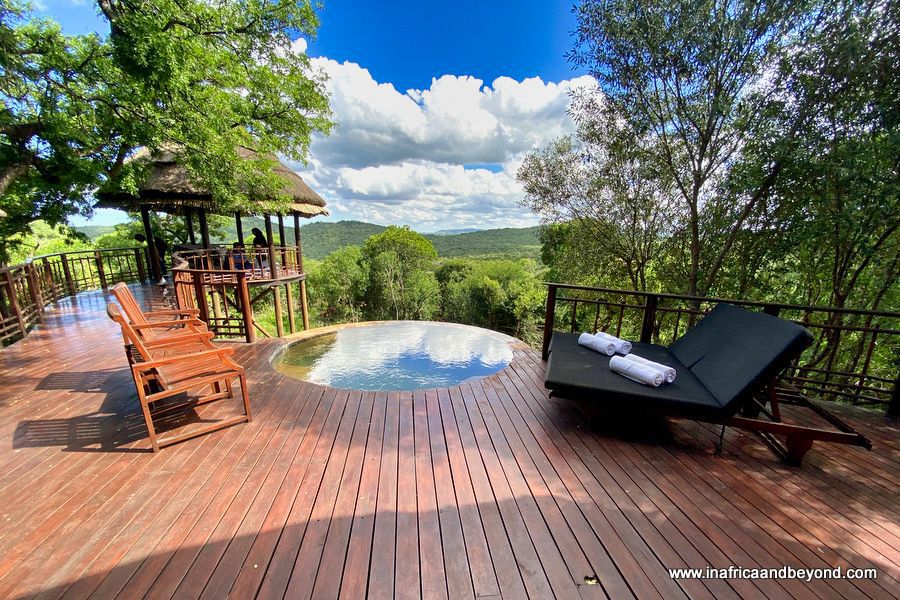 The game drives were rewarding, with exceptional sightings. We got close to lions, elephants, (de-horned) rhinos, buffalos, cheetahs and so much more. Twitchers will be delighted to learn that there are more than 400 different bird species here. 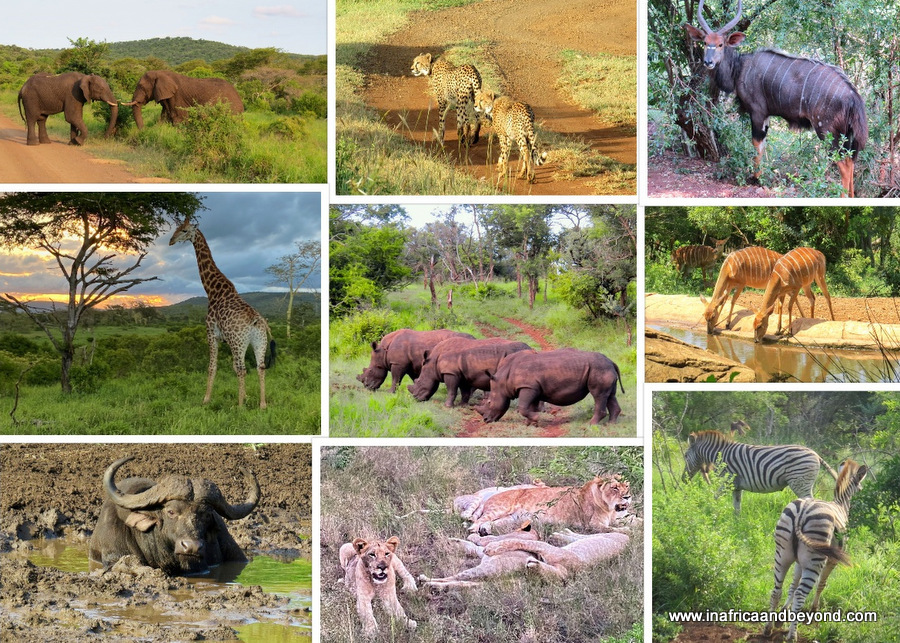 Our guide, Buselaphi, was one of the funniest we've ever had and he kept us in stitches with his safari humour, while Wineth, our eagle-eyed tracker, scoured the ground for tracks and the bushes for wildlife. Even my easily bored kids were enthralled. 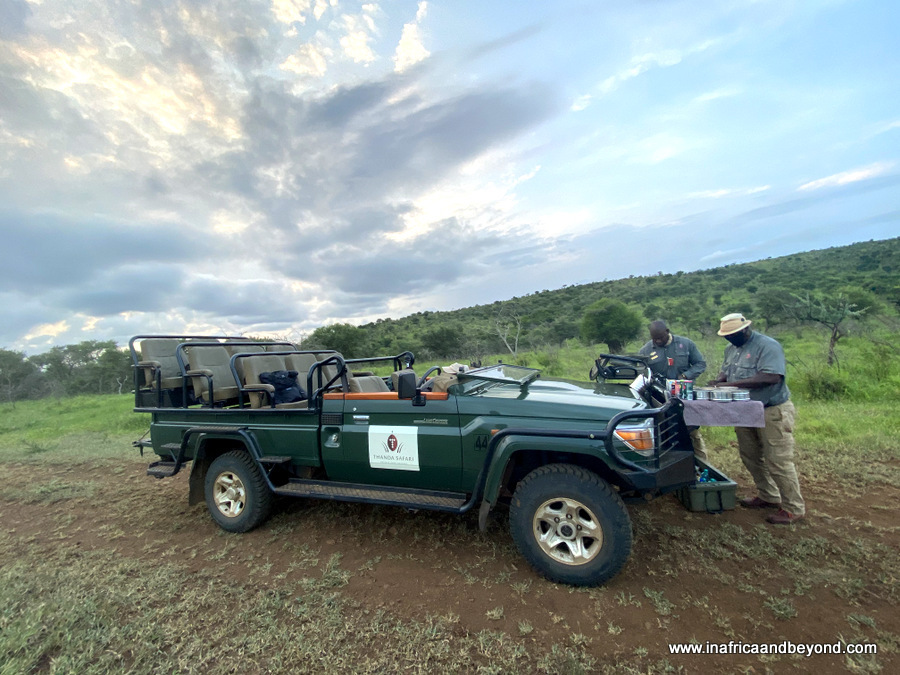 Meals at Thanda Safari were feasts for the eyes and the palate, and our dietary requirements were well-catered to. We enjoyed most of our food al fresco and dinner was served under the stars. 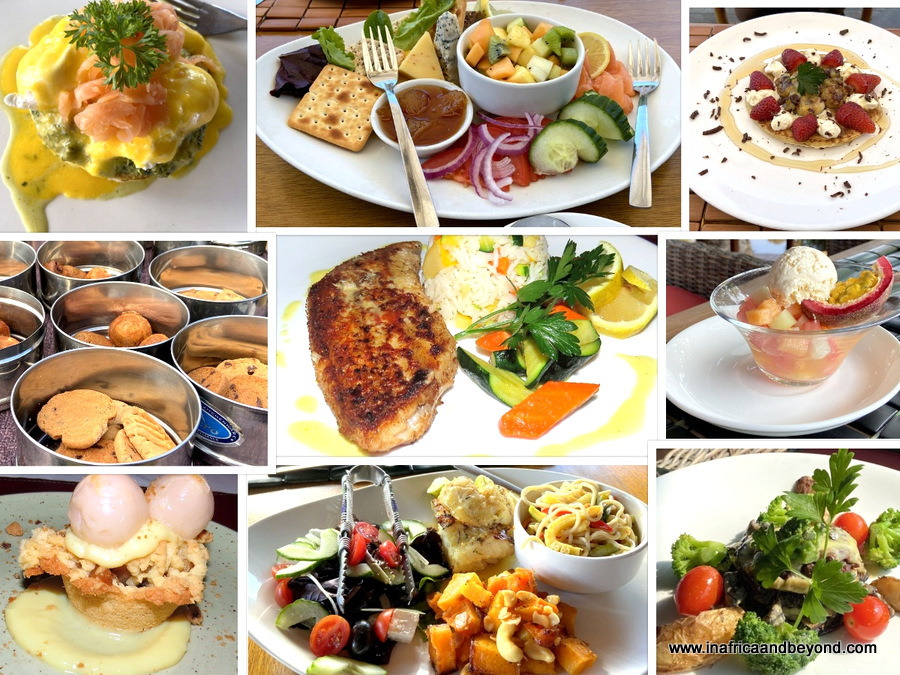 The evening before we left happened to be days away from my birthday.  On arrival at the dinner table, I found a birthday message, spelt out in pebbles. As we were awaiting dessert, I heard the strains of a melodious happy birthday and looked up to see the staff approaching with a birthday cake in hand. They said that they were celebrating early because I wouldn’t be there to celebrate with them on my actual birthday. I was so touched! This was just one more expression of the love at Thanda. And yes, after we had enjoyed the cake, we were still served dessert. 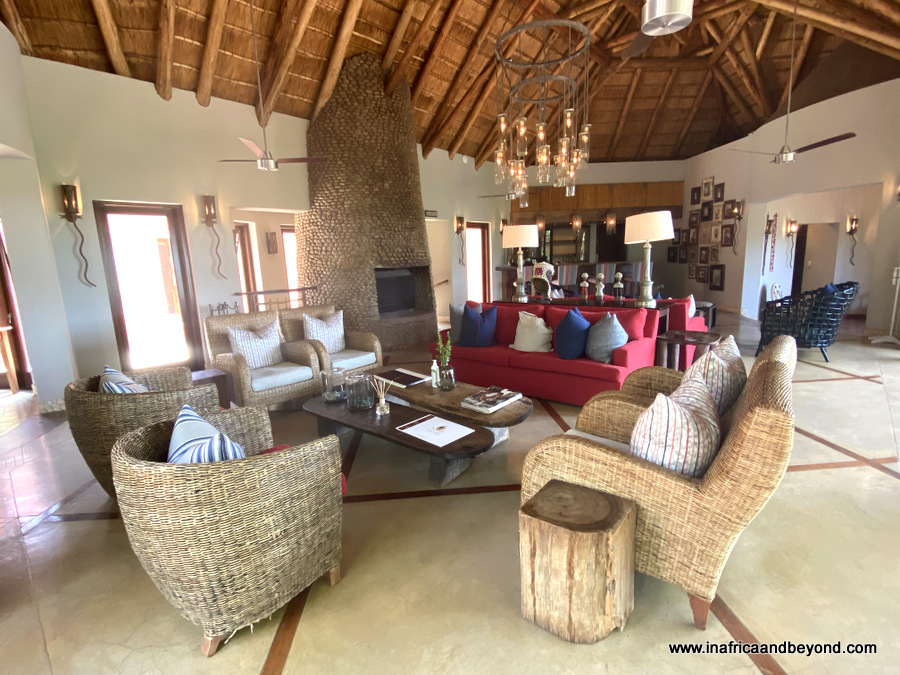 In between meals and game drives, there are many options to occupy yourself. Thanda Safari is the first reserve I’ve visited with its own resident wildlife photographer – Christian Sperka, and you can book a complimentary wildlife photography lesson with him. More daring options include bush walks, rhino tracking and opportunities to participate in wildlife conservation programmes as a volunteer.

For more sedentary options, you can relax in your suite, or in the public areas. The latter are open, airy spaces accessorised with warm leather, dark wood and African art. The wraparound timber decks and well-stocked library overlook the waterhole. A herd of nyala consistently milled about at the lodge, attracted by the water and the surrounding foliage. They were frequently joined by waterbucks and impalas. Lions and elephants have also been known to visit occasionally.

Thanda also has a wellness spa which offers a wide range of treatments, combining western techniques and traditional Zulu practices.

From the rangers to the servers, the service was exceptional all-round. This was manifested in numerous ways, like how the staff knew very soon which drinks each member of the family preferred, special touches like sunscreen before game drives, bedtime fables for the kids and thought-provoking Zulu proverbs for the adults on turndown. This, combined with the stunning suites, great food and substantial expanse of wildlife-rich bushland almost all to yourself, will ensure that you fall in love with Thanda. We did.

COVID protocols include screening when you arrive and daily temperature checking. Masks are worn in public areas and sanitisers are provided.

Children are welcome at Thanda Safari Lodge and Villa iZulu and those under the age of 16 can share with adults. Children under the age of six are not allowed at Thanda Tented Camp. There are special activities, programs, menus and nannies for younger kids. 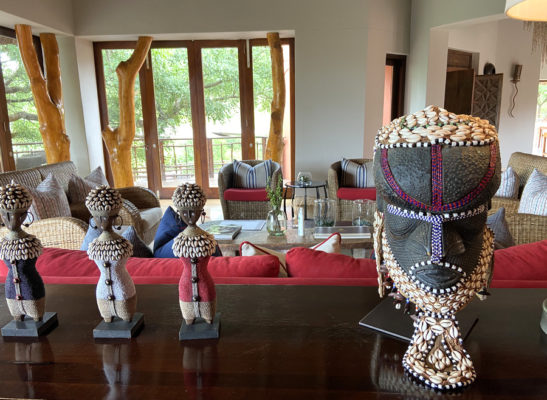 Rates for Thanda Safari Lodge and Villa iZulu are available on request. Booking for all weekend packages is essential. Terms and conditions apply. 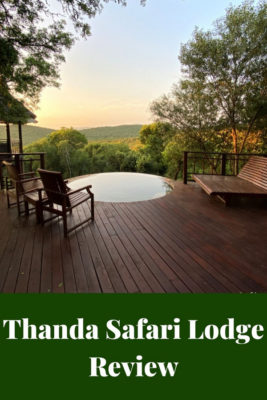 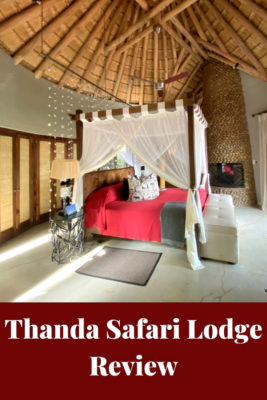 8 comments on “Thanda Safari Lodge - so much to love”