Walter Sisulu Botanical Garden : Things to do in Johannesburg

"A garden must combine the poetic and the mysterious with a feeling of serenity and joy.” Luis Barragan

The Walter Sisulu Botanical Garden is not something one would expect to see in the greater Johannesburg area. Situated below the dramatic, 200-metre-high cliffs of the Roodekrans Ridge in the West Rand, the beautiful expansive garden is like a lush oasis amid the concrete structures. It was voted the best place to get back to nature in Gauteng for 9 years in a row. 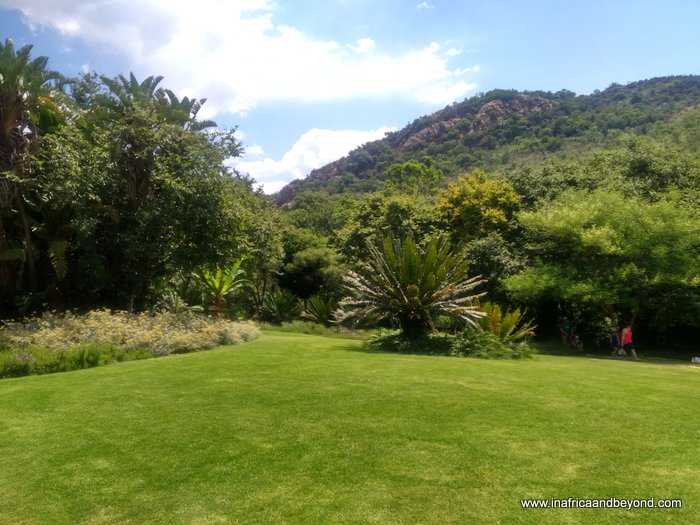 I had last been there when my kids were toddlers, which was a very long time ago. For the past few months, we had been wanting to go there for a picnic and we finally got an opportunity during the school holidays. It was a hot day but the weather inside the garden was cooler, and perfect for a picnic. 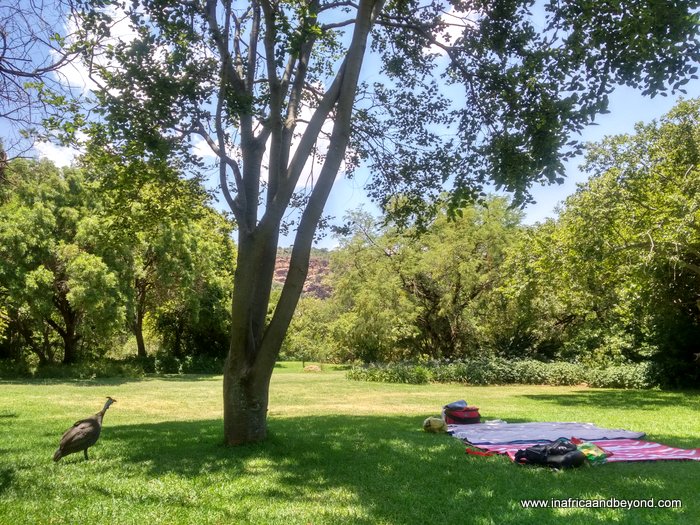 As we parked our car, we were greeted by porters who offered to take our “luggage” for us on their trolleys, to a picnic spot for a small fee. We took up the offer, paid the entrance fees and found ourselves a nice shady spot with benches. After a good meal, we set off to explore the gardens. 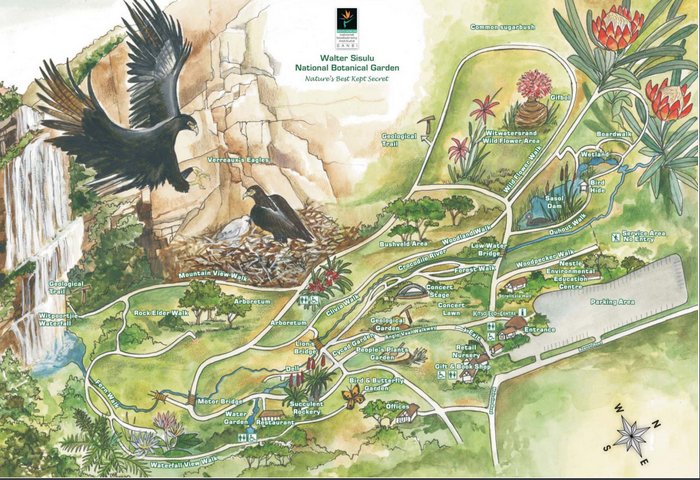 Spanning almost 300 hectares, the gardens have over 600 plant species, 220 bird species, reptiles and some small mammals, including caracal (wild cat), black-backed jackals, hedgehogs, porcupines, rock hyrax (dassie) and some small antelopes. You are not likely to see them though, as they are either nocturnal, or shy, or both.

The garden's most famous residents however are a breeding pair of Verreaux’s Eagles that nest in the cliffs alongside the waterfall. Unfortunately, we didn’t get to see them on this visit. Perhaps it would have been a good idea to take our binoculars with. 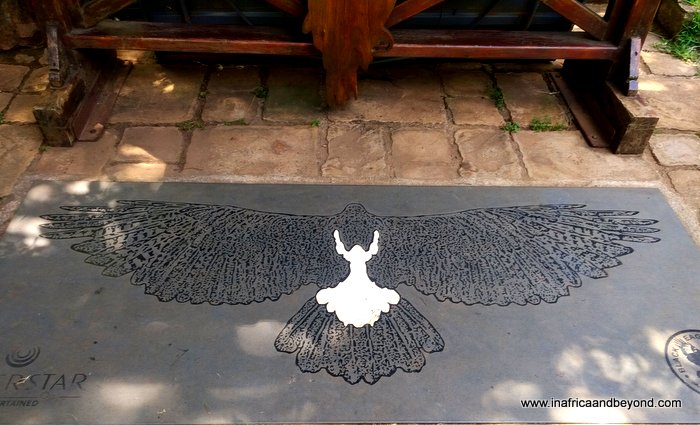 Eagle engraving on the ground

The Gardens were busy but not crowded. The picturesque Witpoortjie Waterfall is the main attraction here. According to the South African National Biodiversity Institute, the falls probably get their name from the fact that visitors, travelling from Johannesburg by train, used to disembark at Witpoortjie Station and walk down to the falls in the late 19th century. It falls into a pool at the bottom.

The landscaped lawns are divided into different sections and creatively sculptured benches dot the grounds.   There are several walking and hiking trails winding through the gardens. The longest one is 3.5 km. Starting next to the waterfall, it will take you to the summit of the waterfall and  around the reserve. Be warned though, it involves some steep ascents.

There is a dam with a bird hide where one can relax and observe the resident birds. 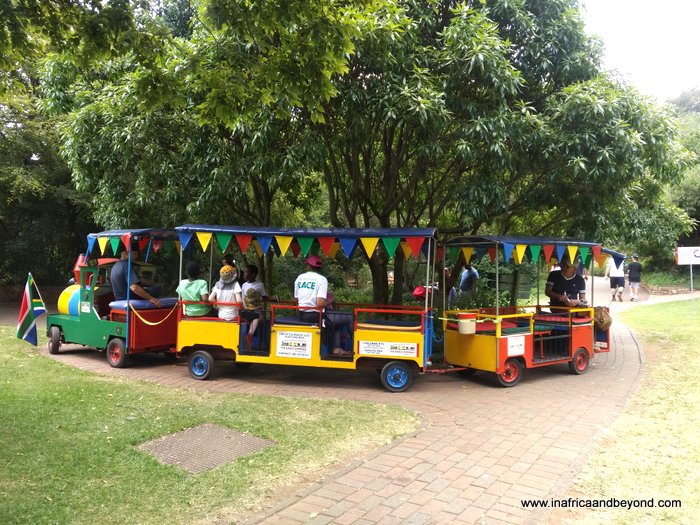 Near the restaurant, there is a kids’ playground area and a small colourful train which takes little kids for a ride around the gardens. An ice cream van sells soft-serve ice creams. The Amphitheatre plays host to occasional concerts. 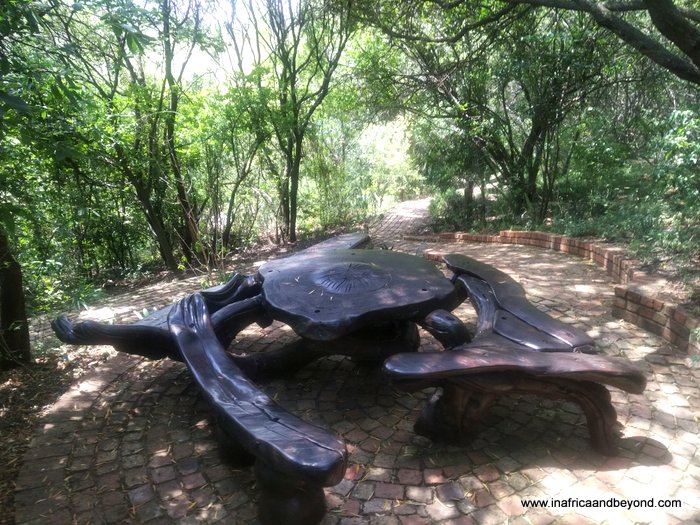 As the garden is a conservation area, balls, bats, frisbees, skateboards, braais, pets etc are not allowed.

We had a lovely family outing at the gardens and left feeling relaxed. It felt as though we had been somewhere far away from the city. 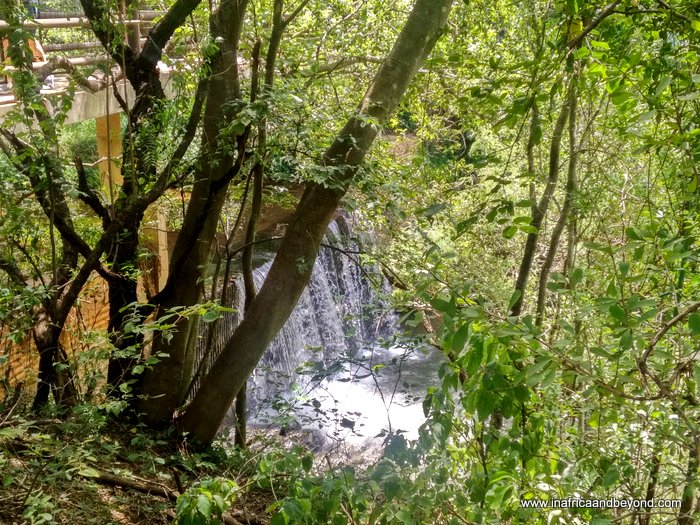 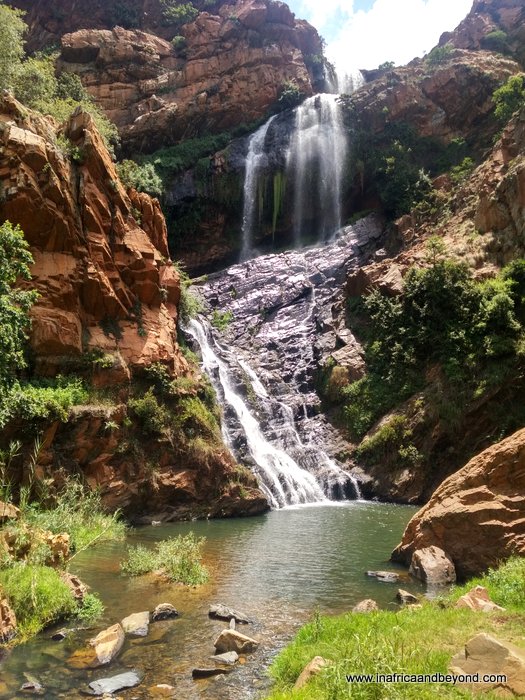 I subsequently visited the Falls for a hike and later, on a tour with Joburg Tourism when we did a guided tour and got to see Verreaux’s Eagles.

Have you been to the Walter Sisulu Botanical Garden ?

4 comments on “Walter Sisulu Botanical Garden : Things to do in Johannesburg”