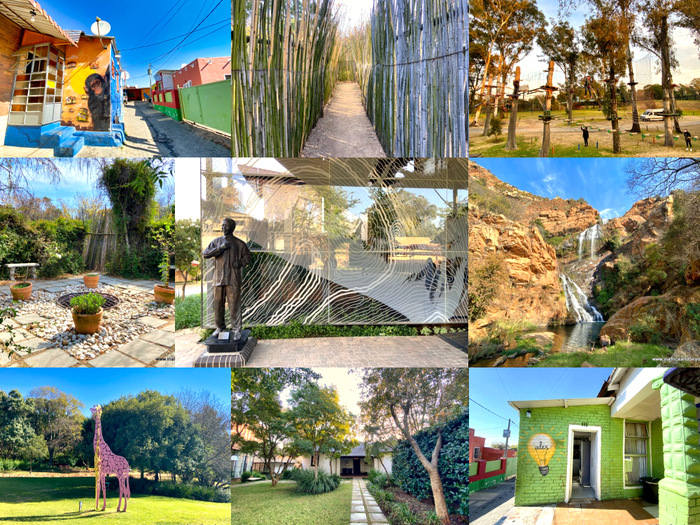 I was recently invited to explore some lesser-known things to do in Johannesburg with Joburg Tourism and a few other bloggers. It had been a while since I had last done a Joburg tour and I was even more eager to do it, because apart from the Walter Sisulu Botanical Gardens, the other Johannesburg attractions on the itinerary were places that I’d heard about but never visited before, even though I’ve spent nearly all of my life in Joburg. Until it actually happened, I was afraid that it would get cancelled because of the third wave, but fortunately it wasn’t. Most of the places we visited were outdoors and our small group wore masks throughout the tour.

Here are the Johannesburg attractions we visited: 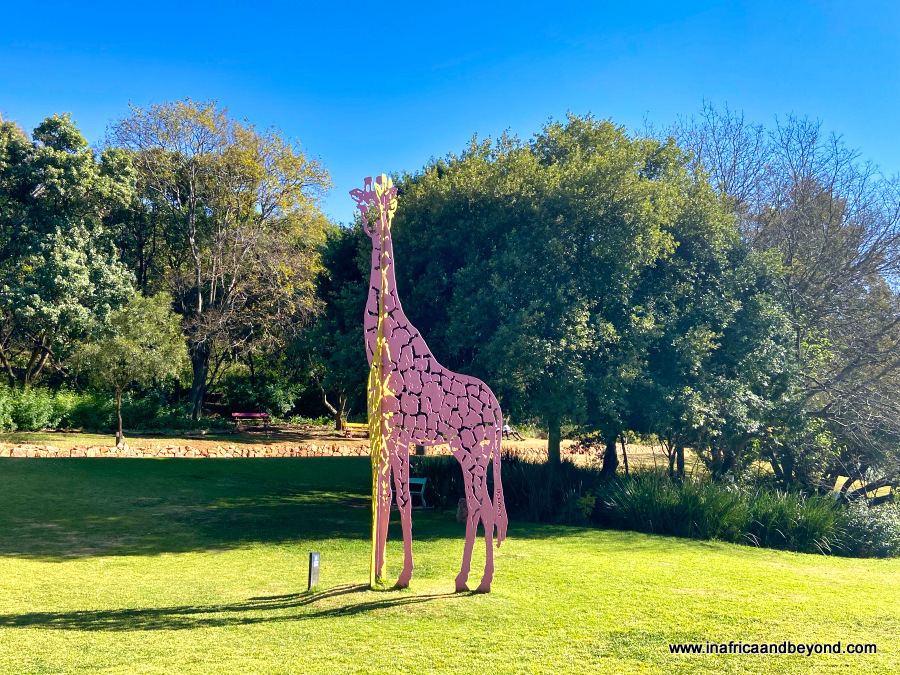 The Wilds had been on my Joburg bucket list ever since we started hiking, but somehow we never got down to visiting it, so I was pleased to see that it was our first stop. It’s a beautiful 16 ha nature reserve between Killarney and Houghton dotted with water features, winding stone paths, pretty benches and colourful laser-cut wildlife structures by artist James Delaney.  A pedestrian bridge over Houghton Drive connects the two sides of The Wilds and there are great views of Joburg from the highest points of the reserve. We explored a small section of the huge park but I plan to go back again to see the rest of it. 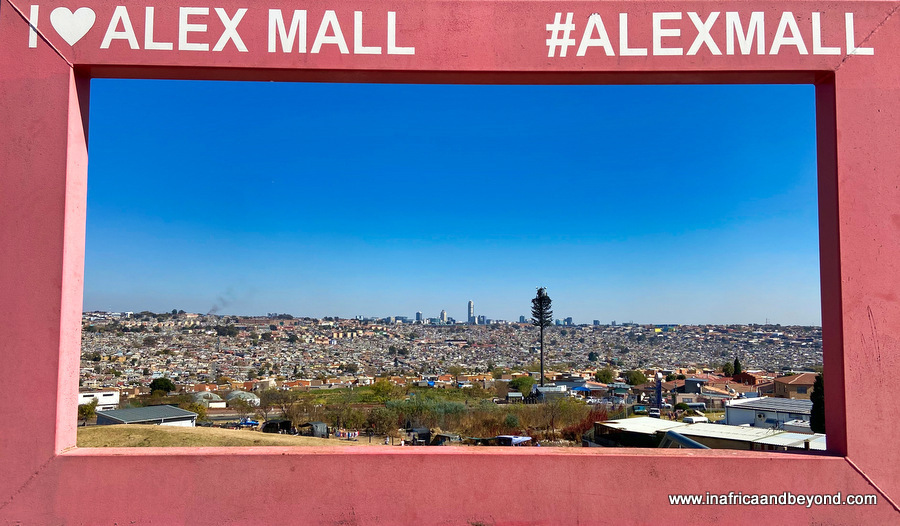 View of Alexandra from Alex Mall

Alexandra (Alex) is Johannesburg’s oldest township, and there is no better way is there to see it than through the eyes of locals who are passionate about it. We met Harry Nakeng and Siphiwe Ngwenya from Maboneng Township Arts Experience at Alex Mall.After pointing out the best views of Alex to us from there, they proceeded to show us some other key places in the township like Nelson Mandela’s former home, the Art Affair Gallery and the street which is home to the Maboneng Township Arts Experience. Read more about our tour of Alexandra. 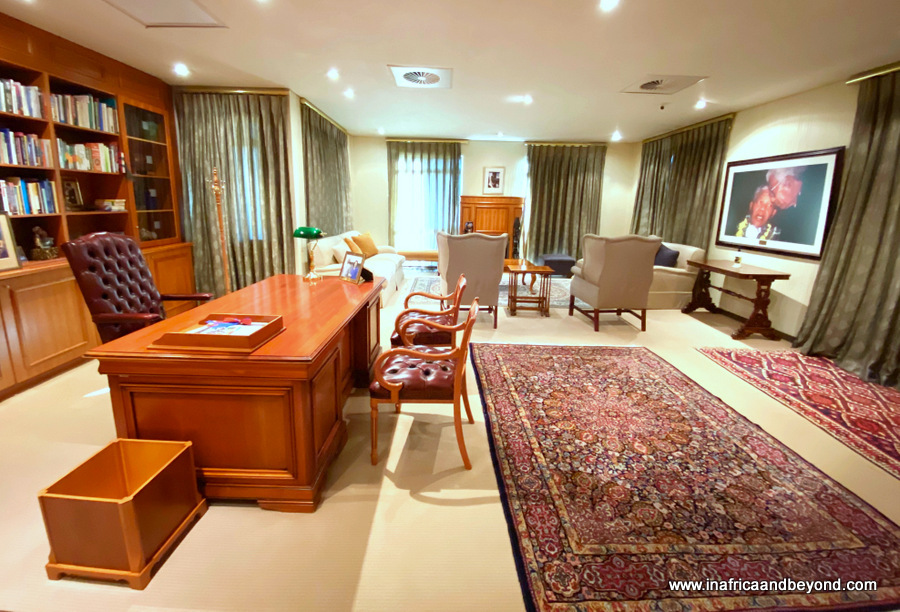 The Nelson Mandela Centre of Memory in Houghton is home to Madiba's post-presidential office which has been preserved as he left it when he was last in the building. It also houses a state-of-the-art archive and exhibition spaces, where you can see replicas of important items in Madiba's life, letters and speeches he wrote and other memorabilia. I got goosebumps just looking at them. It's a great reminder of Madiba’s legacy. 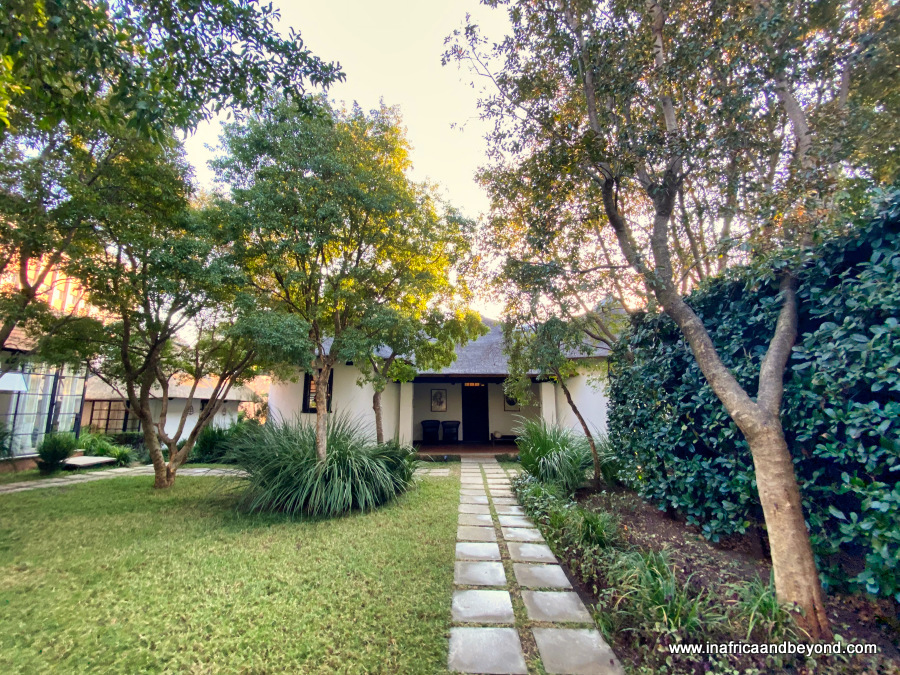 Satyagraha House was home to Mahatma Gandhi from 1908 to 1909. This is where he developed his philosophy of satyagraha (a form of passive resistance which he used to lead India to independence) and fought against discrimination in South Africa. After years of private ownership, the house was re-opened as a museum and seven-bed guest house in 2011.

The museum focuses on Gandhi’s life in South Africa, especially the time he spent in this house. True to his style, the guesthouse is designed in neutral colours and simple décor, and the rooms have charpoys (traditional beds woven with a rope framework) in addition to the main beds. Only vegetarian food is served, and meditation and yoga introductory lessons are offered. 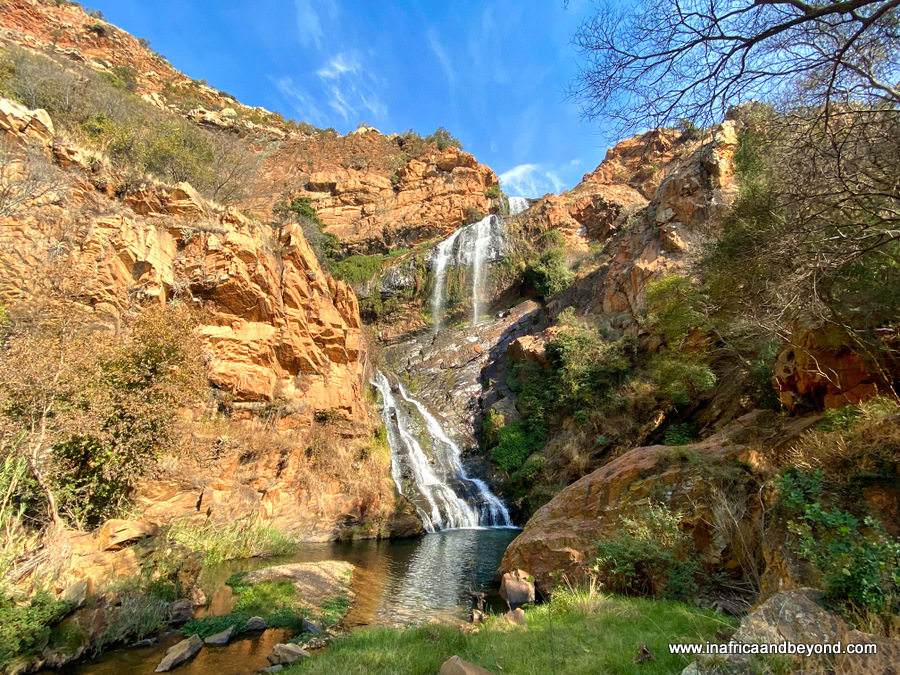 Although I’d been to Walter Sisulu Botanical Gardens several times before, on this occasion we did a guided tour and I saw parts of the garden that I hadn’t noticed before. I was surprised that the gardens were so busy on a weekday but then we realized that it was Tuesday, which is when pensioners get free entry, hence the crowds. 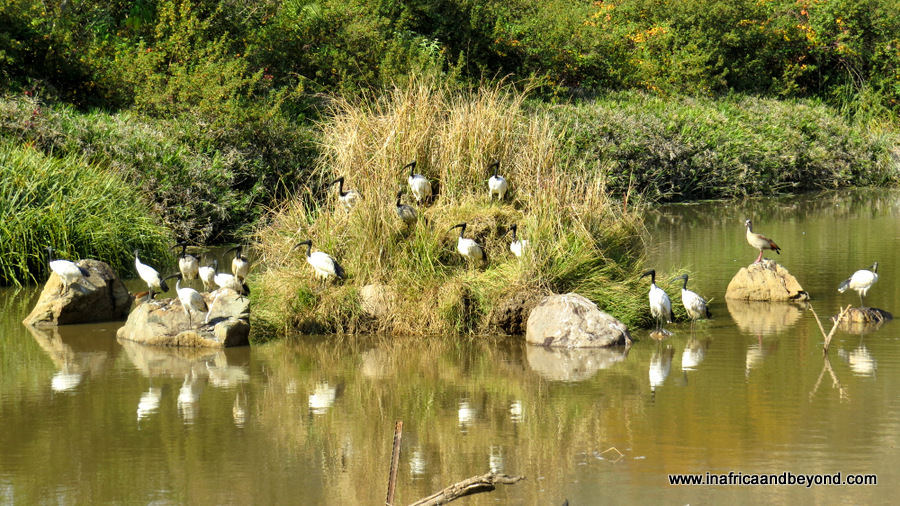 Our guide pointed out some of the signature garden areas, like the water-wise garden, the succulent rockery and the bird hide from where we saw a flock of sacred ibis on an island in the water. We also got to see one of the resident Verraux’s Eagles being pursued by crows. The eagles had recently built a new nest which contained chicks.

Interesting Fact: Since the 1940’s, there has always been a pair of Verraux’s Eagles nesting on the cliffs at the falls. 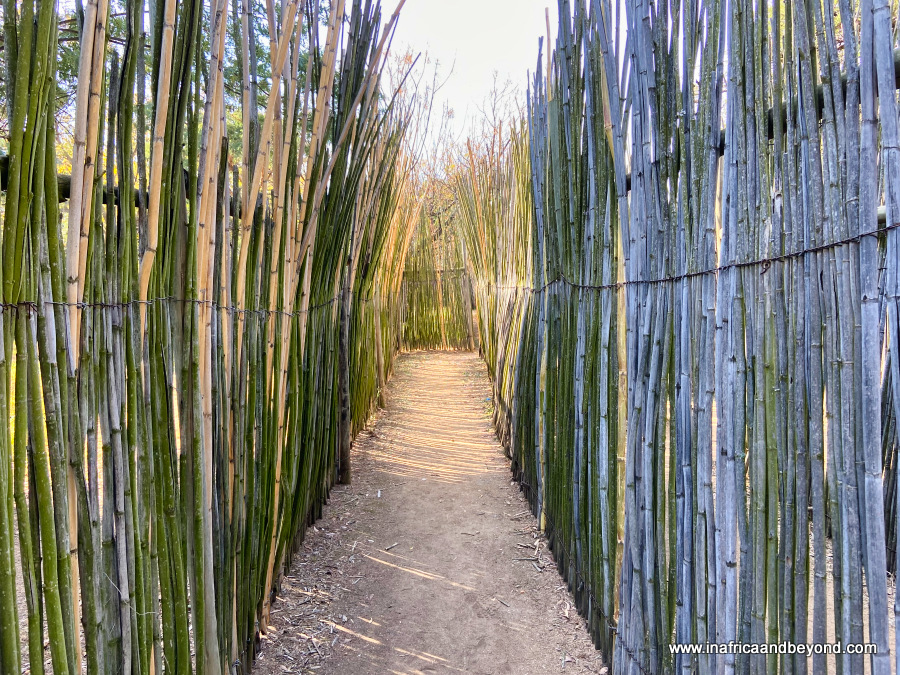 Honeydew Mazes is a great place for a family, friends, or teambuilding outing.  They have a giant elemental maze made out of reeds and smaller mazes for young kids. In summer, they also have a maize maze. We took on the elemental maze. 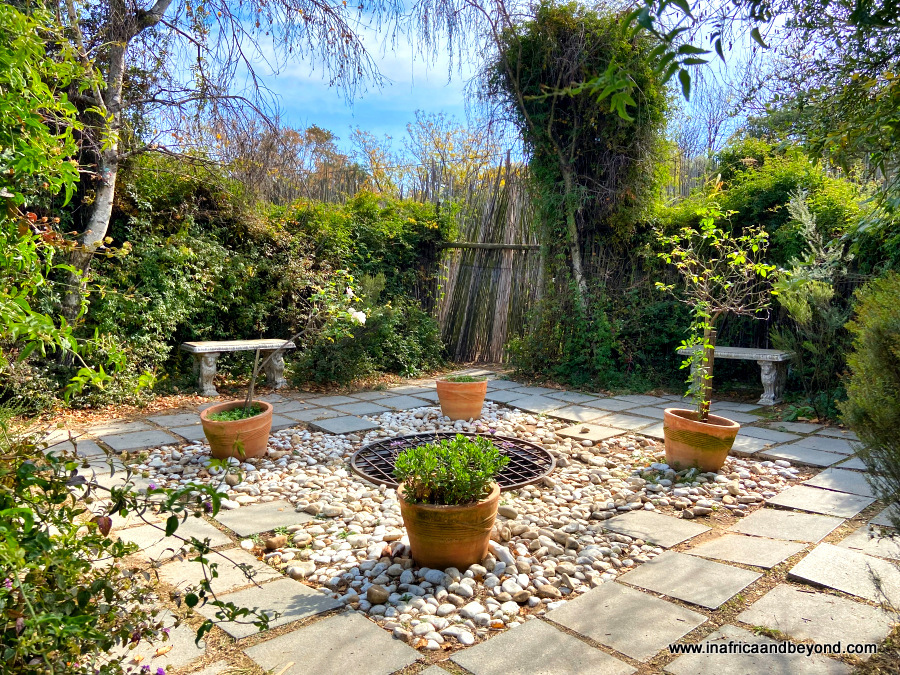 Participants are separated into teams and given 90 minutes to navigate the maze, however this consists of more than just finding the exit. Teams are given a clipboard with riddles, which they have to answer by going through the maze and finding the randomly placed clues, as well as completing the tasks in the pretty secret gardens. It was so much fun, and I made a mental note to go back again with my family. 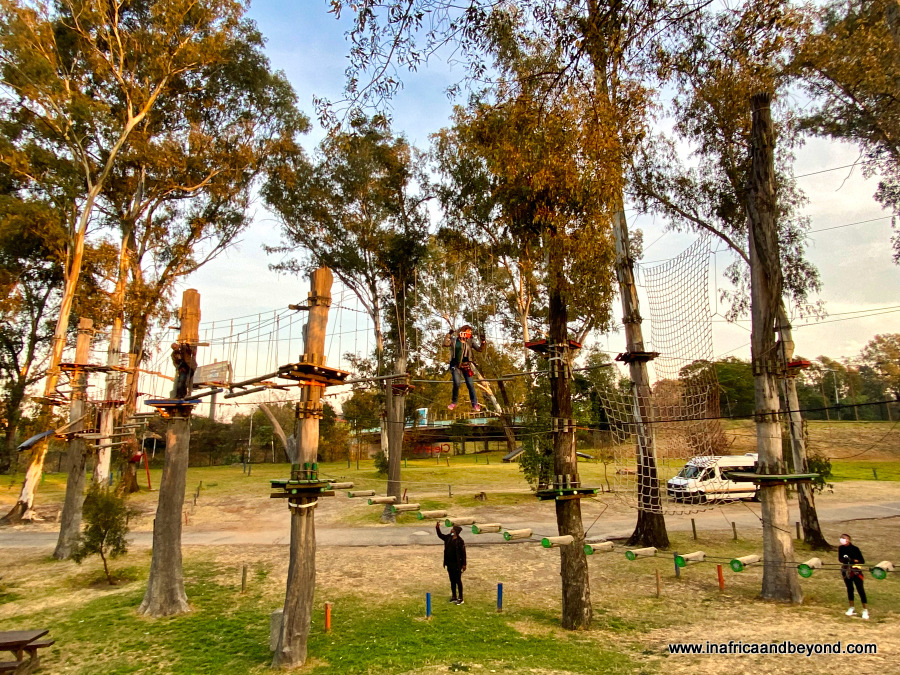 Acrobranch is a must for adrenalin junkies. Although they have branches around the country, the one we visited in Melrose is the first and oldest one.  Set in the James and Ethel Gray Park in Melrose, it is an aerial adventure consisting of zip lines, tightropes, ladders, swing bridges and other obstacles which take you from tree to tree. Your balance, strength and endurance will be seriously tested. There are different levels of courses, and the guides are on hand to assist when required.

It was an enjoyable two days re-discovering Joburg in great company, and I’m glad I went. Thank you Joburg Tourism!

Which of these Johannesburg attractions would you like to visit? 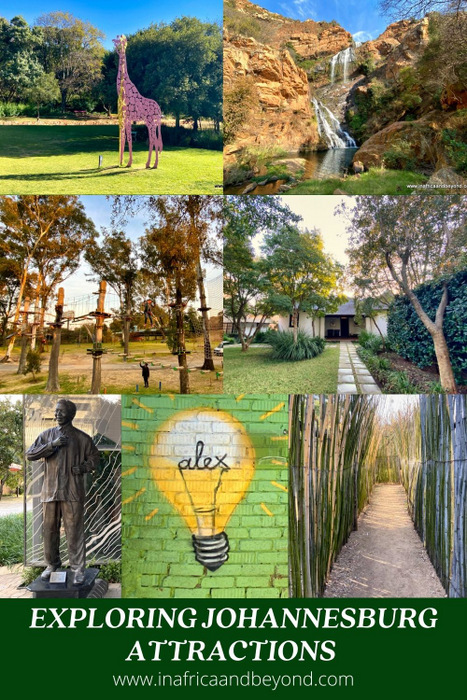