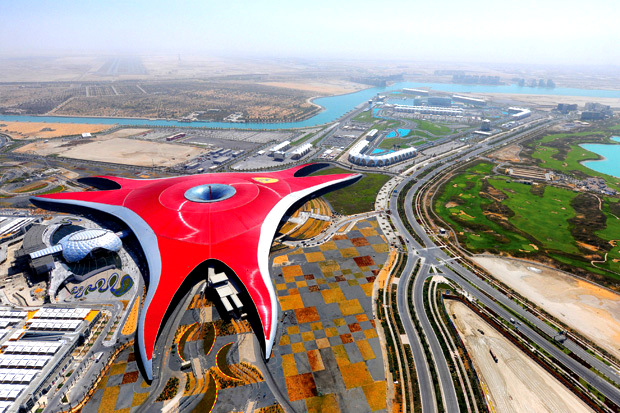 A few years ago, an acquaintance and I were talking about our travels. She had been telling me about her visit to Ferrari World. I mentioned that I hadn’t been there. Knowing that I had travelled a fair amount, she exclaimed, rather shocked, “You haven’t been to Ferrari World?”. Since then, it had been on my ever-growing bucket list. In fact, it was on my entire family’s bucket list.

We finally made it there on our recent trip to Abu Dhabi in the UAE. As it was December, the bright red Ferrari World was in full festive mode with artificial snow, an ice rink, Christmas trees and other decorations. Flexible acrobats entertained guests at the entrance, and posed for photos with them. Most other staff members wore red uniforms with the ubiquitous Ferrari logo. 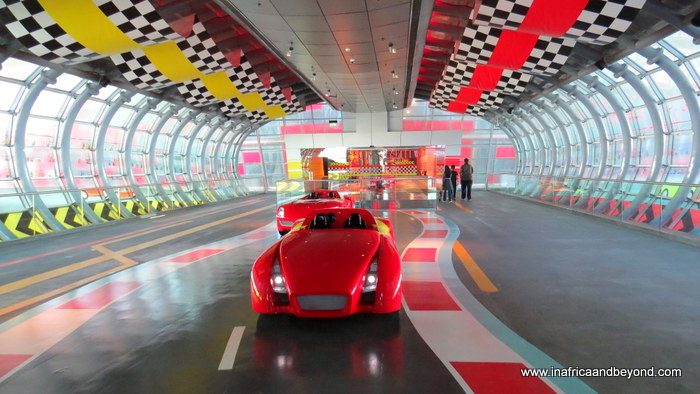 Until recently Ferrari World was the world’s largest indoor theme park.  It is also the world’s first Ferrari themed park and home to two record breaking rides, Formula Rossa and Flying Aces. Formula Rossa is the fastest roller coaster in the world and will blast you to an incredible speed of 240km/h in 4.9 seconds. Flying Aces, will take you through the worlds highest inverted loop, while travelling at speeds of up to 120km/h.

Although I am not the bravest of thrill riders, I knew that riding the world’s fastest roller coaster was something I had to do. My husband and kids, on the other hand, are adrenalin junkies who love exciting rides. The faster the ride, the better. Therefore, we headed directly for Formula Rossa on entering the theme park. My trepidation was reduced slightly when I saw returning riders applauding. We climbed into the cars, and buckled in. Then we took off like bullets. I must admit I kept my eyes closed most of the time although I could feel the wind and speed pulling my cheeks apart. 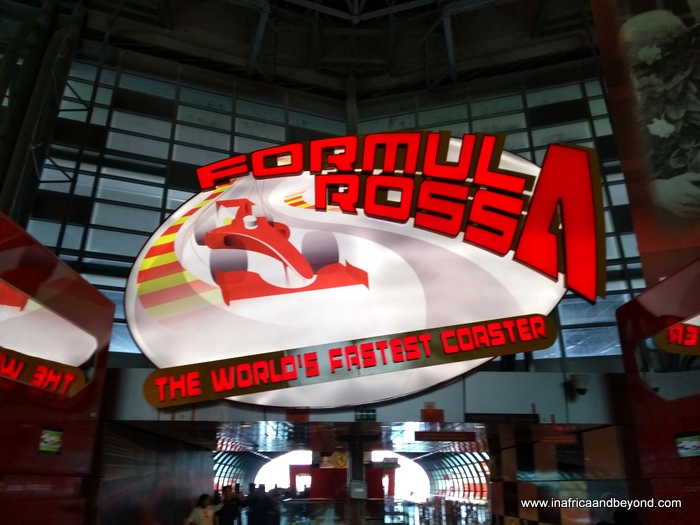 Exhilarated, we headed off for the second most popular ride at Ferrari World, Flying Aces. We were suspended, thrown about, turned upside down, twisted and shaken. Flying through the worlds highest inverted loop at high speed made my stomach churn more than Formula Rossa and I needed a break before tackling the next high speed ride. 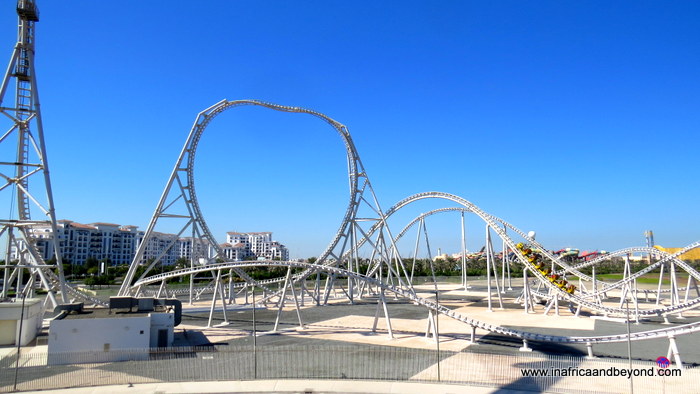 Once we had enjoyed a break, we headed for Turbo Track. This short but heart-pounding ride opened in 2017. It took us through the red roof of Ferrari World to the highest point on Yas Island at 64 metres, then dropped us downwards, while twisting and spiralling.

In the Fiorano GT Challenge, we went on a high speed race with another GT Coaster. This was fun too. 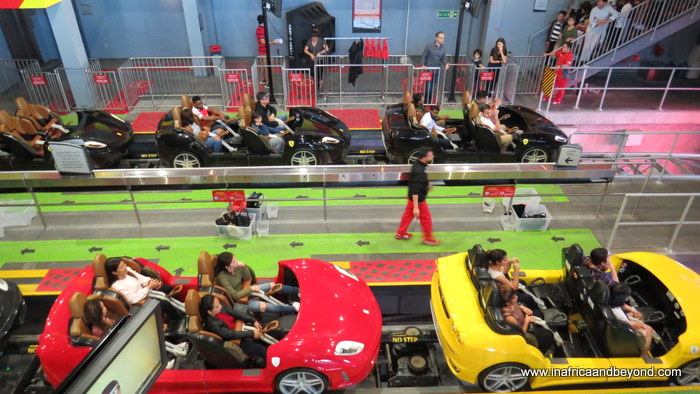 After all this excitement on the fast rides, it was time for some family rides and attractions. Here are some of those we enjoyed.

This ride was similar to “Soaring” at Epcot, in Walt Disney World. We flew over picturesque places in Italy as a Ferrari drove down below.

We sat in vintage cars and took a leisurely drive through Italy’s beautiful roads.

This world-class ice-skating show featured champion ice skaters in a medley of fairy tales. We were impressed, to say the least. 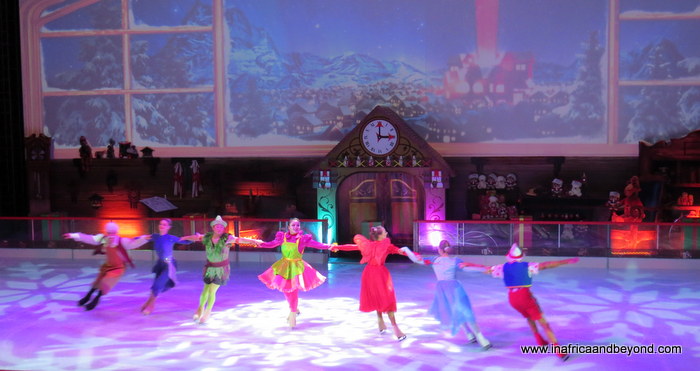 There were several entertaining 4D shows playing and we went to all of them. 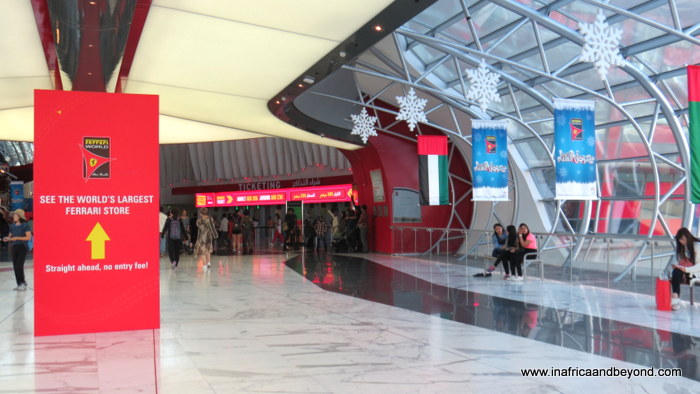 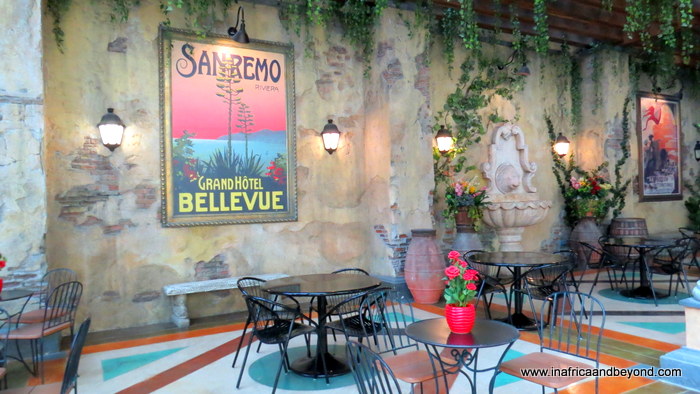 Who should go to Ferrari World

If you are visiting the UAE, then a visit to Abu Dhabi including Ferrari World is a must. We had loads of fun there, and can now add Ferrari World to the list of best theme parks we’ve ever visited.

Do you enjoy visiting theme parks?