How to see the best of Barcelona in one day

“Barcelona is a very old city in which you can feel the weight of history; it is haunted by history. You cannot walk around it without perceiving it.” Carlos Ruiz Zafon

Before I go any further, let me emphasise that I do not recommend going to Barcelona for only one day. Rather I would suggest 3- 4 days based on your interests. But if one day is all you have - like I did - then this is how you can get an overview of the city and see the major attractions of Barcelona in one day.

Barcelona was our first stop in a whirlwind visit to eight cities in three countries. Spain’s second largest city and the capital of its Catalunya (Catalonia) province, Barcelona is best known for its eccentric Gaudi architecture, its football team, the 1992 Summer Olympics it hosted, and its fight for independence. However, there is much more to it than that.

The city was founded circa 10 BC by the Iberians. It started off as a colony called Barcino. The oldest surviving remains of human settlements found here date back to 5000 BC. Subsequently, it was ruled by the Romans, the Visigoths, the Moors and the Franks until it became part of Catalonia, and then Spain.

Barcelona is a charming, cosmopolitan city with magnificent architecture. Many famous artists have their roots here. Pablo Picasso lived here as a teenager, Joan Miro was born here and Salvador Dalí was born nearby.

Today, more than 23 million people visit Barcelona every year, including three million cruisers. Yes, Barcelona is the biggest cruise port in the Mediterranean. It also has a whopping 9 UNESCO World Heritage sites. In fact, Barcelona is so popular that it has a problem with overtourism, especially during Easter and the peak summer months (May to September). We visited in winter. At this time of the year, the crowds recede and the weather is colder, but manageable . 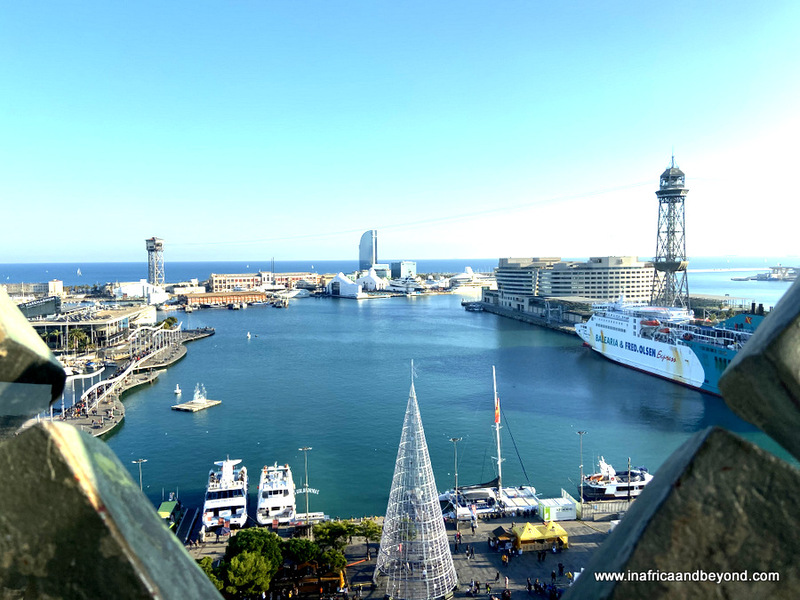 So how do you see vibrant, historic, beautiful Barcelona in one day ? The short answer is…take the Barcelona Bus Turistic, Barcelona’s hop-on hop-off bus. Although, it is blue and has a different name, it is part of the world-wide City Sightseeing red bus franchise. You may not be able to visit every attraction listed here but you will get a good overview of the city with the bus. It has two routes that cover the Northern and Southern parts of the city. In summer there is a third route that will take you along the Mediterranean coastline too.

Barcelona in one day

Here are 12 attractions you can visit in Barcelona in one day with the Bus Turistico. We visited some of them, and added others to our wish list for our next visit. 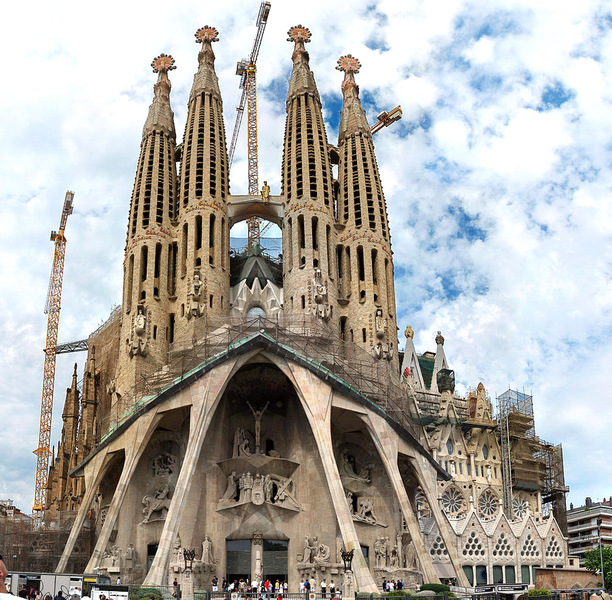 The Basílica de la Sagrada Família, also known as the Sagrada Família, was Antoni Gaudi’s dream. If you haven’t heard of Gaudi before, he was a Catalan architect known for his modernist art inspired by nature. Construction of the basilica began in 1882 and is still not complete. Now funded by contributors and tourists, it is scheduled to be completed in 2026, Gaudi’s death centenary. The basilica looks even more impressive upfront than in pictures.

Google pictures of Barcelona City and the first pictures you’re likely to see are those of the Sagrada Familia and Park Guell. This placed both of these sites at the top of my Barcelona list. The park was initially planned to be a residential garden city designed by Gaudi. The project was abandoned due to lack of buyers, but not before Gaudi had done some work there already. To be honest, I was expecting more, having seen it so often in photos on social media. However, you will see a few Gaudi structures and it is still a good location for those unique Barcelona Instagram selfies.

Entrance to the Monumental Zone, where the Gaudi structures are, requires a ticket which has to be booked in advance. 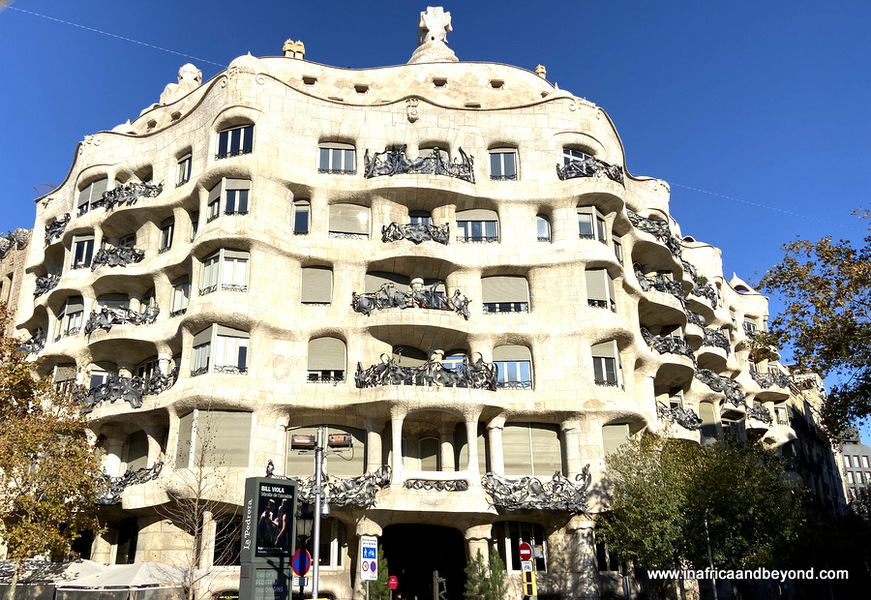 Continuing the Gaudi theme, these are two buildings designed by Gaudi in his characteristic style. You can do guided tours inside the buildings. 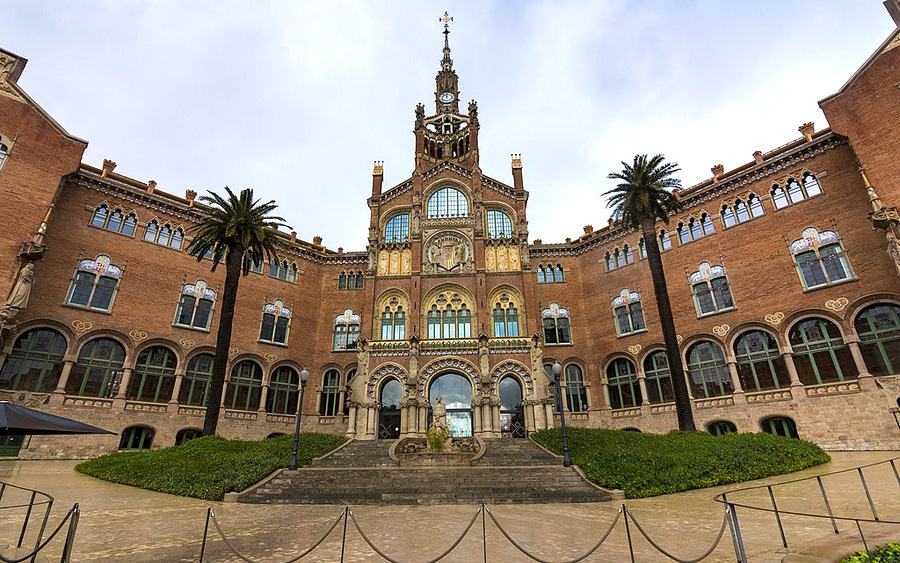 This may seem like an unusual attraction as hospitals don’t normally feature on “Top Attractions” lists. However, this one is unique. A functional hospital until 2009, it is an attractive Modernista landmark considered to be Europe’s foremost art nouveau complex. With medieval exteriors and grand interiors, it is worth a visit. Guided tours are available.

5. Plaça d’Espanya and the Magic Fountains of Montjuic

Plaça d’Españya is a large square where many of the city’s main roads intersect. Here you will see the two towering Venetian towers inspired by the Campaniles in Venice  and a former bullring , which has been converted into a shopping centre,  Arenas de Barcelona. You can visit the roof terrace of the former bullring with the outdoor panoramic lift , from where you will get sweeping views of Barcelona.

A huge fountain rises up in the centre of the Plaça. This is where the magical fountains are held several times a week. A spectacular explosion of light, color, sound and water aerobics lasting around 30 minutes, it is a must do. I was dead tired from the 18 hour journey to Barcelona but that didn’t prevent me from going there on my first night in the city, and I'm glad I did. I was mesmerised, and my kids loved it too. -  See the schedule here. 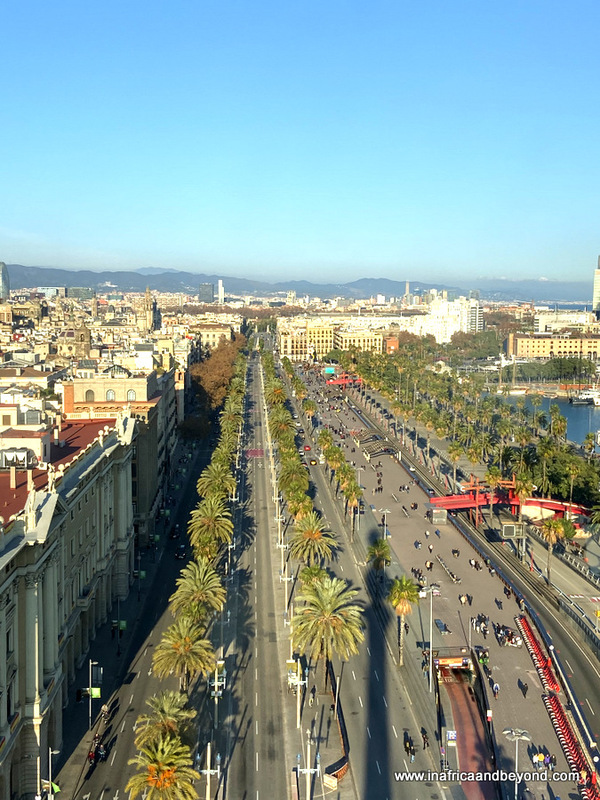 The Columbus Monument was opened in 1888 as a tribute to Christopher Columbus, who disembarked in the port of Barcelona after he returned from America. Looking at it from the outside, you wouldn't know that it would be possible to go to the top of the tower but it is. We went up 60 floors in a small lift accessible from the basement. At the top , there are great views of La Ramblas, the waterfront and other parts of the city. 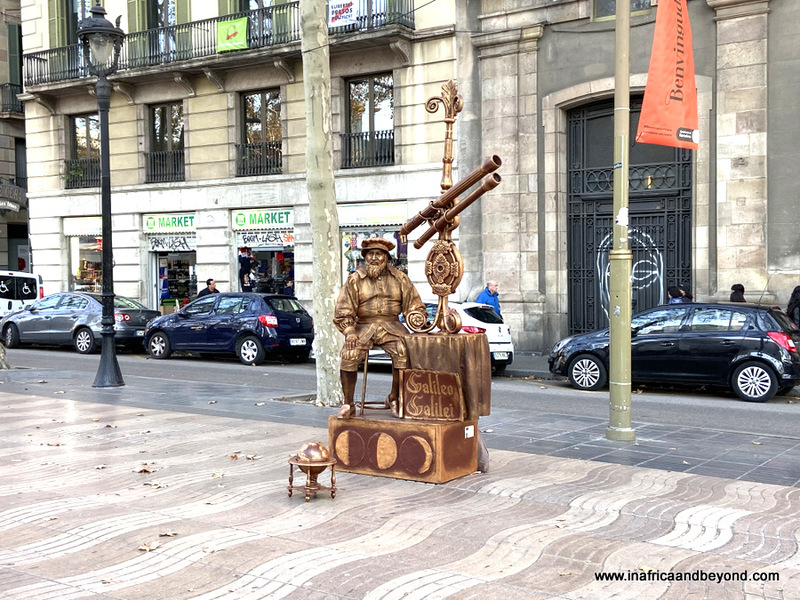 This is a vibrant boulevard flanked by shops, restaurants and markets. On this pedestrian street, you will see live performances, artists who will draw your portrait and street entertainers who look like statues - until you give them some money – and then the fun begins. La Boqueria, Barcelona's iconic produce market also has an entrance on this street.

Tip: Prices on Las Ramblas are aimed at tourists, so it would be better to shop and eat elsewhere. 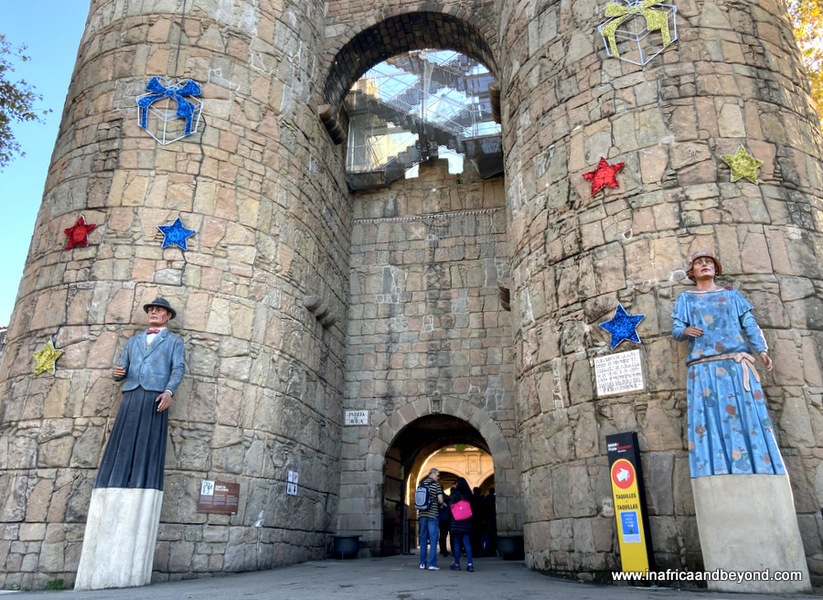 This is a huge open air museum, designed like a village, which showcases Spanish architecture, as well as arts and crafts from all over Spain in the same location. 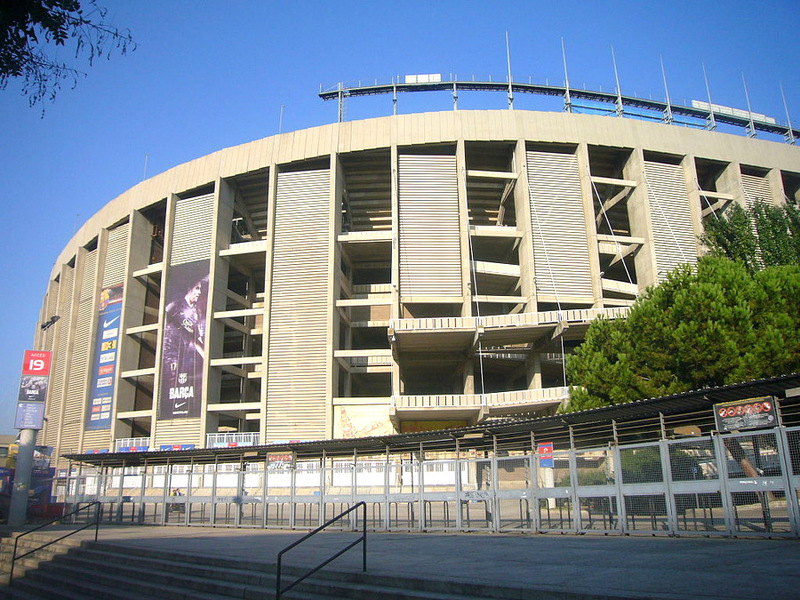 Europe’s largest stadium, this has been the home stadium of the popular FC Barcelona football team since it was completed in 1957. You can watch a match here or get a guided tour. 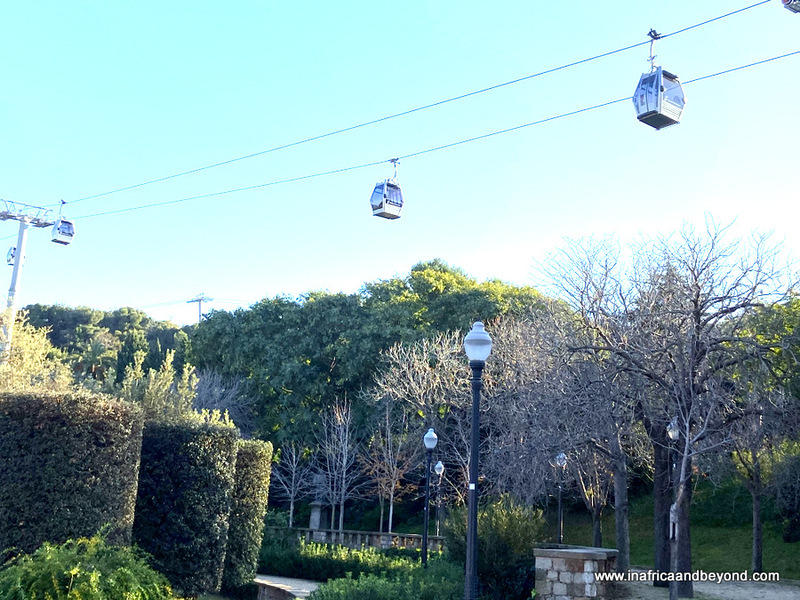 This is a great way to get a bird’s eye view of the city’s green areas and harbour. The journey culminates on the hill near Montjüic Castle. 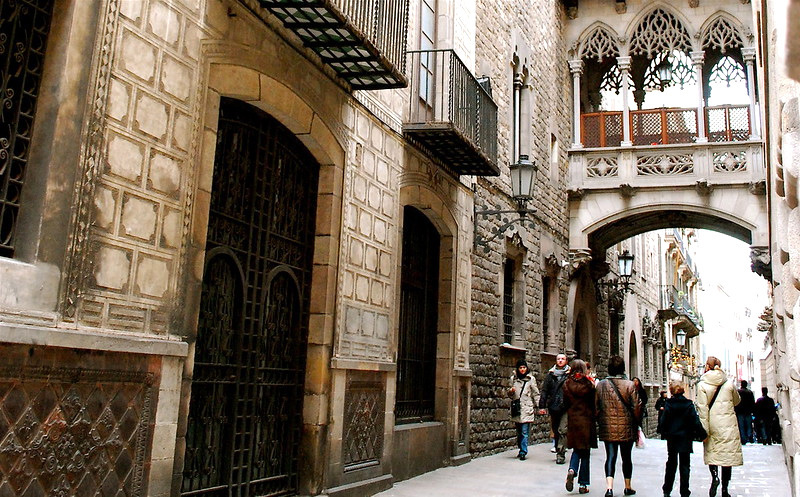 This is one of the world’s best preserved medieval districts. Barcelona has its origins in this area which was built on the site of the former Roman colony. You can still see some of the ancient ruins at the Museum of History. The narrow medieval are interspersed with historic attractions. 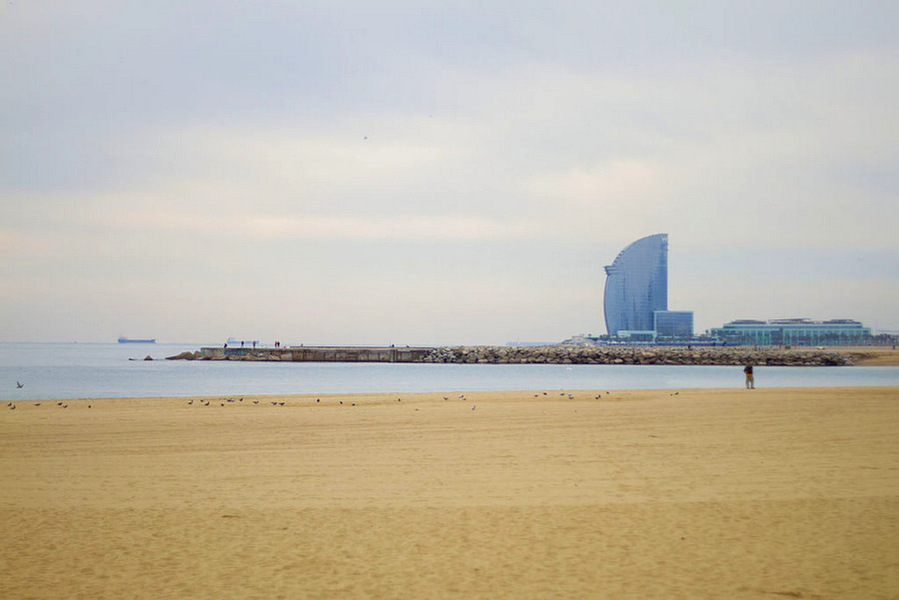 Barcelona’s beachfront was built for the 1992 Summer Olympics. Today, the city boasts nine beaches over a 4km stretch. The bustling beaches are very popular and can be found close to the city centre.

These are just some of the things to see in Barcelona. The city was welcoming, friendly, and ideal for a family vacation. Our only regret was not having more time there.

About the Bus Turistic

The Bus Turistic offers informative commentary in 16 languages. Tickets include discount vouchers to major Barcelona attractions. The buses start at Placa de Catalunya, one of the city's main squares. We found them very punctual. If we missed a bus, there was usually another one within 10 minutes. There is free wi-fi on board.

How to get around Barcelona

Barcelona has an efficient public transport system. If you plan on using it often, then buy a T10 ticket which is valid for 10 trips, across different types of public transport (train, bus, metro). If you’re travelling as a family, like us, one T10 ticket can be used for multiple people.

Tip: To prepare for your visit, I recommend reading Rick Steves' Barcelona guide.

“Allow me to state here how much I love Barcelona , an admirable city, a city full of life, intense, a port open to the past and future.” – Le Corbusier

Do you have any tips on how to see Barcelona in one day ?

Book your activities in Barcelona.

See things to do in Madrid. 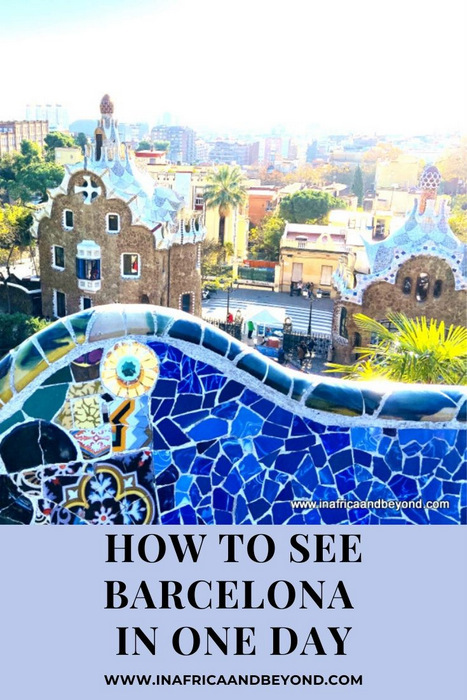