12 Best Things to do in Madrid 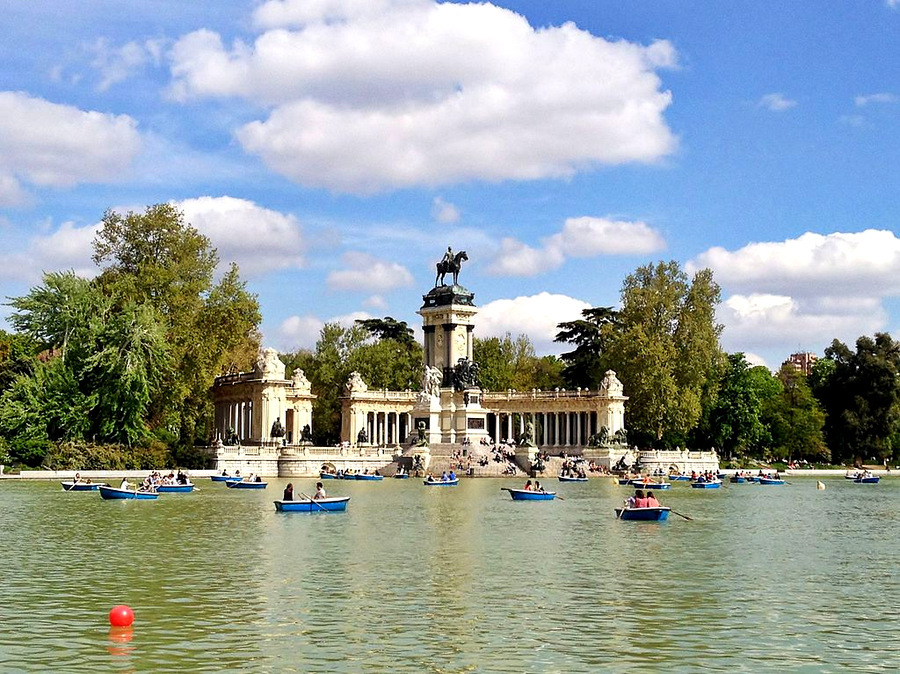 The Best Things to do in Madrid

Madrid, is often seen only as a gateway to other parts of the country. We found it to be a beautiful city in its own right, full of architectural wonders like grand palaces, magnificent monuments, tree-lined boulevards, charming fountains and unique green spaces. A family-friendly city, there are so many things to do in Madrid with kids . However, the attractions below are not specific to children and should be visited even if you are not traveling with children. I would recommend at least two full days here.

The capital of Spain since the 16th century, it is a delightful fusion of old and new. Here you can see historic neighbourhoods and modern skyscrapers, cobblestone alleys and modern tree-lined boulevards. Although evidence of pre-historic occupation was discovered, Madrid was only officially founded by the Emir Muhammad I of Cordoba in the 9th century. He built a fortress there to protect the capital, Toledo. Eventually, Madrid replaced Toledo as the Spanish capital in 1561. Miguel de Cervantes of Don Quixote fame was born nearby and died in Madrid in 1616. 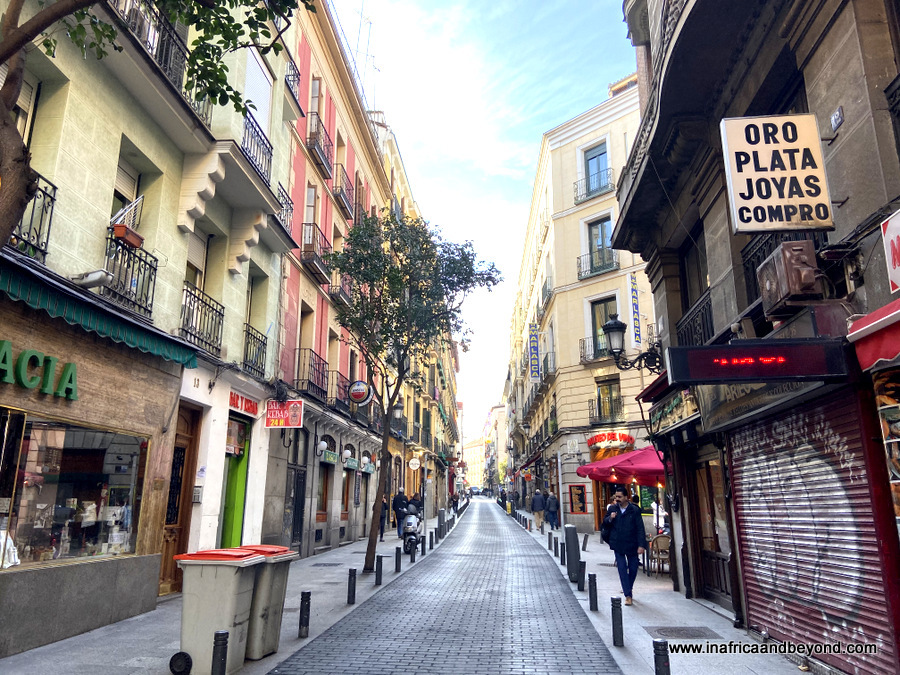 We took the high-speed Renfe train from Barcelona to Madrid which took just under 3 hours. However, you can also fly there and travel from Madrid airport to the city centre. Located in the heart of Spain, Madrid is a good base for day trips. Toledo is an hour away by bus while Zaragova is just over an hour away by high-speed train. We visited Toledo for the day. If we had more time there, we would have loved to go and see the attractions in Zaragova and those in Segovia too.

According to the European Green City Index, Madrid is one of Europe’s greenest capital cities. The day we arrived there was a public holiday because the UN Climate Change Conference was in progress and the city was buzzing. The crowds became denser as the day wore on. Festive lights decked the plazas and the streets as evening approached. There was so much to see and do that we had to plan our time carefully. 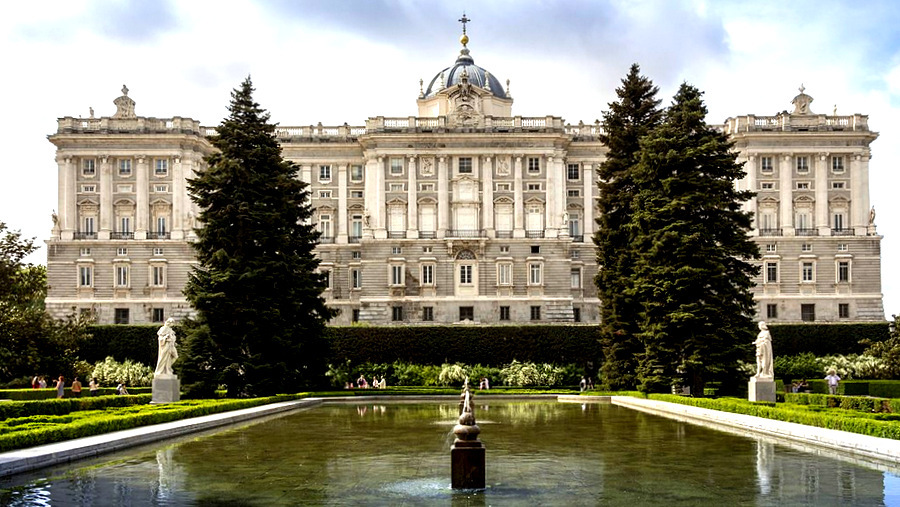 As the name suggests, this is the official residence of Spain’s royal family, although it is now only used for state ceremonies. The king and queen live in Zarzuela palace just outside Madrid. With over 3400 rooms and sprawling gardens, the Palacio Real is believed to be the largest palace in Europe. It can be visited as a museum everyday except when state ceremonies are being held. The palace still contains most of its original striking furniture. Do visit the exquisite neoclassical-style Sabatini gardens on the northern side of the palace, too.

2. Indulge your inner artist at some of the worlds top art galleries 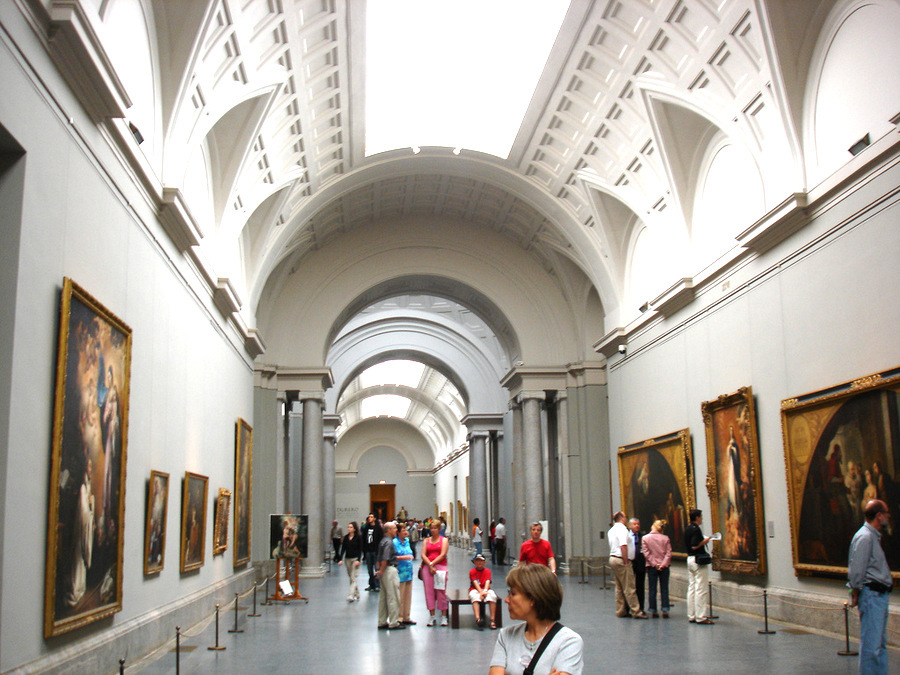 Madrid is home to three of the worlds top art galleries - the Prado, Reina Sofia and Thyssen Bornemissza, which can all be found on the Art Walk – which spans approximately one and a half kilometres of green space. You will be able to see artworks by some of the worlds most renowned artists here. A large portion of the art at Prado comes from Spain’s royal collections and includes works by Spain’s ‘big three’ – Francisco Goya, El Greco, and Diego Velázquez. Reina Sofia has a fascinating contemporary art collection including the Picasso masterpiece, Guernica, and Thyssen Bornemissza is home to some great Renaissance artworks. 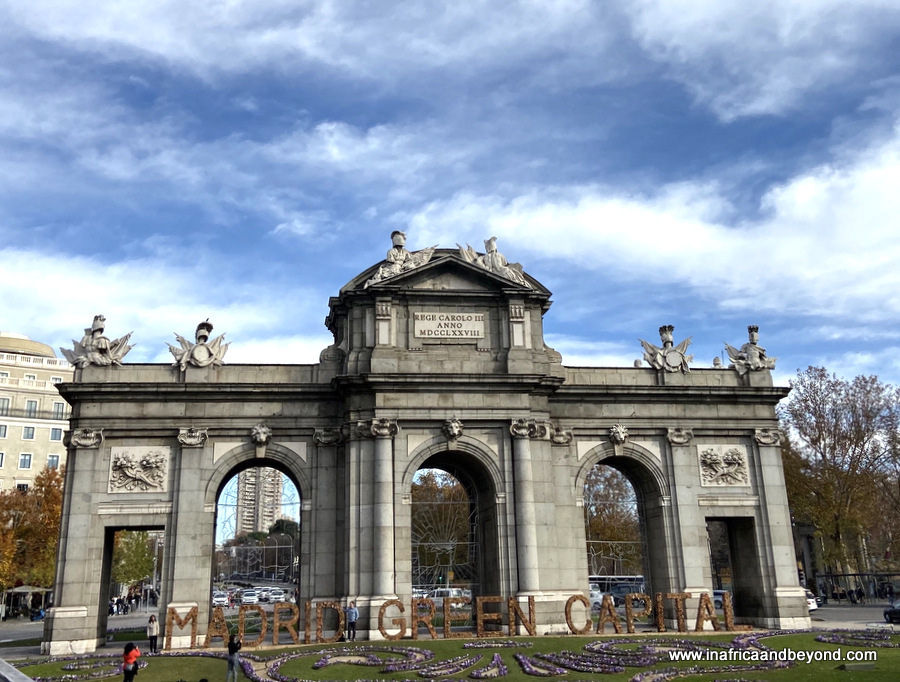 Once upon a time, Madrid used to be a walled city with five entrances used to receive visitors. Built in 1778, the Puerta de Alcalá was one of them. The walls have fallen but the gate remains as an impressive monument surrounded by a small garden. If you look carefully, you will be able to see “scars” caused by bullet and shrapnel damage during the Spanish Civil War.

This historic park is an oasis in the centre of Madrid. Originally created as a sanctuary for the Royal Family, it was opened to the public in the late 1700s. The park has a boating lake, stunning gardens including a circular rose garden, the iconic Crystal Palace observatory and the Velazquez palace, where exhibitions are held.

5. Go on a tour of Real Madrid’s home stadium - the Santiago Bernabéu Stadium 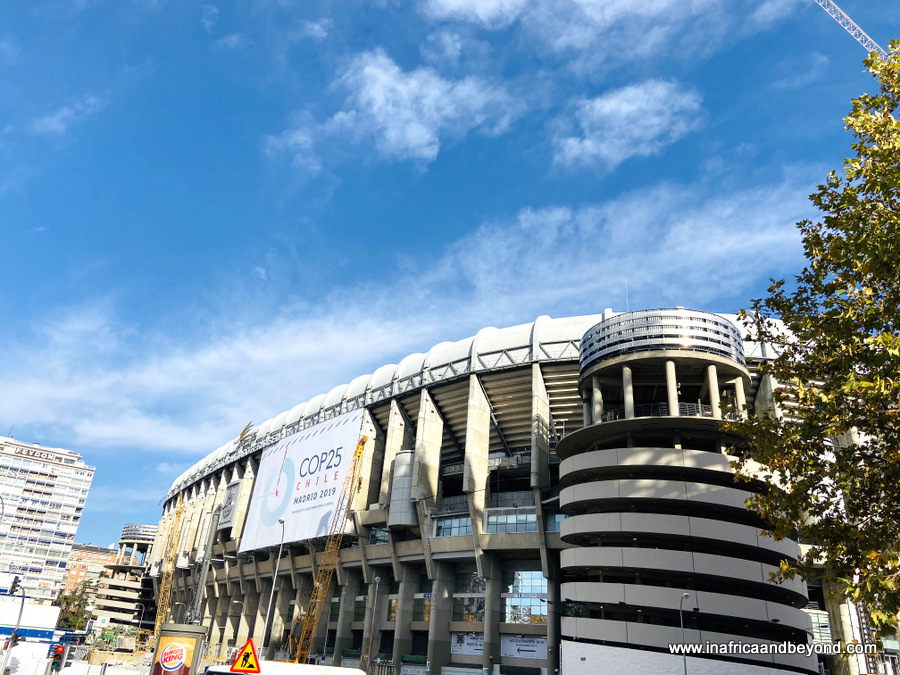 This one is for the football fans . The Santiago Bernabéu Stadium has been the home stadium of the popular Real Madrid football team since 1947. The final of the European Cup/EUFA Champion’s League was held here four times! You can get a guided tour of the stadium. It is currently undergoing renovations which will make it the best stadium in the world. The upgrade is planned to be completed in 2023.

6. See some of Madrid’s most famous icons at Puerta del Sol 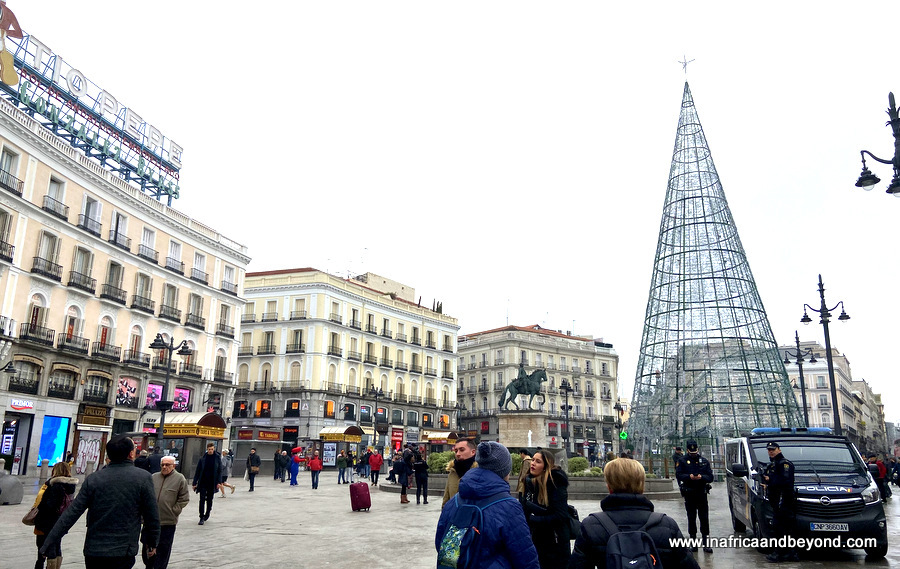 This is the most famous and central square in Madrid. It was the first place we headed to when we arrived in the city. Three of Madrid’s best-known icons can be found here:

Kilometre 0 – A stone slab which marks the point from where all the major radial roads in Spain start.

The Statue of the Bear and Strawberry Tree – which represents Madrid’s coat of arms.

Clock of the Puerta del Sol – for over a century now, people across Spain welcome the New Year by eating twelve grapes to the chimes of this clock. 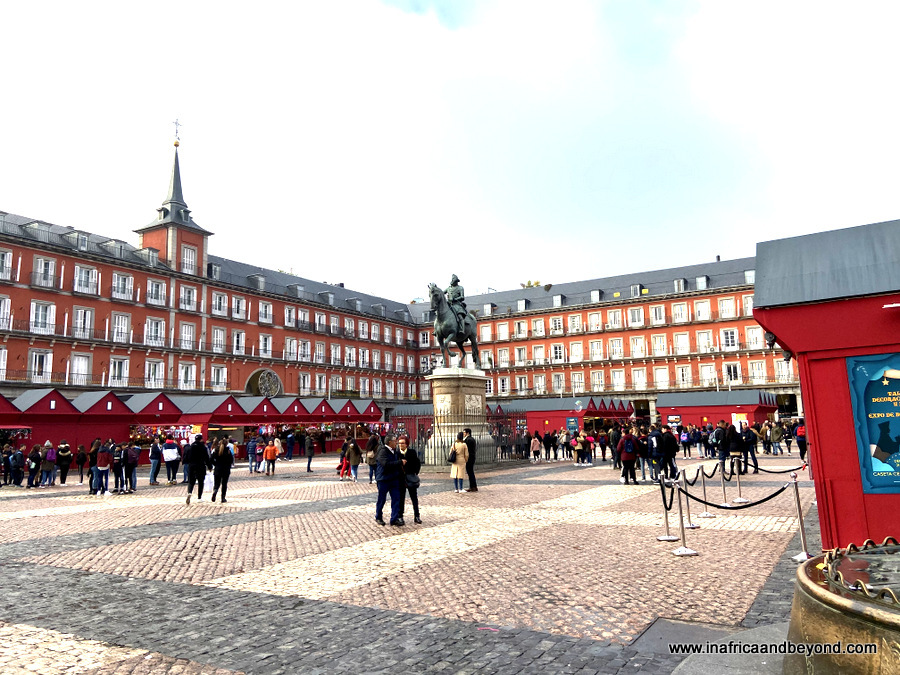 Did you know that the people of Madrid are called Madrileños? Close to Puerta del Sol, Plaza Mayor is another popular square in Madrid . It is surrounded by magnificent buildings with balconies facing the centre. In the past, this plaza was the venue for bullfights, executions, football matches and national celebrations. Today the plaza is home to sidewalk cafes, restaurants and Madrid’s Tourism office.

8.     Discover a part of ancient Egypt at the Templo de Debod 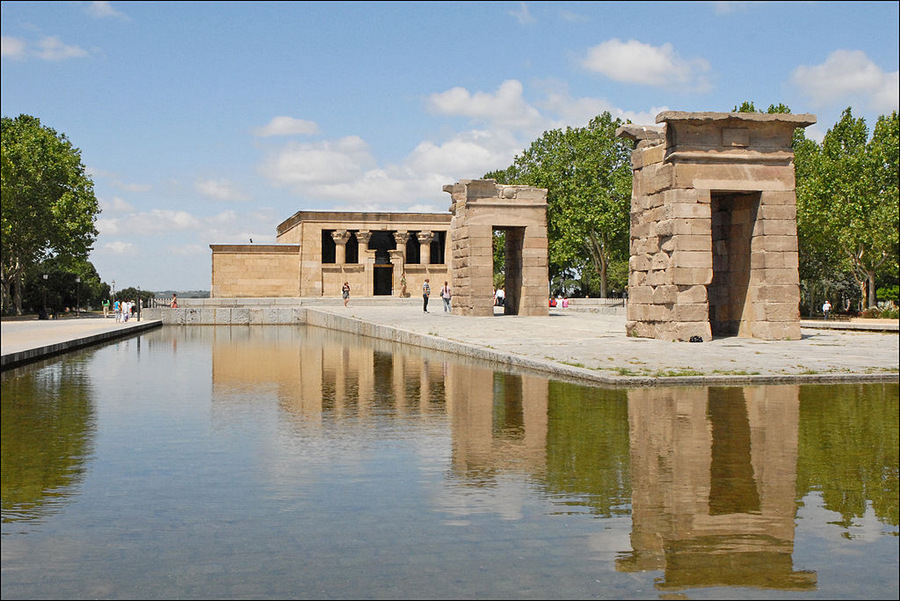 Madrid may be the last place you would expect to see an Egyptian temple, however there is one in the heart of Madrid’s city center. Although the temple was originally built in the 2nd century BC, it was given to Spain by Egypt in 1968, to save it from floods when the Aswan Dam was built. This is a popular place to see the sun set in Madrid.

9. Get panoramic views of the city at Faro de Moncloa 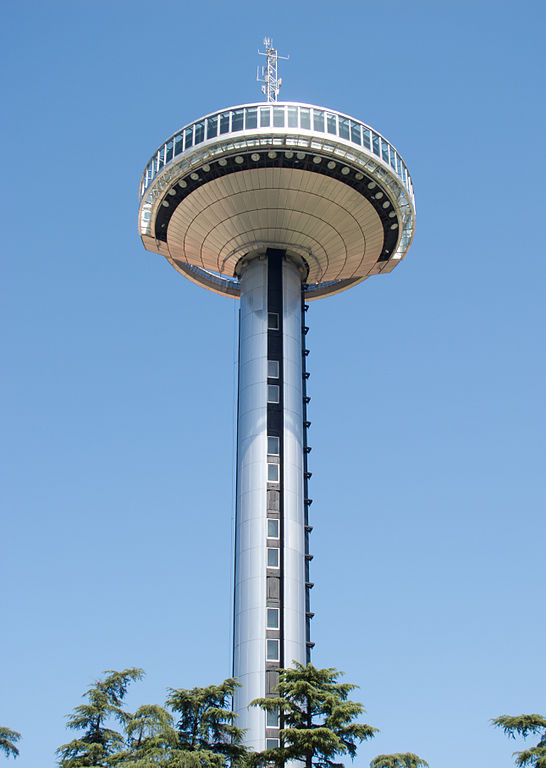 The Faro de Moncloa is a 110-metre-high communications tower. A glass elevator will take you up to the observation deck where you can get panoramic views of Madrid and some of its most prominent landmarks, including the Royal Palace, the La Almudena Cathedral, and the Sierra de Guadarrama mountain range in the distance. 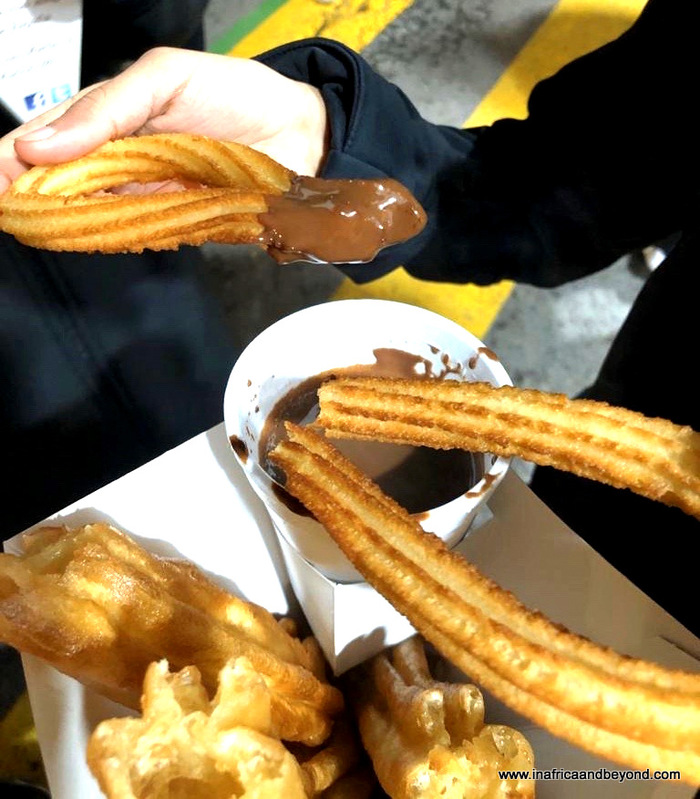 If there’s one food that you must try when in Madrid, it’s churros con chocolate. Churros are a staple food item in Madrid and you will find Churrerias (churro shops) around every corner. Locals eat them with thick, rich, hot chocolate for breakfast or as an afternoon snack, and it didn’t take long for us to join them. This was one of the main highlights of Spain for my children.

11. Get a taste of the rest of Spain at Mercado de San Miguel 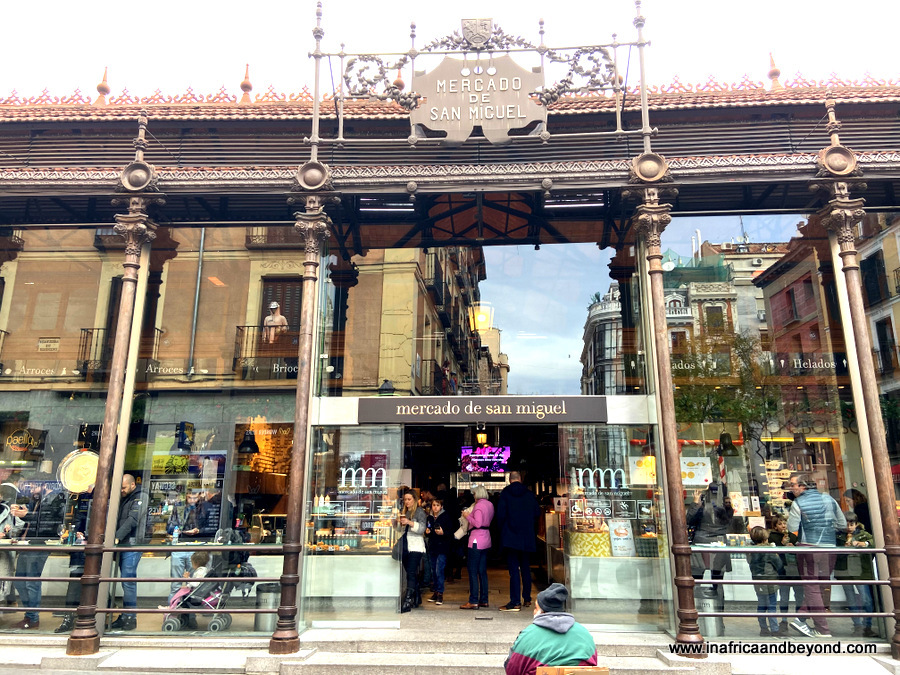 This is a historic indoor food market which was opened in 1916, and the only one of its kind remaining in Madrid. The wrought-iron-and-glass structure reflects early 20th-century architecture. The market sells food and fresh produce from around the country. However, it is also a popular place to meet friends and family. It was really busy when we went there.

Toledo is a fascinating medieval city and UNESCO World Heritage Site perched high above the Castilla La Macha plains, close to Madrid. The castles, cathedrals, ancient bridges and ruins will make you feel as though you’ve stepped into a medieval fairytale. It can be easily visited as a day trip from Madrid by bus or train. We loved exploring Toledo.

Where to stay in Madrid

See this guide by a local for the best neighbourhoods to stay in Madrid.

How to get around Madrid 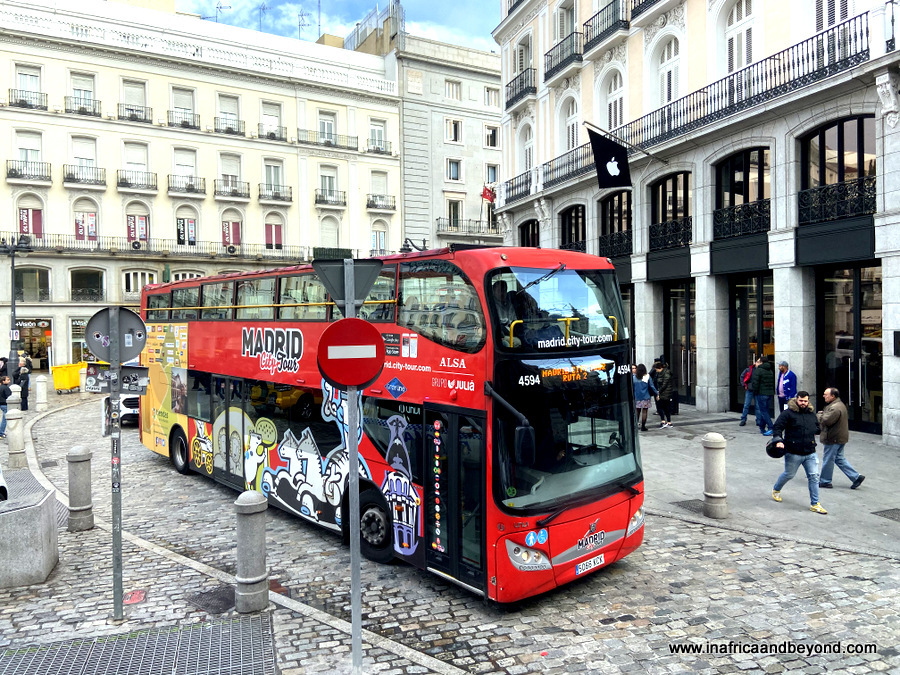 Madrid is best explored from the ground, as you make your way through its historic streets that lead to fascinating markets, parks, plazas or street performers. But if you don’t have much time there – like us – then the best way to see the city’s main attractions in a short space of time is to take the Madrid City Tour Hop-on Hop-off Bus. This is also an easier option when traveling with children. For self-guided travel, Madrid has an extensive public transport system, consisting of trains, buses and metros. Other eco-friendly transport options in Madrid include E-bikes, zero-emission motorcycles, segways and bicycles. 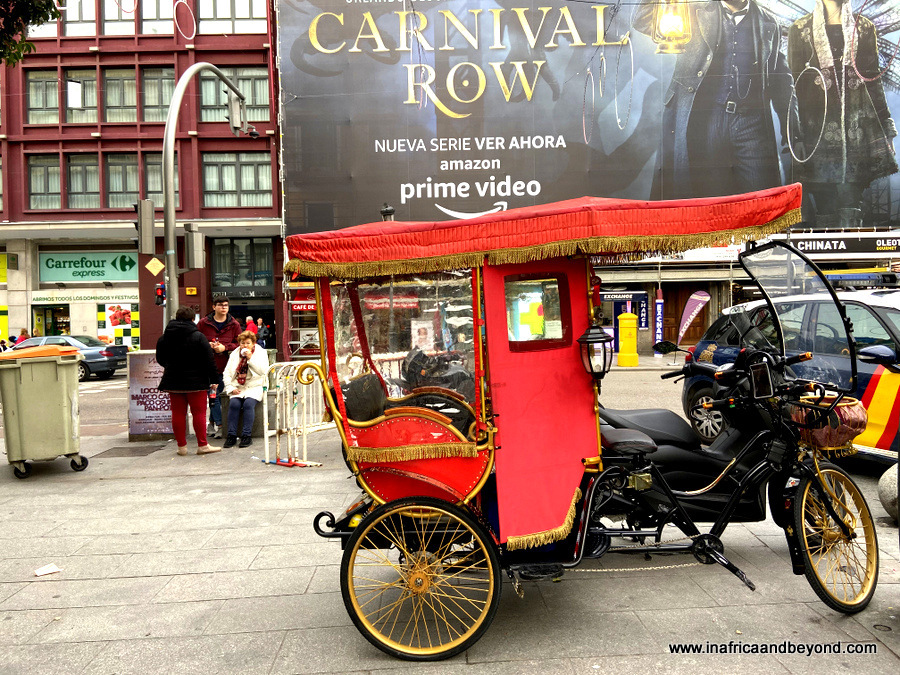 If you’re looking for a place to store your luggage while you explore Madrid, we used Wonder Tours close to Mercado de San Miguel. 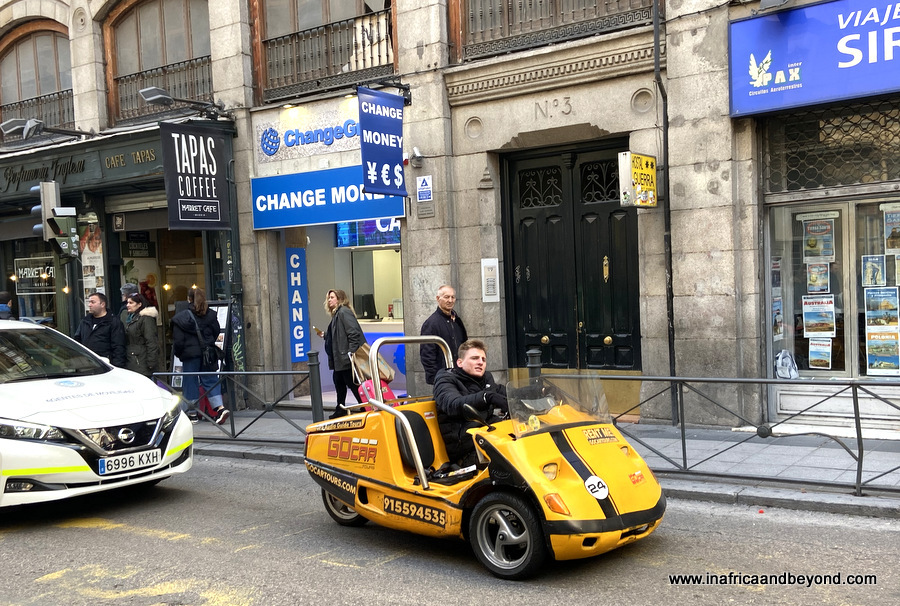 Do you have any tips on things to do in Madrid with kids (or without kids) ?

Book your activities in Madrid.

See things to do in Barcelona. 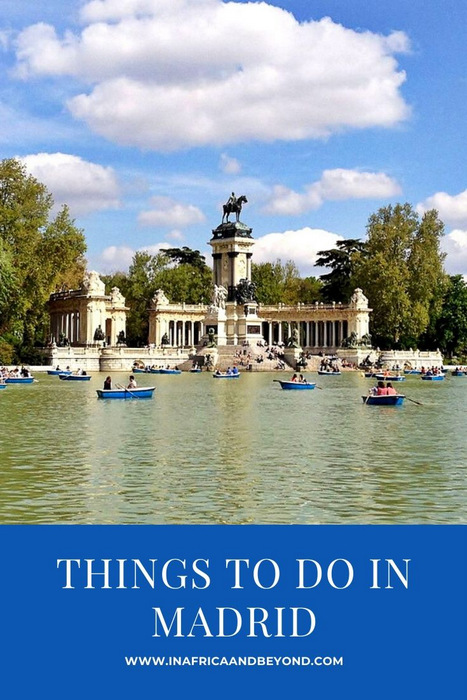 One comment on “12 Best Things to do in Madrid”