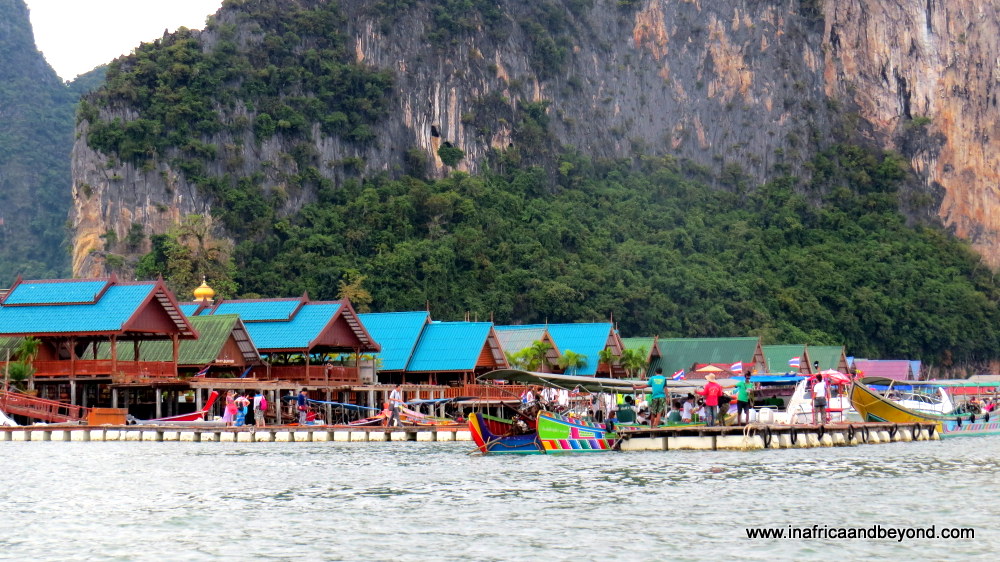 One of the things that I just had to do when visiting Phuket was go on a day trip to Phang Nga Bay . Deciding on the best way to do it was a more difficult decision.  After mulling over umpteen brochures and websites offering the James Bond Island tour then trying to book one and finding it was not available on the date we required, we decided to do things our own way instead.

Getting to Phang Nga Bay

We hired a car and drove ourselves to Surakul Pier in Phang Nga province, about 1.5 hours away from our hotel in Kamala Beach, Phuket. Immediately we were pounced on by a tout who followed us on a scooter. We asked for prices to hire a longtail boat to James Bond Island and Koh Panyee. We were quoted THB2800 (+/- R1000) for a private boat for our family. That was much lower than the guided tours. But they only took cash – which we didn’t have enough of – and they didn't take credit cards.

We tried to explain to him that we wanted either an ATM or money exchanger. Once he understood us, he indicated that he would lead us to an ATM. We began following him when another female tout had a word with him, “hijacked us” and led us to the ATM instead.

Cash in hand, we paid. We were given life jackets and set off on our longtail boat. The sea was green. There were limestone boulders of all sizes and shapes and mangrove forests by the dozen. It was one of the most beautiful places I'd ever seen in my life. The scenery was absolutely stunning and I couldn’t stop taking photos. 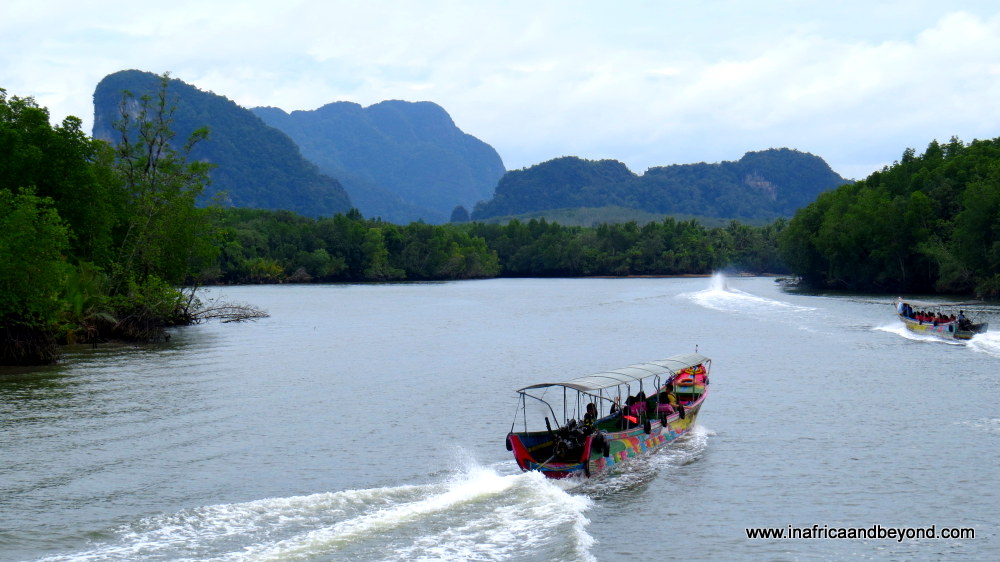 Being a wildlife junkie, I found myself wondering what wild creatures lived in these forests and mountains. We passed other boats then came to the first stop where one could canoe through the caves.

The second stop was at James Bond Island, thus named after being featured in the 1974 movie “The Man with the Golden Gun”. It was smaller than we expected and sandwiched between two bigger boulders. There was a small beach. 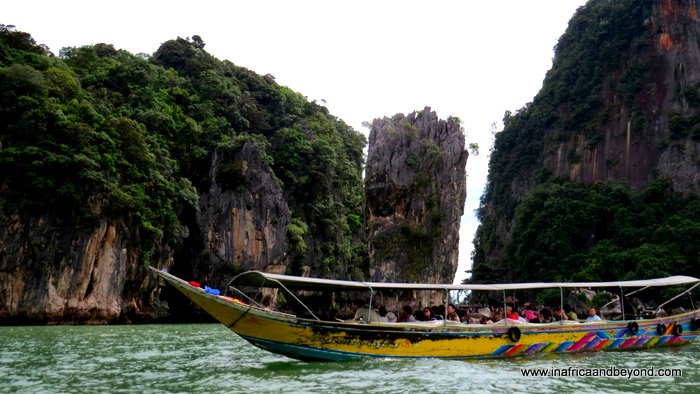 Both of these stops were optional and looked too crowded so we opted to observe them from the outside and not disembark. The third stop however was one where we had to get off and explore - the floating village of Koh Panyee. I could see the colourful roofs and the gold and white dome of the mosque long before I got there. Our boat driver stopped at the main restaurant there but we decided to explore the village first.

Koh Panyee is a Muslim fishing village in Phang Nga Bay . It was established over 200 years ago by three Indonesian families, who left their homeland looking for a new place to live. They vowed to each other that if one of them found a place where they could love and fish, they would signal the others by raising a flag on a mountain as high as possible. Toh Baboo found this island, with its abundance of fish, and raised a flag on the towering cliff thus giving the island the name “Island of the Flag”. 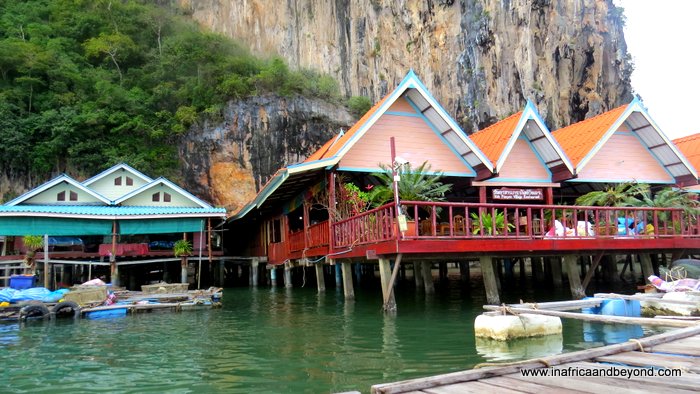 The houses are built on stilts in a confusing labyrinth of little streets and alleys. You have to be careful when you walk there as you could fall into the water ever so easily.  My maternal paranoia kicked in. “Many children must have fallen into the water below,” I mused aloud. “Yes, but they probably learn to swim from the time they're very young here” replied my husband.

People live there. Many are fishermen. Most of the others sell merchandise outside their houses- souvenirs, trinkets, dried fish products and food. Most of the main routes leading towards the mosque were lined with stalls. Many were unattended- a testament to the safety and level of trust. At those that were attended, the women sat with their friends and chatted.

A strong smell of fish permeated the air and there were cats everywhere.  The people greeted us with salaams – greetings of peace. We stole quick peeks into their houses as we walked past. Like Muslims in many countries, they remove their shoes outside their houses. I could see women cooking inside, and children playing. Another woman was cleaning freshly caught prawns in a basket. 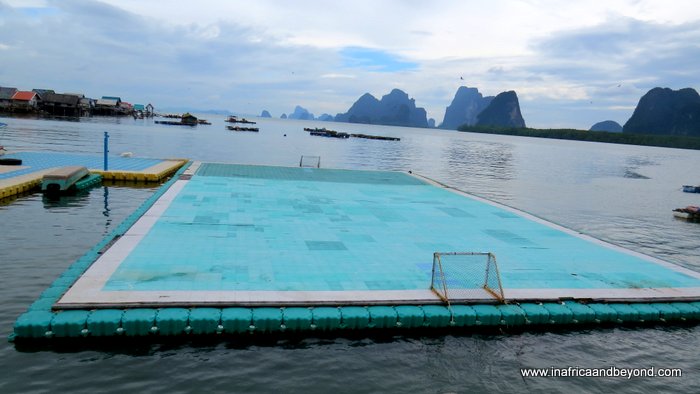 We saw the mosque which occupied pride of place on the island. We also saw the cemetery, the school -where kids were playing sports and the football field, which had been made with planks after a need arose (see picture below). 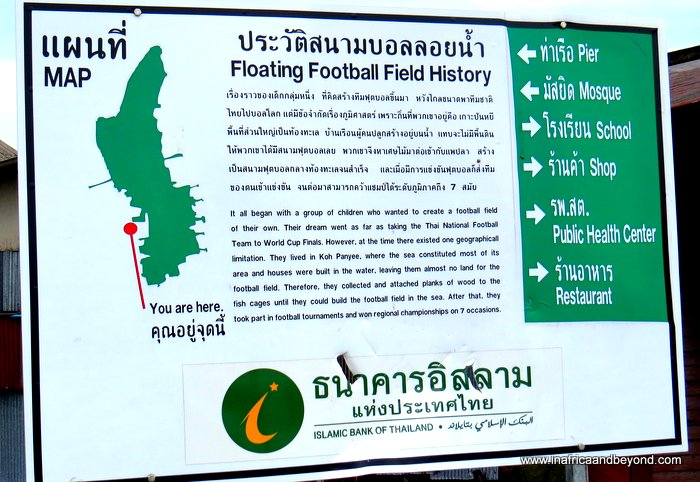 The story behind the floating football field

But the old was offset by some modern touches too. I saw a baby lying in a makeshift sling crib, playing with an electronic tablet. 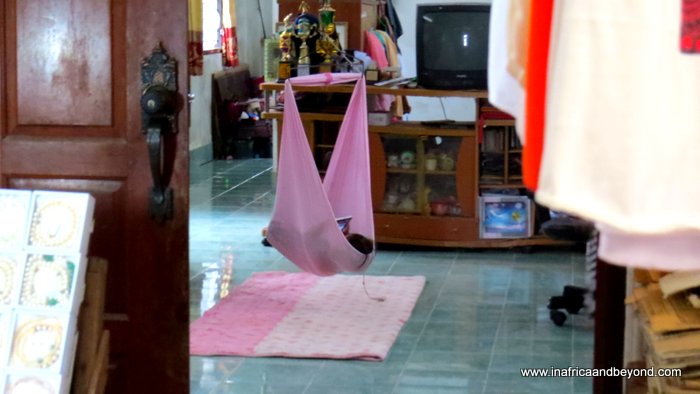 Spot the tablet in the baby's hands?

We ended our visit with a delicious lunch of fresh crab fried rice, tempura prawns and fried prawns with chilli sauce, washed down with an iced green tea milkshake, lychee juice and watermelon juice. Our lunch view was amazing. 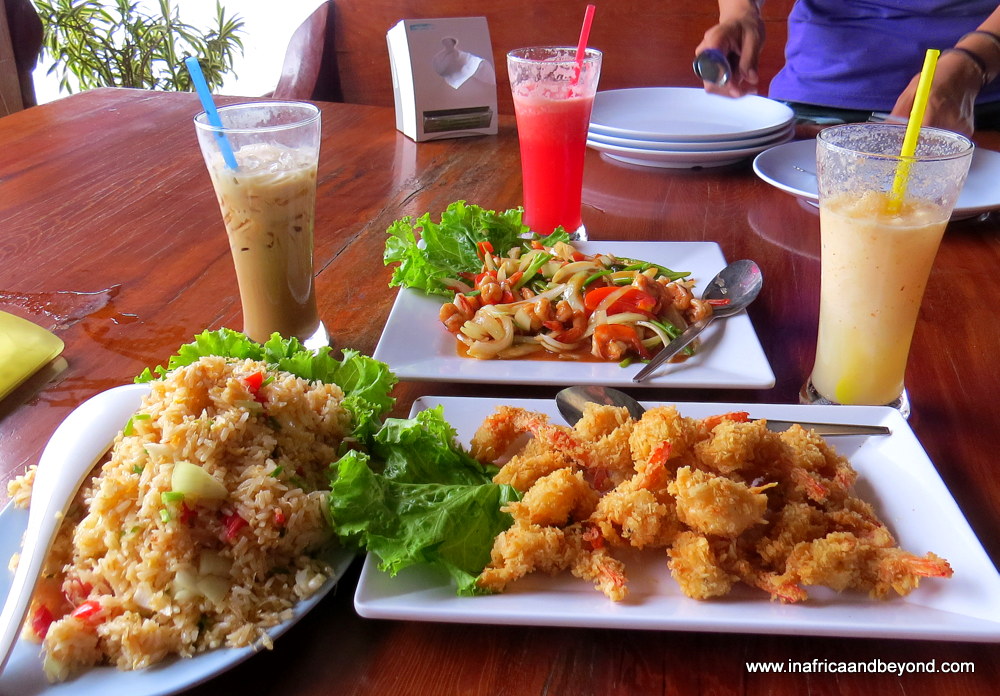 After an exhilarating day exploring one of the most fascinating places I've ever been to, we returned to our pier ready to jump into our car and return to the hotel. But - the car wouldn't start. My husband had mistakenly left the lights on. It was getting late and the complex was almost empty. We went to a nearby stall and explained to the stallholders what had happened. Unfortunately, they didn't speak English. They called someone who did and asked him to speak to my husband.

The woman from the stall went on a motorbike to try and find some help. She was unsuccessful.  but then found a bus driver who happily offered to start the car with his battery. He refused to accept our monetary token of appreciation and so did the woman. They smiled and waved us off - re-inforcing our faith in the good-nature of the Thai people.

See more things to do in Phuket with kids (or without). 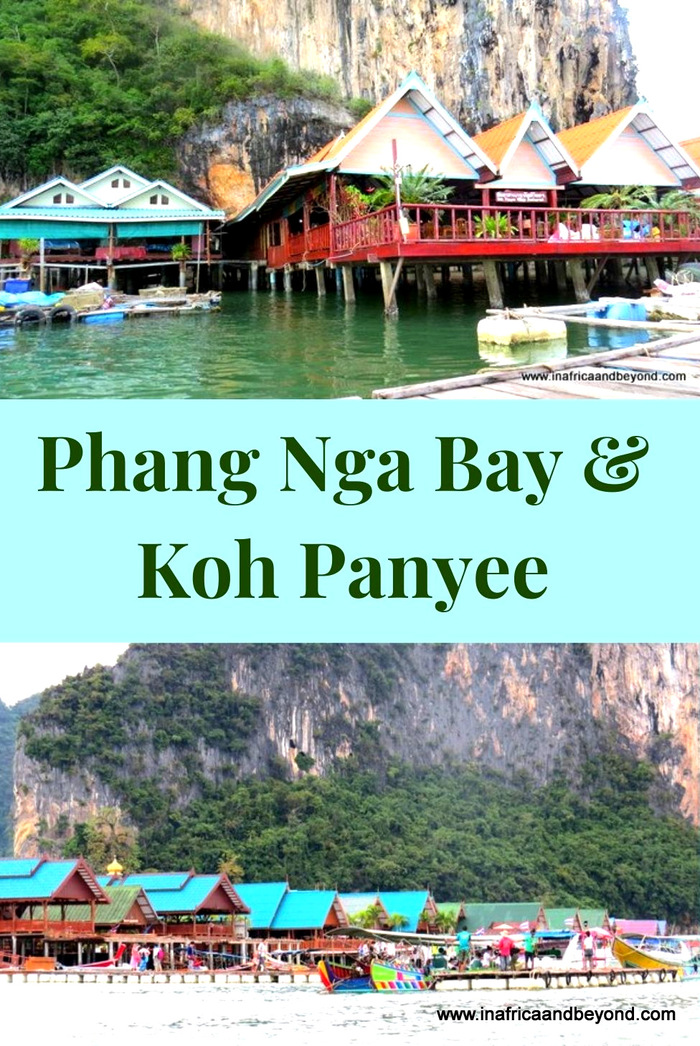