21 Beautiful Mosques Around The World 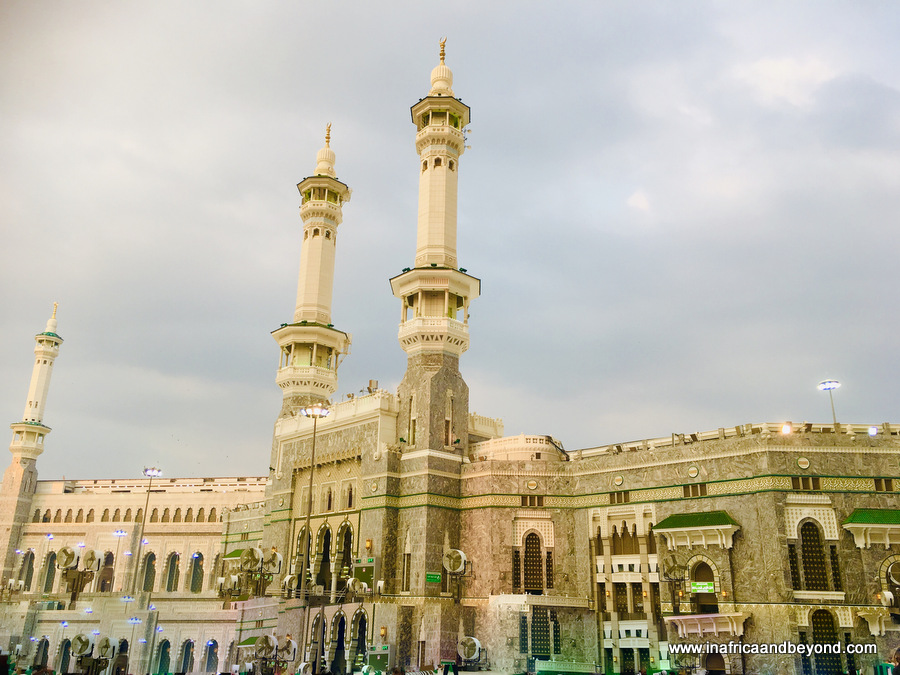 21 Beautiful mosques around the world

When travelling, religious sanctuaries become more than a place to pray. They provide one with a tranquil escape from the city, and an opportunity to meet locals and witness their culture.

I decided to compile a list of some of the beautiful mosques around the world, that I have visited. 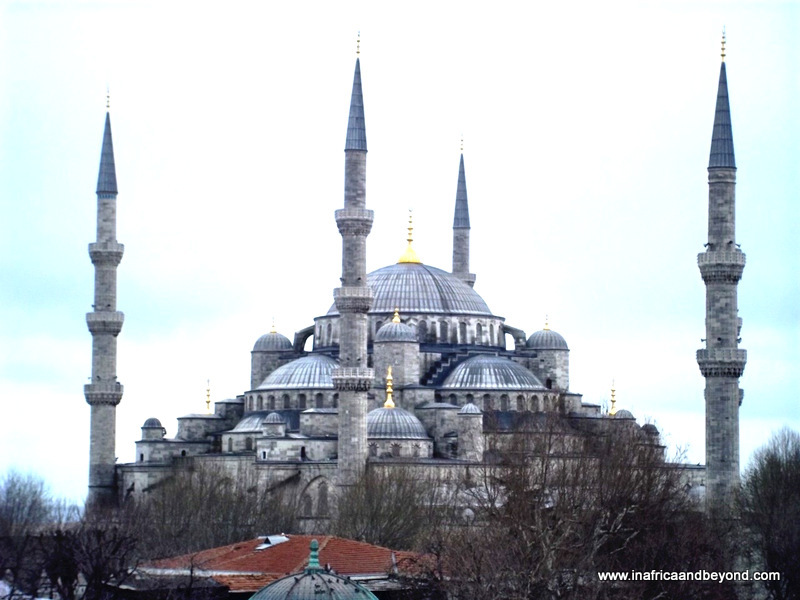 Also known as the Sultan Ahmet Mosque, the legendary Blue Mosque with its cascading domes and six minarets has a blue-tiled interior which gives it its popular title. One of the most majestic Ottoman mosques in the world, it was built between 1609 and 1616 in Istanbul, under the reign of Sultan Ahmet I. The central dome is surrounded by a cluster of smaller semi-domes. The interior is decorated with over 20 000 handmade ceramic Iznik tiles, floral motifs and stained glass windows. It is open to visitors all the time except around prayers. 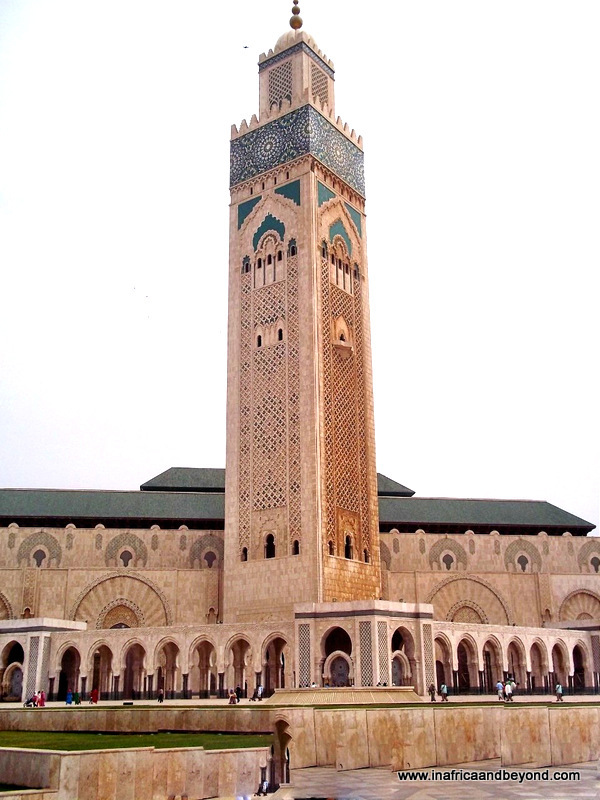 The Hassan II mosque is one of the largest mosques in the world with a capacity of 25 000 worshippers. It also has one of the tallest minarets in the world. It took 10000 craftsmen seven years to build this mosque, as a tribute to the former King of Morocco. The mosque is partly built on reclaimed land over the Atlantic Ocean and portions of the floor are made of glass so that worshippers can pray directly over the sea. 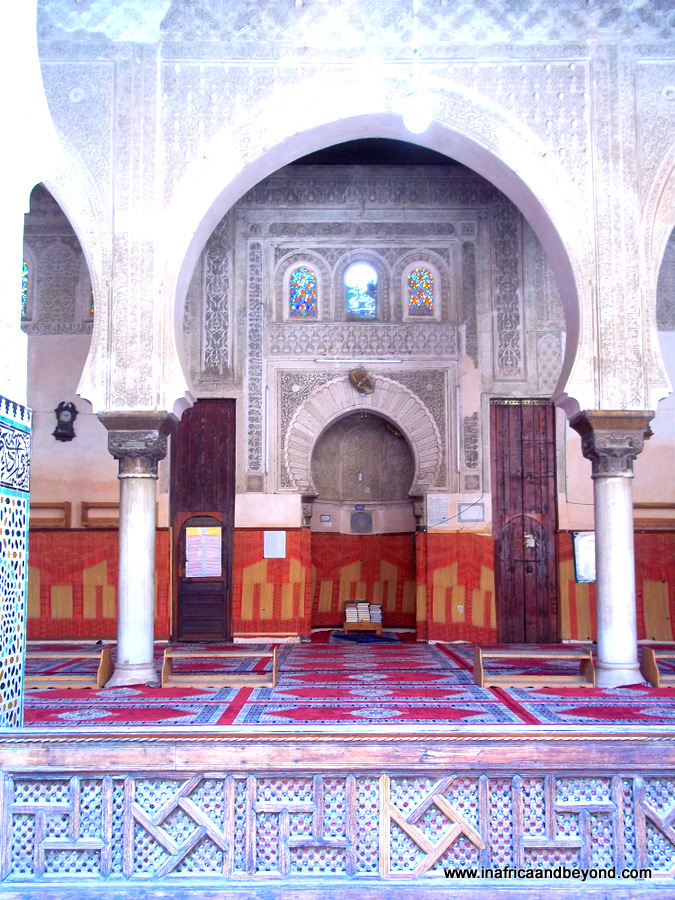 Medersa Bou Inania is part of the oldest university in the world - the University of Al-Karaouine in Fez. It was started by a woman, Fatima al-Fihri, in the year 859. She used her inheritance to fund the construction of a mosque and a madrasa (Islamic school) for her community. Daily prayers are still performed at the mosque. 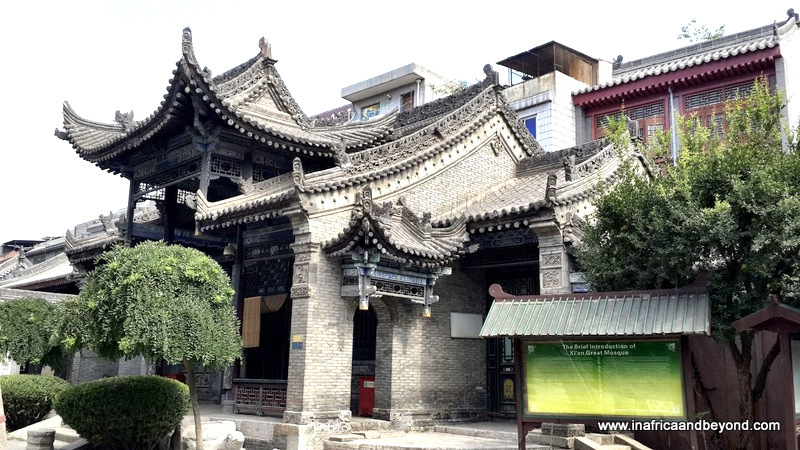 The Great Mosque of Xi'an is the largest mosque in China and one of the oldest in the world, giving it a place on the UNESCO Islamic Heritage List. Construction started in the 8th century but most of it was built during the early Ming dynasty. (14th century). The mosque combines traditional Chinese architecture and Islamic art, making it truly unique. 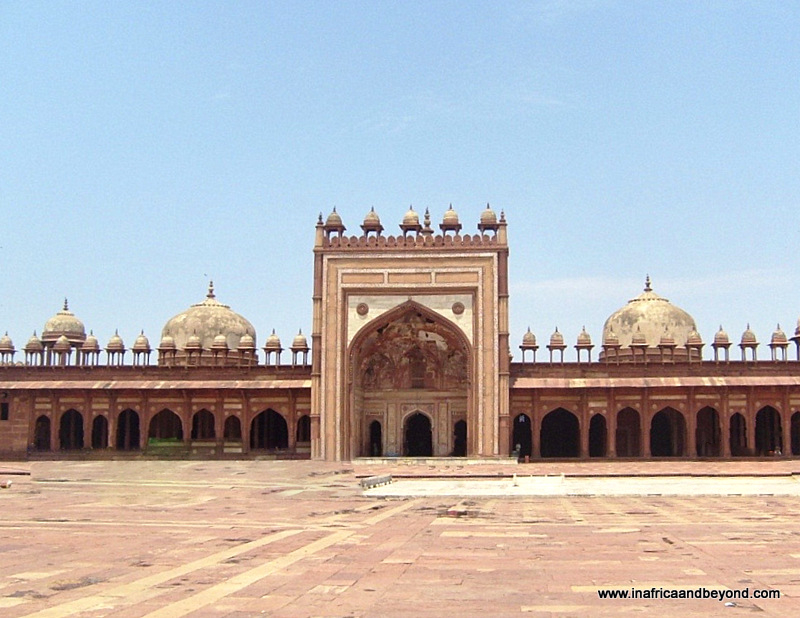 This great mosque in Old Delhi is one of the largest mosques in India, with a courtyard capacity of 25,000 worshippers. Construction began in 1644 under the instruction of the Mughal emperor, Shah Jahan, who built the Taj Mahal and the Red Fort. Five thousand artisans were involved in the building of the elevated mosque. Made of red sandstone and white marble, the mosque has three great gates, four towers and two 40 m-high minarets. 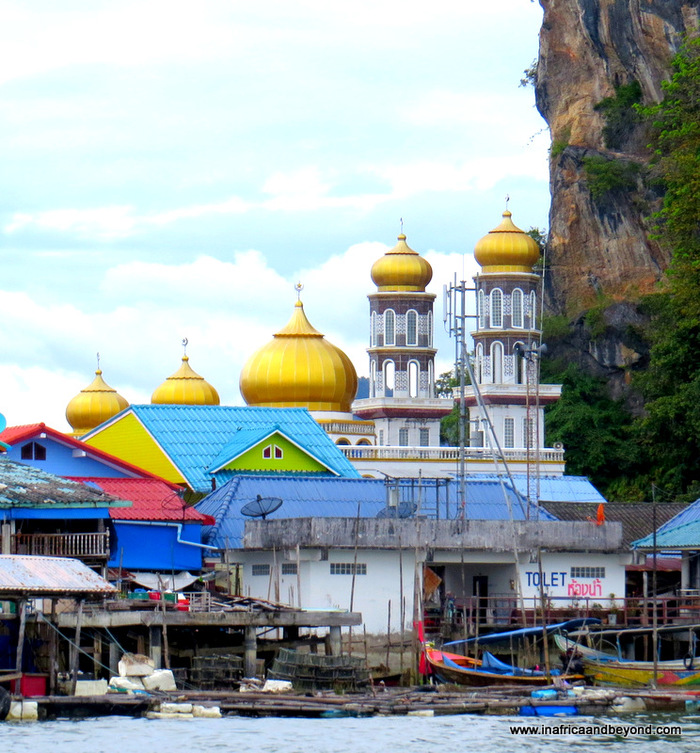 Koh Panyee is a Muslim fishing village in Phang Nga Bay, Thailand, and one of the most fascinating places I’ve ever visited. It was established over 200 years ago by three Indonesian families, who left their homeland looking for a new place to live. Most of the island is built on stilts. The mosque is one of the few exceptions, and its gold domes can be seen from afar. 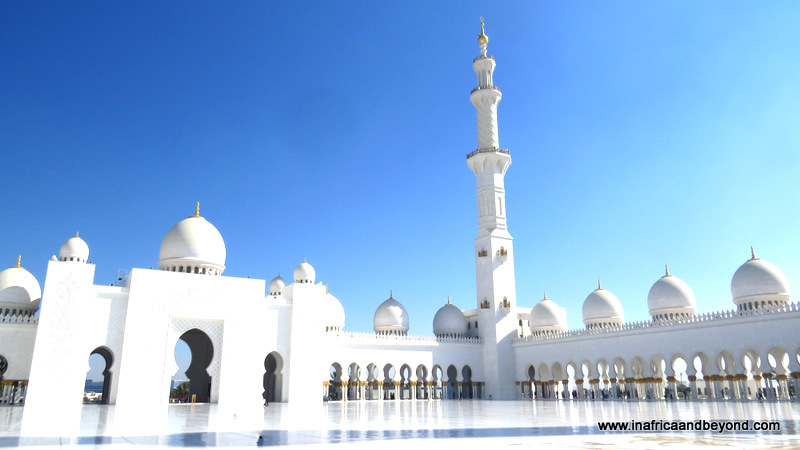 The breathtaking Sheikh Zayed Grand Mosque is one of the largest and most beautiful mosques in the world, accommodating up to 40,000 worshippers. It is also Abu Dhabi’s most visited attraction. A magnificent sight in pristine white marble, the mosque has 82 domes, over 1000 columns, 24 carat gold gilded chandeliers and giant floral inlays across the expansive courtyard. It also features the world’s largest hand-woven carpet and one of the largest chandeliers in the world. 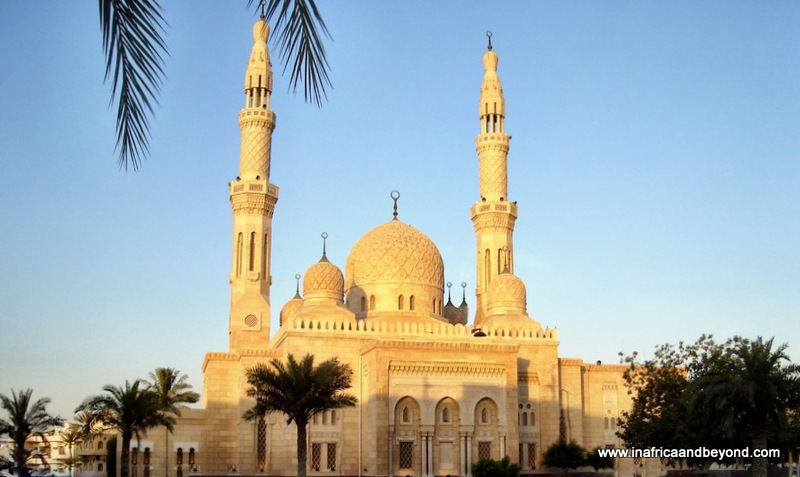 This mosque, situated on the Jumeirah Beach Road, is a landmark in Dubai. Built in 1976, the mosque is made of carved white stone which takes on a golden colour as the sun sets. It is open to locals and tourists, and tours are offered. 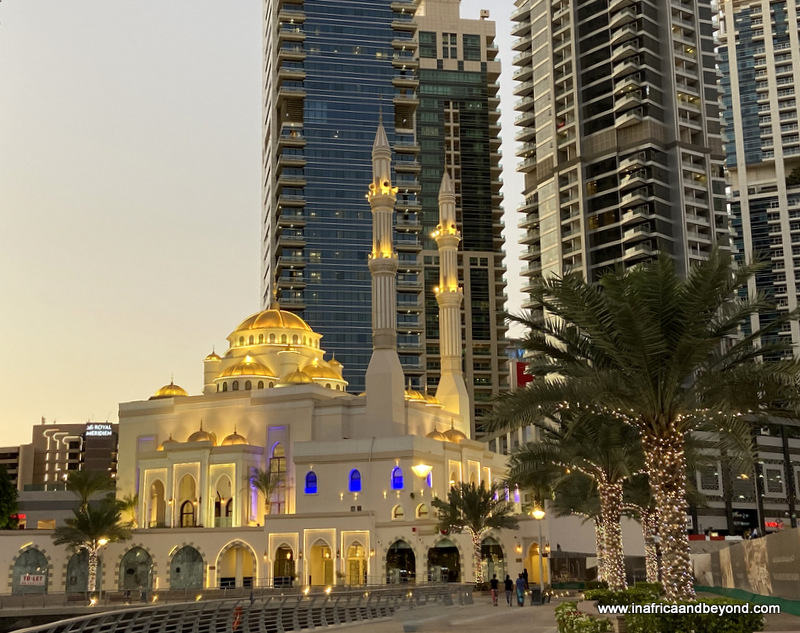 This mosque was opened in 2013. It is the only mosque on the Dubai Marina and can be found at the southern end. The name Al-Rahim means "the merciful" or "the forgiving". 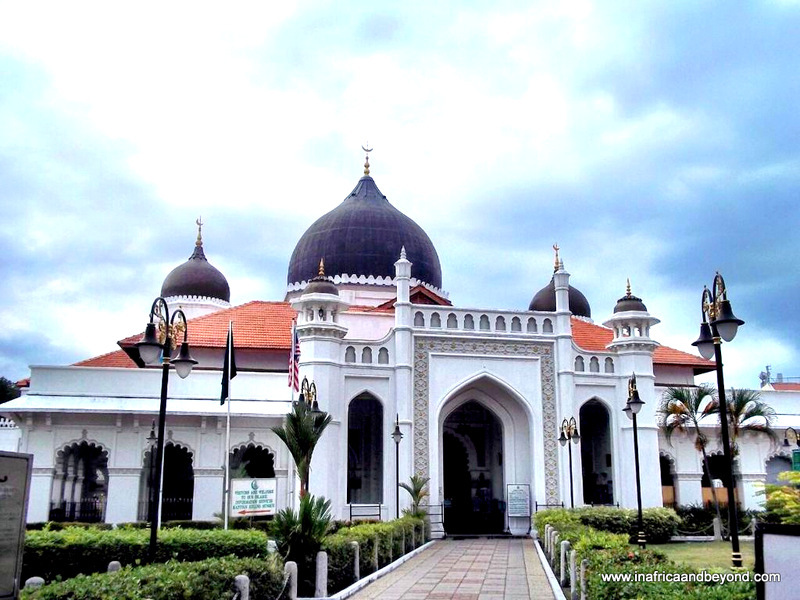 This historic mosque was built in 1801 by the first Indian Muslim settlers in Penang, who were East India Company troops. The largest mosque in Georgetown, it was named after the ‘kapitan’ of the Keling (a leader of the South Indian community similar to the leader of the Chinese community). The whitewashed mosque has large golden-yellow Mughal-style domes, crescents and stars and features a single minaret. 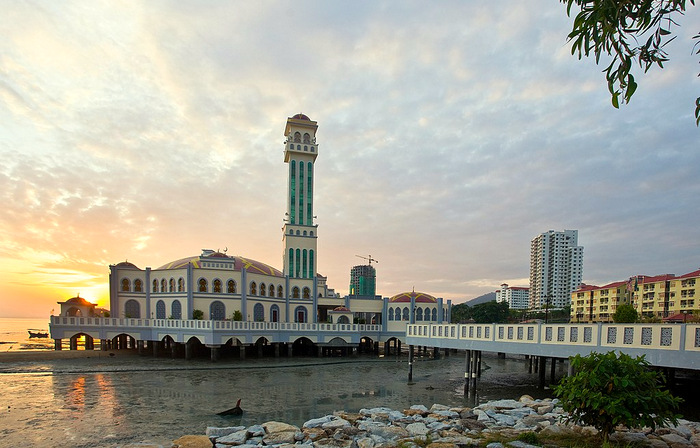 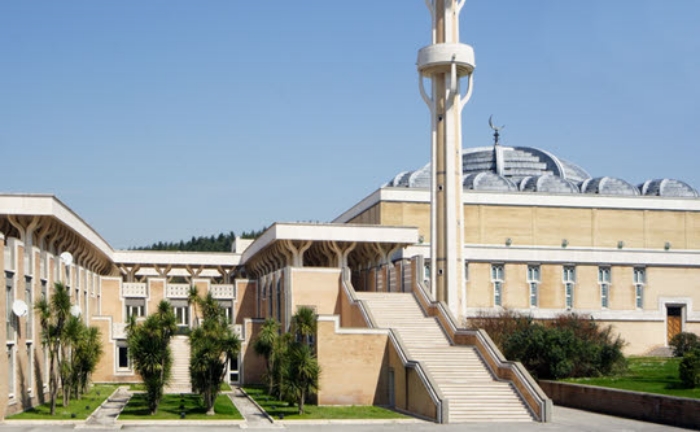 The Mosque of Rome is the largest mosque in Italy and one of the largest in Europe. It can accommodate 12,000 people. Opened in 1995, the mosque was founded by the exiled Prince Muhammad Hasan of Afghanistan and his wife, Princess Razia. The construction was financed by King Faisal of Saudi Arabia, head of the Saudi royal family, and several other Muslim states. Apart from prayers, the mosque also provides cultural and social services for the Muslim community, and holds wedding ceremonies and funeral services inter alia. 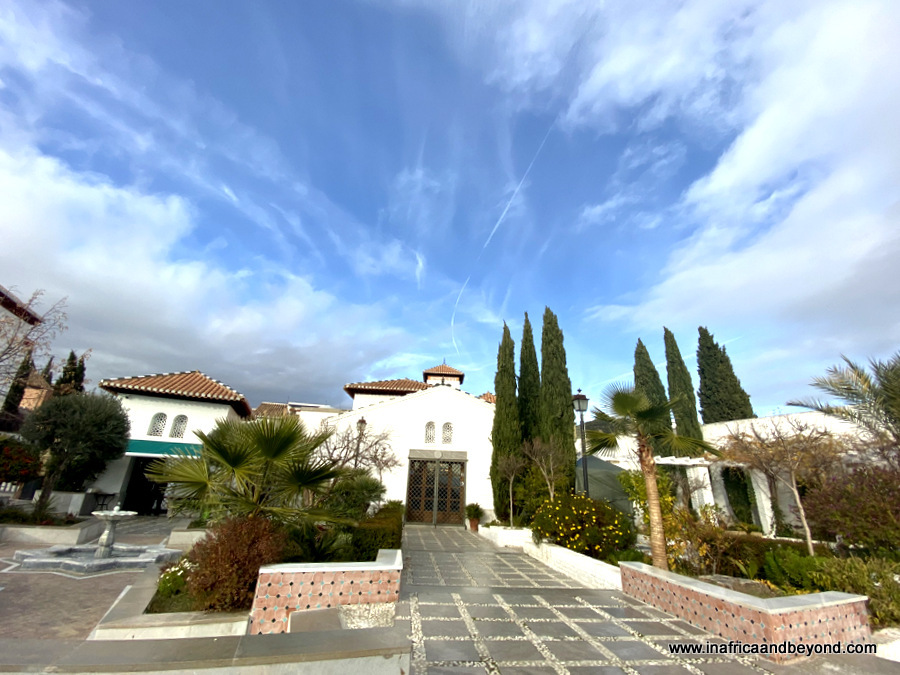 The Grand Mosque of Granada

The Grand Mosque of Granada (Mezquita) is built on a hill near the San Nicolas viewpoint in Granada. It was opened in 2003 - the first and only mosque to open in Granada after the Muslims lost Spain in the 15th century. Although it doesn’t feature the traditional architecture associated with mosques, it is beautiful in its own way, with serene gardens and fountains and breathtaking views of the AlHambra.

The Nizamiye Mosque is one of Johannesburg’s most distinctive landmarks. Officially opened in 2012, it is the largest mosque in the southern hemisphere, accommodating up to 6000 worshippers. The mosque is a smaller replica of the Selimiye Camii mosque in Edirne, Turkey, a World Heritage Site which was completed in the 1570s. 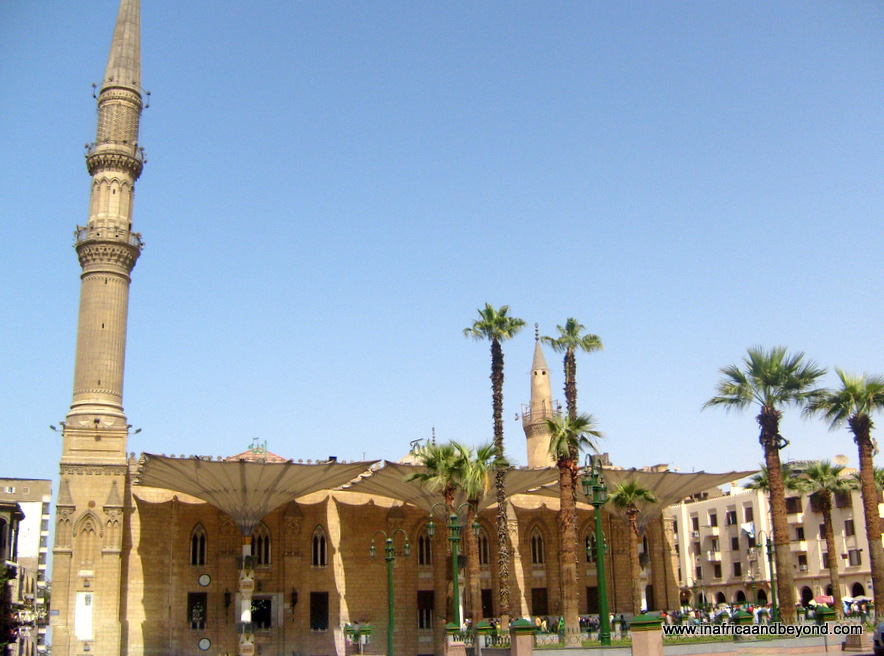 This mosque, located near the Khan El-Khalili bazaar in Cairo, was originally built in 1154. It is believed to be the burial place of the head of Hussein (the grandson of Prophet Mohammed (PBUH)), who was martyred. The mosque is also believed to contain the oldest complete manuscript of the Holy Qu’ran. In front of the mosque are huge ornate giant umbrellas, like those in Saudi Arabia.

16. Dome of the Rock, Jerusalem 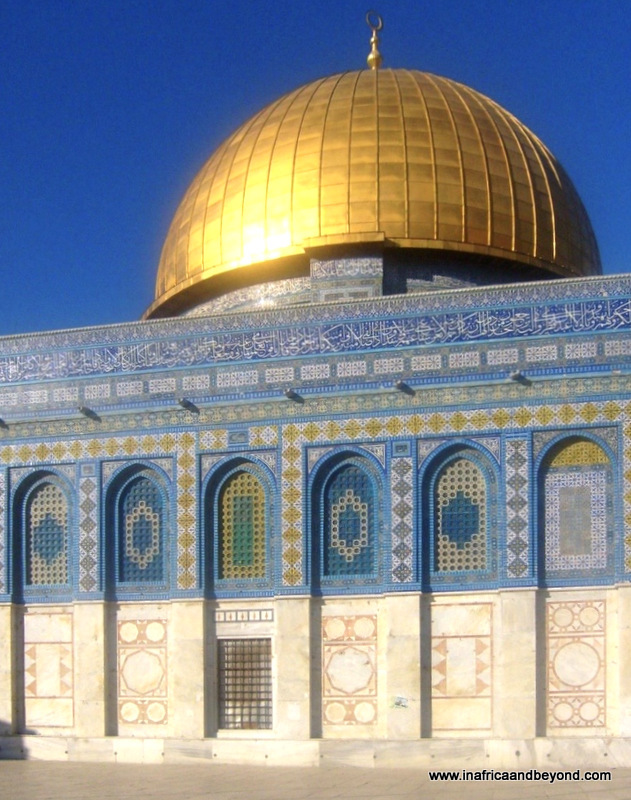 Dome of the Rock

The Dome of the Rock is situated in the Al Aqsa complex in Jerusalem, the third holiest site in Islam. It is one of the earliest surviving buildings from the Islamic world, and one of very few places that are sacred for Muslims, Christians and Jews. There is a large rock in the centre from where it is believed that the Prophet Muhammad (PBUH) ascended to Heaven on his night journey. 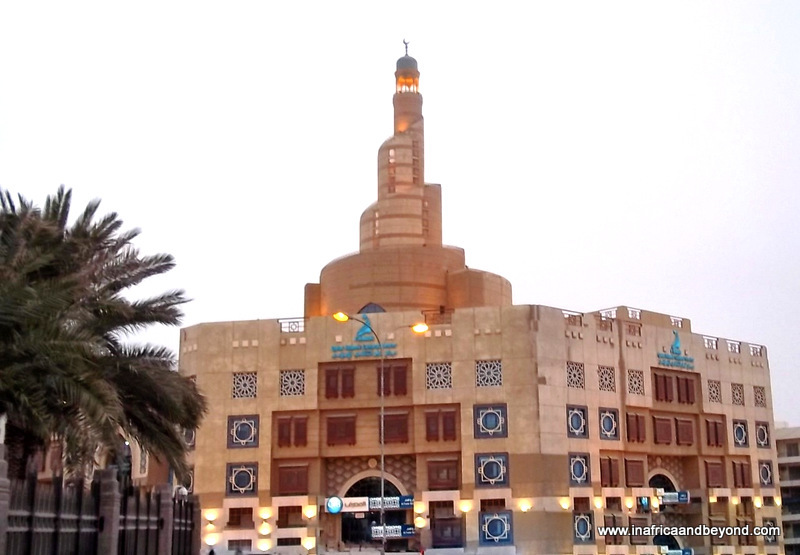 Also known as the FANAR, this Islamic Cultural Center has a spiral tower, which resembles a wedding cake. The mosque’s design resembles that of the Great Mosque in Samarra, Iraq.   The center is open to all visitors who want to learn about the Islamic faith in a relaxed environment. 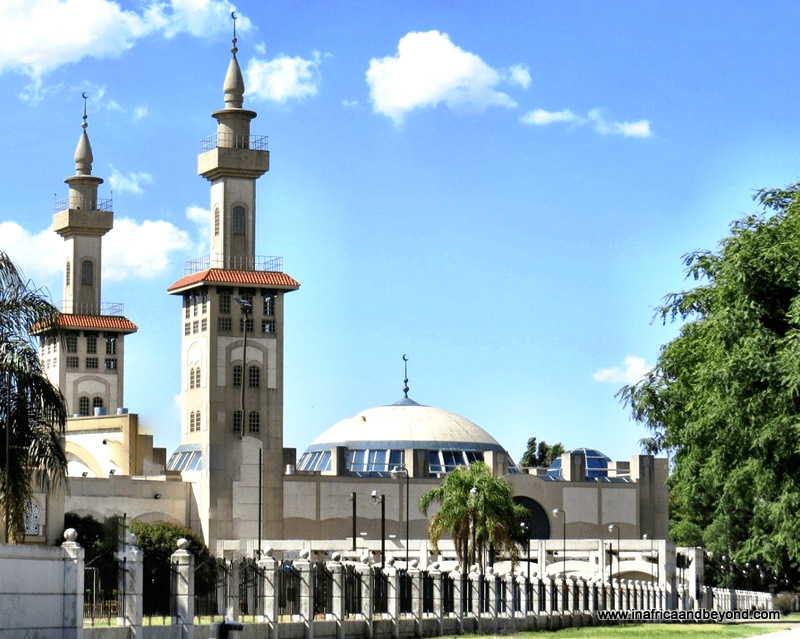 The King Fahd Islamic Cultural Center is a Mosque and center for Islamic culture located in the Palermo neighbourhood of Buenos Aires, Argentina. It is the largest Mosque in Latin America and encompasses prayer halls and schools. Although it was completed in 1996, the mosque was officially opened by members of the Saudi royal family in 2000. 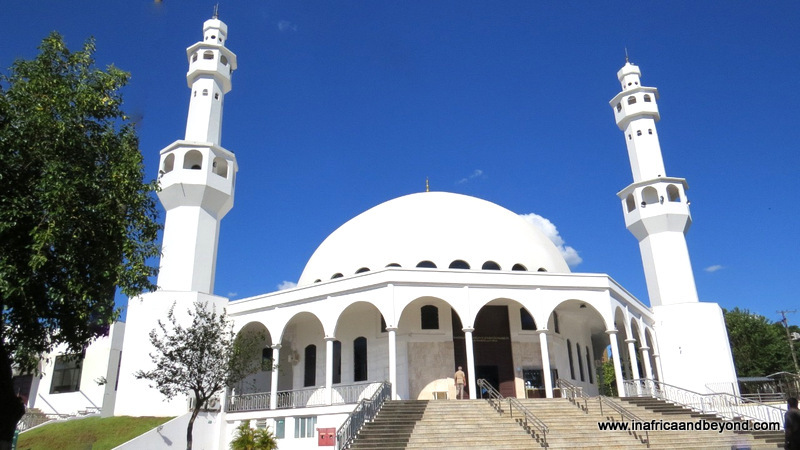 This mosque, situated near the Iguazu Falls, was inspired by the Al-Aqsa Mosque, in Jerusalem. Opened in 1983, it was named after Omar Ibn Al-Khatab a pious companion of the Prophet Muhammad (PBUH).

Saving the best for the last…

20. The Grand Mosque of Makkah 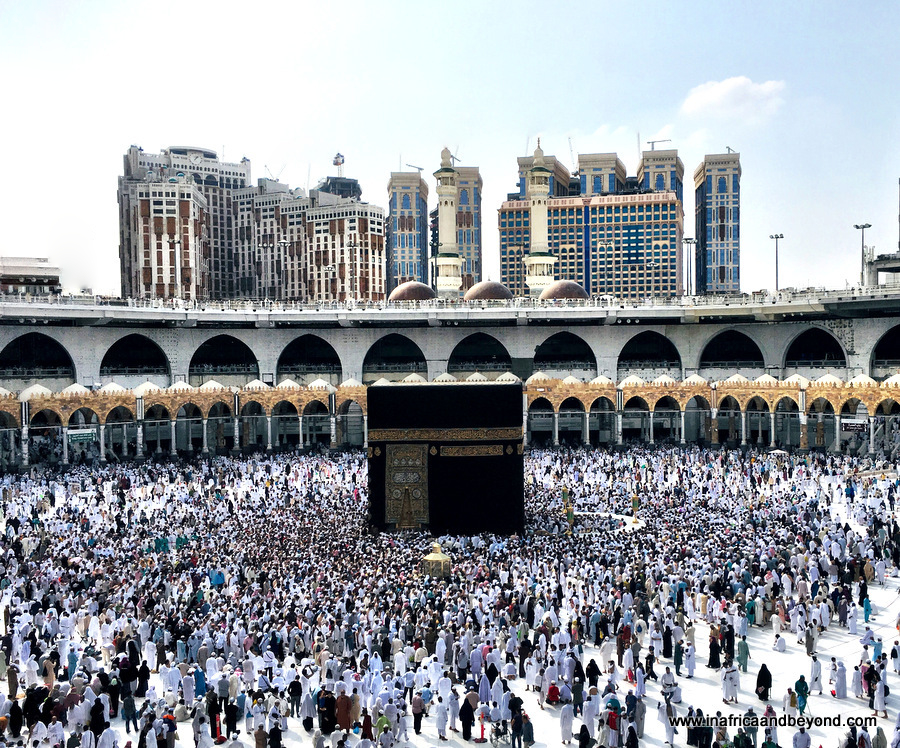 This is the largest mosque in the world, home to the Kaabah, which is the holiest shrine in Islam. Millions of people from around the world visit the mosque every year on pilgrimage. The mosque currently has a capacity of 1.5 million worshippers, but it is constantly being expanded to accommodate increasing numbers of visitors every year.

21. The Grand Mosque of Medina 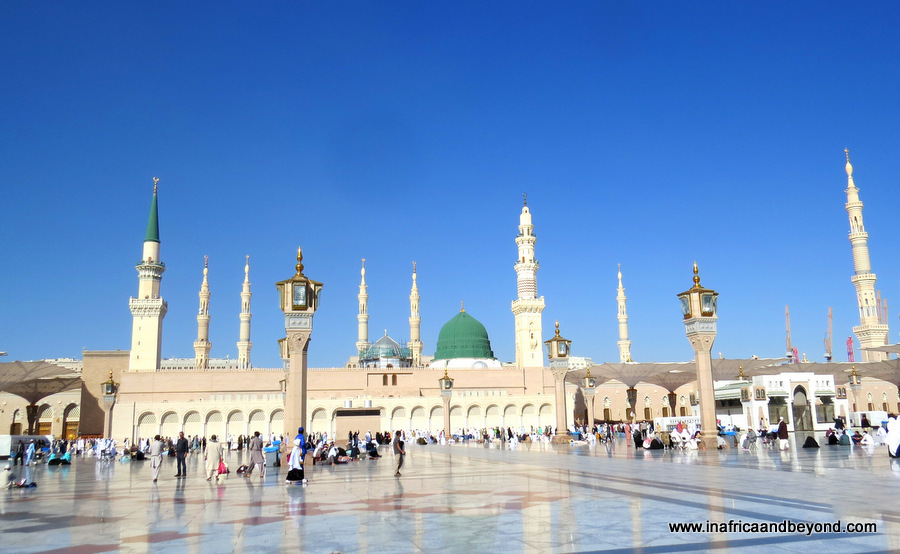 This is the second largest mosque in the world and the second holiest site in Islam. Originally built by the Prophet Muhammad (PBUH),  it houses his tomb as well as those of his two main companions – the first two caliphs. The mosque currently has a capacity of 1 million but it is also constantly being expanded.

Which beautiful mosques around the world have you visited? Where is your favourite mosque? 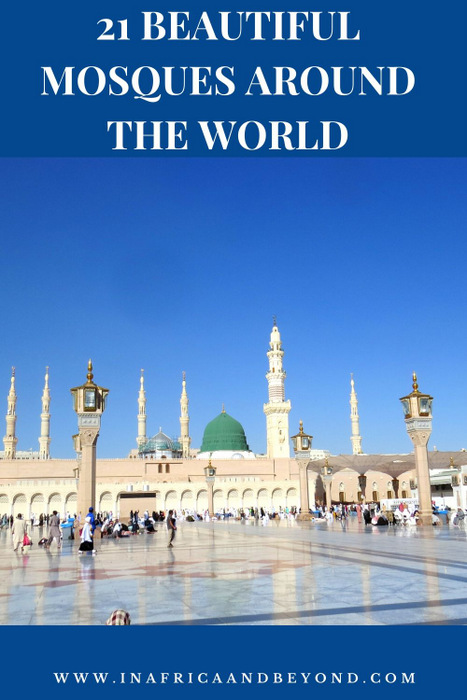 8 comments on “21 Beautiful Mosques Around The World”