As one travels on the busy highway between Johannesburg and Pretoria, it is likely that one’s eye will be caught by a striking vision of domes and minarets, a sight one would be much more likely to see in Istanbul, Turkey than in Midrand, Johannesburg. It is the Nizamiye Mosque , one of the most photographed works of architecture in South Africa. 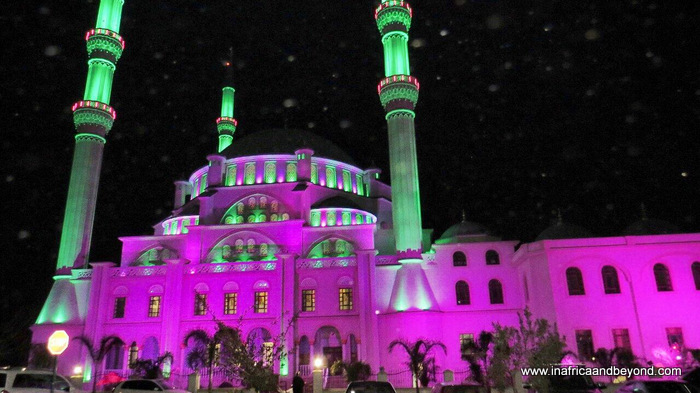 The Nizamiye Mosque is a smaller replica of the Selimiye Camii mosque in Edirne, Turkey, completed in the 1570s, and now a World Heritage Site. The latter was built by architect Mimar Sinan during the Ottoman era. Now, Mimar Sinan is a name that one hears a lot in Turkey as I discovered on my visit to Istanbul. Mimar Sinan, (Sinan the Architect) was the chief Ottoman architect and civil engineer for three sultans including Suleiman the Magnificent. He was responsible for the construction of more than 300 major structures and many smaller projects. However he considered the Selimiye Mosque to be his masterpiece. Sinan’s apprentices would go on to build the Blue Mosque in Istanbul and the Taj Mahal in Agra, India. 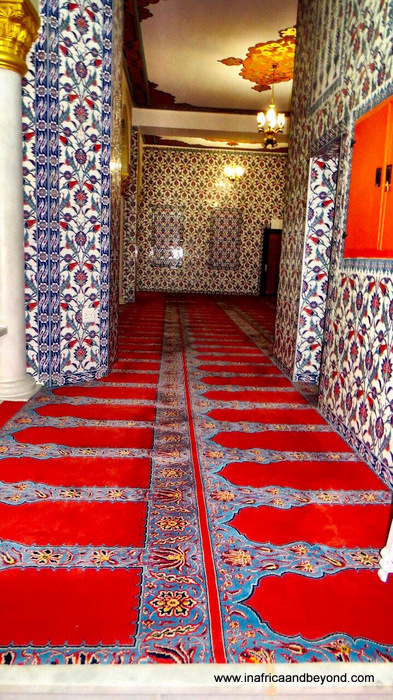 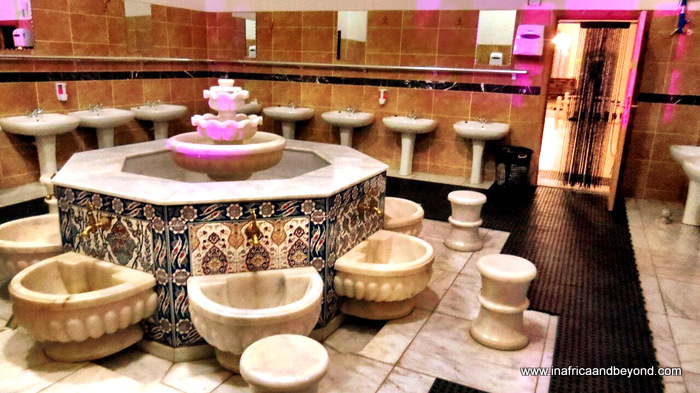 It is now the largest Masjid (mosque) in the southern hemisphere and can accommodate 6000 worshippers. Framed by four towering minarets, the mosque has a main dome and four smaller domes. Marble columns, rich mosaics, fountains, ornate domed ceilings, and Turkish calligraphy complete the spectacular construction. 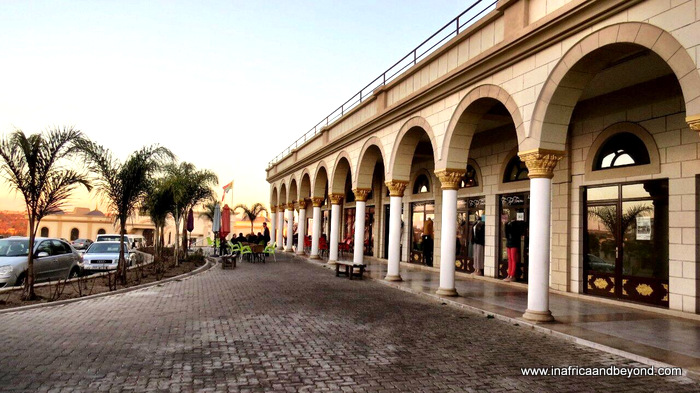 The complex within which it stands also houses a school, clinic, gallery, shopping centre and the Ottoman Palace, a delicious Turkish restaurant.  The low-cost clinic was added on at the suggestion of former president Nelson Mandela who was an inspiration to Ali Katircioglu. The gallery contains photographs of religious relics of which the magnificent originals are kept in the Topikapi Palace in Istanbul. 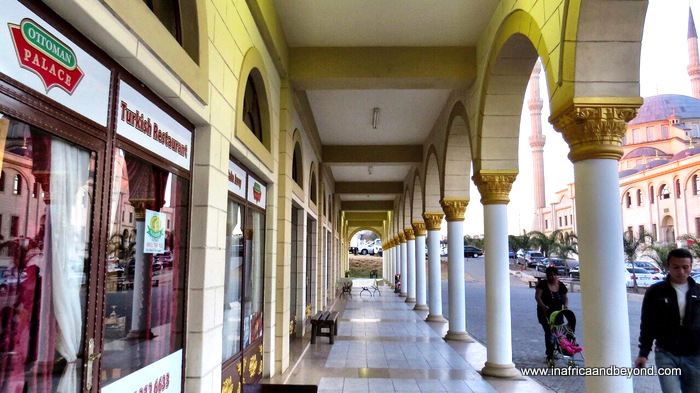 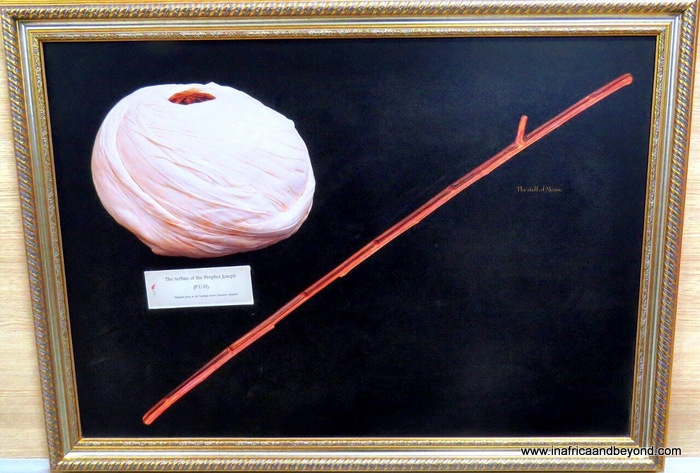 Photograph of relics at Topikapi Palace

The Ottoman Palace restaurant consists of a grand dining room with high ceilings where one can watch the chefs at work. The cuisine is Turkish of course, and popular Turkish dishes such as kebabs, pides and Lahmacun are on offer. I ordered the İskender (Alexander) kebap, which I had first eaten at the Grand Bazaar in Istanbul. Some stories say that it was a favourite food of Alexander The Great. It consists of a type of kebab made from lamb and served with yoghurt, a tomato sauce and pita bread. It didn’t disappoint. I washed it down with a delicious cherry juice. For dessert, we visited the bakery next door and bought different varieties of decadent baklava. 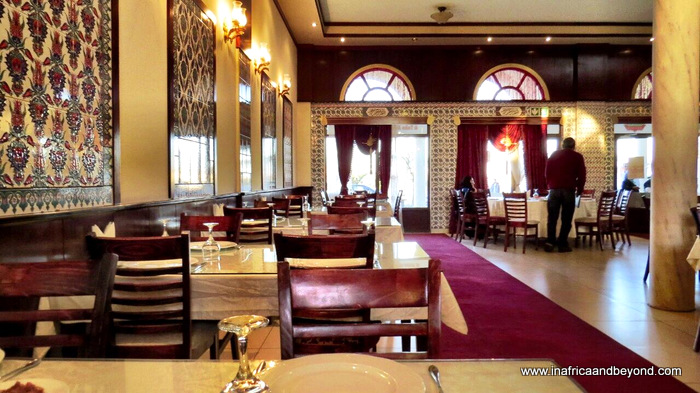 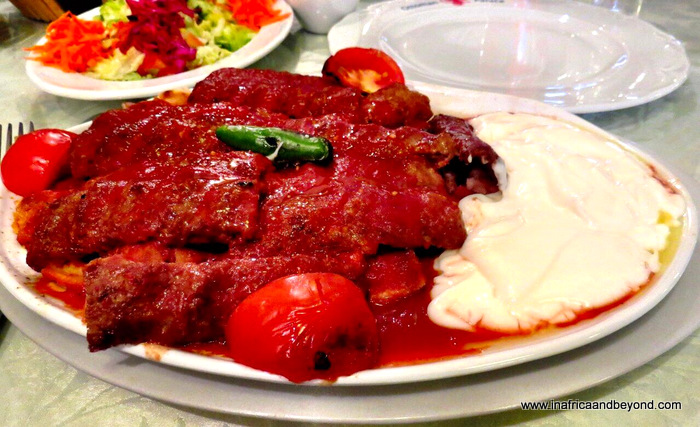 The complex resonates with peace and serenity and for that few hours that you are there you feel like you are in a time warp. As I left there, I felt as though I had emerged from another dimension. Do pay a visit and preferably go in the evening to see the colours change in the domes and the heavens. 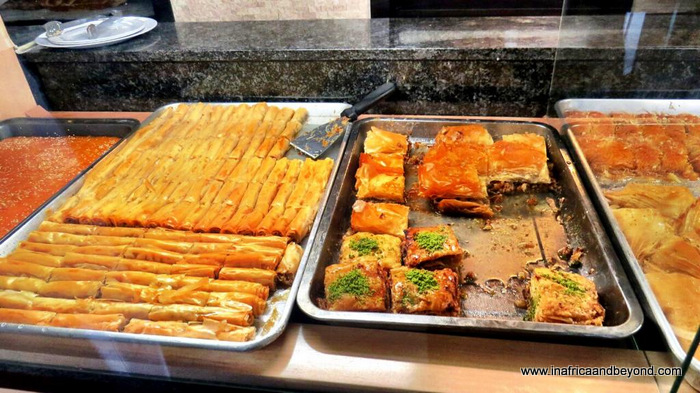 Baklava at the bakery

Non-Muslims are welcome to visit the complex, Entrance is free and guided tours are available. Women should be modestly dressed.

You can visit Nizamiye Mosque at the Corner of Old Pretoria Road and Le Roux Avenue in Midrand, between Johannesburg and Pretoria.