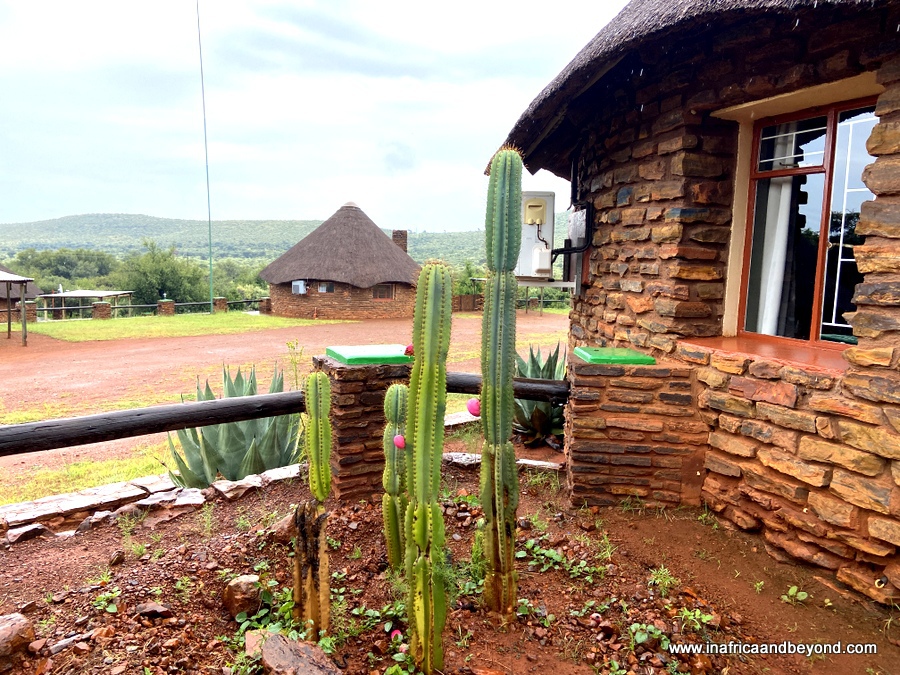 The Northern Cape is South Africa’s largest province, comprising over 30% of the country’s land. It was also the province we had explored the least. Besides The Big Hole of Kimberley, we hadn’t seen much of its attractions. In an effort to change that, we planned a Northern Cape road trip that would take us to some of the wonders of the region. Our first stop was Kuruman, which is part of the Green Kalahari – the fertile region where South Africa’s longest river, the Orange River, meets the Kalahari desert.

Exhausted after a long drive from Johannesburg with barely any stops, it was a huge relief to enter the gates of the Red Sands Country Lodge. The red rondawels and red sand synonymous with the Kalahari, against the backdrop of the green hills and bushes, made for a refreshing sight and the wide open spaces made us feel more relaxed instantly. 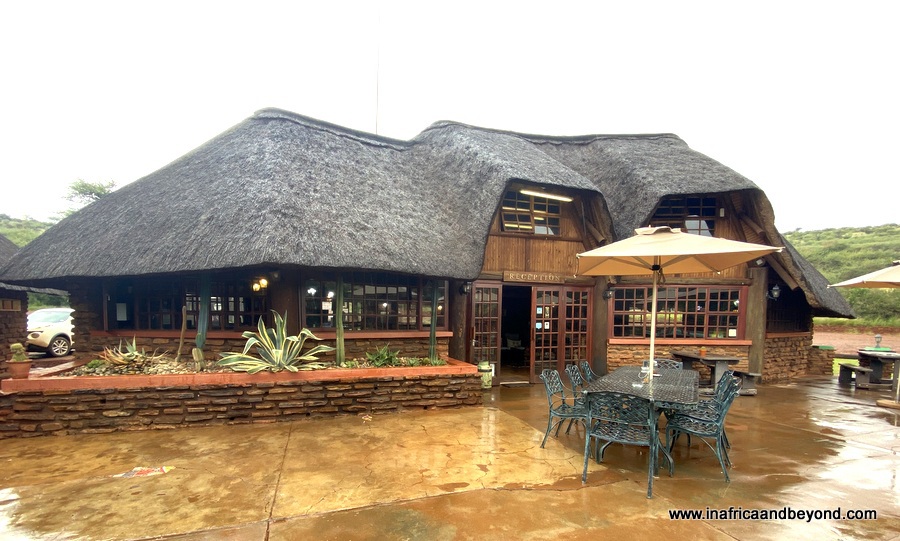 Reception building - on a rainy day

Set amongst the scenic Kuruman hills, on the edge of the ancient Ghaap plateau, the family-run lodge is situated in a 1800ha private nature reserve, with 17 different game species. One can explore the reserve on foot, by mountain bike or by self-driving. We were keen to hike there but the persistent rain throughout our stay ensured that we didn’t. However, we did a self-drive and saw zebras and springboks. There is a bird hide there too, and over 50 different species have been identified on the property. 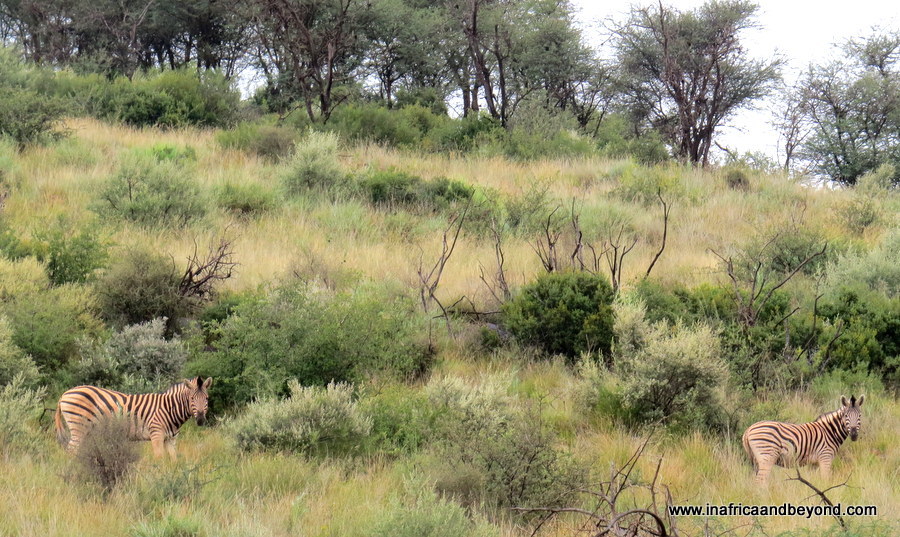 Young kids will love Red Sands Country Lodge. There is a small petting farm at the lodge with several animals including alpacas, goats, sheep, horses, chickens, ducks and bunnies. The kids will love touching and feeding them. The swimming pool with its sun-loungers and umbrellas is also quite popular, especially on hot summer days, and so is the jungle gym. 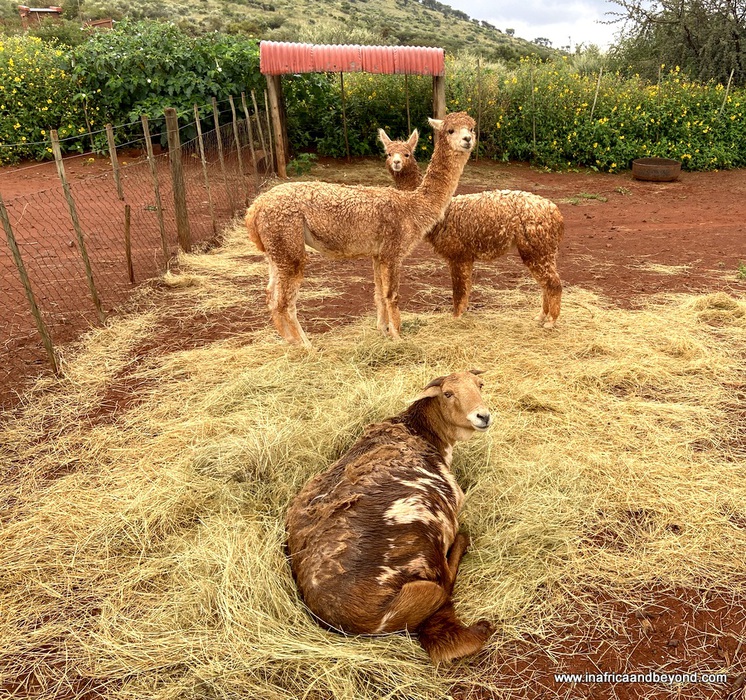 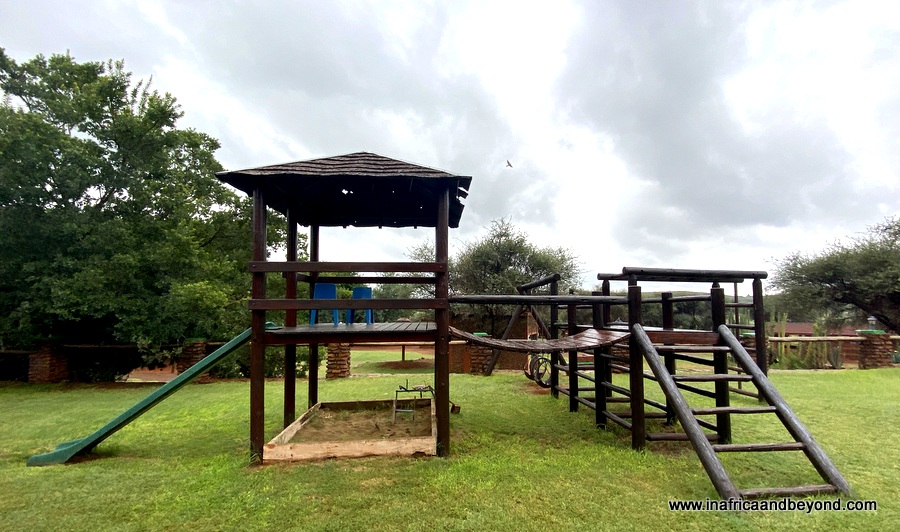 There are three accommodation options to choose from including 16 thatched-roof rondawels (round huts) consisting of 2 and 3-sleeper units and 16 self-catering, 2 and 4-sleeper chalets, both with views of the hills and the valley. The larger units are ideal for families. The third option is the camping and caravan sites set among the camel thorn trees. 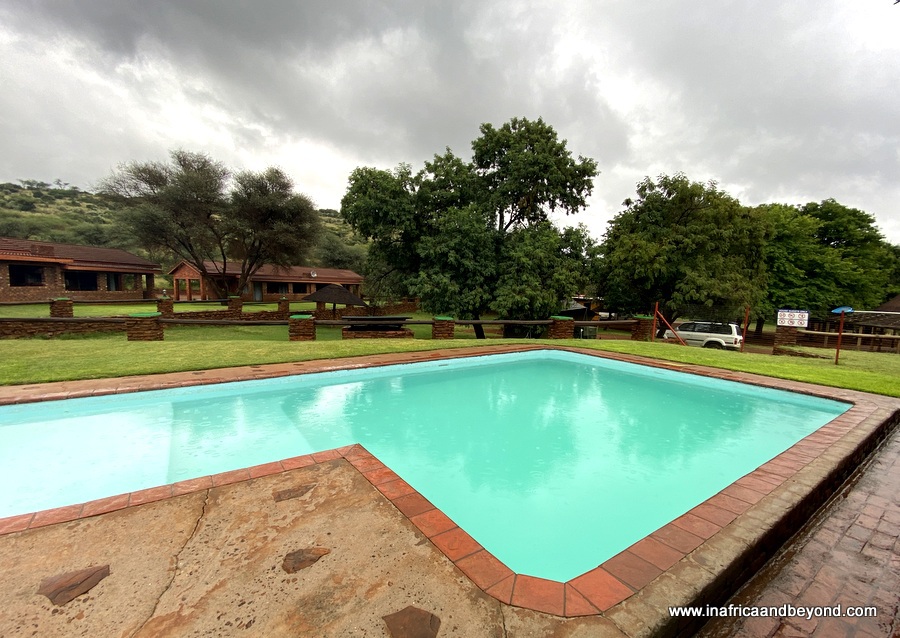 We stayed in a spacious, airconditioned en-suite rondawel. It had a queen bed for us, a single bed for my son, satellite TV, a couch, table, chair and a small fridge. Beverages were provided. 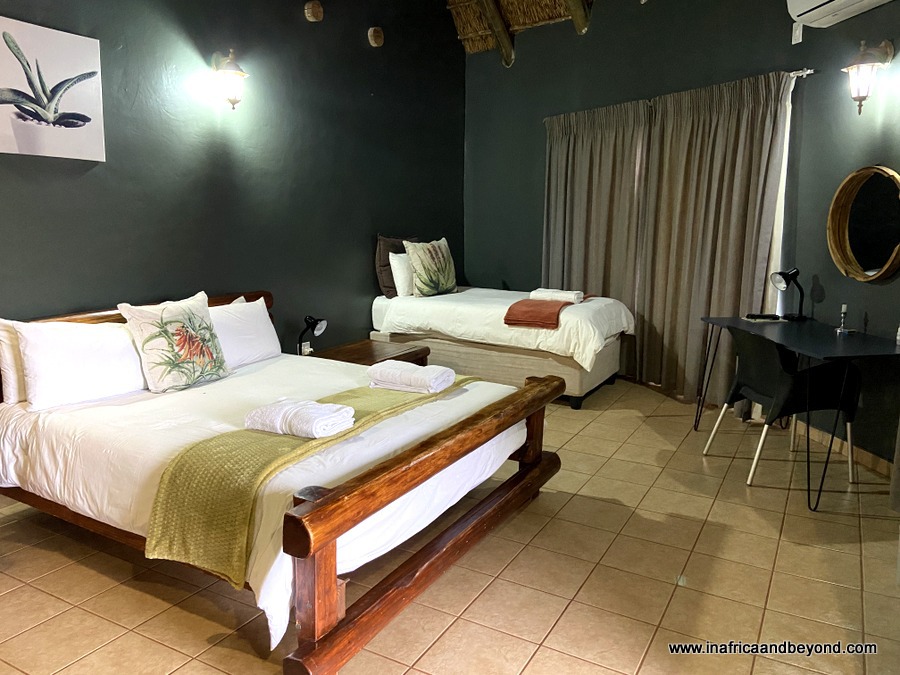 Meals are served in the popular country-style Kaufmann’s Kitchen. We had a hearty breakfast there, while Elma, our hostess, gave us helpful advice regarding the attractions in the area. 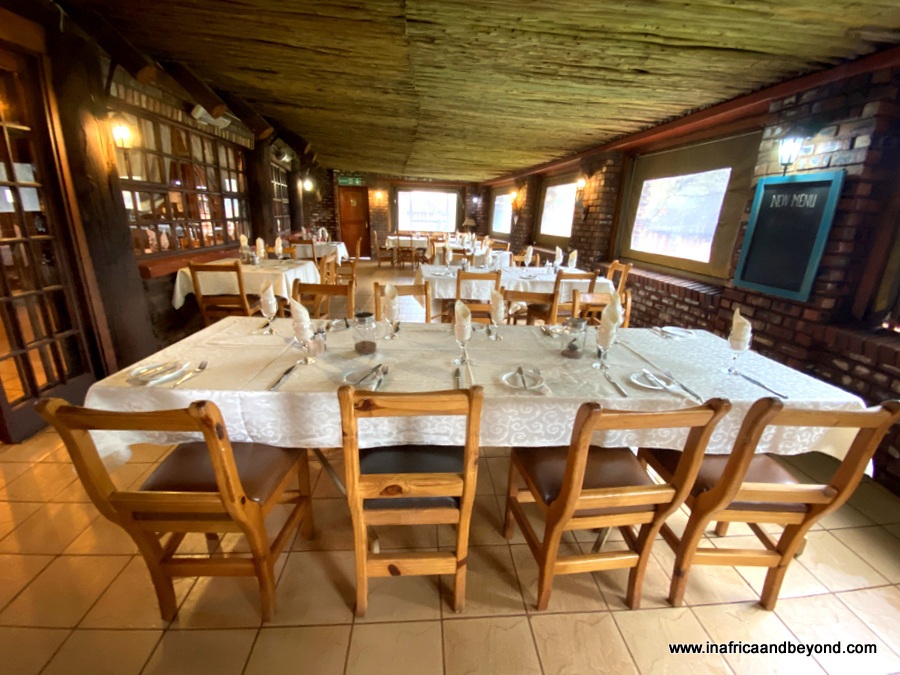 Kuruman lies on the Go! Ghaap Heritage Route. Known as the “oasis of the Kalahari”, it is home to the Eye of Kuruman, one of the biggest natural springs in the southern hemisphere, which supplies around 20-million litres of fresh water daily to Kuruman. A natural source of potable water, it is a lifeline for animals, plants and people in the area. 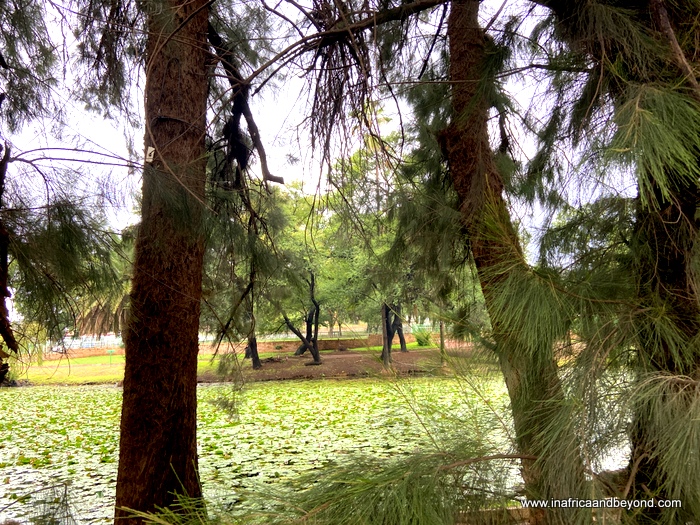 Another attraction is the Moffat Mission museum, which was built by the 19th-century missionary Dr Robert Moffat. His daughter Mary, got married to explorer David Livingstone, of Victoria Falls fame, in the church there and it was subsequently declared a national monument. 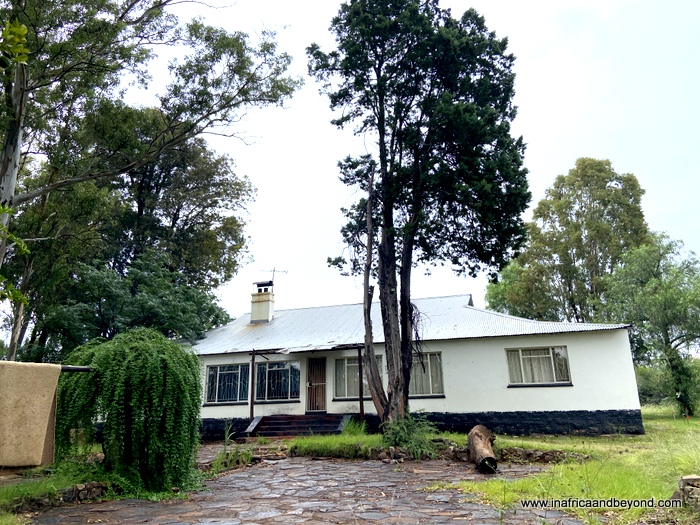 Unfortunately, the town of Kuruman has an unsavoury reputation as a high crime area. Although we did not have any issues, we heard about several incidents where others were targeted so be careful when visiting the attractions in town. Fortunately, Red Sands Country Lodge is situated 15 km away from the town in its own sanctuary.

We spent one night at the lodge thinking of it as a stopover point en route to Namibia, Augrabies National Park or Namaqualand but it wasn’t enough and we realized that it was a destination in its own right. We plan to return one day to do justice to it. 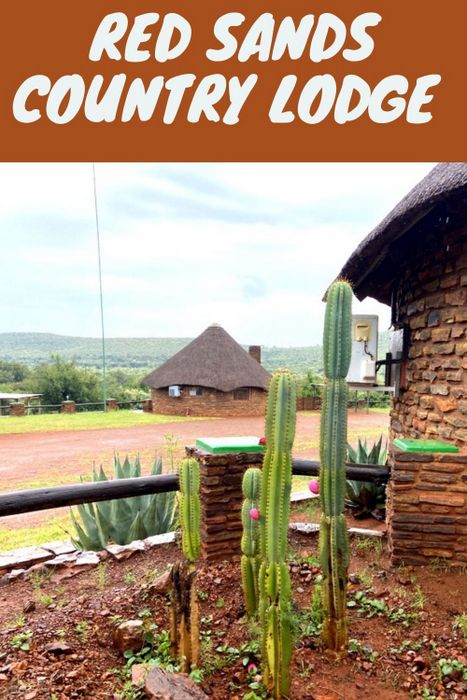 Red Sands Country Lodge is around 6 hours from Johannesburg and under 3 hours from Kimberley.