Walking Tour of the Bo-Kaap in Cape Town 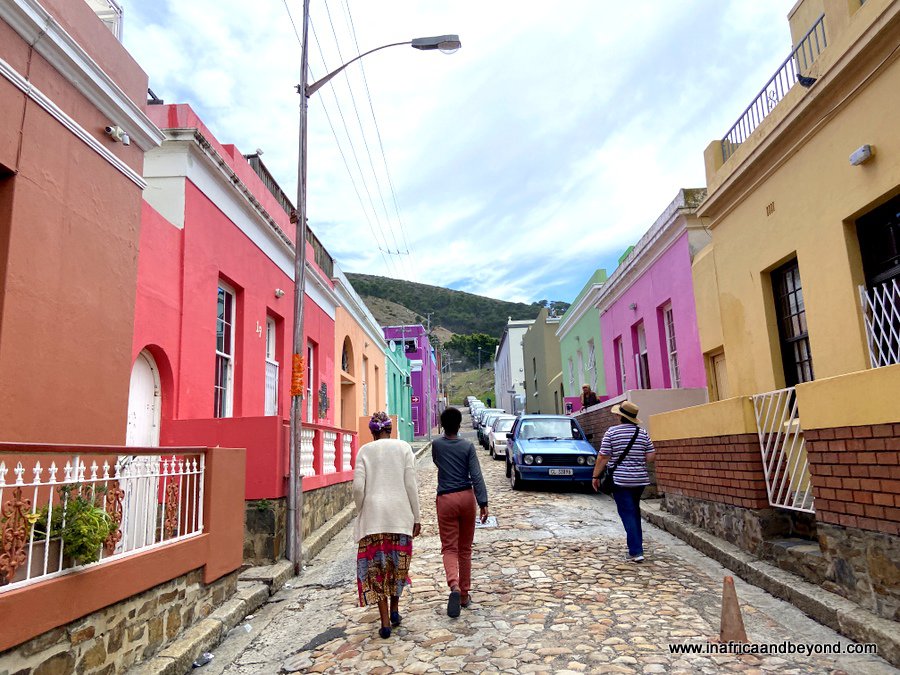 If there's one place that I must visit every time I go to Cape Town , it's the Bo-Kaap. I'm ever so fascinated by this historic, colourful district, which is always a sight for sore eyes. On my most recent trip to the Mother City, I did a walking tour in the Bo-Kaap with Walk Cape Town and learnt so much more about the area. 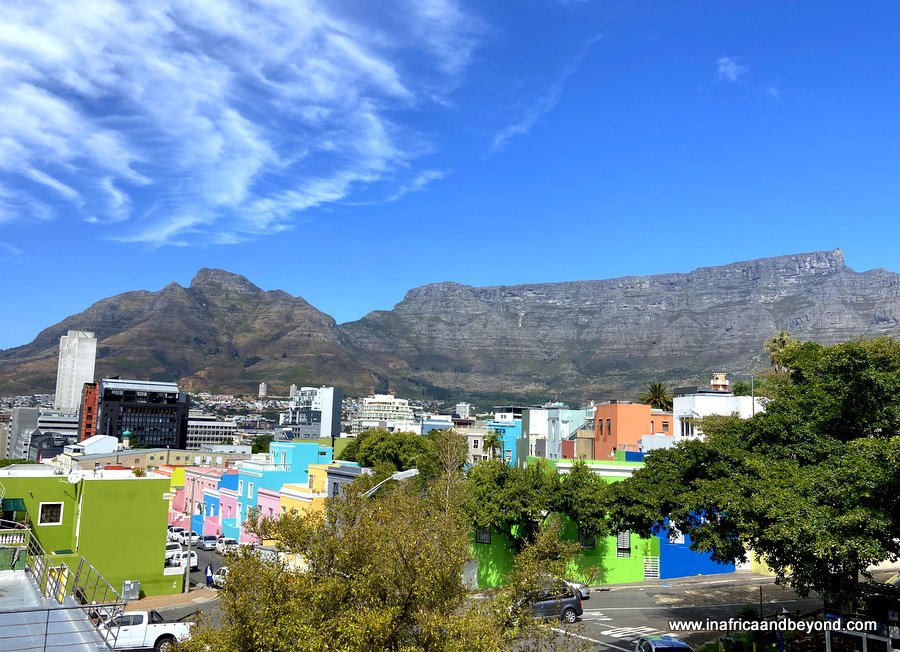 Guided walking tours to the Bo-Kaap leave from the City Sightseeing Bus offices in Long Street daily. That’s where we met our local guide, Sheldon, and began the tour. Our group of about a dozen people were from Nigeria, Germany and Switzerland. There were also other South Africans like us. 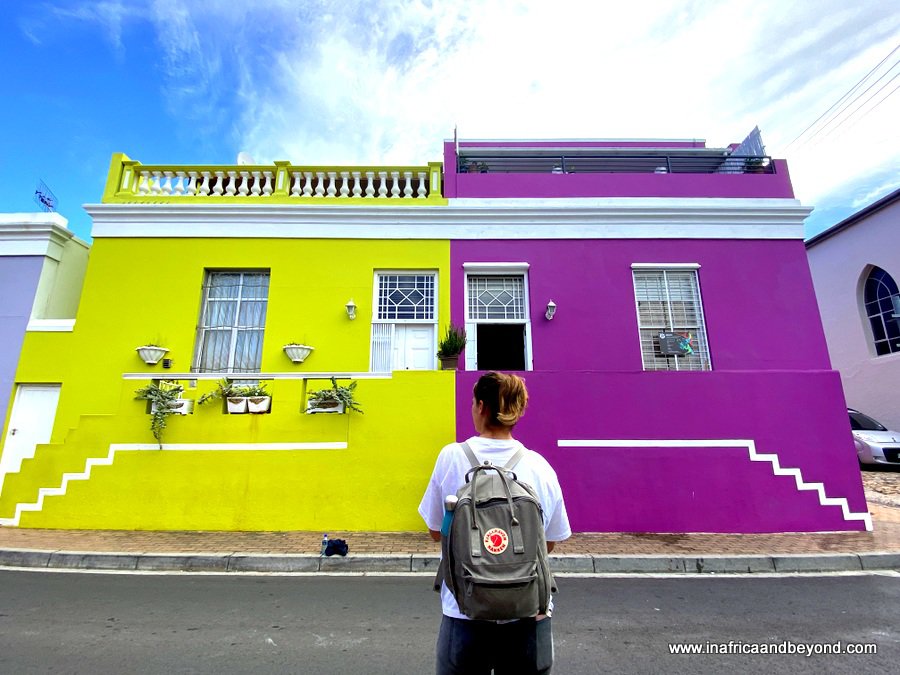 En route, Sheldon pointed out the Jan De Waal house on Bree Street. Originally from Amsterdam, Jan who was a church sexton, built the first houses in the Bo-Kaap which he subsequently rented out to the slaves. They were known as huurhuisies (rental houses). 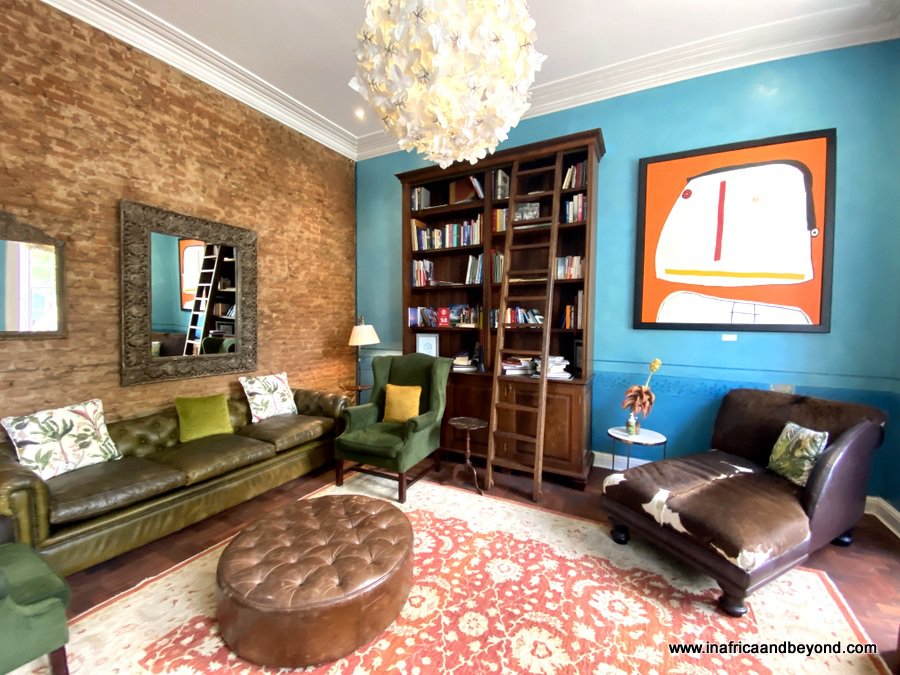 We then stepped into the Cape Heritage Hotel located in Heritage Square. Historic features such as original walls and windows can still be seen in the hotel, alongside murals depicting the history of the square and Cape Town. The hotel houses the Sisonke Gallery which was created to promote upcoming young artists, as well as some eateries and shops. The central courtyard is shaded by South Africa’s oldest grapevine which was planted in 1771 and still bears fruit! 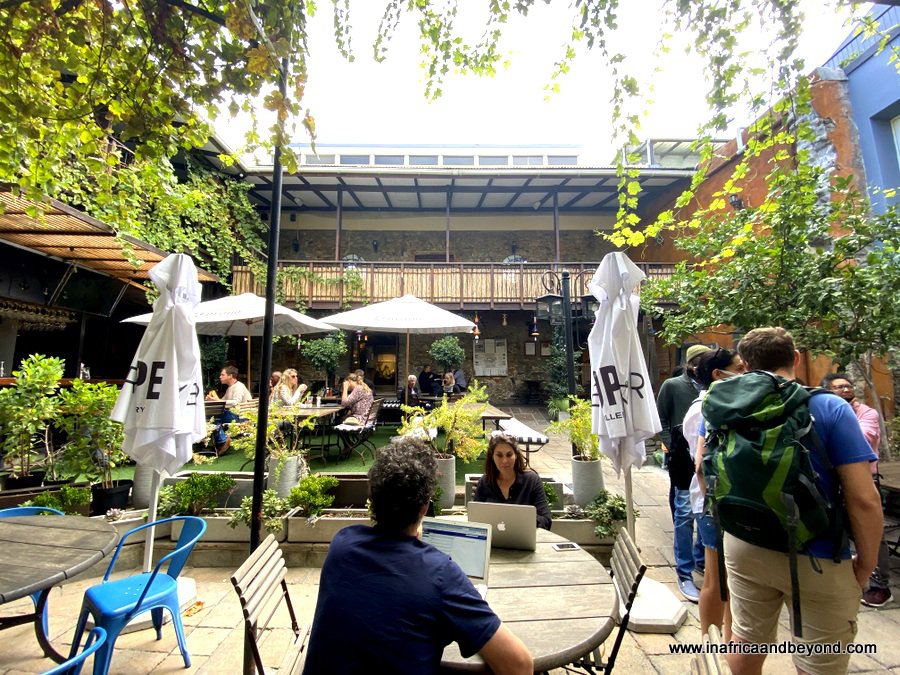 From there, we proceeded to the Bo-Kaap, walking up the cobbled slopes while Sheldon told us about the history, culture and traditions of the area, as he pointed out the best photo spots. 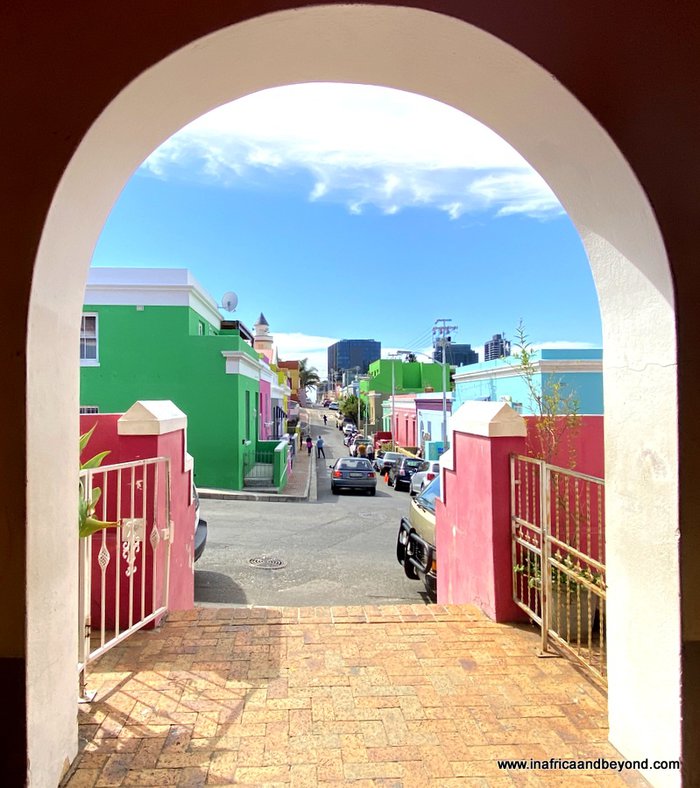 View from the arch

Lying on the lower slopes of Signal Hill, the name Bo-Kaap means “above the Cape”. It was previously known as the Malay Quarter. Unlike the multi-coloured houses that line its narrow streets, attracting tourists and photographers from far and wide, the Bo-Kaap has a somewhat dark history. 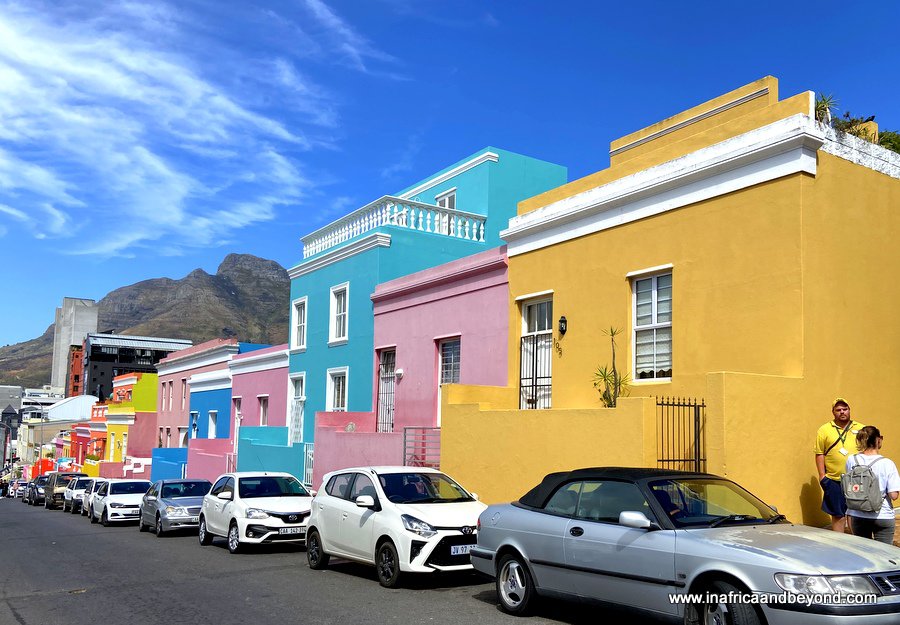 It was first established in 1760 as a slave quarter, and many of the current residents are descendants of these slaves, who were brought to the Cape by the Dutch in the 16th and 17th centuries from Malaysia, Indonesia, as well as other Asian and African countries. There were traders, religious scholars, skilled craftsmen, artisans and convicts too. They brought their religion, cuisine, culture and language with them. I realised this to a great extent when I visited Malaysia and heard words being used that I normally associate with the Cape Malay community. 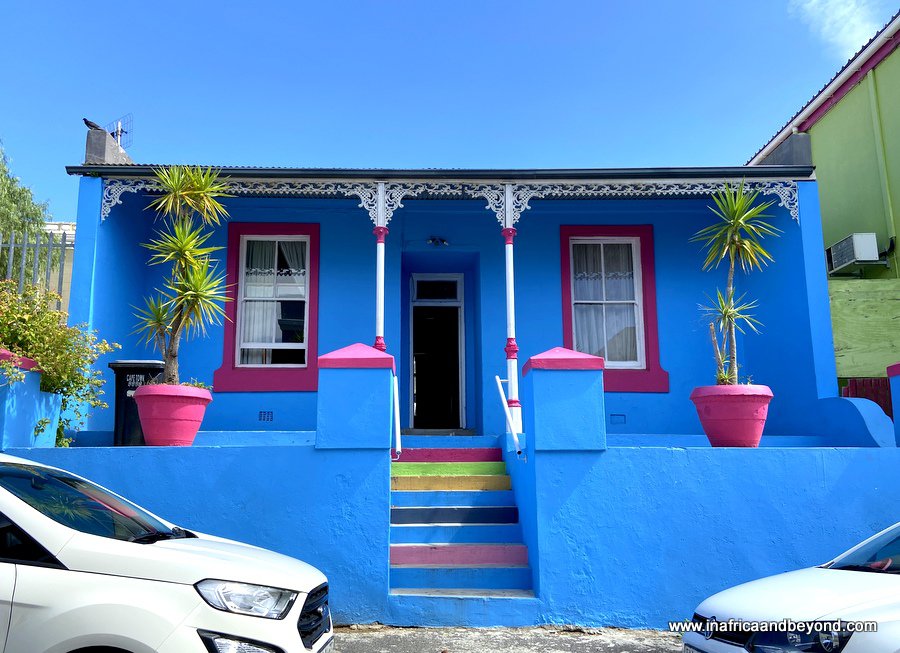 Most of the Bo-Kaap houses were built before 1860 and reflect a mixture of Cape Dutch and Cape Georgian architectural styles. The oldest house there still in its original form, is now home to the Bo Kaap Museum where you can learn more about the history of the area. It was built by Jan de Waal in 1768.

The houses of the Bo-Kaap are painted in vivid shades of vibrant colours, making the Bo-Kaap one of the main attractions in Cape Town, mainly due to its Instagrammability. There are several theories about the origins of the rainbow colours but the most popular one seems to be that residents were previously restricted in the colours they were allowed to use and when this rule was finally lifted they painted their houses in bright, cheerful colours to express their joy and newly-found freedom. They often re-paint their houses in celebration of Eid or other special occasions, and usually after consulting with their neighbours, to avoid clashes. 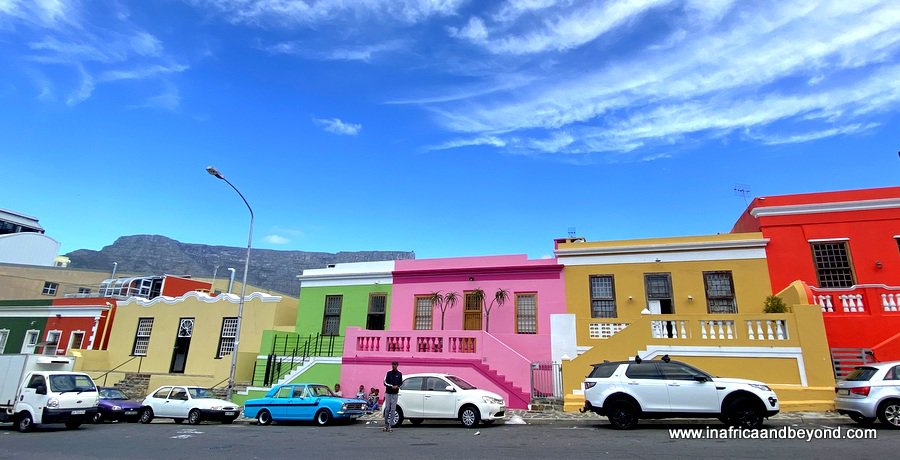 In between the streets of colourful houses, you will see walls with brightly painted murals. 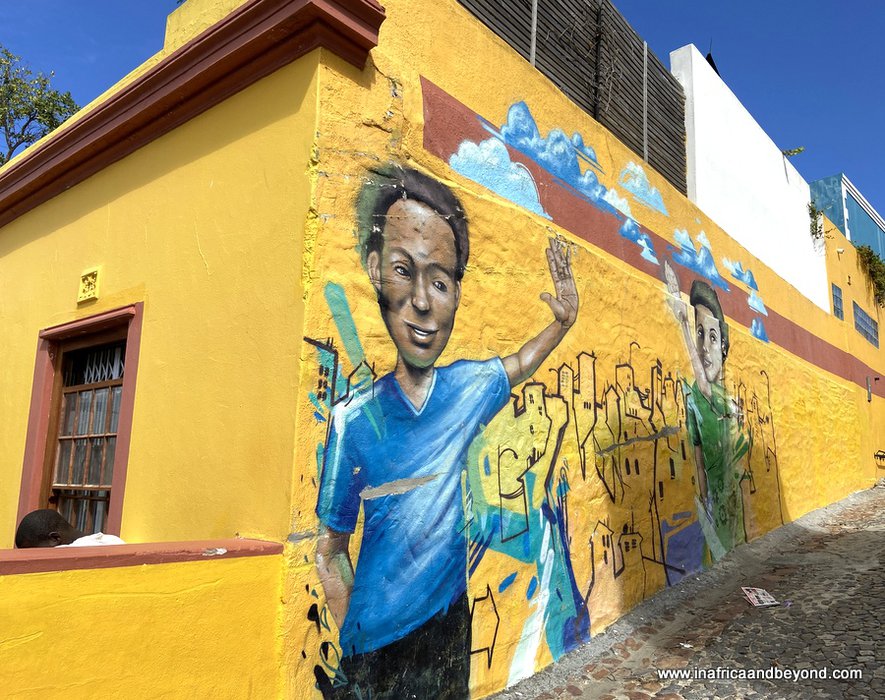 Cape Malay cuisine is unique and includes delicacies like koeksisters, boboties and bredies. Many of the residents offer cooking experiences in their homes. Faeeza’s Home Kitchen is one of them. Faeeza also has a tea garden which has hosted celebrities like Prince Harry, Meghan Markle, and Roger Federer. Other popular local eateries are Biesmiellah Restaurant, Bo-Kaap Kombuis, and Against The Grain. 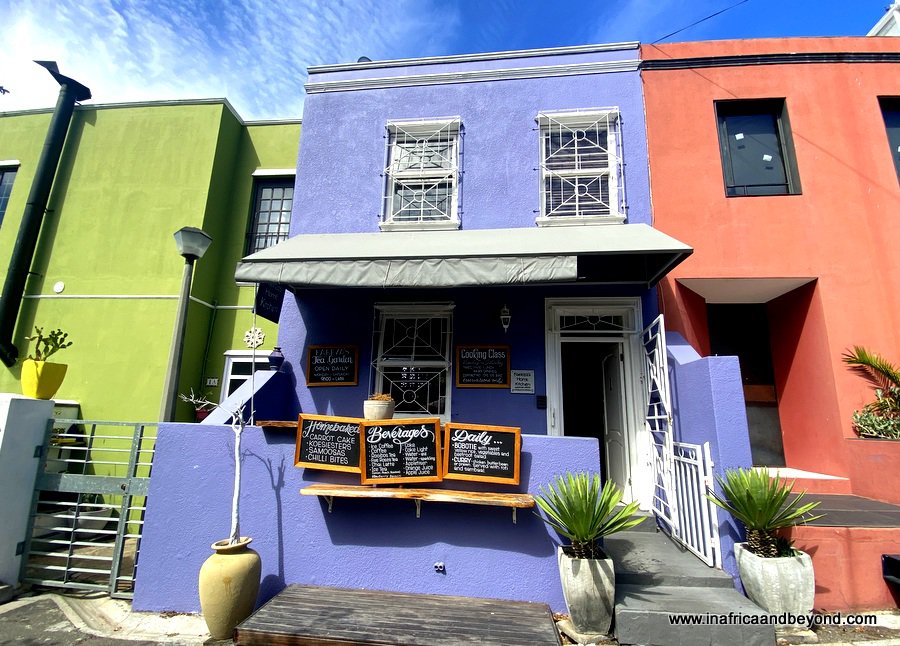 The Bo-Kaap is predominantly Muslim and there are 10 mosques there, the oldest being the Auwal (First) Mosque which was built in 1794. Inside the mosque, there is a Quran handwritten from memory by Tuan Guru, an Indonesian prince who was incarcerated on Robben Island long before Nelson Mandela. He was the first imam of the mosque. Built in 1820, the Palm Tree Mosque is the second oldest Mosque in the Bo Kaap. The 5 palm trees outside the mosque represent the 5 pillars of Islam. 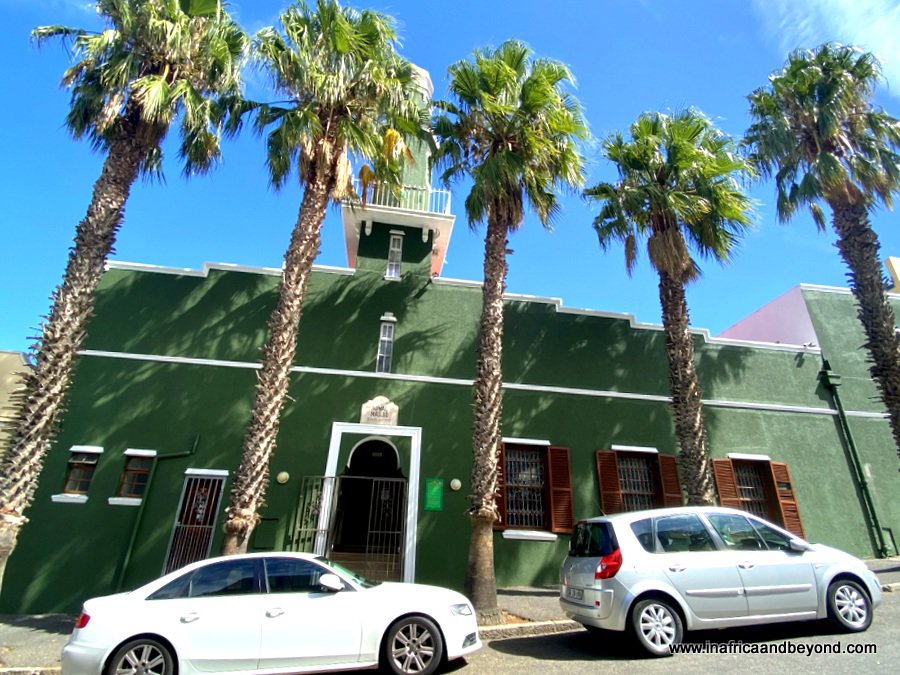 Recently, Bo-Kaap residents have been fighting against gentrification, price hikes and evictions, which is threatening the heritage of the area.

We walked back to the City Sightseeing offices, after a thought-provoking walk. The tours are free but tipping is recommended. We’ve done them in several countries and they’re well worth the tip, as the tours are normally given by local guides with in-depth knowledge and inside information about the area. I would highly recommend doing the City Sightseeing Bus tour to see the rest of the city.

Where to stay in the Bo Kaap

If you want a luxury stay in the Bo-Kaap, the Hyatt Regency Cape Town is ideally located at the beginning of the Bo-Kaap district, close enough for one to immerse oneself in the culture and colour of the neighbourhood but not enough to encroach on its ambience.