10 Best Things to do in Seville 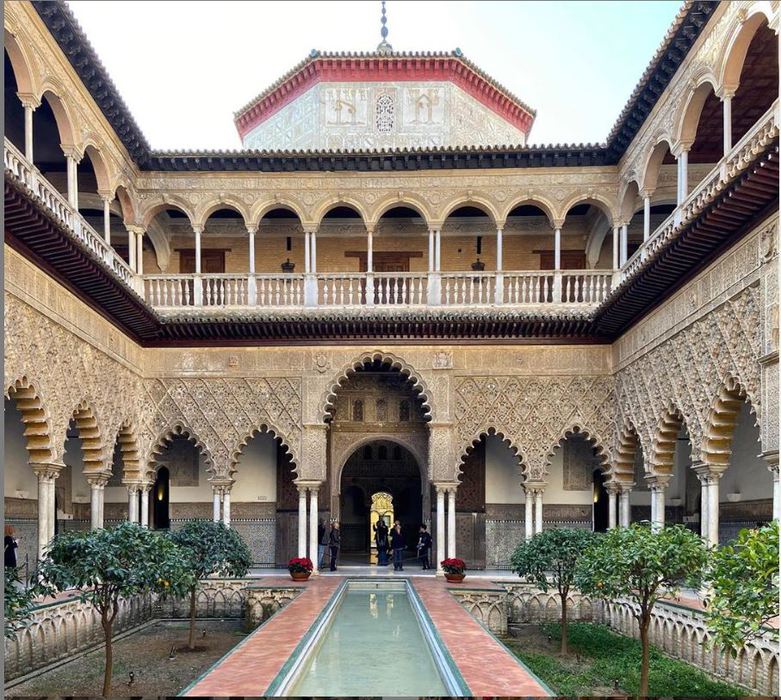 Looking for the best things to do in Seville , Spain ? Read on...

“The air soft as that of Seville in April, and so fragrant that it was delicious to breathe it.” Christopher Columbus - Journal of First Voyage to America (ed. 1924)

Seville or Sevilla (pronounced Sehveeya) as the locals call it, is synonymous with orange trees, which are as much a part of its landscape as its unique architecture and colorful azulejo tiles. First emerging in December, the oranges are followed by sweet-scented white blossoms in March and April, filling Seville with an ambrosial fragrance. Neroli, an essential oil with anti-depressant properties, is extracted from these blossoms. The fruit was first introduced to Europe by the Arabs in 1000 AD. Today Seville has more than 14,000 orange trees, yielding bitter oranges known across the world as “Seville Oranges” which make excellent marmalade.

We visited Seville in December when the buzzing streets were decked in festive lights and the trees were decked with oranges. The air was perfumed with a light and pleasant citrus scent. It was our last stop in Spain before we headed North to Portugal.  We discovered that there was much more to Seville than oranges – even though I couldn’t resist photographing these trees constantly! 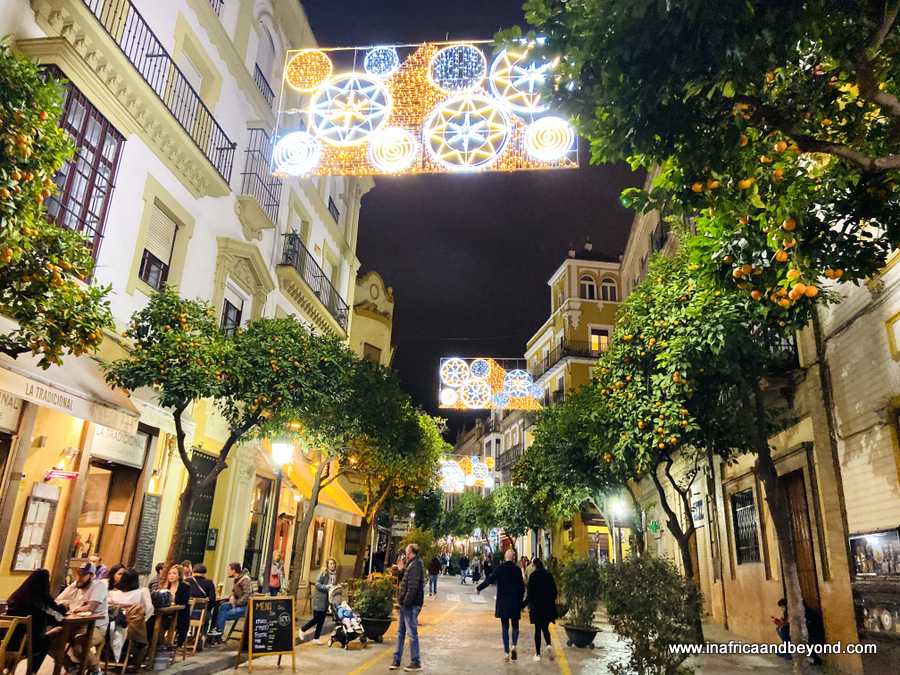 Lonely Planet’s top city to visit in 2018, and the capital of Spain’s Andalusia region, Seville is a charming city. Its fascinating old town consists of a labyrinth of narrow cobblestone alleys, historic buildings and monuments. In the 16th century, it was known as the gateway to the New World. Renowned explorers like Christopher Columbus, Ferdinand Magellan and Amerigo Vespucci, sailed from Seville’s river harbour, going on to discover ample sources of gold, silver, tobacco and cocoa around the world. These days, it is a popular destination for a family-friendly vacation, with free admission for children to many of the major attractions. Here are the 10 best things to do in Seville 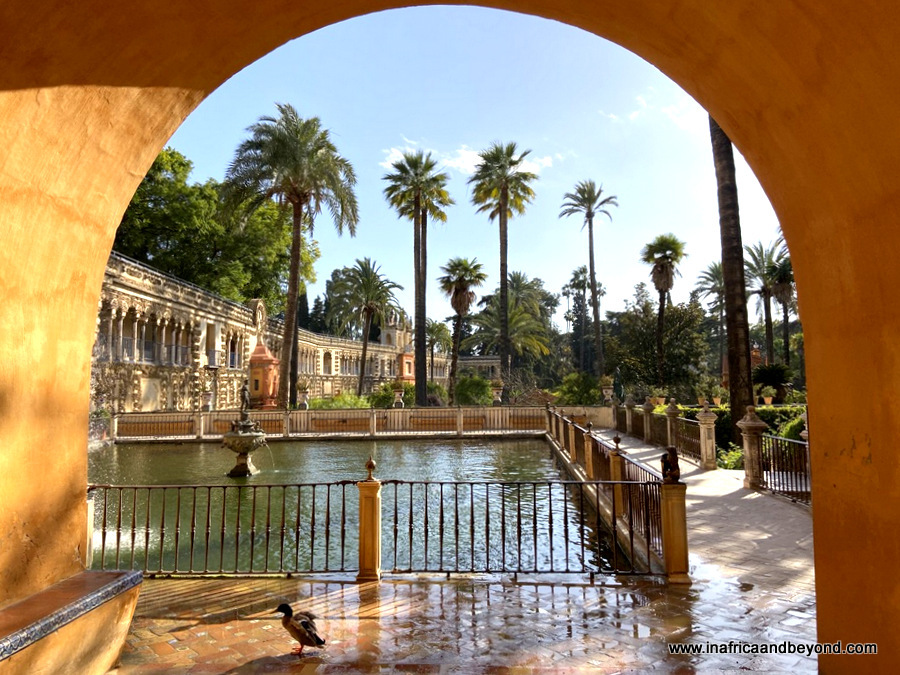 This majestic UNESCO World Heritage site is the oldest royal palace in Europe that is still being used - the Spanish royals stay here when in Seville. The complex dates back to the 10th century and was used as a setting in movies like "Lawrence of Arabia" and "Kingdom of Heaven". More recently, it was featured as the Water Gardens of Dorne in Game Of Thrones.

Much of the beautiful Mudéjar (a blend of Moorish and Gothic influences) architecture was inspired by the Alhambra in Granada.  I was looking forward to seeing the famed gardens but unfortunately they were closed on the day we visited because rain was predicted. Nevertheless, we managed to get a glimpse through the gates, and the rest of the palace was impressive too. If you are visiting in peak season, it would be advisable to book your tickets in advance. We visited in December in the early afternoon, and there was no queue.

You can visit the Real Alcazar free during the last hour on Mondays, although if it is your first visit there and the gardens are open, then you will need at least two hours.

2. The Seville Cathedral and the Giralda Tower 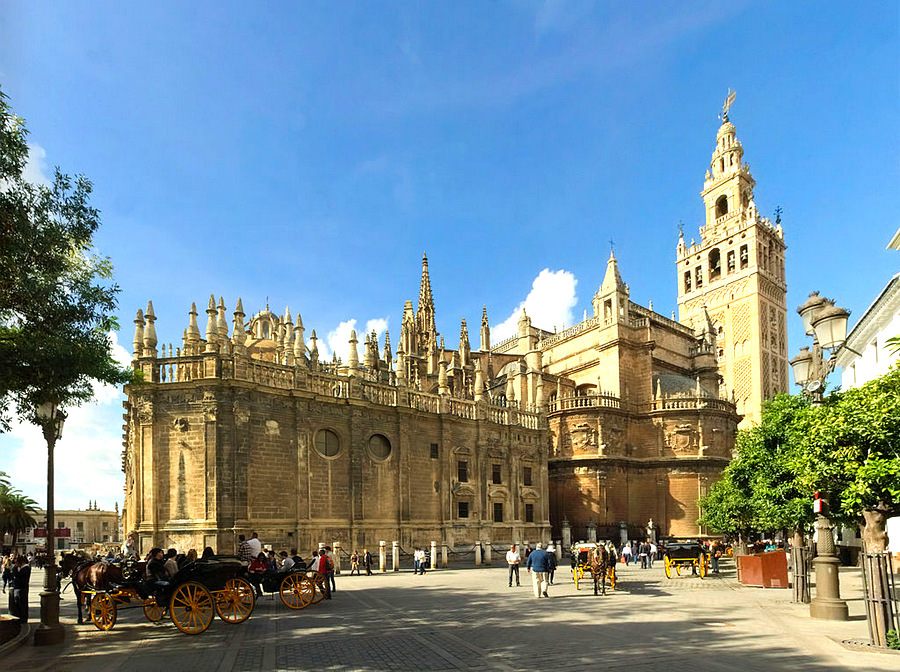 This is the largest Gothic church in the world and the third largest church in the world, as well as a UNESCO World Heritage monument. Originally the site of the great mosque of Seville which was built in the 12th century, the colossal Cathedral was built in the 15th century. Parts of the old mosque still remain, such as La Giralda bell tower, which was once the minaret, and the orange tree courtyard, which once served as the ablutions courtyard.

Many members of the royal family are buried here. Christopher Columbus’ coffin is also in the Cathedral, although there is some controversy around this. It is elevated off the ground as the explorer once said that he would be buried in Spain over his dead body.

La Giralda was inspired by the Koutoubia Mosque in Marrakesh, and dates back to 1184. There are beautiful views from the top. Interestingly, to get to the top, there are not steps, but ramps, so that the muezzin could ride up on his donkey or horse to give the call to prayer.

You can visit the Seville Cathedral for free on Monday afternoons between 16:30 and 18:00 but this is limited to 70 visitors. It is essential to reserve your ticket online. 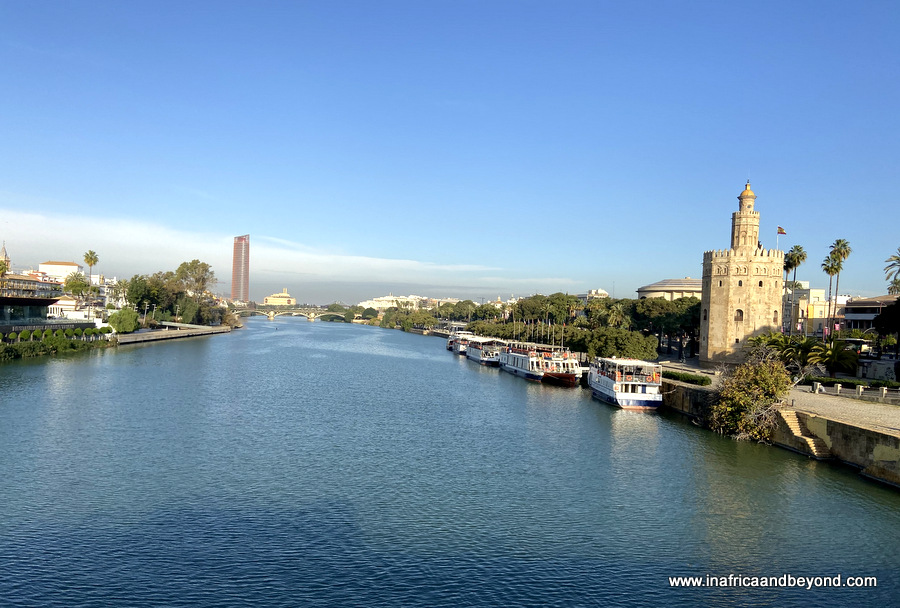 This is a defensive tower on the Paseo Cristobal Colon which borders the Guadalquivir River. Built in the 15th century, the origin of the tower’s name is not certain. Some sources believe that it was once covered in gilded tiles while others believe that it was used to store gold looted from the Mayans and Incas. It is now home to the Naval Museum. We walked along the waterfront promenade alongside the tower and relaxed on the many benches there, as we enjoyed the views across the river. 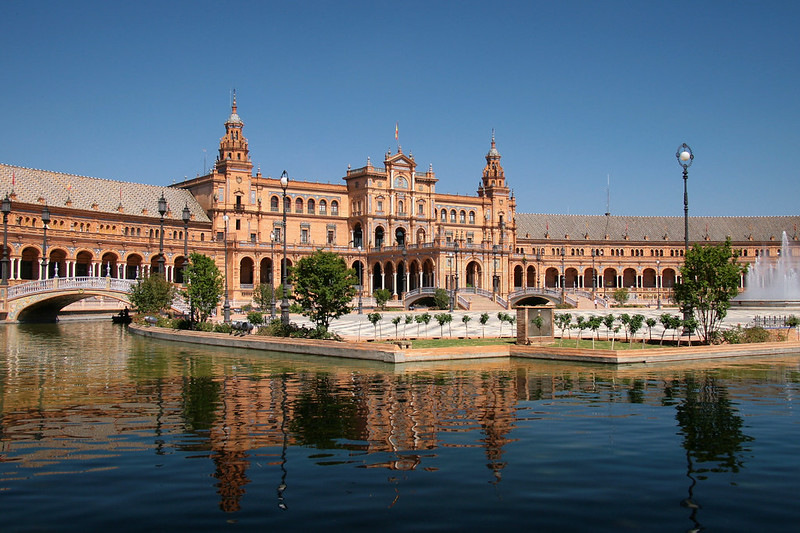 This is a grand Renaissance/neo-Moorish style building in the Maria Luisa Park. It is built in a semi-circular shape to symbolise Spain embracing its former American territories. There is a tower at each end and a canal crossed by four bridges in front of the building. The four bridges represent the four ancient kingdoms of Spain: Aragon, Castille, Leon and Navarre. You can rent small rowing boats on the canal or go for a horse and carriage ride in the park. The Plaza is closed during bad weather, so if you’re unsure whether it will be open, it is best to call ahead and find out. 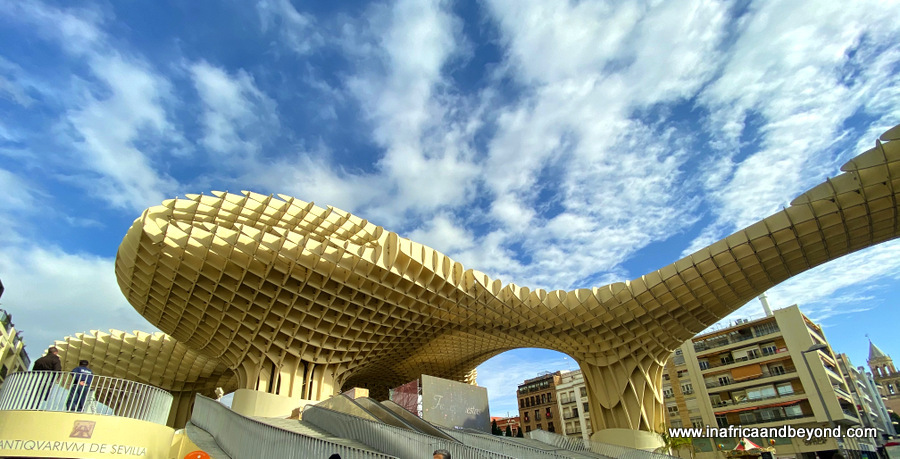 From the old to the (relatively) new… Built in 2005, the Metropol Parasol is the largest wooden structure in the world.  Known locally as Las Setas (The Mushrooms), due to it's quirky shape, it has four floors spanning a width of 150 metres and a height of 26 metres. There is a market on the first floor and a museum displaying Roman and Moorish ruins found during construction, on the ground floor. Winding walkways take you around the structure. We went to the viewpoint at the top to get 360-degree views of the city. 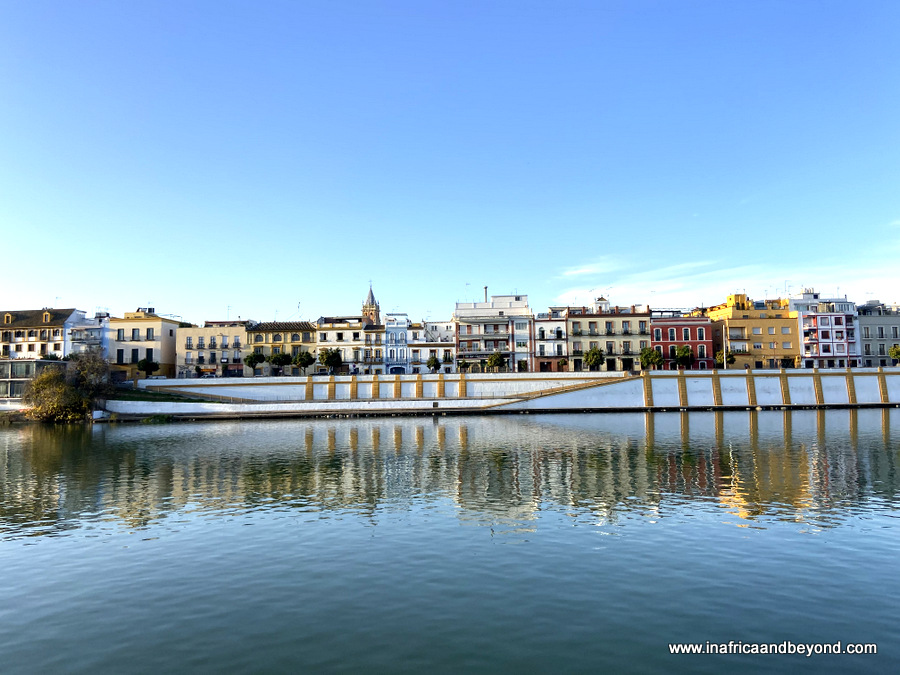 Triana is a beautiful bohemian neighbourhood, considered to be the birthplace of flamenco. Traditionally populated by sailors, gypsies, bull-fighters and flamenco dancers, it is separated from the rest of Seville by the river. There are fewer tourists here so you can mingle with the locals, as you shop at the food market, and admire the flower-filled patios, ceramic tiles and the historic structures. 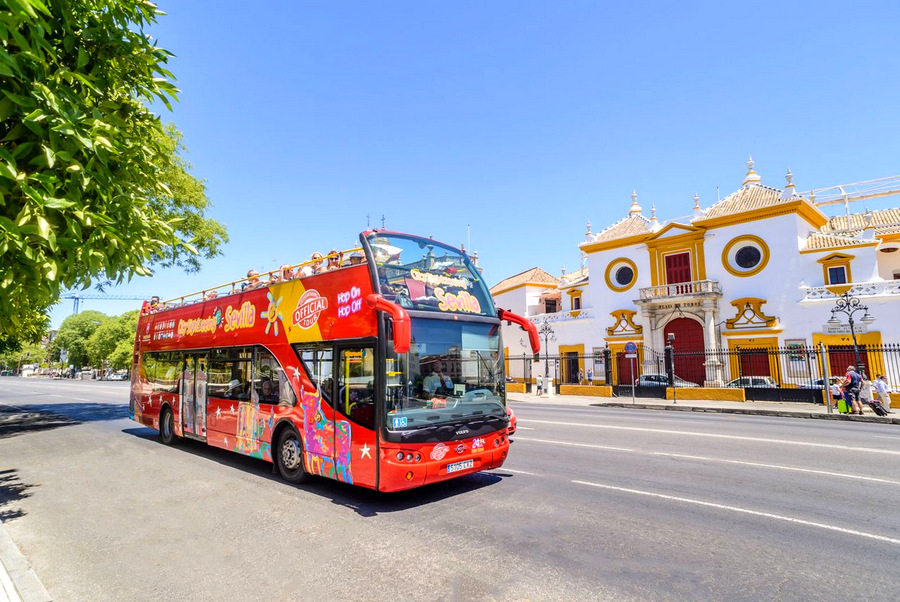 We used the City Sightseeing Bus to get an overview of the city and see its main sights. There are 14 stops on the route. The bus ticket includes 4 guided walking tours and free tickets to several attractions. Audio commentary is offered in 16 languages. Apart from the attractions listed here, we also saw the Torre Sevilla (Seville Tower) - the tallest building in Seville, which was designed by Cesar Pelli who designed the Petronas Towers in Kuala Lumpur, the Archive of the Indies and many other sights of Seville. Another attraction we passed was the Plaza De Toros de la Real Maestranza, a famous bull ring and bull-fighting museum. Although I don’t condone bull-fighting, I’ve heard that the museum is interesting.

If you have time and are travelling with kids, then visit Isla Magica, a theme park centred around 16th-century Spanish colonial adventures. It features seven areas circling a lake and includes a waterpark. Apparently, Tom Cruise hired the entire park for the day for his daughter Suri, while he was filming Knight and Day there in 2009. The park has both gentle and thrilling rides. Some of the most popular ones are: Iguazu, a high-speed water ride, El Jaguar, an inverted roller coaster, El Desafio, which has a 68-metre high free fall, and Rápidos del Orinoco, a river ride which involves rafting around an ancient Mayan temple.

If you have more time in Seville, then visit…

Italica is an ancient Roman settlement just 10km from Seville, dating back to the 2nd to the 4th century AD. Three Roman Emperors are believed to have been born here - Trajan, Hadrian, and Theodosius. Considered to be the best Roman ruins site in Spain, the third biggest Colosseum in the Roman Empire, with a capacity of 25,000 people, was located here. Italica served as the ancient Dragon Pit in Kings Landing, in the final season of Game of Thrones.

Cordoba is another enchanting ancient Andalusian city with picturesque flower-covered patios, cobblestone alleys, fountains and the grand Mezquita Cathedral. It can be visited as a day trip from Seville, although we stayed there for two nights before visiting Seville.

Other easy day trips from Seville , include Malaga, Cadiz, Ronda and Osuna.

How to get around Seville

Seville has an extensive public transport system comprising buses, trams, metros and trains. Taxis and Cabify services are available too. We used Cabify to get to the bus station when we were leaving Seville and the City Sightseeing Bus to visit the main sights.

Where to stay in Seville 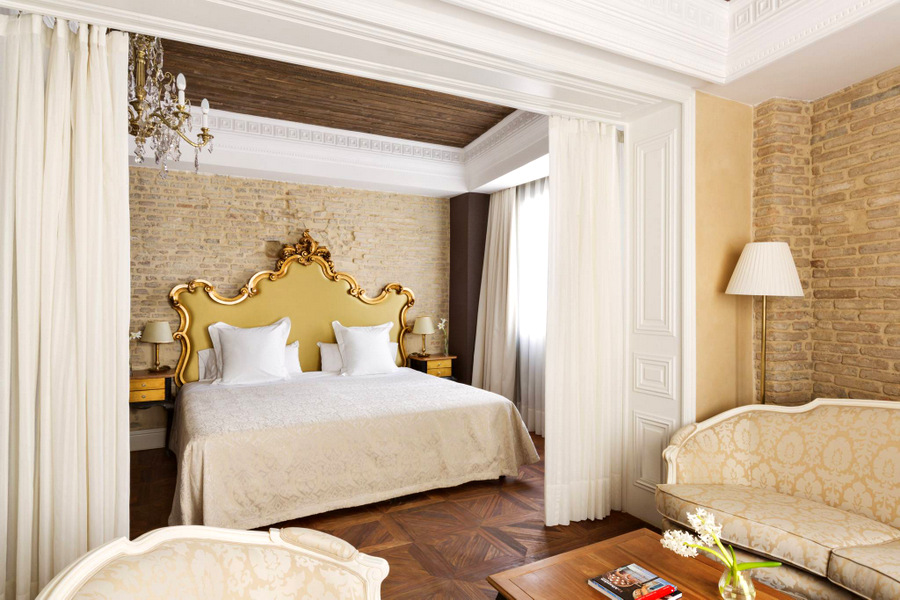 Hotel Casa 1800 is a beautiful Andalusian-style boutique hotel in the Old Town, close to the Cathedral and the Alcazar. Built in 1864, it has just 33 elegant rooms ensuring exclusive service. Some of the rooms have access to an outdoor jacuzzi and marvellous views of the Giralda and the Cathedral from the terrace. Complimentary afternoon tea is served daily, and we were invited to enjoy the delicious spread and tour the hotel, even though we were not resident guests at the time.

Have you been there? What are your favourite things to do in Seville ? 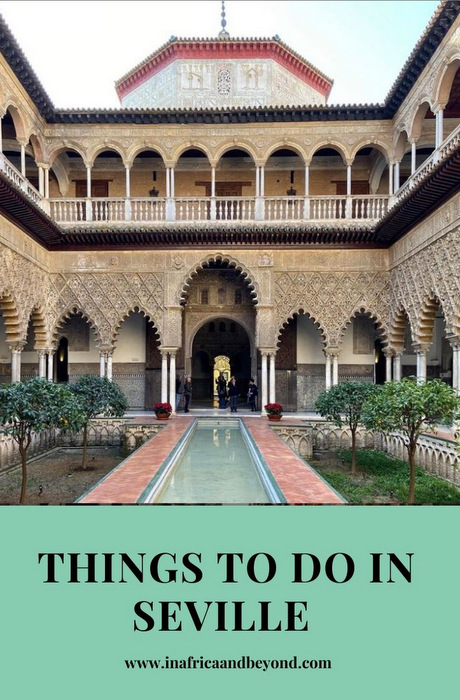 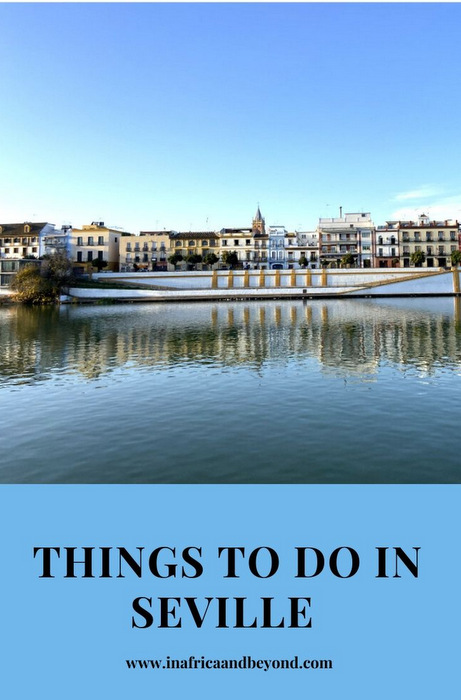 One comment on “10 Best Things to do in Seville”