The Orient Hotel and Restaurant Mosaic 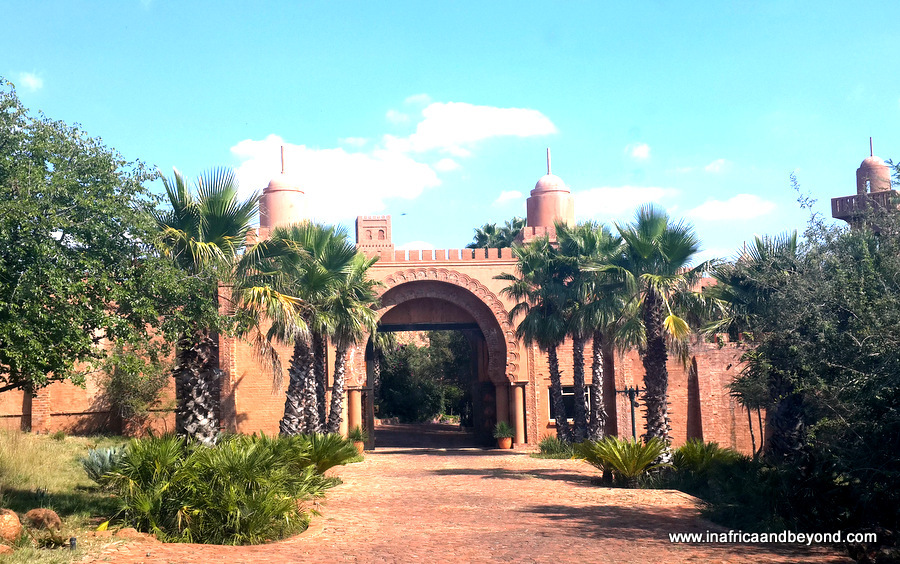 The Orient Hotel and Restaurant Mosaic

A short drive away from Pretoria, ensconced in a 280 hectare nature reserve, stands a Moorish-inspired marvel rising like a mirage above the trees. As you enter the gateway leading to the palace-like structure, you leave the real world behind and enter a world of fantasy and make-believe, a world of Aladdin’s carpets, Maharajahs’ beds, and Arabian nights. This is the Orient Hotel , an intimate 5-star boutique hotel rich with treasures from places, exotic and exciting. 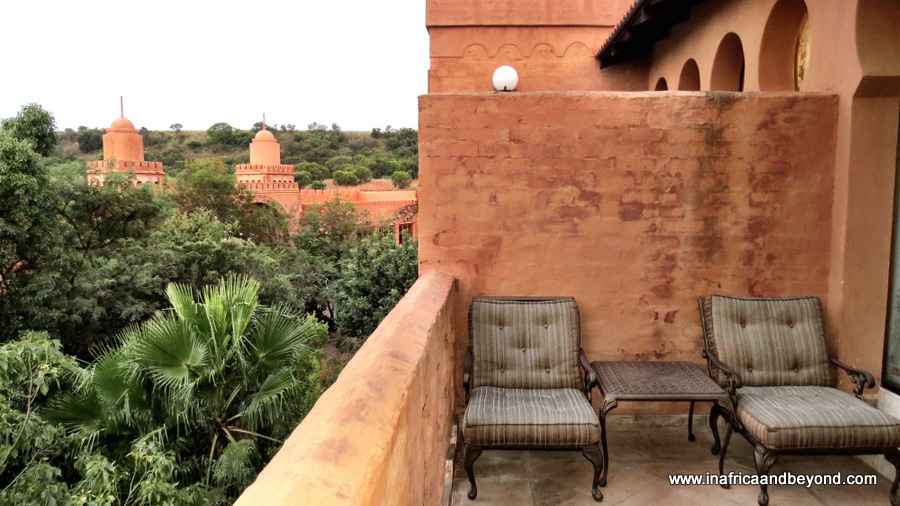 Opened in 2006, the hotel and Restaurant Mosaic have been featured on Top Billing and other television shows and gushed about in abundance, in print and electronic media. It is the brainchild of Mari Dartnall, her daughter Chantel and her husband Cobus Du Plessis. The décor is inspired by their many travels over the years and many of the striking features of the hotel are original antiques from the East that have found new homes in The Orient. Mari expertly runs the hotel and Chantel is sovereign of the culinary domain, for which she has won many international awards. Children under 16 are not allowed so The Orient Hotel is great for a honeymoon, an anniversary celebration or even for a small intimate wedding, providing a perfect backdrop to your wedding photos. 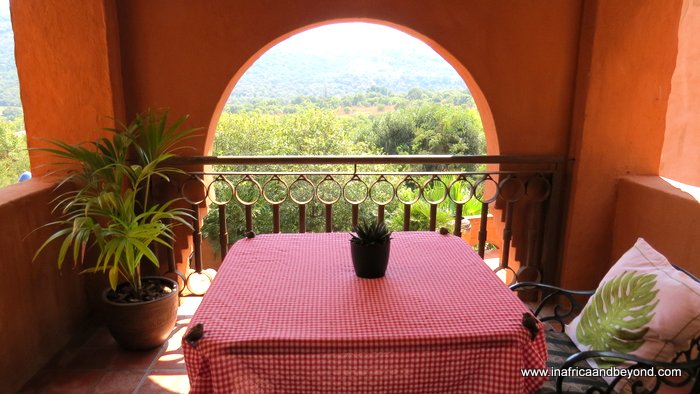 The hotel does not have a formal reception area. Instead, 220-year old massive Indian rosewood doors lead into an elegantly opulent entrance hall, with a Moroccan style lounge area, spiral staircases and a piano from colonial India. An amazing collection of artwork adorns the walls. We felt like king and queen of the castle. This was facilitated by the unobtrusive staff who are seen and heard only when needed. 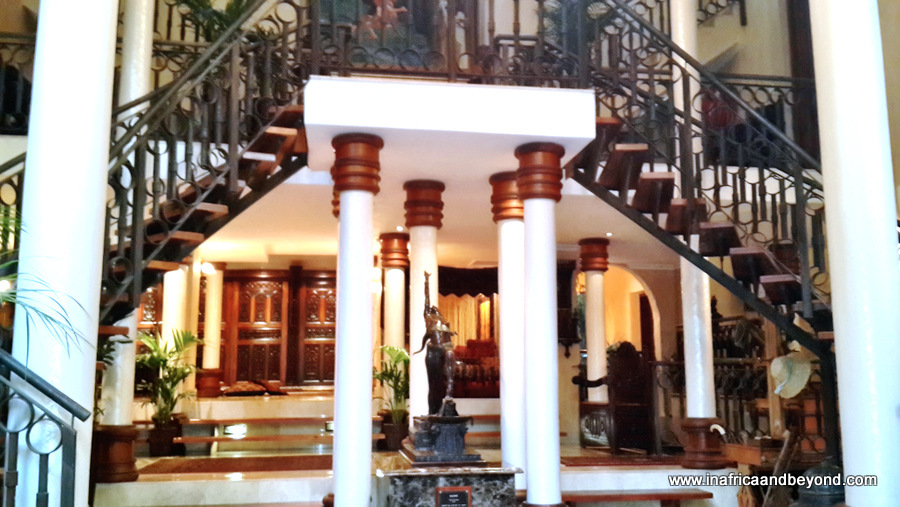 Our anything-but-humble abode for the night was the Constantinople suite which featured a lofty 300-year old Maharajah’s bed brought over from India, and an exquisite carved wooden swing in the lounge area. 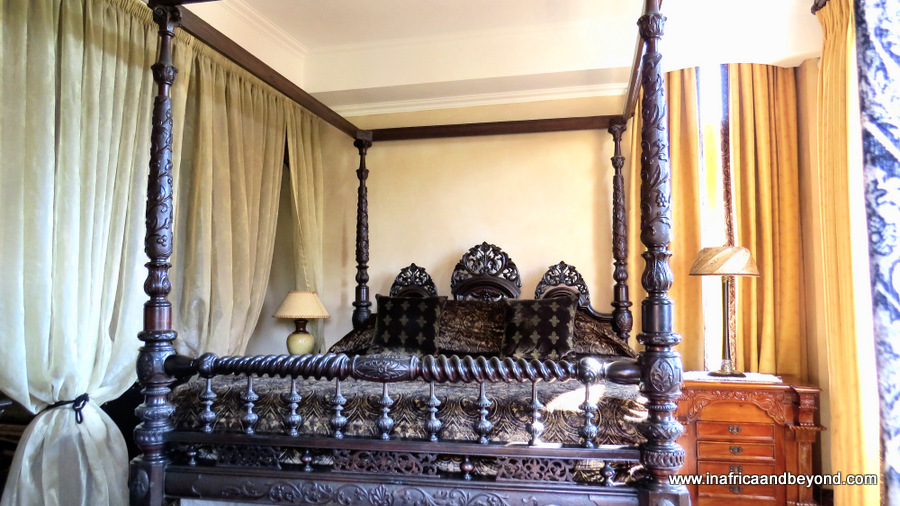 It was adjoined by a huge bathroom with a shower overlooking the reserve and a balcony with a spectacular view. An antique-styled working phone, Indian kurtas in lieu of towelling gowns, and Shanghai Tang toiletries complement the suite. There is a complimentary mini-bar and wi-fi but there is no TV, in the spirit of a bygone era. Instead you are provided with some thought-provoking reading material relevant to the suite you are staying in and a sound system with some Chopin, in keeping with the classical nature of the place.

There are nine suites in total. They vary in size and grandeur. Marrakech, Kashmir and Nineveh are some of the other extraordinary suites, each one a worthy representative of its namesake. 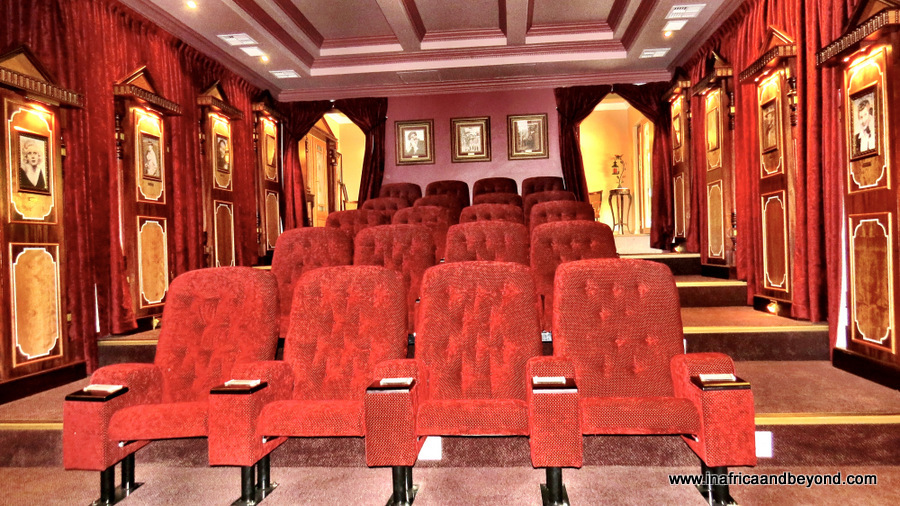 We were loathe to leave our luxurious suite but there was much more to experience. The Petit Alhambra is an elaborate private cinema adorned in rich burgundy carpets and velvet curtains. It is framed by pictures of screen legends and classic movie posters. The cinema seats 20 people in luxury and can be hired for private events.

A library with an extensive collection of old, new and rare books can be found above the restaurant and a museum featuring the work of sculptor Tienie Pritchard is also on the premises. A vintage Rolls Royce presides over the parking bays, adding to the regality of the surroundings. 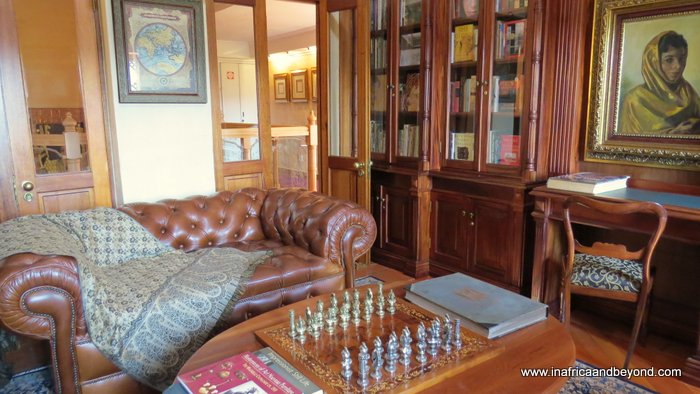 If you feel like exercising your limbs, don’t expect anything ordinary. Croquet, archery and boules are some of the activities on offer. You can relax on a swing in the perfectly manicured gardens or you can swim in the pool on the terrace with sweeping views of the Crocodile River Valley. 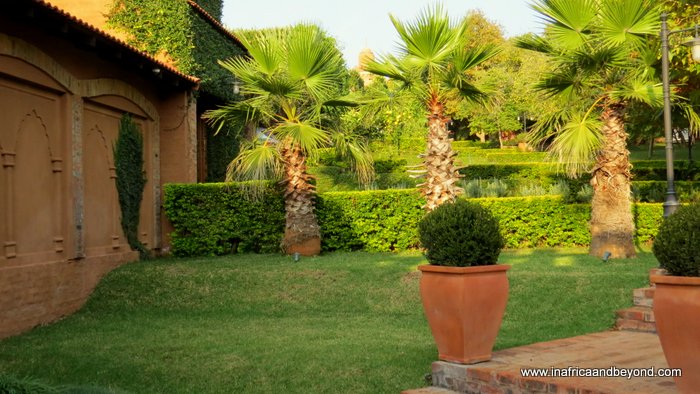 ounter the two giraffes that share the conservancy with zebras and other herbivores. We took an idyllic walk to the dam where we watched the ducks at play. The silence and tranquility of the surroundings was punctuated only by the calls of the indigenous birds observing us. 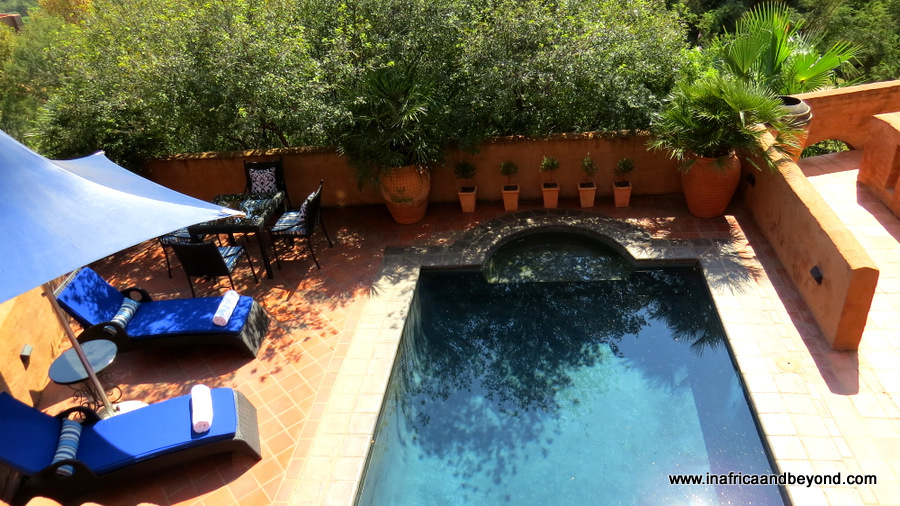 The acclaimed Restaurant Mosaic, around which the hotel was built, is headed by the award-winning Chef Chantel. Dinner at the restaurant is more of an event than a meal. Chantel has been called an epicurean enchantress and indeed, her culinary creations were enchanting. 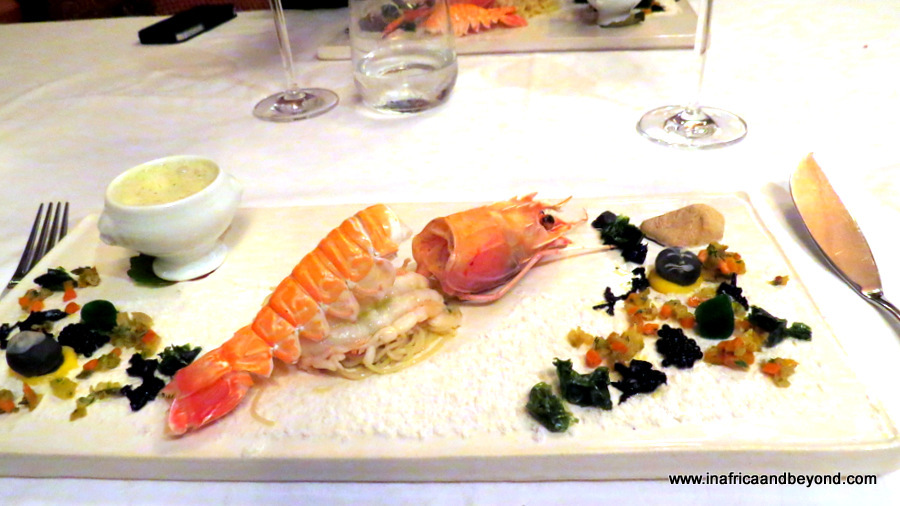 Most aptly described as “art on a plate”, the dishes combine European dishes with Eastern influences, hence the restaurant’s name Mosaic. Poetic appellations such as “Pebbles on the Beach” and “A Walk through the Orchard” make the dishes even more tantalising. A word of advice though – make sure you go hungry. 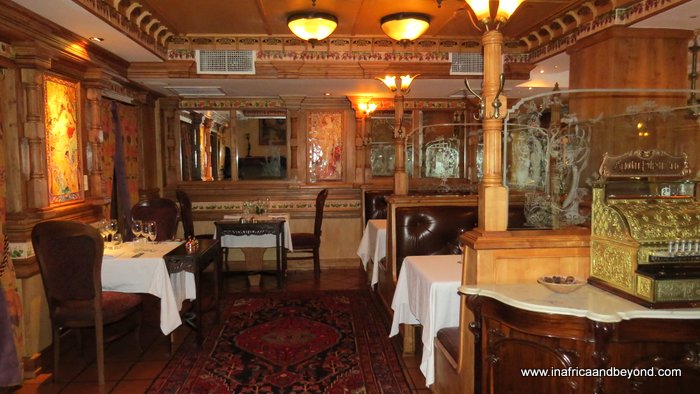 After a sumptuous breakfast the next morning, it was time for us to leave this mesmerising sanctuary. It was a welcome escape from reality. For me, it was also a nostalgia-tinged visit as the hotel evoked memories of my trips to Marrakech, Istanbul and the Moghul and Rajput palaces of India. 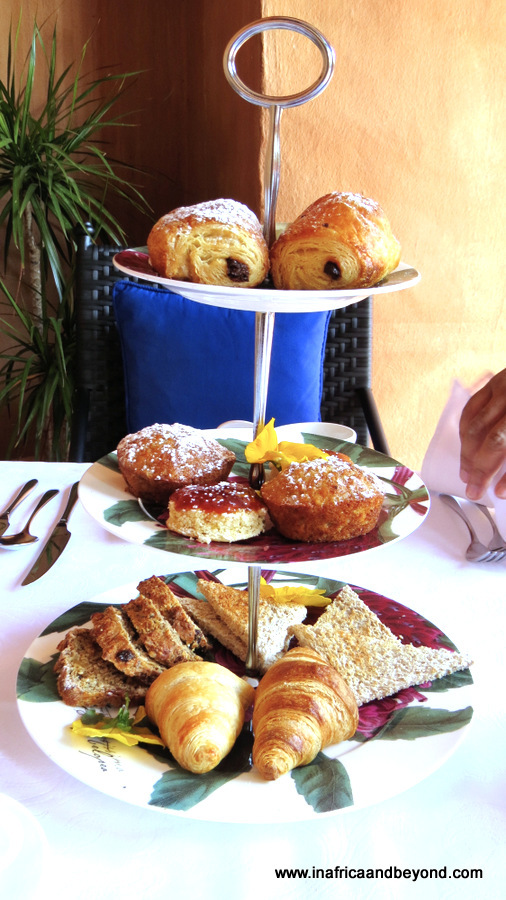 For more information, visit The Orient Hotel or book here. 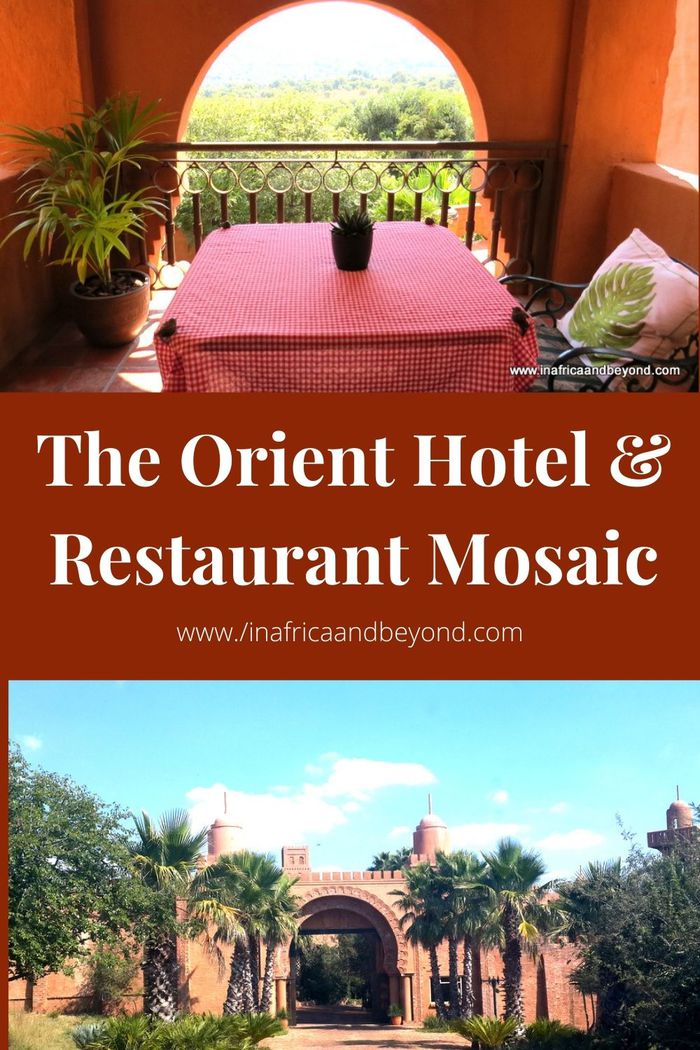 One comment on “The Orient Hotel and Restaurant Mosaic”