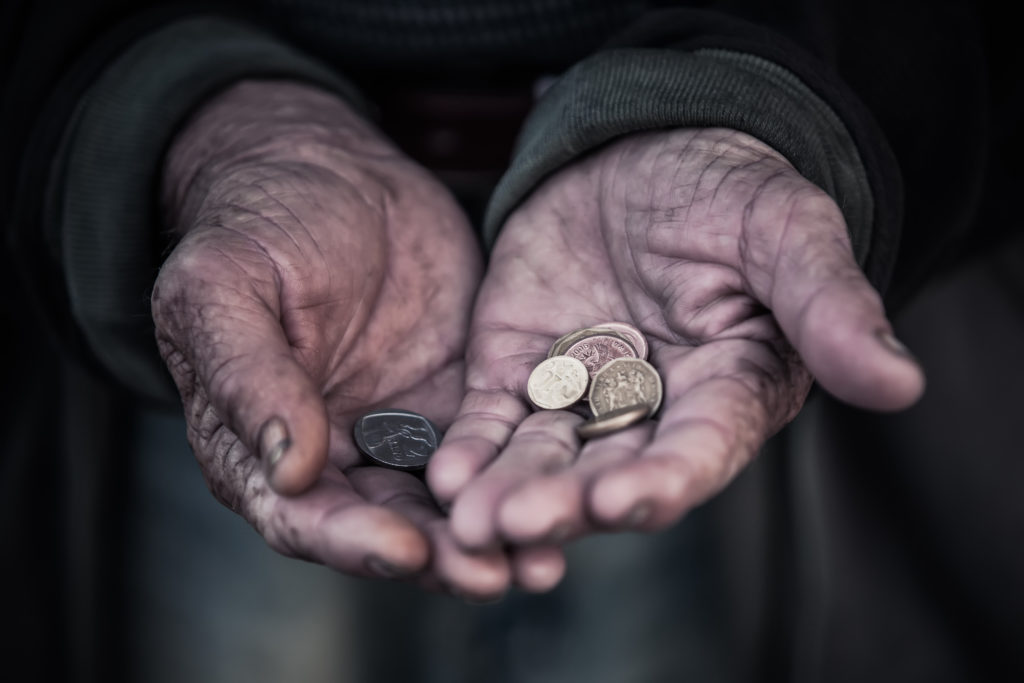 Beggars are an unfortunate reality of many third world countries, and some first-world countries too. They can be discreet, demanding, precise or persistent, depending on where in the world you are. There are those with disabilities, often purposely inflicted for the very purpose of begging, (cunning) little children with puppy dog eyes (and wily ways), and those that try to use humour to make people give them money.

Ever seen a sign that said “Need money. Want to go partying”, the one about “6 wives and 20 kids to look after” or the one about “Criminology is not my major”. Also there are the sneering ones who look down on what you give them and demand more.  Or follow you…and harass you until they get what they want.

There was once a beggar who came to my house every day. He would ring the doorbell persistently until he was attended to. He knew exactly what he wanted –one day, he would ask for chicken livers, the next day, a present for his daughter on her birthday and the third day, transport money to travel from Johannesburg to Port Elizabeth (a city in South Africa’s Eastern Cape province). If you didn’t have what he wanted or told him to come back later, he would walk off cursing you. To be fair, he was mentally unwell.

My husband is a soft target for beggars. He can’t say no to them. This drives me crazy because giving one some money – in many countries -  attracts droves more. In a matter of seconds, you could be surrounded by a crowd and unable to move. This is a genuine fear I have since it has already happened to me.  He was once encountered by two female beggars in Jordan that assured him that they didn’t want money, just some food that he should buy for them from the nearby grocery store. They proceeded to buy luxury items like olives and olive oil. (They were middle-Eastern, after all).

Another two women in Mumbai accosted him with the same story and proceeded to buy a whole month’s worth of groceries.  In Morocco, he was jumped upon by two little girls who dumped a flower in my hands then proceeded to harass him for money. He gave them some but they continued to follow him to our hotel until I reprimanded them. In Saudi Arabia, we heard umpteen tales from people who claimed to have lost all their money there and just needed some to get back home to the South-Asian subcontinent. 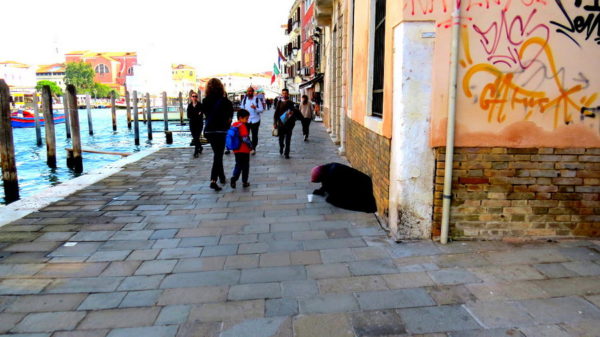 A little boy looks at an old woman begging in Venice

However, nowhere in the world that I’ve been to are the beggars more persistent than in India. Having spent some time there in my formative years, I had witnessed how aggressive they can get.

We were once accosted by a beggar in New Delhi –a dirty little boy who must have been around 10 years old. As we alighted from our taxi, we gave him some money then entered the monument we had come to see. On leaving the monument, he accosted us again. We told him that we had already given him money and entered our taxi. Refusing to accept this, he began following our taxi, which couldn’t move fast anyway because of the choking traffic there. As the taxi picked up speed, he jumped on the trunk and started banging our back windscreen.

Every time the taxi stopped at a traffic light, he would alight and start banging our side window more vigorously. When the car started moving again, he would jump on the trunk again. Eventually we managed to shake him off. On another occasion in New Delhi, my husband gave a beggar money and before we knew it, our car was surrounded by at least 10 others and we couldn’t move – for a while.

I heard about a beggar in India, an elderly man, who would hang around religious institutions and ask for money. He was a well-known face in his parts and had a trademark sack slung over his shoulder. One day, it was discovered that his sack was full of money as well as a bank savings booklet that proved that he was actually quite rich. When asked why he was begging when he was so rich, he replied that he had been driven out of his home many villages away, by his abusive wife and children and he much preferred this way of life.

Of course, I feel sad when I see little kids begging with their parents, getting accustomed to that way of life. And when I see hunched old ladies begging in crouched positions in Venice and even London. And I do give charity when I feel that the need is genuine. But the truth is that there are many beggars who just spin whatever tales they need to, to tug on tender heartstrings. There was a time when begging was a last resort for the unfortunate.

Now, sadly, it is a first resort for many trying to make a quick buck. Often, beggars use the money given to them to buy drugs and alcohol. I’ve heard of those that hire children for the day and those who pretend to be blind – all in a day’s work. In India, I’ve heard of beggars actually breaking the limbs of their babies when they’re born so that people will feel more sympathy for them. Is that not the height of cruelty?

I know people who have provided beggars with goods to sell and tried to set them up in trading businesses – so that they can make an honest living - but that was too much of an effort for them and they were begging again in no time.

It is normal to feel sympathy when seeing beggars. But in my opinion, giving them money perpetuates the culture of begging. It would be better to give your money to a charitable organisation that educates them and helps them to empower themselves.

Have you ever had any bad experiences with beggars? Tell me about it below.

14 comments on “Beggars around the world”